YOU Are Elon Musk!

We had a family get-together yesterday and, at Maya's insistence, we played' Elon Musk's iPod Submarine'. All afternoon.

I've posted the game here before, but here it is again. It's pretty simple: 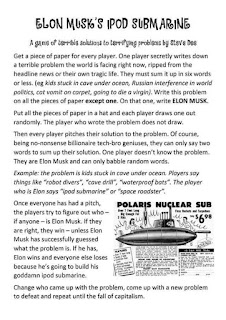 We played with seven people, although Michelle dropped out about halfway through for a nap.
We took full notes of every round, but I'll just summarise each one. It should give you an idea how a full game flows.

This was an obvious one for someone to choose, all things considered. Solutions included 'Godzilla Deadlift', 'Tesla Magnet' and my wonderful 'Sonic Submarine'. Elon Musk (Catherine) chose 'Aquatic Transporter'. I thought that she was Elon Musk. Everyone else thought that I was Elon Musk and voted accordingly. Round One to Elon Musk.
Problem 2 - 'Cowbell' Video Not Available On YouTube

This came out of our earlier discovery that the classic 'More Cowbell' sketch from SNL is not available on YouTube.

Solutions proposed included 'Online Petition', 'Musk Tube' and a 'Rural Fieldtrip'. Elon Musk (Maya) jumped in with 'Advertising Campaign', but when pressed couldn't suggest what for. we exposed them and they failed to tell us what the problem was, so the players won.
Problem 3 - Sir Digby Chicken-Caesar On The Run In Wollongong
This was also based on our earlier YouTube investigations, watching old Mitchell and Webb sketches. It also showcased Cei's inability to understand what a problem of six words or fewer looked like.

Anyway, some of the solutions were 'iPod Police', 'Cigarette Cage' and 'Bluetooth Shelters'. Michelle was Elon Musk and went for 'Sonic Screwdriver' (Cei has been making her watch a lot of 'Doctor Who' because apparently they don't have it in Indonesia, where she comes from). We all spotted she was Elon Musk, and she had no idea what the problem was. Another win for the players.
Problem 4 - Cei Trapped In A Haunted House
This was Michelle's revenge for Cei's obscure Sir Digby Chicken-Caesar problem in the previous round.

The solutions for this were a bit weak. Obviously we felt that Cei being trapped in a  haunted house was no bad thing. I did suggest 'Proton Packs' though. Catherine was Elon Musk and leaped in with the random 'Pringles Tubes'. She was quickly exposed for another player win.
Problem 5 - Too Many Leaves Not On Trees
That garbled english was Catherine's contribution, but we weren't sure if the problem was (i) too many leaves on the ground or (ii) a lack of leaves on the trees. Our solutions covered both, and ranged from '3D Paint' and 'Strong Glue' to 'Giant Earthworms'. Elon Musk (Satvik) felt that 'Intelligent Stitches' were the answer. We weren't convinced and he failed to tell us what the problem was. Yet another player win.
If the problems are obscure then Elon Musk has a difficult time in this game.
Problem 6 - Nothing Blocking Suez Canal
Obviously a problem for the makers of high-engagement memes.
This produced a great set of solutions: 'iPod Submarine', 'Proto-Divers', 'iWall', 'Canadian Pondweed', 'Less Roughage', 'Add Fish'. Can you spot Elon Musk (Maya - again)? Yes, that's right - the 'Proto-Divers'. She failed to deduce the problem, and we, the players, won again.
Problem 7  - Pringles In Tube Have Run Out

Yes, we had eaten our way through the first lot of table-snacks.
Solutions covered 'Multiple Copies' and 'Inbuilt Replicators' to 'Unlimited Refills' and 'Timelord Technology' (Michelle really has watched a lot of 'Doctor Who' recently). Maya was Elon Musk again, and went for 'Transporter Accidents'. She actually came close to guessing the problem though, but  we didn't feel she was close enough, so we called this round a draw. And got more snacks.
Problem 8 - Must Convince Everyone You're Elon Musk
This isn't really a problem, but we ran with it.

I dived in with the unintentionally punny 'Elon Mask'. Satvik played the problem properly with 'Submersible iPod'. Cei tried 'Musk Spray' and was accused by everyone else of being Elon Musk. He wasn't. It was Catherine's 'Genetic Manipulation' that was Elon's contribution. So Elon Musk won this round.

Problem 9 - Time-Travelling Nazis
We tried to switch to simpler problems, to give the Elon Musk player more of a chance. My favourite solution was Cei's 'Inglorious Basterds'. Other suggestions included 'Anti-Time' and 'The Doctor'. Catherine was Elon Musk and chose 'Date Manipulation'. We exposed her, and she failed to pick up on Cei's reference and couldn't quite pinpoint the problem. A player win.
Problem 10 - World Pasta-Shortage
My son eats a lot of pasta, and decided that this could become an issue. 'Soylent Society', 'More Machines' and 'Super Cei' were the bizarre solutions proposed. I was Elon Musk in this one, and went for 'iPod Engineering'. However the discussion hinted that it had something to do with Cei eating, I guessed it was about a food shortage, remembered his love of pasta, and correctly guessed the problem for a Musk Win.
Problem 11 - Porridge On Your Shoe

This was my wife's random contribution. The best solution was 'Tiny Dogs'. I was Elon Musk again, and failed to work out the problem, suggesting 'Bluetooth Collars' and being quickly exposed.
Problem 12 - Space Ghosts
Obviously my 'Space Pacman' was the best solution! Maya proposed a 'Space detective' who would investigate and find out why the ghosts were haunting space and lay them to rest. Cei went for 'Atom Bomb'. But he wasn't Elon Musk. That was Catherine, with 'Solar Sieve'. We worked out who she was and, again, she failed to identify the problem.
Problem 13 - Choosing Baby Names Is Hard

This is a big thing in our family at the moment, since Michelle (and Cei) are expecting. And later this year I will be a grandad!
Anyway, some of the solutions proposed were 'Buzzfeed Quiz' (my favourite), 'Name Bros' and 'Libraries'. I was Elon Musk (again) and opted for 'Techno Fonts'. I was easily exposed, but somehow worked out what the problem was, for a second win as Elon Musk.
So I claimed overall victory, since I'd won as Elon Musk twice by guessing the problem after being exposed. Elon Musk won four rounds, and we had one draw.
Thanks for reading this far, and thanks to Catherine, Satvik, Henri, Maya, Cei and Michelle for an entertainingly stupid afternoon.
Posted by Kaptain Kobold at 08:48