For A Few Billion Suns More

Caesar and I played 'A Billion Suns' last night - his first go at the game. I took the time to explain the rules, because it's a game that's unforgiving of early mistakes, but eventually we got set up and started.

I chose to play at Scale 4, which actually made a real difference to how the game flowed compared to the Scale 3 games I'd played with Catherine. We ended up with three tables, and I broke out my new black cloths (which I may decorate at some stage, but are good enough for now. With one exception). The tables were 2' x 4' and two 3' x 2'. Contracts were the lucrative Rhexis Harvesting, Demolition and Mining. The big table had a couple of asteroids and three facilities, Table Two had the Pearl, an asteroid and a facility, whilst Table Three had a single asteroid. 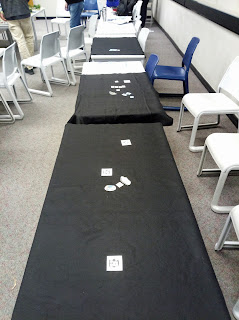 The problem with the black cloth? It really confused my phone's camera sensors, so the photos were appalling.

Here's Table Two, with the Rhexis Pearl in the centre. This contract can be easy to score, so we both committed ships to it; I went for medium utility ships on the hope they'd weather the storm around the Pearl better than the Caesar's more numerous light utility ships. 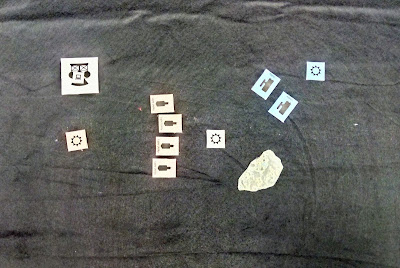 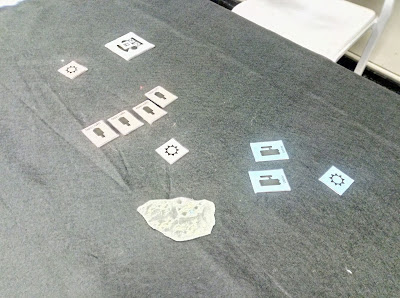 On Table Three I sent in a single utility ship to mine the asteroid there. Caesar responded by jumping in a flight of fighters. He planned to use them to soften up the asteroid, hoping to jump one of his utility ships from Table Two in later to pick up the ore. There's a limit on how many utility ships you can have in play, and all of Caesar's were committed to the Pearl.

Of course what happened is that his fighters blew up my utility ship. 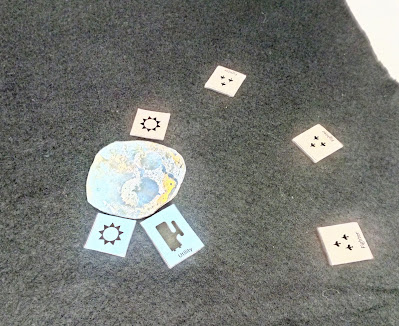 He also jumped in fighters on Table Two, and took put my utility ships there. This gave him uncontested access to the Pearl on the first round of the game. 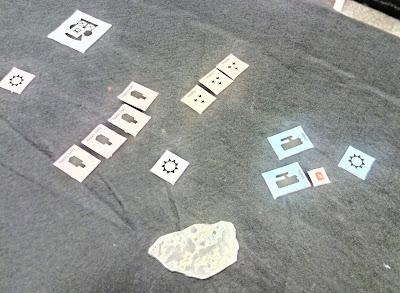 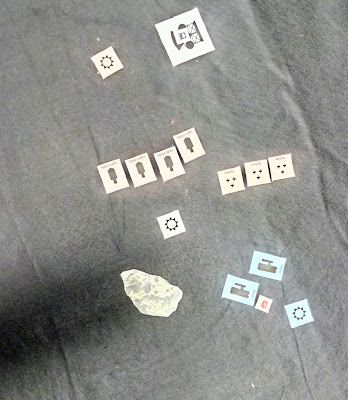 I didn't take any photos after that. I jumped in replacement ships on Table Two, and managed to contest the Pearl on round two, but Caesar managed to get the crucial catalyst and scored the whole contract himself. There was a fair bit of fighting involved though; I sent in some gunships to take on his fighters, and they scored a reasonable amount of damage on them, leaving him with only one wing. However the gunships were lost too. They successfully covered the crucial utility ships though.

On Table Three I tried to mine the asteroid again, but the fighters there saw me off.
Caesar was the only one to start on Table One, sending a single bomber wing, with powerful torpedoes, to soften up the asteroids there. However he switched to the facilities when he realised that the Mining contract wasn't likely to pay out by the end of the game.

The thrid and last round of the game saw a flurry of activity around the facilities, as blowing them up was the only viable source of revenue. I sent in a few fighters, but didn't manage to destroy any of them. Caesar jump-hopped his fighter from Table Three to Table One, and used them to take out one facility, whilst his bomber wing took out a third. Finally his fighters destroyed the facility on Table Two, to give him a near clean sweep on that contract too.

Anyway, Caesar's company ended up with a tidy profit, and I made a massive loss.

Basically I under-committed on the first turn, and suffered for it, having to spend the crucial second turn trying to get back into the game. The Rhexis contract seems to be a key one to go for, since if you can get it the payout is straightforward. It becomes difficult if it is contested, though, and can be a bit of a gamble. Caesar's use of fighters was masterful; he had just enough to achieve what he wanted, and positioned them to make any movements by my ships dangerous due to reaction fire.  So it was a well-deserved win for him, in his first game. And I need to remember to spend more at the start.
Posted by Kaptain Kobold at 09:55