We visited our friends for lunch on Easter Monday, and I taught some of them how to play Flamme Rouge. It was the first time I've played it with four human players, which was fun.

We picked a basic course to start with; just a couple of minor hills and a sprint-finish. Claudia (Black) went a bit wild at the start, and ended up way out in front, accumulating exhaustion cards. The rest of us played more cautiously. 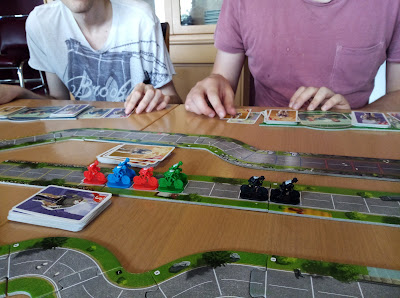 We did the first climb and descent, and that caused the pack to close up a bit, but one of Claudia's cyclists was still out in front, and I (Red) tailed her. 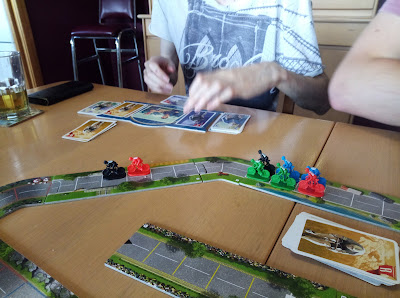 Despite her exhaustion Claudia managed a win, and despite my carefully managing of cards for a final sprint I just scraped a second place. 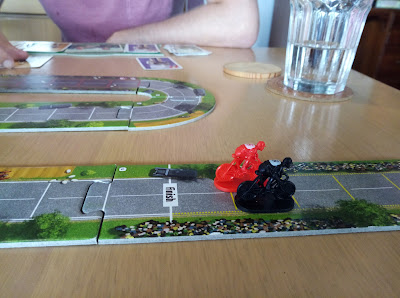 We set up another game, with a fiendish long climb to the finish. Claudia was more cautious this time, whilst Marco went into an early lead. I got stuck at the back. 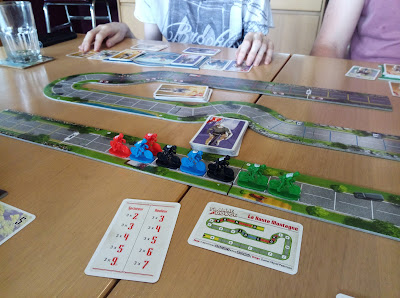 The climb to the finish made overtaking very difficult, since the cyclists generally move at the same speed on climbs and we had all done a good job preserving cards in our hands to ensure that. It was Marco's green cyclist who won it, closely pursued by Eric's two blue riders. I came in fourth. 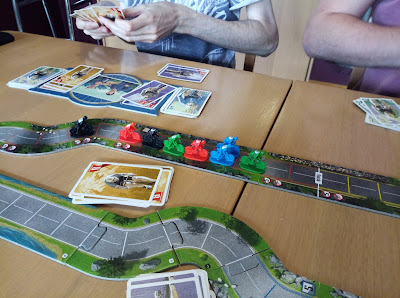 Whilst the AI teams are useful to give you a full game with only one or two players at the table, it was a lot more fun as a game with the full complement of four. I need to find a copy of the Peloton expansion, which takes the game up to six players.