I've had 'Blood, Sweat and Cheers' out again this weekend because, if all goes well, I will be running it as a demo/participation game at a local show in a couple of weeks, and I want the game solidly ensconced in my head before I do so. I thought I'd run through another campaign, similar to the one I ran last year, and using the rules HERE and HERE (which are basically the rules in the 2nd Edition of the game, with a few tweaks of my own - mostly to do with weight classes).

Once again I set up three lanista - Primus, Secundus and Tertius, and randomly selected four gladiators for them - one each of light, medium and heavy and a fourth of any weight. 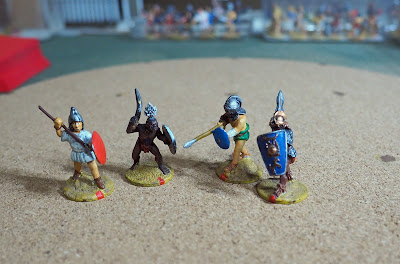 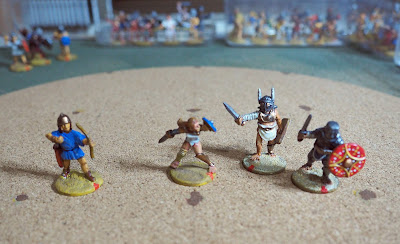 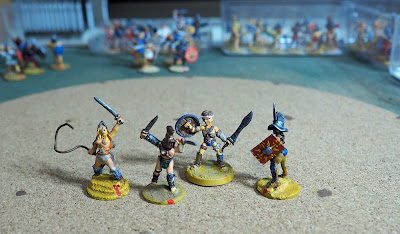 I used the system where each school was restricted in their initial pick of gladiators by the whim of the Editor. For the first round, Primus had to put forward a light gladiator, and chose Publius, Secundus their least experienced gladiator, with a random roll selecting Victor and Tertius being allowed a free choice and going for Varica.
The matchups were a free choice, and I ended up with the following pairings: Publius vs Hermes, Alba vs Victor and Varica vs Ombos. 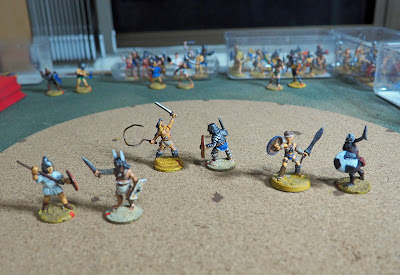 Round 1 - Bout 1 - Publius (Veles) vs Hermes (Murmillo)
The games started with a classic light vs heavy matchup as the nimble veles Publius faced the murmillo Hermes. Publius got great cards from the start and was able to dodge his slower opponent whilst throwing javelins at him. 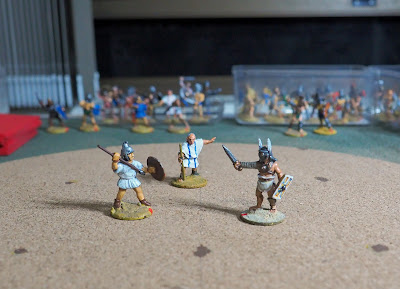 With the crowd behind him, the veles got more confident, and went toe to toe with the murmillo. Hermes was on the back foot the whole bout and was quickly defeated.
With the crowd solidly behind Publius, mercy was unlikely, and Hermes' career was over.

This gave 2 Prestige to Primus, and Secundus would need to find a new gladiator. 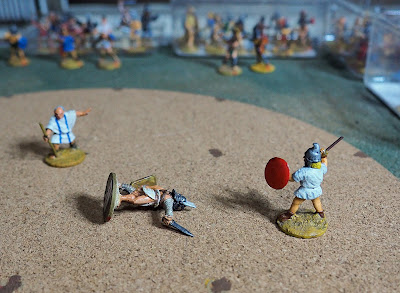 Round 1 - Bout 2 - Varica (Barbarian) vs Ombos (Thrax)
For those that are wondering, a 'Barbarian' gladiator is basically a murmillo with a lower defence and a higher speed.
Varica closed quickly and a fierce sword-fight ensued. Both gladiators took flesh-wounds, much to the delight of the mob.
Ombos was knocked down, and a win for Varica looked likely. But the thraex had fight left in him and managed a vicious crowd-pleasing slash from the ground to wound Varica and buy the time to stand up. 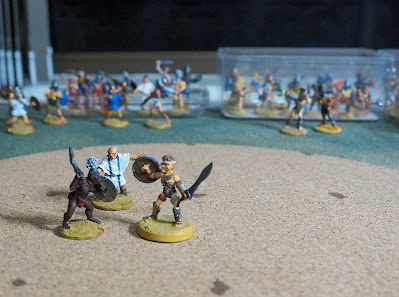 Ombos pressed his advantage, and soon defeated Varica. However they had put up a good fight and the barbarian was spared by the crowd.
This gave Primus another 2 Prestige, whilst Tertius picked up 1 Prestige for Varica's having survived. 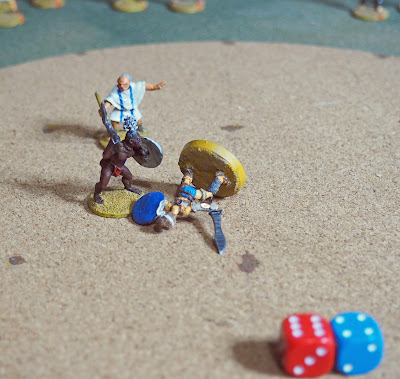 Round 1 - Bout 3 - Victor (Crupellarius) vs Alba ('Cestus)
This was the very end of the extremes in terms of a matchup, with the heaviest gladiator allowed fighting the lightest. However Victor went in hard from the start, and Alba couldn't get her act together when it came to evading her heavier opponent. 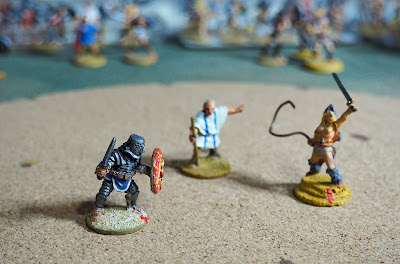 A couple of wounds early on saw Alba slowed, and as she tried to evade across the arena in order to buy herself some breathing-space, Victor caught her with a passing blow and she collapsed, defeated. 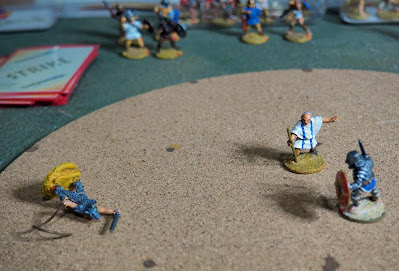 So at the end of Round One, this is how the three schools stood: