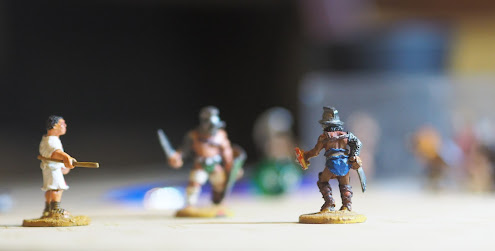 One of the fun parts of gladiator games is following the careers of one or more fighters in some kind of simple campaign structure. I put together a simple multi-player campaign for our own rules 'Munara Sine Missione' many years ago, and thought that its basic structure could be adapted for 'Blood, Sweat and Cheers'. This is what I've come up with so far, although I haven't tried it out yet:

'Blood, Sweat and Cheers' - A Campaign

Each player runs a school of gladiators, and is trying to gain the most Prestige.
Gladiators are classified as Light, Medium or Heavy

Light - Any gladiator with a base Speed of 4+, except the thraex

Medium - Any gladiator with a base Speed of 3, plus the thraex

Heavy - Any gladiator with a base Speed of 2 or less.

Each player chooses a stable of four gladiators. There must be at least one of each weight. There may be two of a particular type.

Each school starts with a Prestige of zero.

The campaign is played in a series of Games. In each Games there will be one Bout per player in the campaign.

The Games are set up up by each player selecting a gladiator from their stable. Players should do this in order of Prestige, highest to lowest (roll off on any ties).

Then in reverse order, players select a second gladiator from their school to fight an opposing gladiator. The two gladiators must be of different types. In addition a light gladiator cannot oppose another light gladiator, or a heavy another heavy*.

This should give one Bout per player in the campaign, with each player fighting in two Bouts.

Fight each Bout in turn.

At the end of the Bout check the following:

See if the defeated gladiator is granted missio according to the rules. If they are not, they are removed from play, and the player must select a replacement of any type, so long as there are still at least one each of a Heavy, Medium and Light gladiator in the school.

Whether they won the bout or not, if a player ends with a positive Crowd Favour score, roll a D6 and add the Crowd Favour. If the score is 6+, then the school gets one Prestige for good publicity.

The player who won the Bout gets 1 Prestige.

Gladiators gain experience according to the rules. If they survive two Bouts (win or lose) then they may add one to a single attribute. Note that for the purposes of determining their weight class it’s the original Speed which matters. So an experienced holplomachus with a Speed of 4 still counts as Medium

If a gladiator survives 5 Bouts then they receive the rudis and are freed, and their school immediately gains 2 Prestige, but must replace that gladiator.


The campaign ends either when a school reaches a pre-set Prestige target, or after a certain number of Games, at which point the school with the highest Prestige is the winner. *This is really for the aesthetics of the fights, to creating interesting bouts between opponents with different styles. Ignore it if you just want.