The Prestige totals were now such that in this, the fourth round of the campaign, Primus could win. To do this, though he had to win both of his bouts.

This gave the following matchups: Publius vs Hipployta, Victor vs Ombos and Albia vs Artemisia. Primus had both of his big guns out, intent on a win. Obviously if they were taken down that would mean extra Prestige for Terius and Secundus. 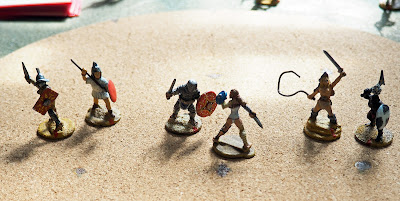 Round 4 - Bout 1 - Publius (Veles) vs Hippolyta (Murmillo)
Publius had come unstuck in his previous bout for getting in too close and personal with a murmillo, so opted for a a safer approach in this bout. And it worked. The Glory cards trickled in steadily, and he was able to keep out of Hippolyta's reach and throw his javelins. The first nearly ended the bout, but Hippolyta evaded disaster with a Fortuna's Favour card. 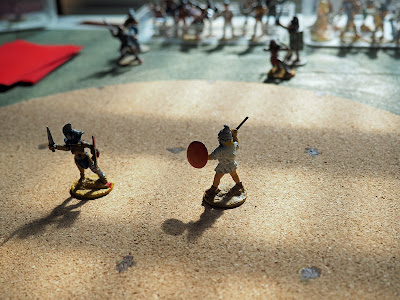 However the next javelin saw her knocked to the sand, and a third throw finished her. The crowd were merciful, though.
This gave Primus 2 Prestige. Hippolyta earned 1 Prestige for Tertius. Primus was nearing victory. 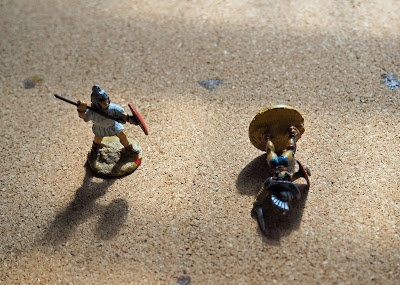 Round 4 - Bout 2 - Victor (Crupellarius) vs Ombos (Thraex)
Could Ombos cut his way through Victor's defences in order to win the campaign for his lanista? Only the cards and fates knew. 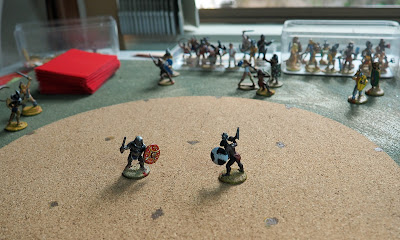 Both gladiators got stuck in, using the basic Glory attacks - Victor trying to knock his opponent to the floor and Ombos trying to wear him down with laceration attacks. It was a long fight and both gladiators ended up wounded. 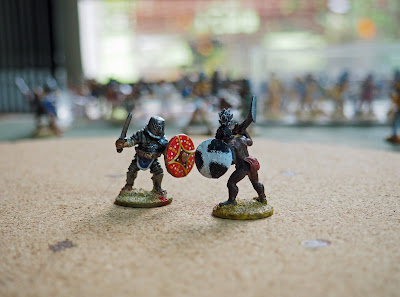 However eventually Victor's luck ran out. A poor had of cards saw him forced to rely on his speed in defence, and that's not good for a crupellarius. Ombos exploited it and Victor was defeated. Despite the epic fight the crowd were disappointed and didn't grant any mercy.

I suspect that it was because they'd be cheated of another round of the campaign; Ombos's win meant that Primus now had the 15 Prestige needed to win the campaign. 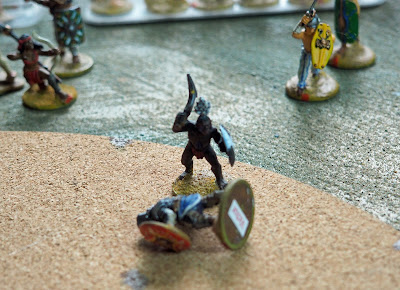 However there was still one bout to play out.
Round 4 - Bout 3 - Albia ('Cestus') vs Artemisia (Thraex)
This looked like it would be an interesting fight of maneuver from two relatively light gladiators. 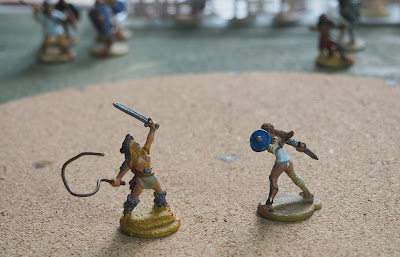 In fact it ended quite quickly - Artemisia managed to trip Albia, and then a crowd-pleasing slash of her sica wounded her opponent, who asked for mercy.

The crowd granted it.
Albia scored 1 Prestige for Tertius, whilst Artemisia picked up 2 Prestige for Secundus. 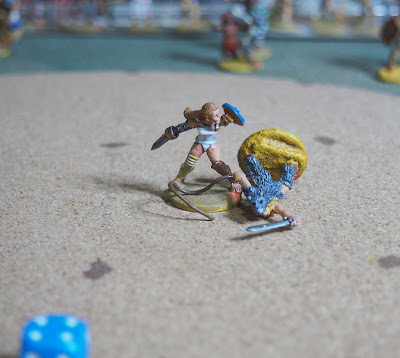 The Winners - The School Of Primus 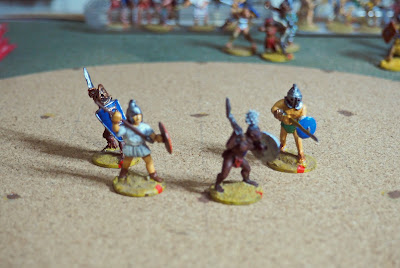 Albia ('Cestus') - 2 Bout
Hipployta (Murmillo) - 2 Bout
Bregans (Barbarian) - 1 Bout
Danaos (Hoplomachus) - No Bouts
As you can se, Primus only lost one bout, whereas Tertius didn't win any. Secundus did OK on wins, but didn't have the crowd's support when it came to losses, which cost him Prestige for surviving a bout as well as the chance of experienced gladiators.
Posted by Kaptain Kobold at 09:15