It was my birthday recently, so Catherine and I went away for a couple of days. As ever I took a pile of games with me, but in fact we ended up only playing one of them. This was our first go at the 'Marrying Mr Darcy' expansion, 'Emma'. 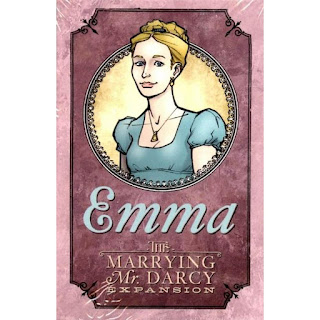 'Emma' uses the character cards from the original game, as well as the base rules, but has its own set of heroines, suitors and event cards geared, obviously, to the book of the same name. As befits  the different storyline and angle of the book, there are some new types of event cards in the game - matchmaker cards allow players to control the eligibility of suitors, blunders disadvantage heroines, revelations may offset blunders (or provide other advantages) and you can improve yourself, or others, by means of a good gossip. There's more scope for helping and hindering other players than in Marrying Mr Darcy. It's designed for up to six players (the original game is for eight)

The two-player version doesn't use the full event deck and, obviously, limited inter-player interactions as well. We played a couple of games late in the evening, which is why Catherine is in her cosy pyjamas. 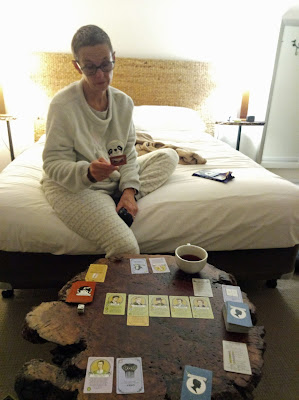 In the first game I had the sensible Anne Taylor, who can avoid blunders, whilst Catherine had the dim but well-meaning Harriet Smith. I managed to build up enough character to have a pick of suitors, whilst Catherine never really got to grips with Harriet. I married well, and Harriet ended up as an old maid, to give me a win.
In the second game Catherine had meddlesome snob Augusta Hawkins, who can 'improve' other characters by swapping her character cards for theirs. I had the poor Miss Bates, who can pick up discarded character cards as charity, and also gets a bonus for ending the game as an old maid, making it a viable strategy. Anyway, Miss Bates just blundered into one social faux pas after another, and was never going to marry at all, let alone well. Augusta played a sensible game, and made a good match, to give Catherine a win.

I'm looking forward to trying the game with more players so we can see how the interaction elements work.
Posted by Kaptain Kobold at 09:32