Return Of The Jedi

In 2002, MB Games released a neat little Star Wars tie-in boardgame called Epic Duels. Although t went out of print in 2004, it acquired a small following and minor cult status.

In its basic two-player form, the players chose one of a set of characters that come with the game. One chooses one of the six Light Side characters and the other one of the six Dark Side characters. The characters available span the original trilogy, and the first two of the prequel trilogy. Yes, it is possible for Anakin Skywalker to fight Darth Vader. Each character has one of two supporting minor characters - Han Solo has Chewbacca, for example, whilst Obi Wan Kenobi is supported by a couple of Clonetroopers. In addition each character has their own deck of cards, which is used to drive combat and their special abilities. Like a lot of good games the mechanisms are simple, and it is the unique card decks which drive the game and make for the different interactions. You win by killing the opposing major character; the other characters are just fodder, although the mechanisms do have a incentive for you not to just kill them straight away.

I'd not played the game for many, many years; certainly not since we came to Australia, and probably for a good few years before that. I'd taken it off the shelf a couple of weeks ago as a possible option for New Year, and it had been sat taunting me ever since. So last night I arranged to play it with Caesar's son Kaleb, who has started coming along to our Thursday evening sessions at the ripe old age of 10 (nearly 11 though).

We set up the suggested starting pair of Count Dooku vs Obi Wan Kenobi. I played the baddie.

As you can see the game is played on a square-grid. There are four board included with the game, each based on a scene from one of the films, and each offering some limitations in the way you can move or shoot. 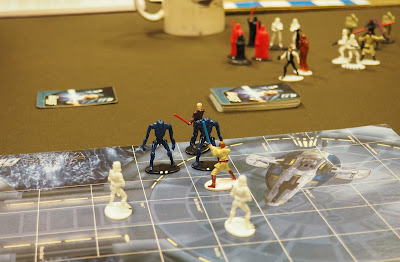 The game also comes with 31 pre-painted miniatures. The quality of the pre-paint isn't brilliant but I've never bothered doing anything about it.

Obi Wan and Dooku got stuck into each other pretty quickly, but I had the cards to support the Count with his super battle-droids and the Jedi was soon worn down and defeated. Indeed it was one of the droids which finished him off. 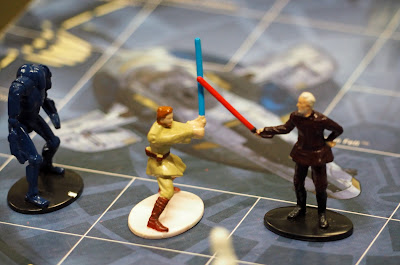 In the second game Kaleb chose Luke and Leia, whilst I wet for a non-Jedi pairing - Jango Fett and Zam Wessel. The latter, minor, character has some useful assassination skills, and it was those which ended the game fairly quickly for the Skywalker twins. Kaleb got a bad draw of cards which gave him a ton of non-combat special abilities, but little in the way of defence. Zam Wessel simply shot Luke down, assisted by a few neat tricks from the bounty hunter. 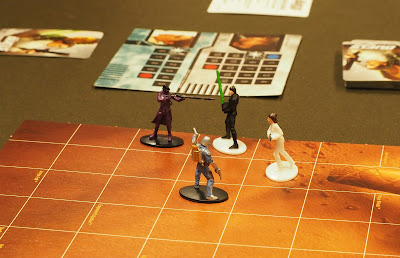 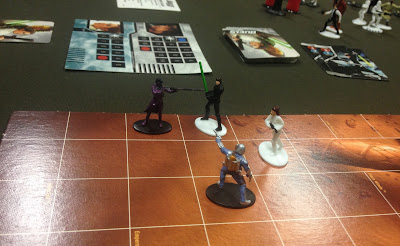 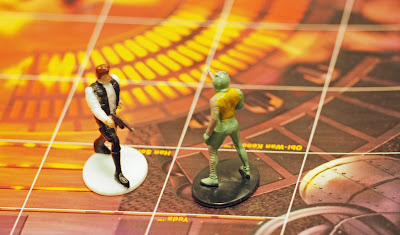 Chewie provides the heavy combat support in this pairing, but it wasn't enough to prevent Boba Fett knocking out Han with a long-range shot. 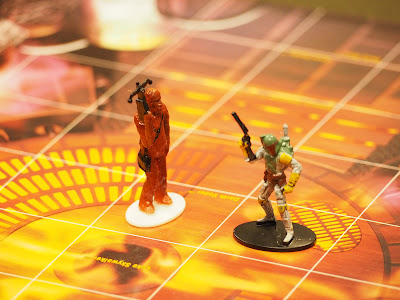 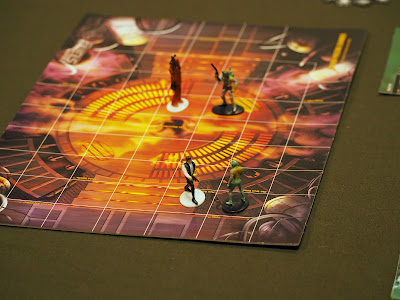 And so to the final duel of the evening. Kaleb had got the hang of the game now, and looked through the decks deciding who he fancied trying based on their card options. I just went with my heart - I wanted to be motherfuckin' Samuel L. Jackson or, as he's known in the Star Wars universe, Mace Windu. 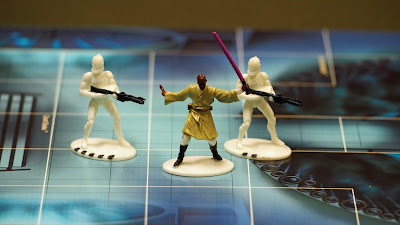 Kaleb went for Emperor Palpatine, who is an interesting combatant with a few special attacks, plenty of defence, some evil card-discarding abilities and offensive firepower from his Royal Guard. 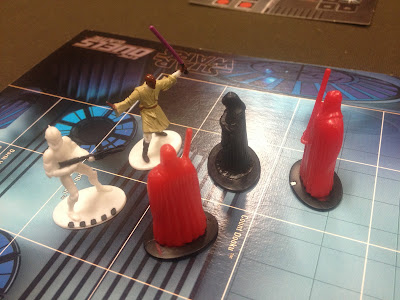 This was a long duel. Mace Windu has some great abilities, but needs to build up a decent hand to make the most of them. Whilst I danced around doing this, I got hit by evil force-lightning, and had soon lost plenty of hits. Eventually though, I got my act together, and was able to leap in for a trademark whirlwind attack, which destroyed both guards and severely injured the evil Palpatine. He rallied well, and I was soon on my last legs, but I finally put together another useful card combination which allowed me to zip across the board and cut the Sith down for victory.

I really enjoyed playing this game again after so many years, and I hope Kaleb did too. He was unlucky in a couple of games with his early card draws, but certainly got it together as the Emperor in the final game.

Other games were also on the go. We had to move into the posh office this week, as you can see. 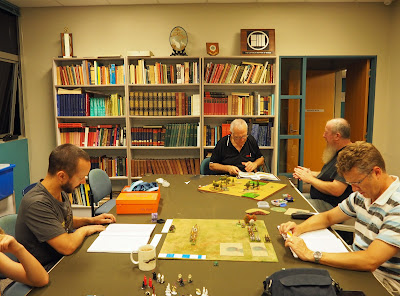 Caesar and Peter played a couple of late-medieval DBA games - Burgundian vs Swiss first, I think, followed by Burgundian vs Henry Tudor's English. The first game saw the Swiss defeated entirely by artillery fire, whilst the second saw Caesar defeated when he realised that he wasn't playing HOTT. 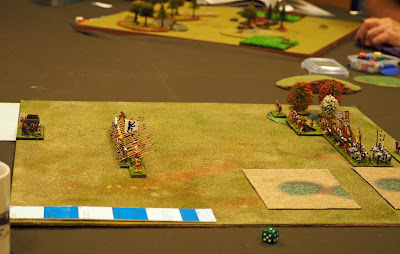 Gary and Bryan tried out Team Yankee (a sort of 1985-era Flames of War) using 6mm figures. Unless Ralph is reading this, in which case they were using 28mm figures and I took this picture from a long, long way away. 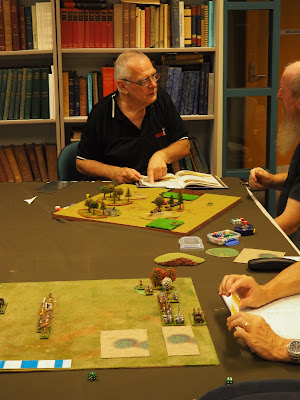 My kind of teeny-tiny game.
Posted by Kaptain Kobold at 09:05