I had a go at Giant Monster Rampage with Caesar last night. We had hoped to fit in a couple of games, but I've had PC problems so wasn't as prepared as I'd hoped to be, and Caesar had to work late, so we didn't have as much time as we hoped - or the third player, in the form of his son.

We threw together a quick attacker/defender game. Caesar had never played before. I used the basic GMR, rather than the newer playtest version, because I hadn't had chance to really play around with suitable designs for monsters. I did, however, bolt a few ideas and concepts based on the new version onto the game.

This was the setup. 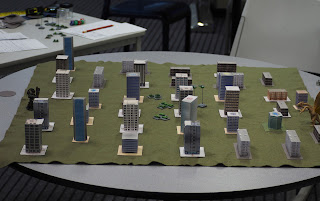 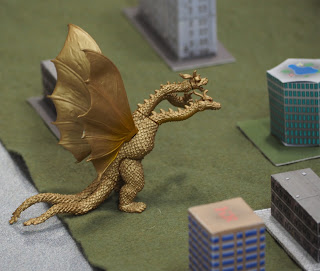 Caesar, being a bit of a fan of Pacific Rim, went for a Jaeger, called Gambler Diamond. 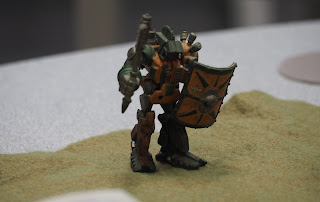 Gambler Diamond was powerful in close combat and defence but lacked any mobility abilities. Ghidorah was better in ranged combat, and could fly. The military would hinder both sides. I need to come up with a mechanism where the military doesn't hinder the defender quite so much, as with his lower mobility Gambler Diamond found his movement hampered by them far too much. 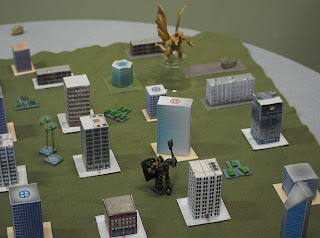 Ghidorah engaged in some initial building destruction, but intervention from the military made this harder to do, and he was eventually forced to move towards the advancing Jaeger. 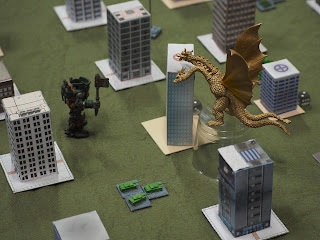 Hovering above a skyscraper he unleashed energy blasts on the mech. 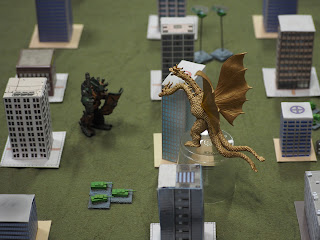 The monsters engaged in close combat. Ghidorah was knocked down, but quickly got up, grabbed Gambler Diamond ... 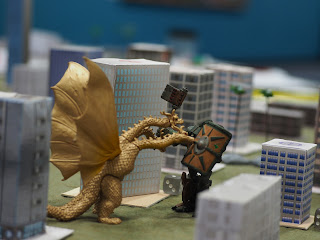 ... and threw him into a building, nearly destroying it. 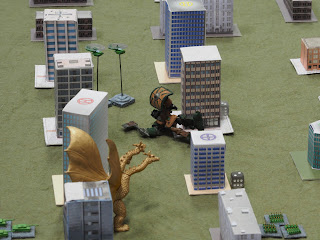 Ghidorah moves in for another attack. 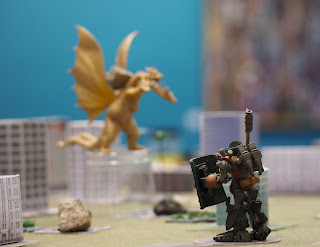 After an exchange of blows Ghidorah fled to another part of the board, whilst Gambler Diamond slowly followed. It was obvious at this stage that Gambler Diamond's design needs greater speed,

Eventually he caught up with Ghidorah again, just in time to have rubble hurled at him. 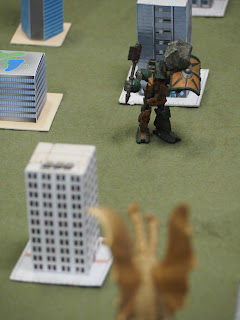 The Jaeger leaped into close combat, but Ghidorah grabbed him again ... 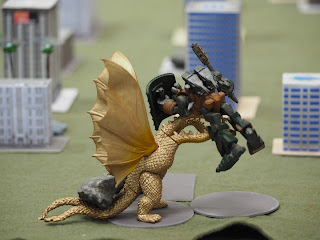 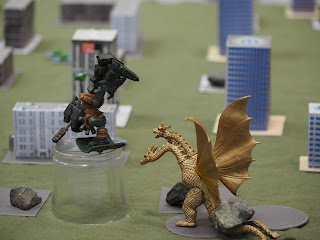 ... and threw him into another building. 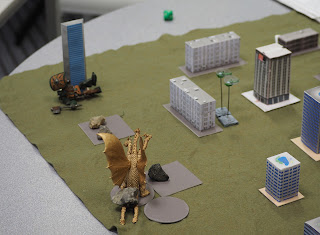 With that we reached the turn limit for the game. Ghidorah was, in fact, down to his last three wounds (of ten), whilst Gambler Diamond was about half damaged, having had good recovery rolls whilst running around the board trying to catch up. But Ghidorah easily won on points having demolished several buildings. Gambler Diamond needed to take Ghidorah down fairly quickly for a win, and failed to do so.

I need to properly document the changes we played, and give some of them more gameplay, but I have some comments to take back to the author. The way military units work - as a form of mobile blocking terrain and series of combat modifiers - was excellent, but poor on-the-fly scenario design meant that Gambler Diamond was more inconvenienced by the military than his opponent.

Meanwhile in the posh meeting room, Ralph, Bryan and John gave Team Yankee an airing. We didn't see a lot of this, but a short visit towards the end of the game showed a number of 1985 vintage tanks aflame, so it obviously ran pretty much as you'd expect. 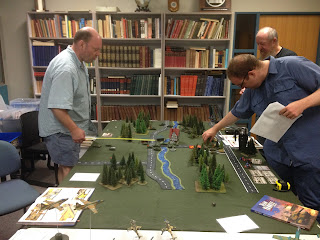