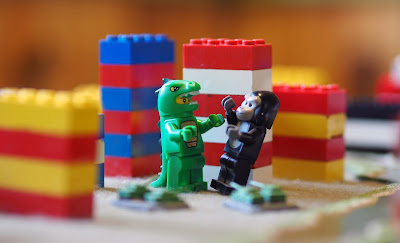 I was recently contacted by Ken of Radioactive Press asking if I'd like to get involved in playtesting a new version of Giant Monster Rampage he's working on. Called Kaiju Rampage (at present), this is something of a reworking of the original game if not from the ground up, certainly from the knees upwards. Ken has chosen to drop a lot of standard, core rules, rewrite them and integrate what used to be optional rules into the main game. He hopes that the end result will be a more streamlined game, and certainly I think that's no bad thing. The current system works pretty well, but has lots of odd rules scattered around and some areas where things don't hang together too consistently. Sometimes the interaction between certain abilities isn't obvious, for example. Another aim of the game is to decrease randomness and make the game a little more tactical.

I have read the rules through, and decided to give them a spin this afternoon, pitting two 200pt monsters against each other. Because they were to hand I used Lego minifigs - firstly Kong. 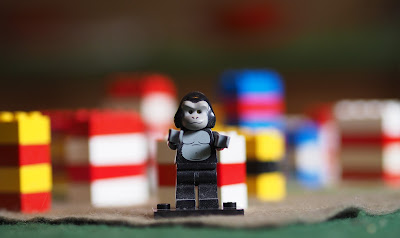 And secondly Godzilla - quite obviously a man in a suit. 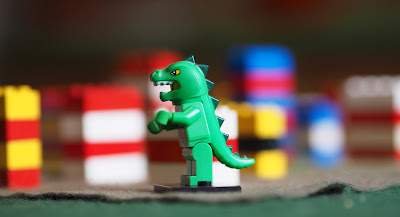 I returned to my Lego cityscape, because it better suited the figures in terms of look and scale. 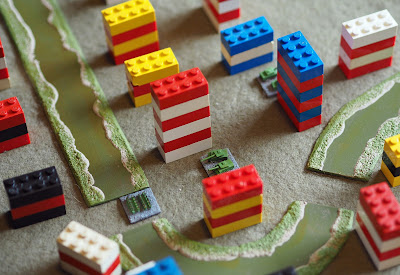 Because of the diminutive size of the figures I used a 16" square board, and converted all distances from inches to centimetres. As you can see above, though, the on-table military units (about which later) were my usual card and hair-roller jobbies. 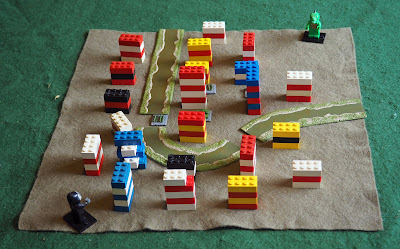 Godzilla started the ball rolling, using his atomic breath to partially destroy a skyscraper. I'd just set defeating an opposing monster as a victory condition, so building destruction was really just incidental. However I had destroying buildings generate rubble objects, which could be thrown, so added to the ranged attack possibilities. 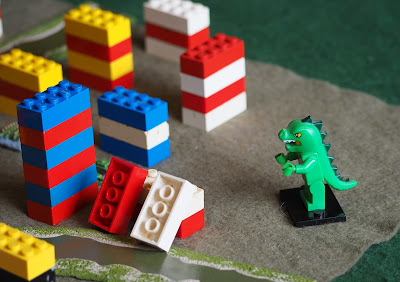 Kong bounded through the city. He was faster and more agile than Godzilla, but equipped entirely for close combat. To be honest monsters like that have always done well in GMR. 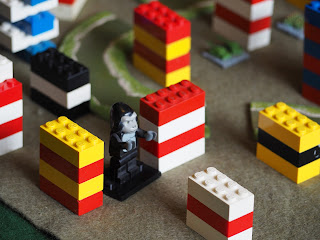 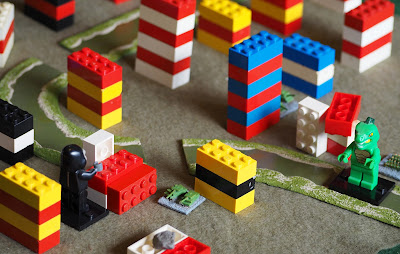 Kong threw a chunk of building at Godzilla, and hit him squarely, knocking him back over a military unit, which was destroyed. 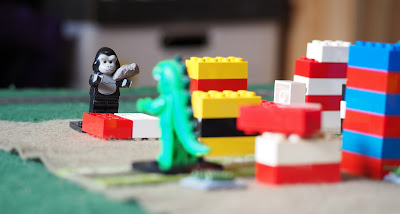 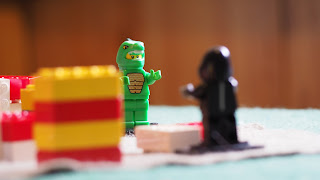 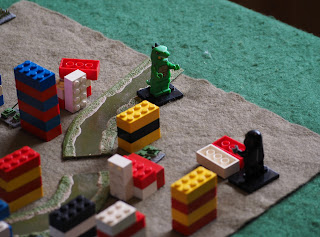 With a couple of hits scored on the big lizard, Kong moved in with his fists and his demoralising roar. 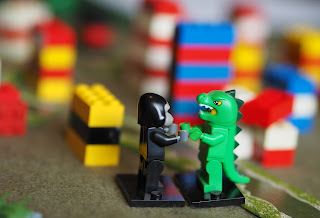 Over the next couple of turns he kept pounding Godzilla, who was constantly stunned and unable to effectively retaliate. 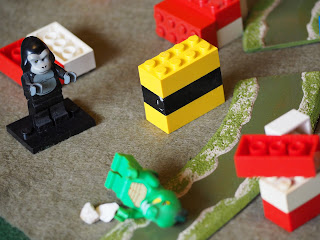 It was soon all over, with Kong triumphant. 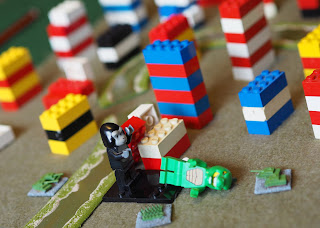 I know Ken is planning some changes to what he's set up already, so I'd be interested in seeing where they go, but on the basis of this one game I didn't feel that the rules had quite the same sparkle as the originals. I think that the aim of streamlining the combat abilities is a good one, and there are some good ideas to be had here, but I wasn't as happy with this version as I thought I'd be. True, I think that the balance of the monsters was off, but that's something I can test by perhaps trying the same setup but using the original rules (and suitable designs based on them). I shall report more as the project progresses, however.
Posted by Kaptain Kobold at 21:18