Just before Christmas I bought Neil Thomas's 'Wargaming: An Introduction'. This afternoon I thought I would try out one of the sets of rules in it, and went for the ACW.

Rather than do my usual trick of changing things from the word go, I decided to play the game straight. I assembled two 1861 forces straight from the book, randomly determining troop quality from the start rather. The resulting forces probably gave the Union a slight edge; they start with more troops and quality rolls which favour lower quality, but the dice were good to them and they got a reasonably competent force. In contrast the Confederates didn't do so well.

In order to give the game some focus I randomly determined terrain, but put a fordable river across the middle, with a single road-crossing. Assuming neither army broke the victor would be whichever side held the majority of the two hills and the river crossing at the end of 20 turns.

I diced for each unit to see if it would start in the centre, left or right sector of their board edge. This would, to some extent, create a plan for both sides. This was the initial setup. 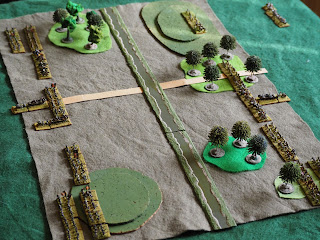 The view from behind the Confederate left. The Confederates had their best infantry massed on this flank, aimed at the Union-controlled hill across the river. However they would have to work their way through the woods to get there. 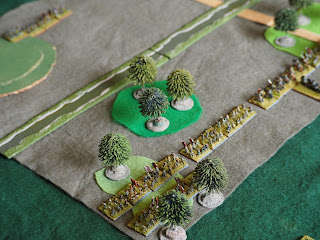 The Union left was well supplied with infantry as well, and supported by their sole cavalry unit. 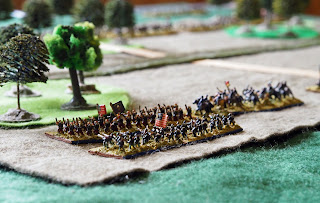 The majority of the Union infantry was on their right, facing the main Confederate assault. 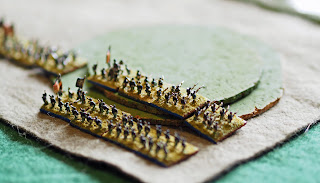 Both sides had a light force in the more open centre. The Confederates had their artillery there, as well as some infantry and cavalry. 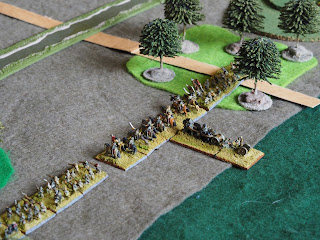 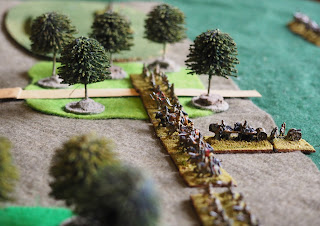 The Union artillery was also in the centre, as well as a single infantry unit. 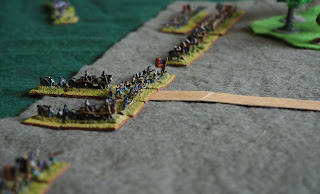 With both sides having to advance through woods on their left, the battle opened in the centre with the Union artillery opening fire. 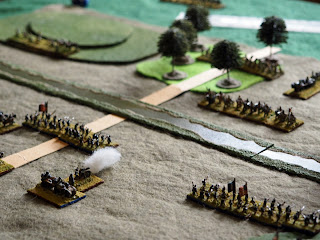 The Confederates advanced their cavalry to cover the river crossing, but I failed to take into account the width of my river pieces in relation to the firing range cavalry has in this game; the Union troops would pretty much have to line the opposite bank for the Confederate cavalry to be able to fire at them, and there was no way the artillery would oblige like that. Eventually the cavalry withdrew. 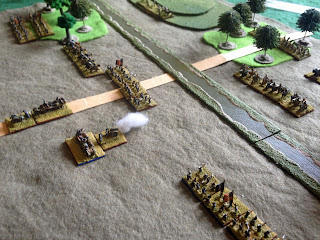 A view of the game a few turns in. The Union had advanced most of their troops to the river, and were opening fire on the advancing Confederates. Whilst the woods slowed the Confederate advance they also provided much needed cover. 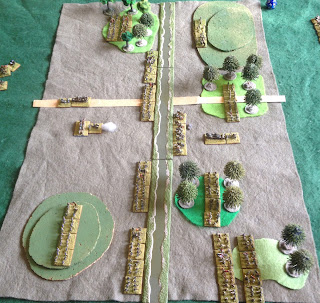 A major firefight broke out on the Union right, and the Confederates tried to use their higher quality to push forward against the shakier Union troops opposing them. 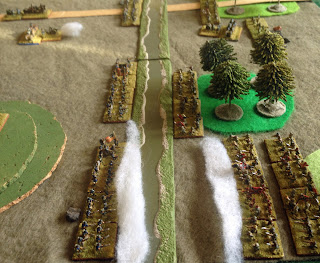 The Union fell back from the riverbank. 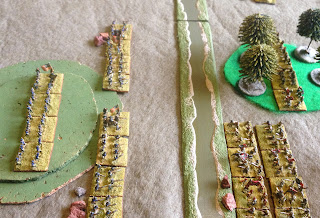 In the centre the Union artillery was proving useful, but the ford was well-defended by Confederates in the woods. The Union would have to rely on winning on one of the flanks to make a useful assault here. 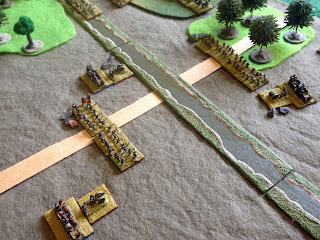 The Confederate right was held entirely by a unit of cavalry. This really didn't stand a chance one the Union infantry pushed across the river. 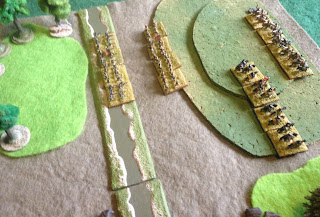 At this point I had to abandon the game. It was my turn to cook tea, and time had caught up with me. In addition I was finding it a struggle to work out how to play the game. The problem with the rules in Neil Thomas's book is that most of the useful stuff - for example, the precise mechanisms as to how turning works, or when a unit is considered in cover, of how far into woods you can fire - is still in Neil Thomas's head. This is great for him, and anyone he games with, but less useful to anyone else trying to work out his games. I have no doubt that, in time, I will solve all of the problems I had interpreting what should happen in particular situations, but my brain wasn't up to it this afternoon; I wanted a game where I didn't have to think about things too much, and in that respect these rules didn't deliver. This is a shame because I think, at their core, they are quite viable, and possibly have some interesting concepts which are not immediately obvious.

Saying that, if anyone has played the ACW rules, can anyone give me an idea as to why you would ever choose to charge into combat? Essentially by doing so you give the defender a free shot at you, and they get to roll in the melee as well. Your potential for inflicting casualties is no greater than if you just fired (unless you charge dismounted cavalry or artillery only), but your risk of taking casualties is greater. What's the point of doing it?

Some technical details for the curious. I showed unit quality by the position of the command stand - raw units had it on the end of the unit, regulars in the middle and elite had two command stands. For dismounted cavalry I used the horse-holder stand in the same way. I didn't remove stands, because I liked the look of the full units on the table, and the rules don't seem to be stand-based in any other respect - a unit is a simple block at all times. Instead I used grey stones to show hits, and red stones to mark lost stands. This seemed to work and was fairly easy to keep track of.

So, overall this was an interesting but slightly disappointing experience. I need to fiddle with this game before tying it again.
Posted by Kaptain Kobold at 21:29