Following on from last year we decided to have a games evening to see in the New Year again. We invited our friends Jon and Claudia over, whilst our daughter invited a whole gang of her cronies. She had access to the separate back half of the house, and we will dismiss them entirely, as I suspect the games quickly went out of the window in favour of pizzas and booze.

We did lots of chatting, so were slow actually getting on with any games. However we started with Trias, which was new to Jon and Claudia. Here we can see Claudia wondering what the hell she's actually supposed to be trying to achieve in the early part of the game, when only one continent has detached from Pangaea. 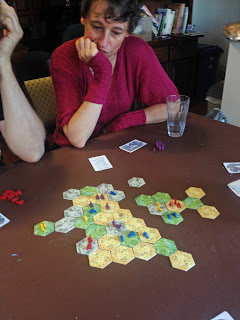 Here's a closer view of the board. The new continent was populated by everyone but purple. 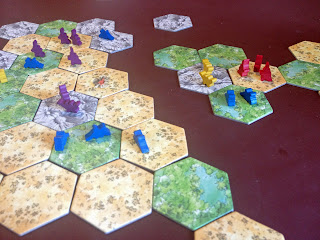 Here's the board later in the game after Pangaea has totally broken up. 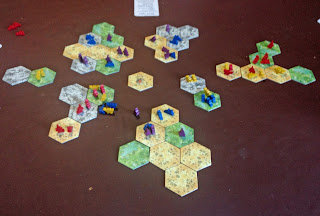 Jon, playing red, ended up with an awful lot of his limited stock of pieces on one continent. This meant he easily dominated it, but at the expense of having little presence elsewhere. 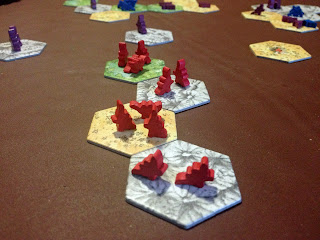 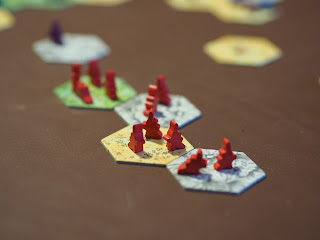 I did the same with this smaller continent. 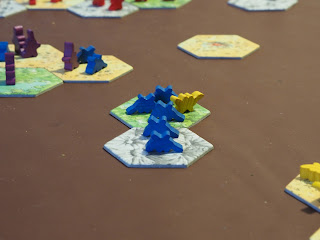 I think Catherine won in the end, spreading herself thinly across most of the continents, dominating a couple and coming second on the others. This gave her a good score. Claudia and I came second and third;  think Claudia took second place by a couple of points. Jon never really got into the game.

We then switched to Carcassonne, playing a couple of games before the clocks struck midnight and we got too tired to continue. This was the very start of the first game. 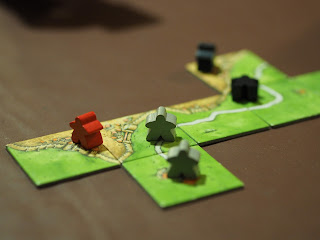 And this was later on in the same game. It was actually a low-scoring game, with few cities being completed until the end, and then no really big ones. Jon put most of his effort into farms, a seemingly pointless exercise give the low city density. Indeed some of his farms ended the game supporting nothing and, towards the end, I use some cunning (and lucky) piece placement to take away his dominance in the areas he could farm. The game ended with only four points separating first, second and third, with Catherine bringing up the rear a long way back. I won. 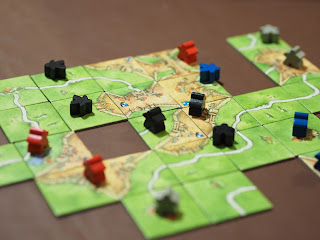 In the second game Claudia dominated from the start, grabbing Robber Baron and King early on (one of the few expansions we play) and holding them for the entire game. I managed heaps of points for farming but Claudia more than made up for them with her steady score throughout the game, plus her bonus at the end for Baron and King.