After my slightly disappointing game using Neil Thomas's ACW rules from 'Wargaming: And Introduction' on Saturday, I decided to have another go, but this time with some rules tweaks in place to deal with the issues I had in the first game.

The main change I made was to define movement more precisely and, in doing so, change it slightly from how I think he envisages it happening.

Artillery can just move in any direction; it doesn't have to worry about wheels or turns.

Infantry and cavalry can pivot up to 45 degrees either at the start or the end of their move. A unit can move in any direction, but unless this movement is within 45 degrees of its current front facing it is done at half speed.

(This movement is adapted from that in Fire and Fury; it seemed appropriate)

Finally an infantry or cavalry unit that doesn't make any other move can redeploy, by pivoting one of is stands and then reforming the other stands in a line on one or both sides of it. This allows some quite extreme movement and facing changes. However it is assumed to be difficult to do, so a unit must make a roll as it it were rallying in order to do it, otherwise it doesn't move at all this turn.

Retreat moves are at full speed, regardless of terrain.

Units can freely interpenetrate friendly units. If moving normally their movement must be able to clear the unit they are passing through. If retreating then they are required to exceed their movement distance until the unit is cleared.

(I added this last bit in to allow armies to deploy in two or more lines and pass through reserves or pull back damaged units.)

My units are four stands, each on a 20mm square base, so are half the frontage that the rules recommend, whilst, relatively speaking, being double the depth. I used a playing area 24" x 12". In Saturday's game I just halved all distances. For this game I reduced the distance to a quarter but then converted to inches. Although the difference is small, it seemed to make movement and rages easier to handle. Infantry moves 2" and has a firing range of 4".

The only other change I added was to allow cavalry to fire the full 16cm (4"). However at over half range they only hit on a 5-6. Again this was adapted from Fire & Fury.

I used the same 1861 forces I had on Saturday, but rolled for quality again. The Union force was mostly militia, with one average infantry unit. The Confederates had a mix of militia and average infantry, but had an average and an elite cavalry unit. Once again I randomly determined starting positions.

In order to make the game work more smoothly I dropped the river, and added a crossroads. This, and the hill each side had on their half of the boards, were the objectives. I set a time limit of 15 turns, at the end of which the winner would be the side who controlled the majority of the objectives. 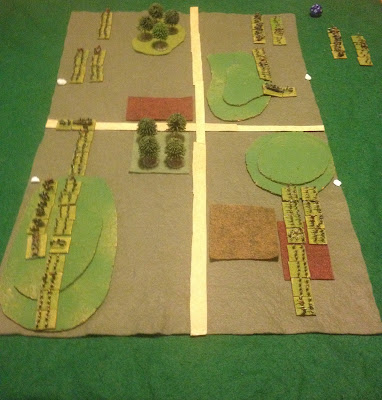 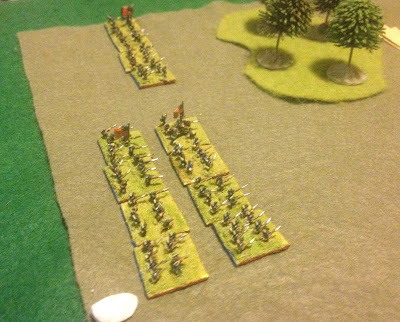 Against them the Confederates had some average infantry, plus their two cavalry units and some supporting artillery (smoothbores). 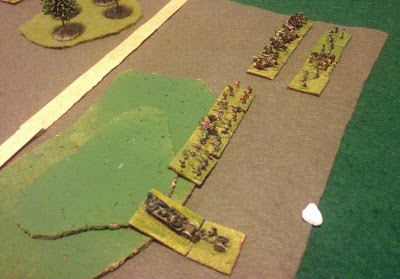 The Confederate left was also made up of three infantry units, one average, and the others militia. 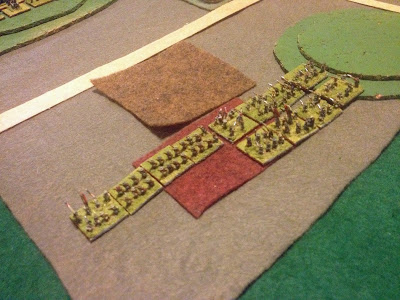 Their unenviable task was to take a hill defended by militia and average infantry, plus artillery and supporting cavalry. 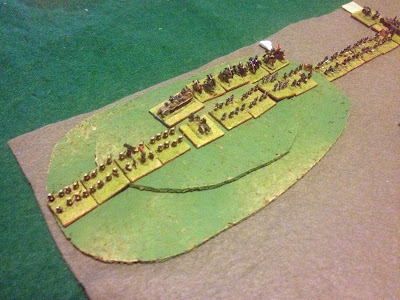 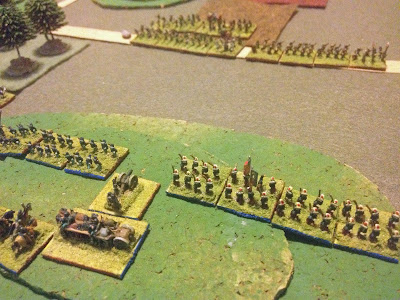 On the other flank the Union marched towards the Confederate-held hill. 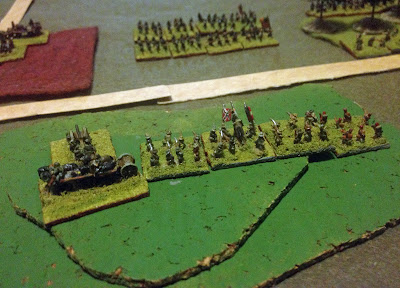 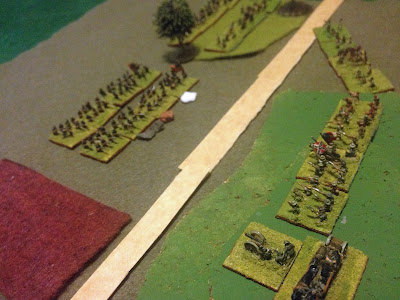 The Confederates left were advancing doggedly against the hill they were tasked with capturing but were flanked by more Union infantry from the centre; the Union lose out on quality, but have an edge in numbers. 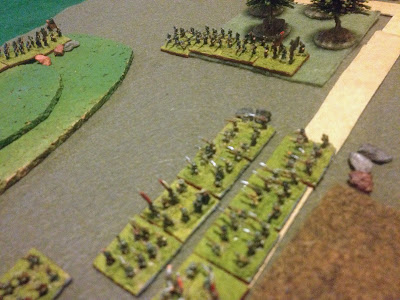 The battle for the woods on the Confederate right. 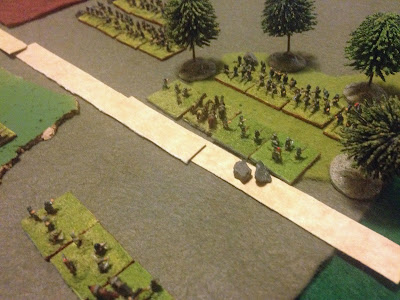 The Union attack on the Confederate right was making slow progress, but in the background you can see the Union cavalry moving up in support; their presence on the Union-held hill was obviously not going to be needed. 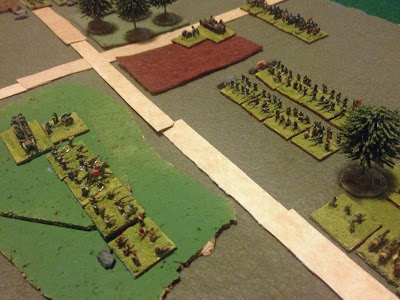 The Confederate left was rolling well, and passing morale tests against all odds, but the Union had too many guns they could bring to bear, and their attack began to falter. 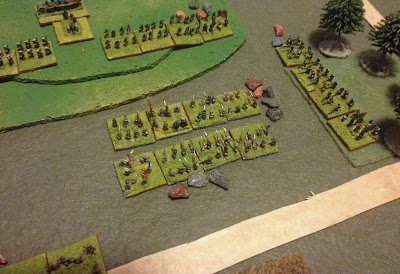 Meanwhile the Union now held the crossroads in the centre, and were putting pressure on the defenders of the hill. 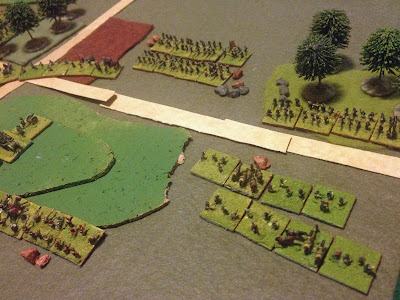 The Confederate left made one final assault, before Union firepower drove off all three units. 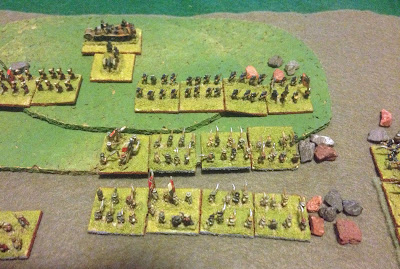 One last hurrah for the Confederates as some of their cavalry catches a Union artillery battery in an exposed position and overruns it. 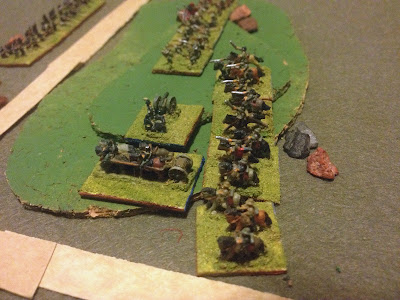 The position at the end of the battle; the Confederates still held their hill, but the Union held the crossroads and their hill, so won by two objectives to one. 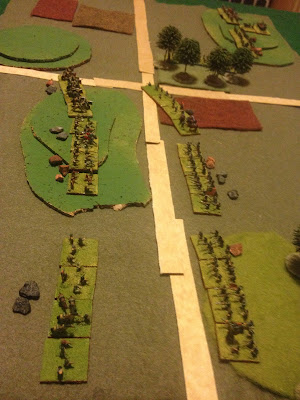 The Union troops on their right had been battered, but a few turns of rallying would see them back and fighting fit. 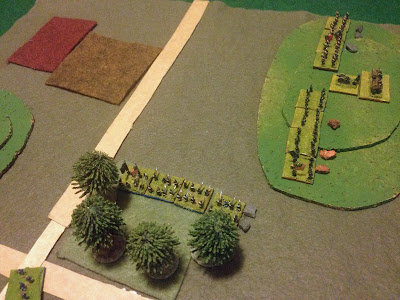 This game was a lot more fun than the previous one, and it was interesting seeing how some of the rules worked once I wasn't trying to figure out the basics. Rallying is very powerful, but well-positioned units can prevent the enemy from doing it. And if you don't pull back and rally from time to time units will quickly disintegrate under the deadly firing these rules have. As battle after battle in the actual war demonstrated, you need good odds to pull off a frontal attack, and this set of rules requires the same.

And I even got a close combat, albeit one where the attacker didn't have to roll to go in (it was a flank attack) and where the target was instantly destroyed.
Posted by Kaptain Kobold at 23:20