We had a big storm with lots of rain last night, so with the prospect of only two of us available for gaming Caesar and I decided that hauling over to the University in the bad weather was a bit of an effort, and I went to his place instead.

We played Memoir '44, picking a scenario fro the basic rulebook that neither of us had played before, the German attack at Arracourt on September 19th 1944. This looked like a tough one for the Germans, who are playing a four-card hand against the US six-card hand, and who are already stuck into an all-out attack from the start. The US have plenty of terrain on which to base their defences, and are well-supported by artillery. 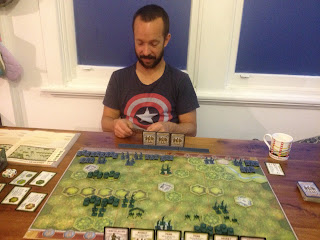 The US left is where the main action takes place. On the other flank the Germans are stuck behind terrain, and have difficulties getting into the game in any useful way.

As you can see, there are lots of tanks in this scenario. 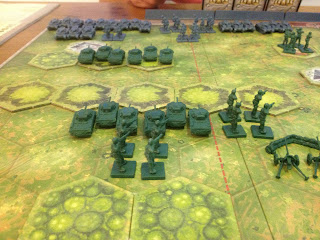 Caesar piled into the attack, but I kept up a vigorous counter-attack. The key moment for the US came when German forces which had taken the first US defensive line were hit by an air-strike before they could consolidate, with the reeling troops then being hit by an ferocious US assault in the centre. 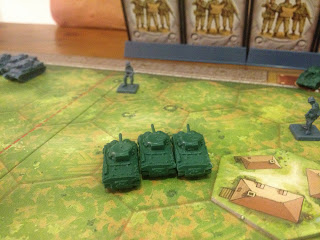 A lot of the German troops barely made it off the start-line. 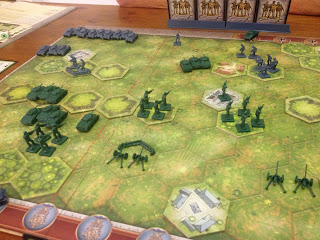 I final attack by the US tanks against a weak infantry unit gave me a 6-1 victory.

We swapped sides. I got an excellent draw on my first turn, allowing me to assault with most of my units two turns in a row, and keep up the attack for the next couple. This immediately put Caesar's US troops on the back-foot. 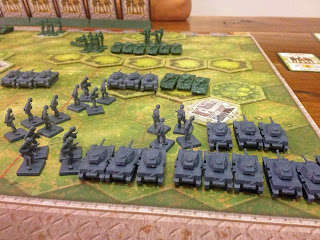 The Germans rolled over the first line of US defences, and some of their tanks even pushed through into the rear and ended up in a position to attack the US artillery support. 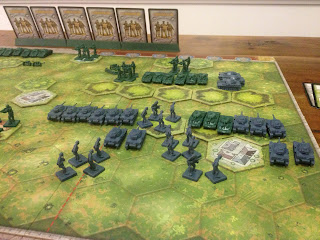 US forces on the German right were pretty much wiped out, and the Germans swung left to roll up the enemy line. The final US casualties occurred just as I ran out of useful cards. I won this one 7-2, giving me a 13-3 victory on aggregate. 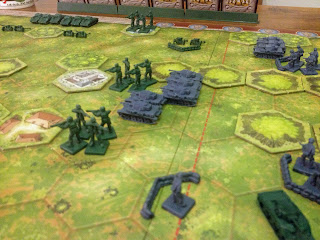 We finished off the evening with a quick scenario set in East Africa in 1940 - Gallabat/Metemma. In this British troops attack a strong Italian defensive position, with the battle being split by an impassable dry river-bed with a single bridge. The British have a tough job; their only real advantage is their tanks, but the Italian troops are well protected from them in towns. The British need to attack and force them out into the open.

I failed to do that. I took one defensive position on my left, but dug-in troops beyond it stubbornly refused to move despite attack after attack. I lost 1-4. Thanks to Caesar for being a genial host and gallant opponent, and for letting me feed his new goat.
Posted by Kaptain Kobold at 07:07