We had another crack at Caesar's Blenheim scenario for Maurice last night. This is quite a big game, so he took the decision to speed it up by downgrading all troops by one level - Trained became Conscript and Elite became Trained, with only the French household cavalry being Elite. The idea was that with more brittle troop the game would be speeded up.

John's troops held Blenheim itself. Caesar was his wing-man. 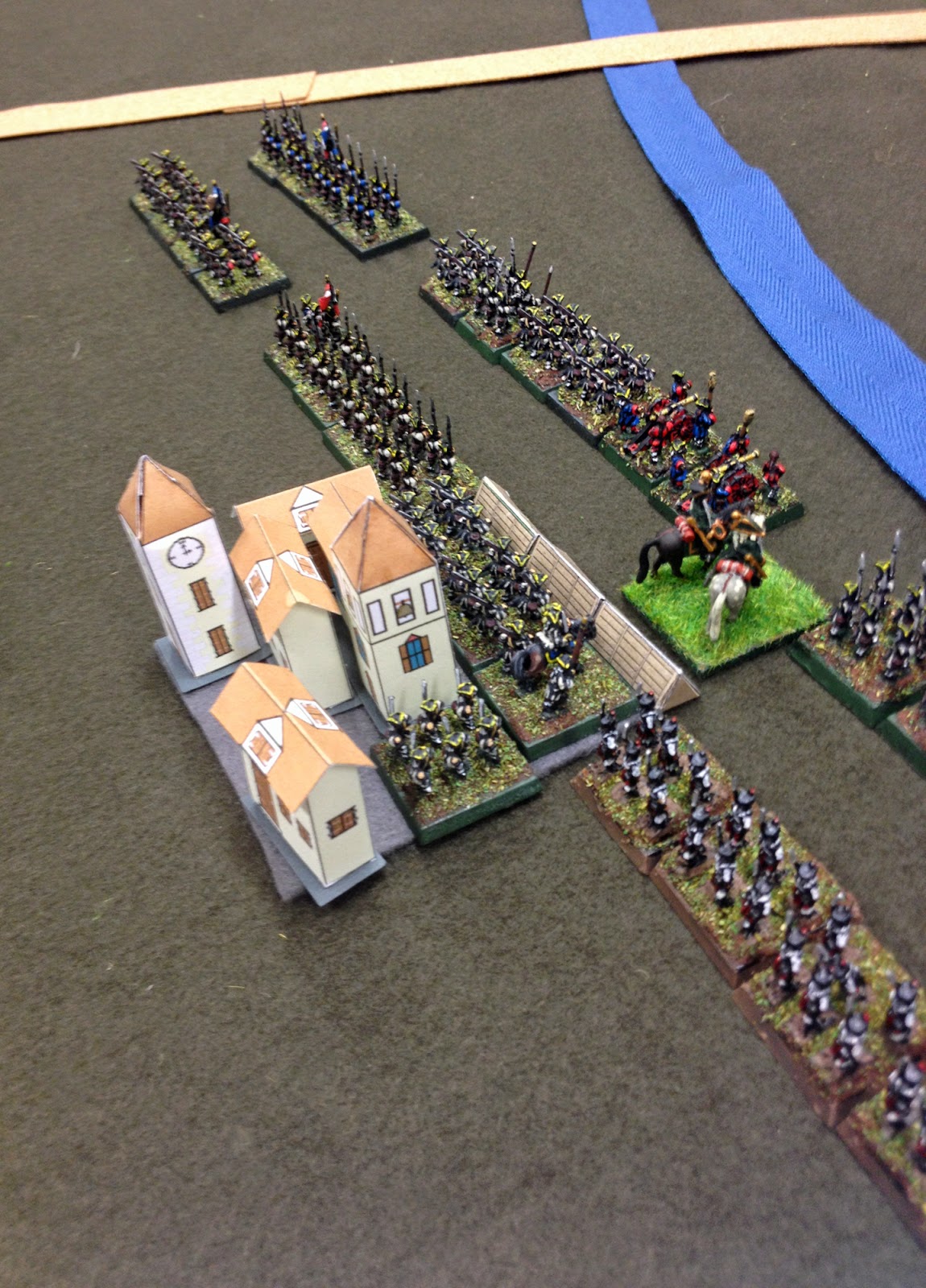 Gary and I took the Allies - Gary was Eugene whilst I was a kind of Marlborough Light. 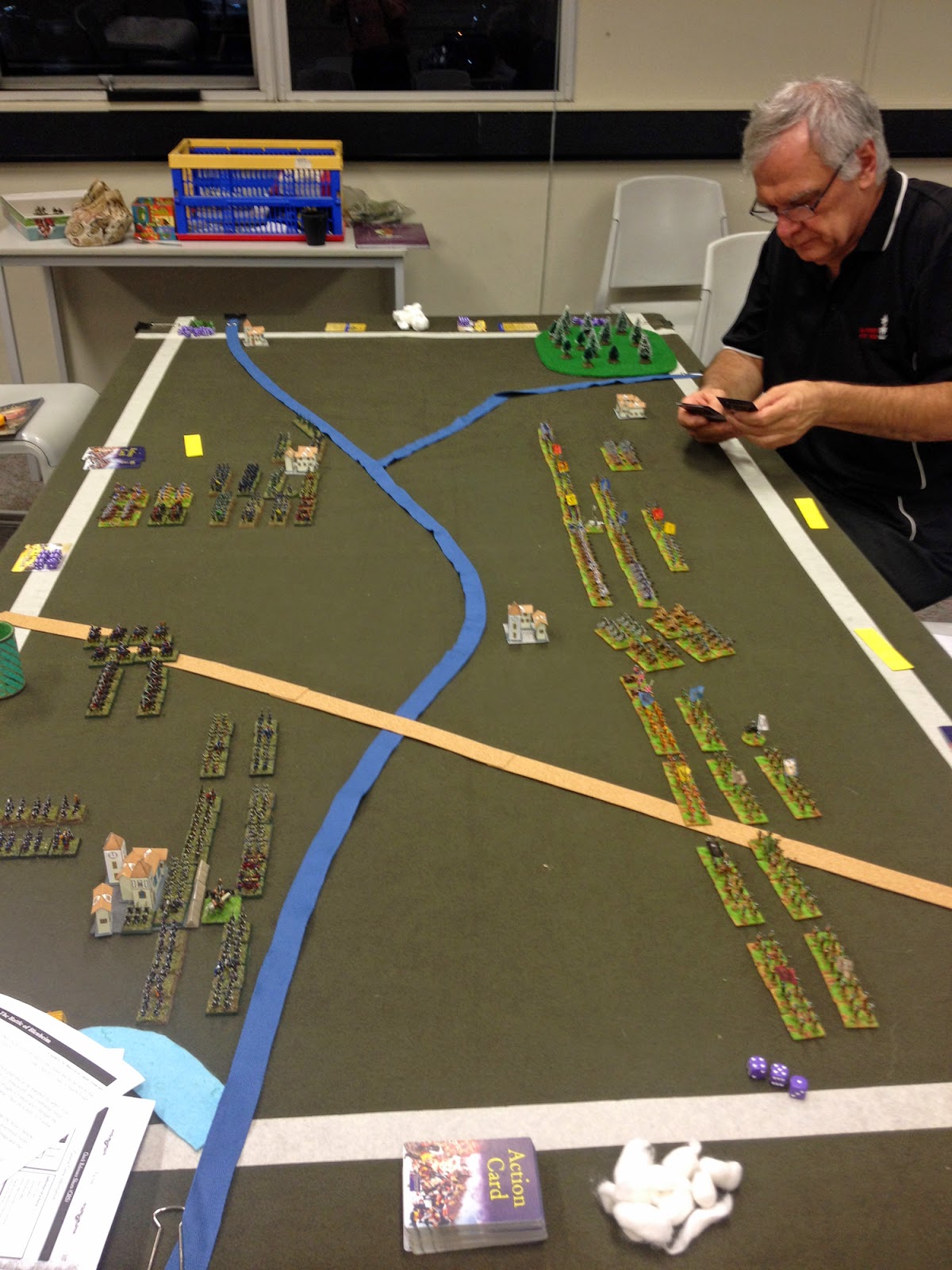 We had a plan which involved pinning their infantry on the flanks and then driving cavalry into their lightly-held centre. This is my cavalry. Gary's can be seen just to the right. In tonight's game the role of the Allied army will be played by GNW Russians and Swedes. 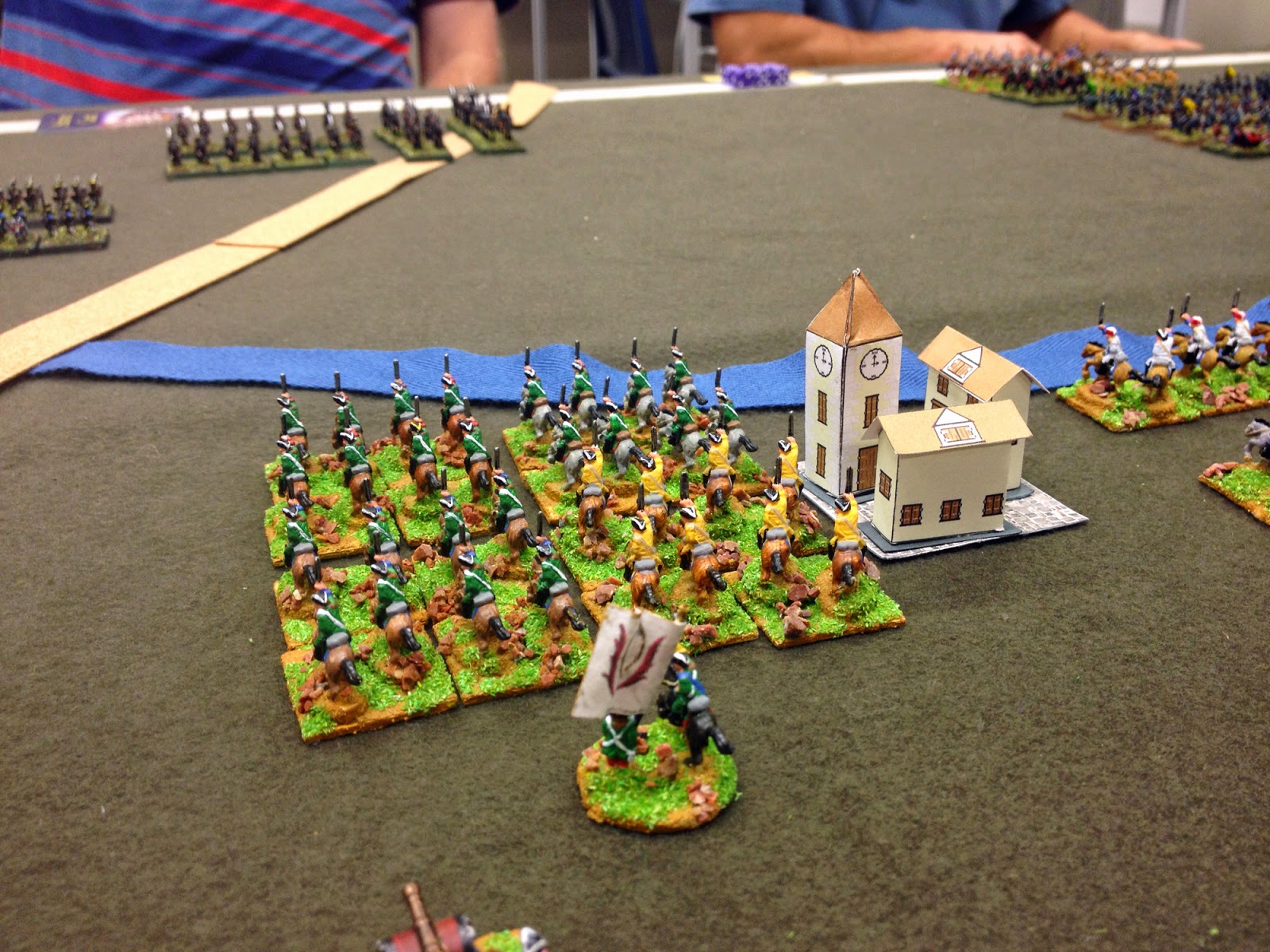 A panoramic shot of the battle, courtesy of the iPhone.

I pushed my infantry forward, hoping my superior firepower would force John to spend all of his time and resources rallying his troops, and thus preventing him from responding to our cavalry attack. 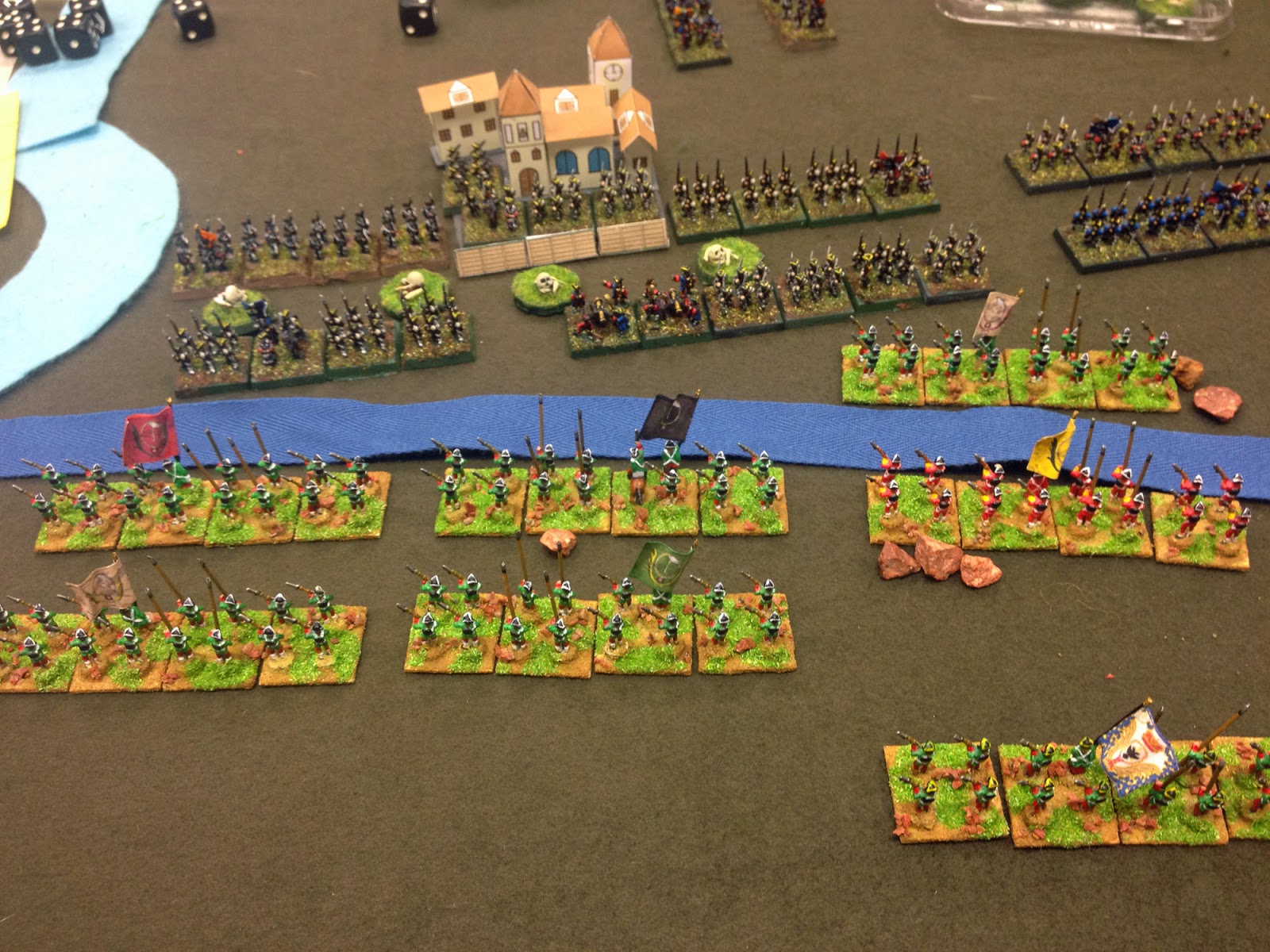 Caesar insisted that I took a picture of his artillery opening fire. Yes, I do requests. 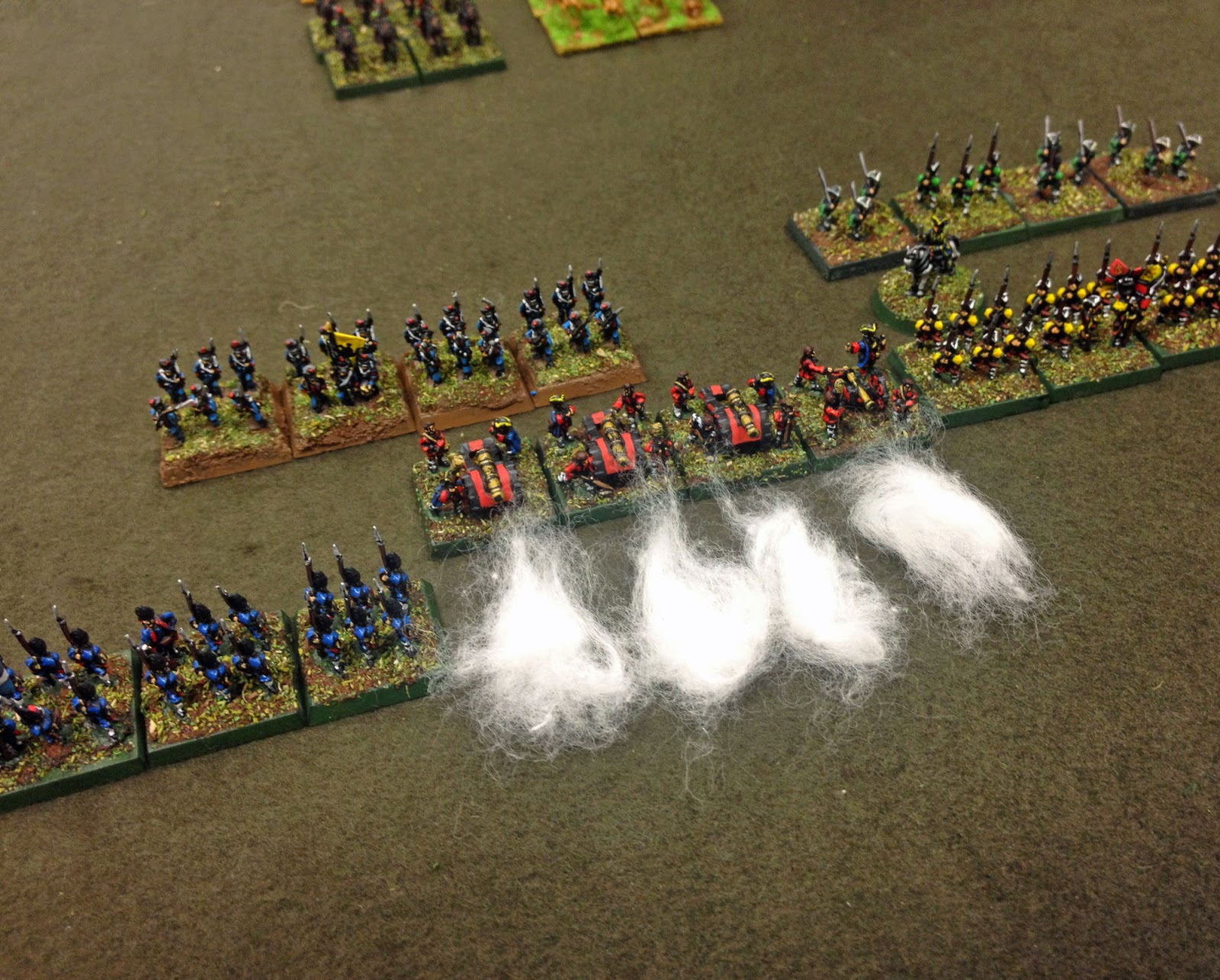 Unfortunately for me John hit me with a couple of cards which reduced the effect of my firing, and I was locked into a far more even firefight than I'd hoped, which meant that I was spending as much time rallying as he was. Our cavalry just sat, waiting for the order to advance. And meanwhile the Franco-Bavarians plugged the gap in their centre. 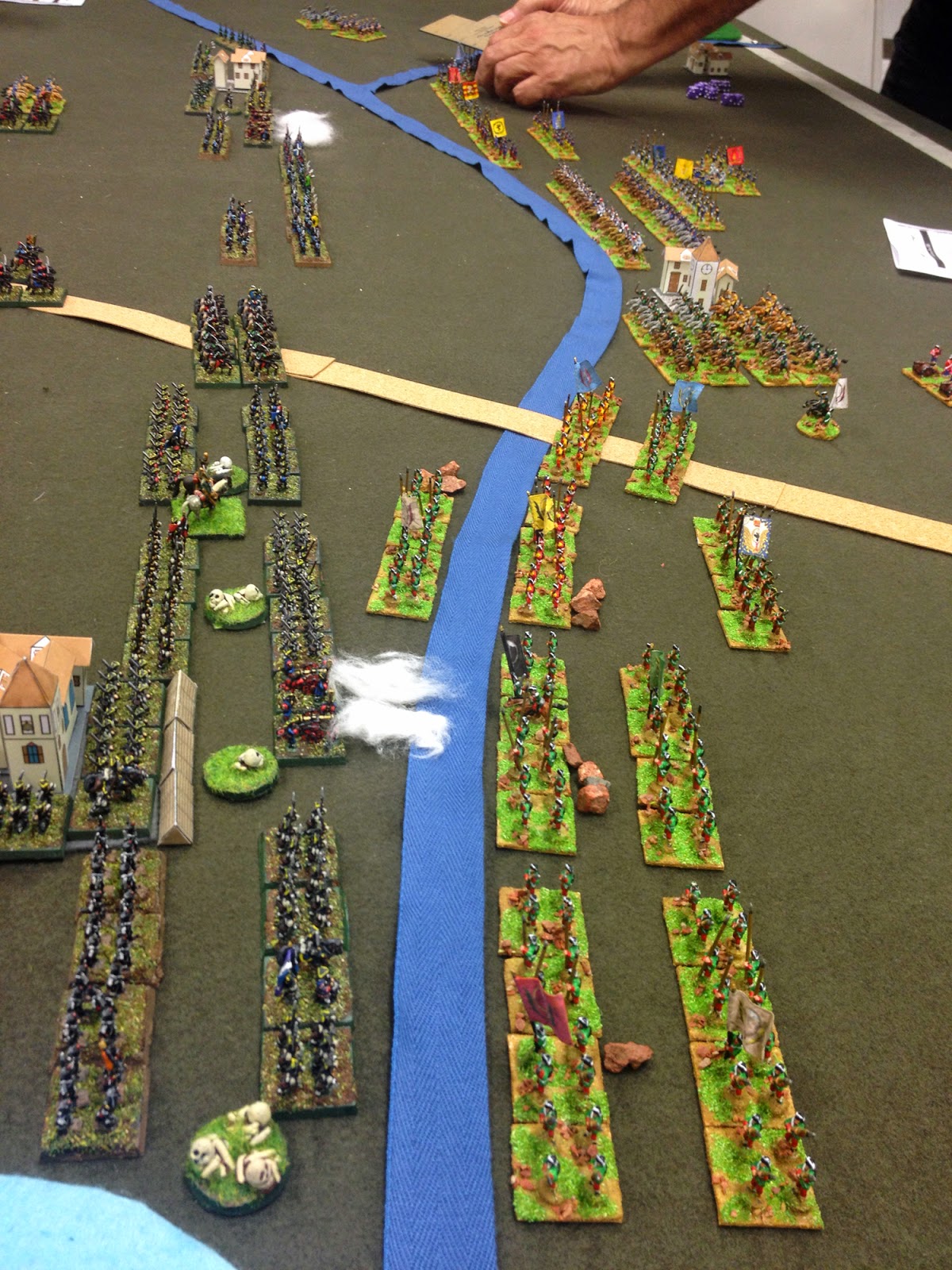 Gary found his waiting cavalry under fire and had to pull back. 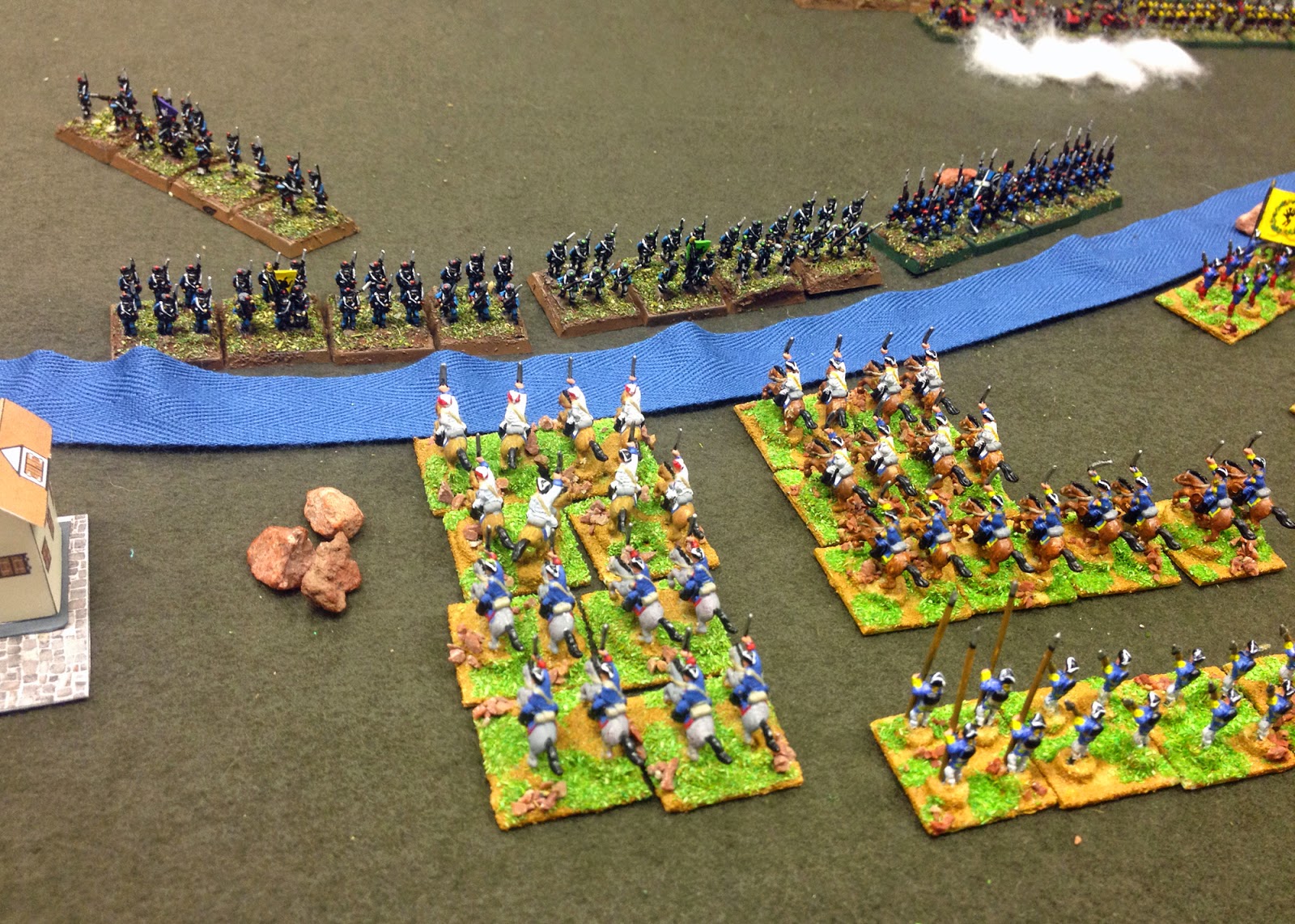 In a moment of madness the French guard cavalry decided to advance. It got shot at as well. 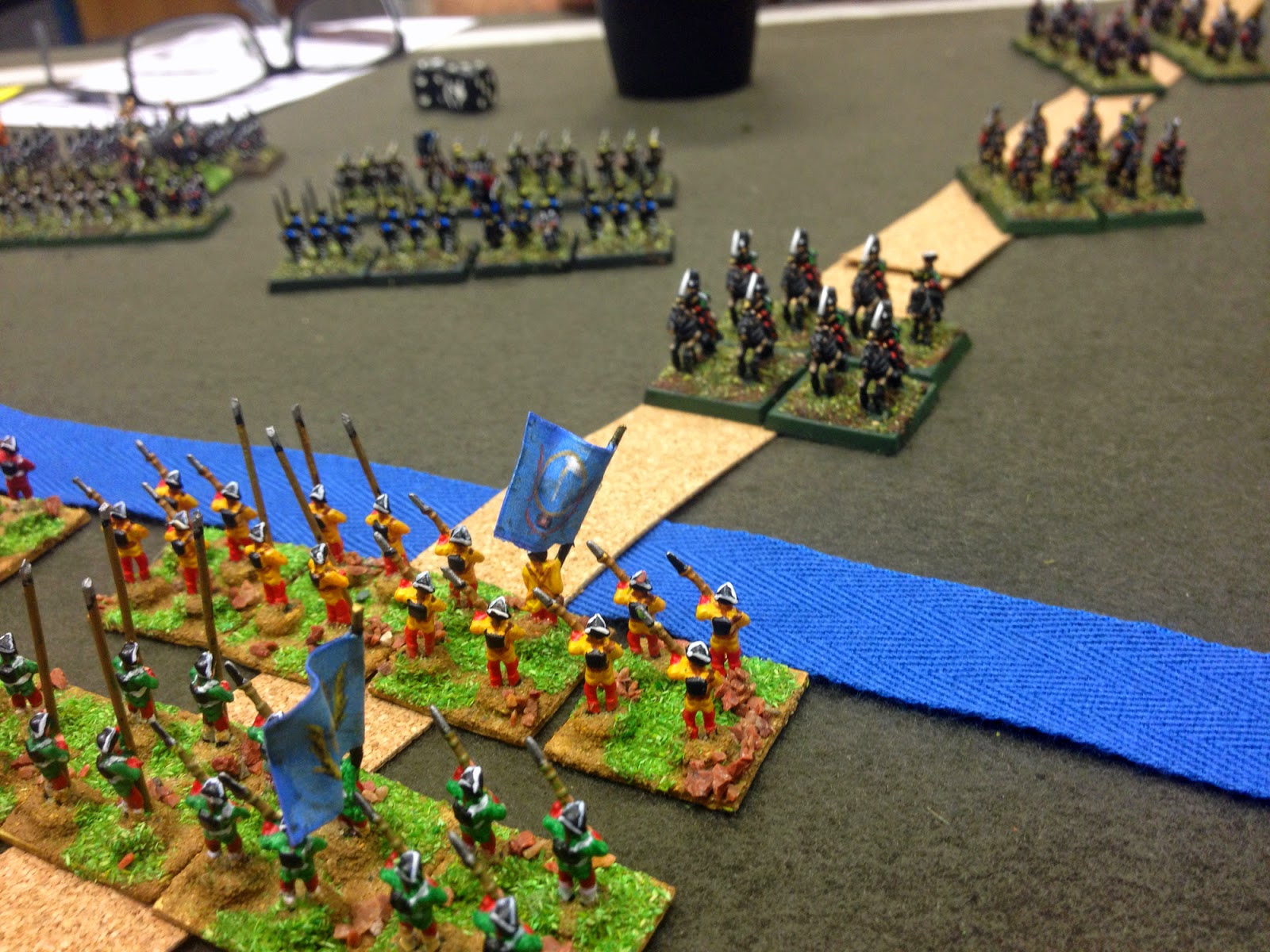 Whilst the firefight I was engaged I hadn't been as swift as I'd hoped, it was slowly going my way, and I crossed the river hoping to bring the fight to the French and maybe take the pressure off Gary. Unfortunately this put my troops in range of the Blenheim garrison, with no plans as to how I was going to take it out. 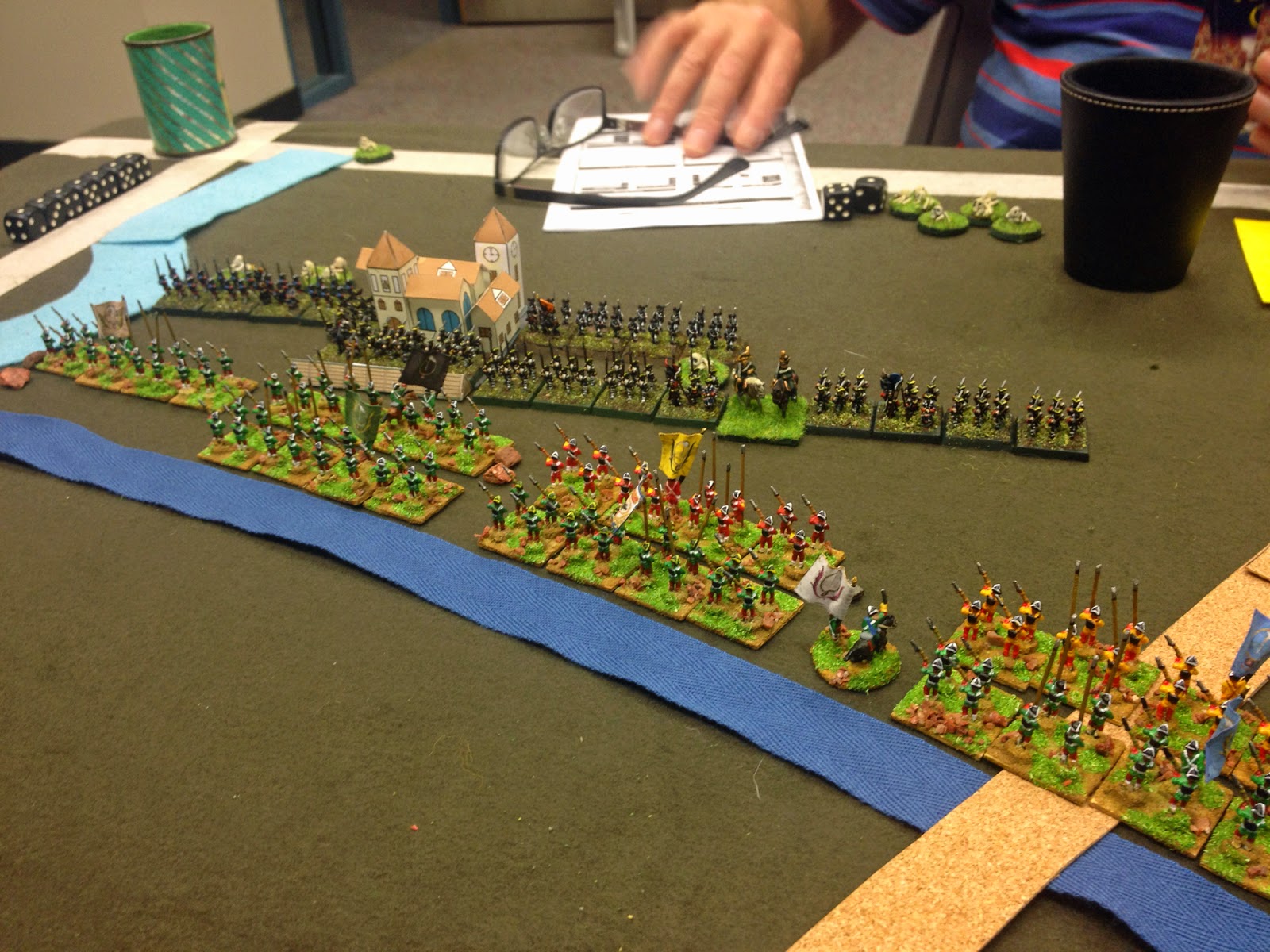 On the other flank Caesar pretty much had the initiative over Gary, who really had no useful opening available for attacking the Bavarians. 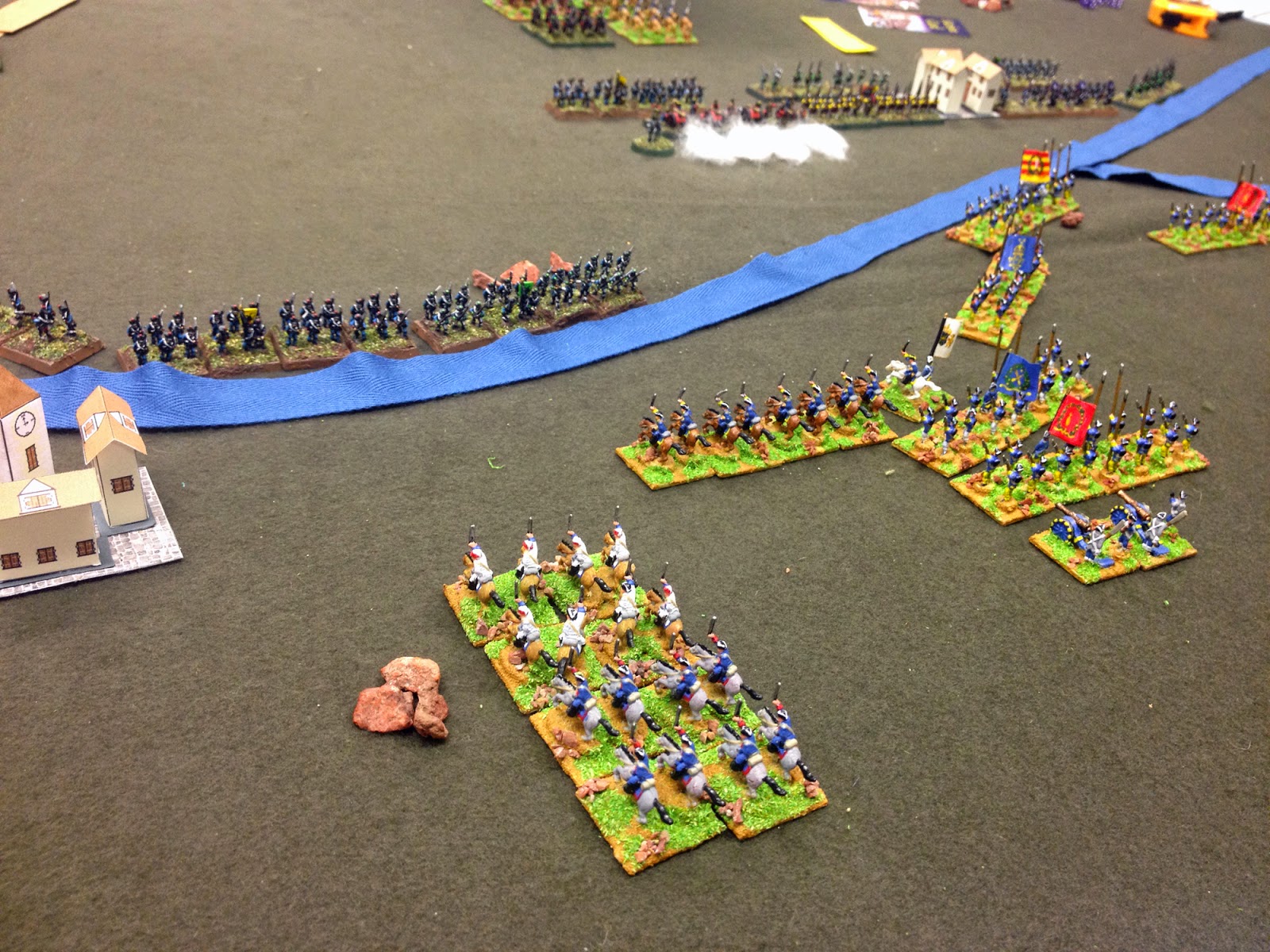 Around Blenheim casualties mounted on both sides, with the conscript rating of the troops really coming to the fore. Blenheim was holding with no trouble at all, and I was losing units. We did manage to shoot down both French guard cavalry units though, unable to rally or withdraw due to John's command efforts being needed to keep his infantry line intact. 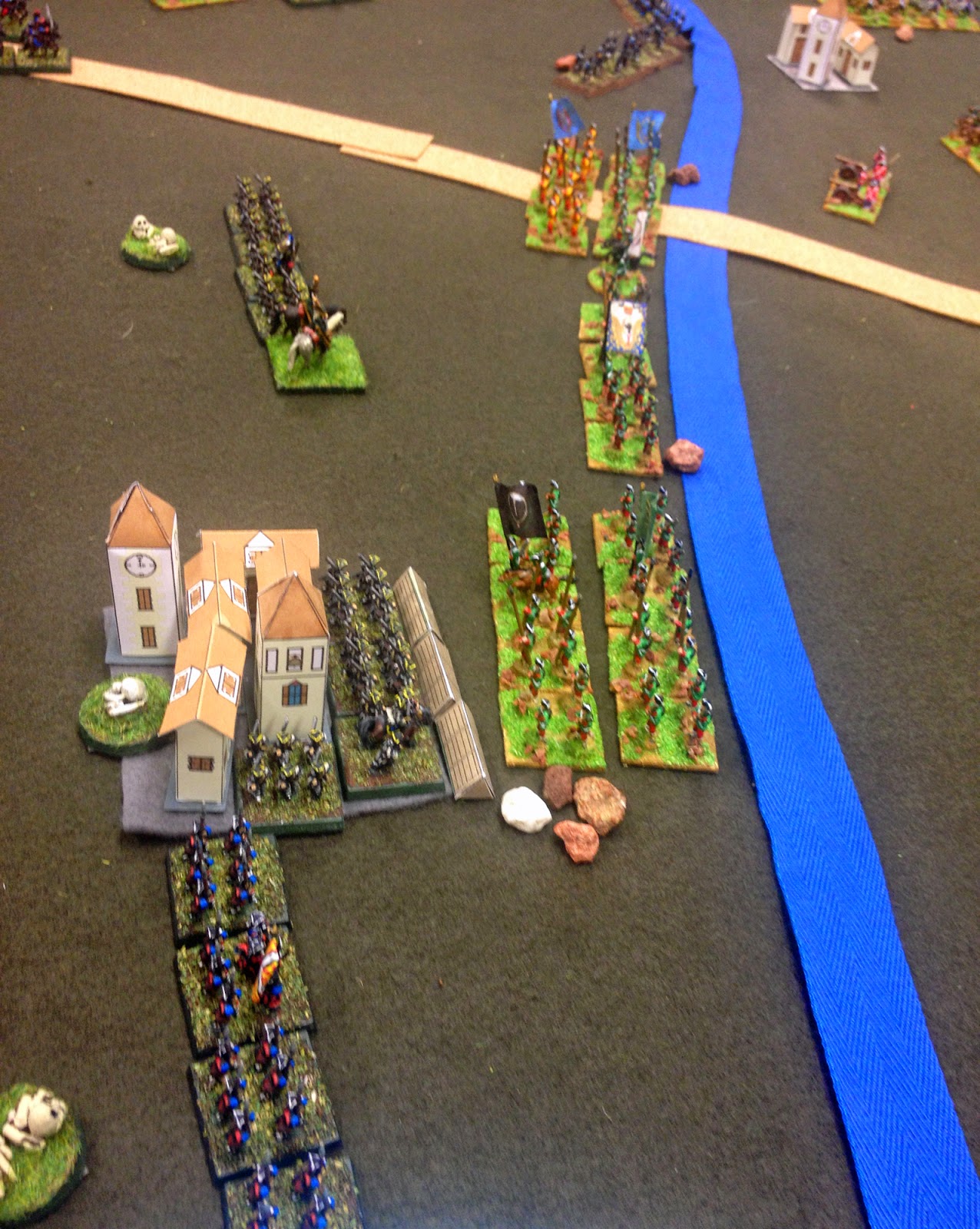 Gary and I conceded the game at this point. There was still fight left in both sides, but we really had no effective attack going anywhere, and hadn't the time to organise anything. Morale was dropping rapidly on both sides, but our opponents held the objective and, despite my view that in Maurice the real objective is smashing the enemy army, that would give them a win. 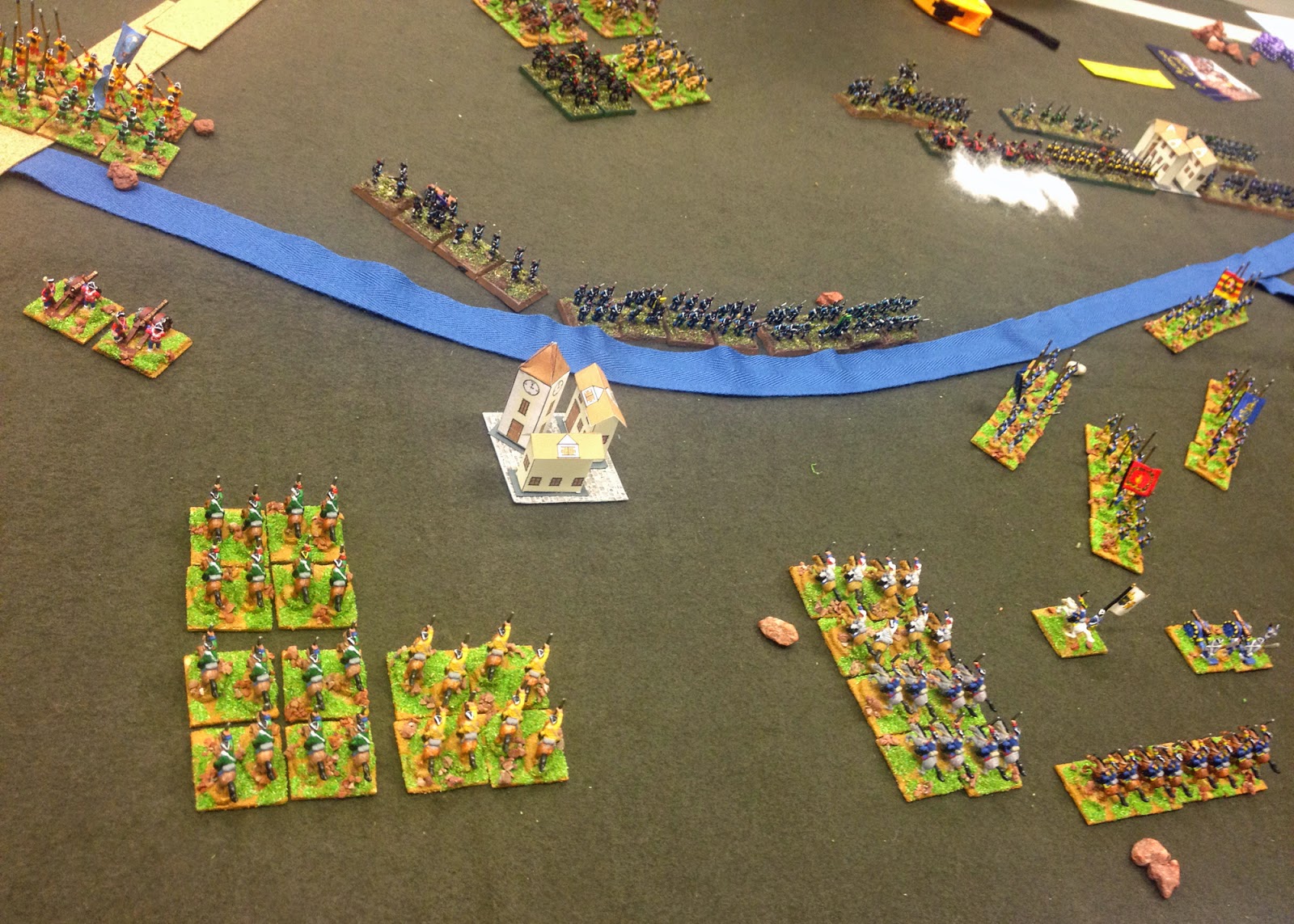 Thanks to Caesar organising another great game, even if the wrong side won. we had a good plan - a great plan - but failed to implement it, through a combination of bad luck and maybe a lack of daring.