The Original Battle For Mount Fuji

Yesterday I posted another of my One-Hour Wargames scenario reports, featuring a giant monster battle for the control of a cardboard-box Mount Fuji. What I didn't mention was that it was the second attempt I'd made at playing the game. I started one earlier that day, but abandoned it because it was just too fiddly and unwieldy to run and wasn't giving a fun game. But it did make for some nice pictures, so I thought I'd show some of them off.

The game differed from the one I played in that it included both Human army units and some Alien forces as well. I was interested to see how a game where both sides are a mix of swarms and giant monster would play out.

The JSDF had Valiant Monster Fighter, but the rest of their forces were all conventional - four swarms, consisting of nine Infantry, four Tanks, four Helicopters and three Jet Planes.

The Aliens had two giant monsters - Gigan and Ghidorah, but also had nine Infantry and four Tanks. Their stats were the same as the ones the Humans had; I didn't see any reason to complicate things by having special Alien Tank and Infantry stats. Not yet anyway.

In this picture you can see the Aliens set up. I used my hair-roller WW1 troops for the Aliens, although I can't see any futuristic army basing their tanks on WW1 British MkIVs. Can you? The JSDF tanks and infantry made up the frontal attack force. Valiant Monster Fighter and the air units were the sneaky flank attack. 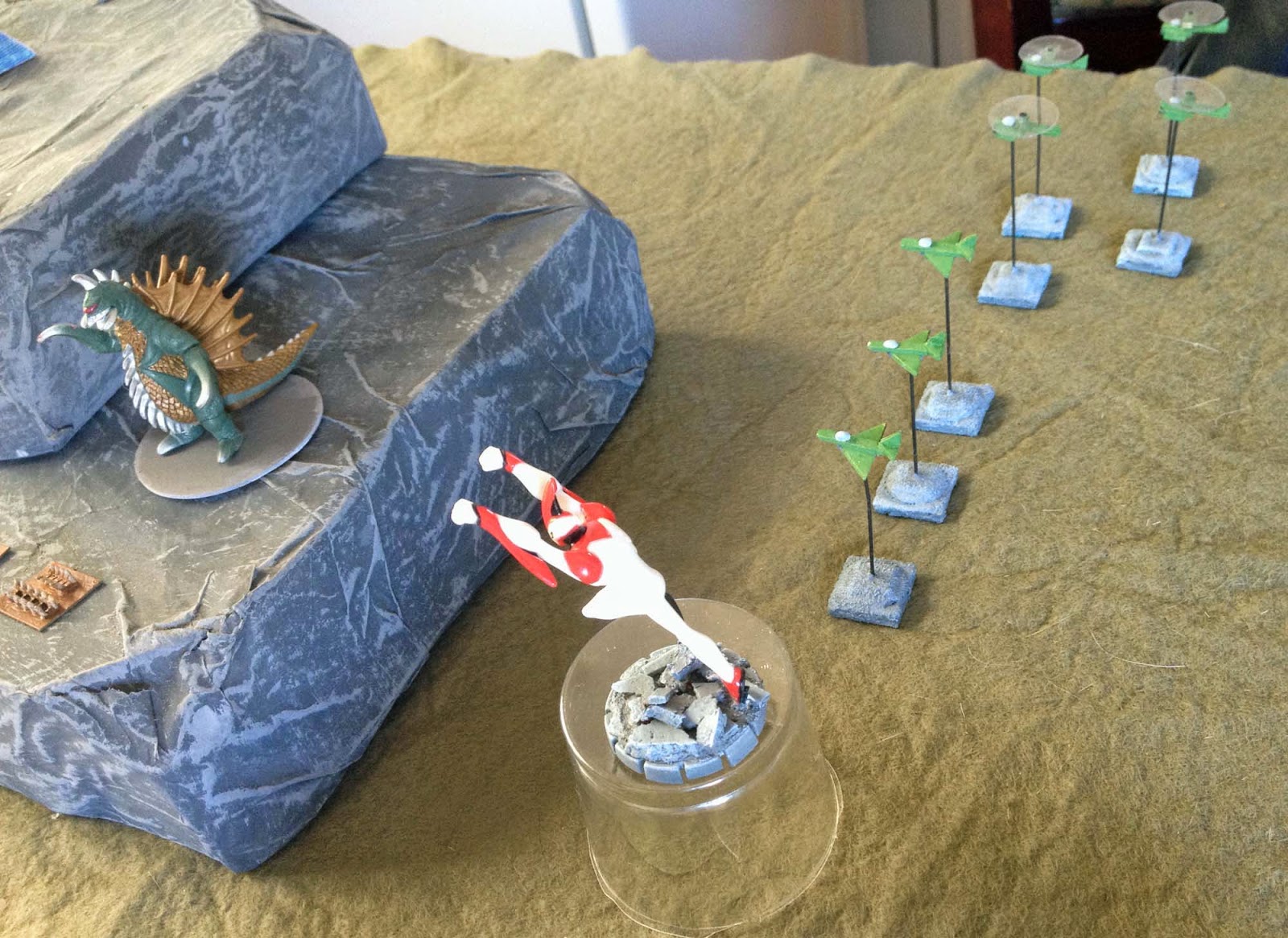 Gigan was the monster bearing the brunt of the initial attack, although in fact only Valiant Monster Fighter went after him; the helicopters and planes went after the alien ground troops on the mountain. 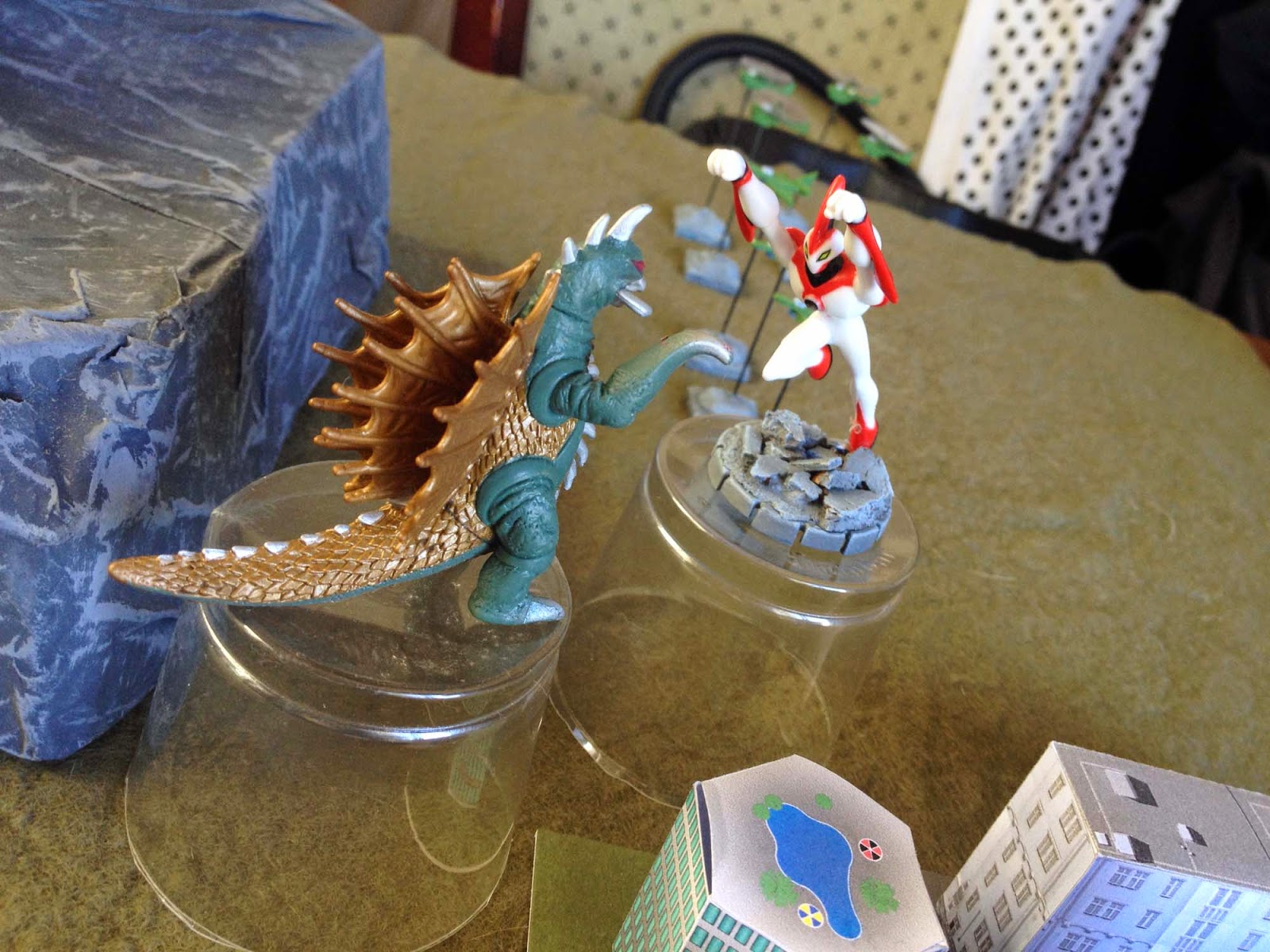 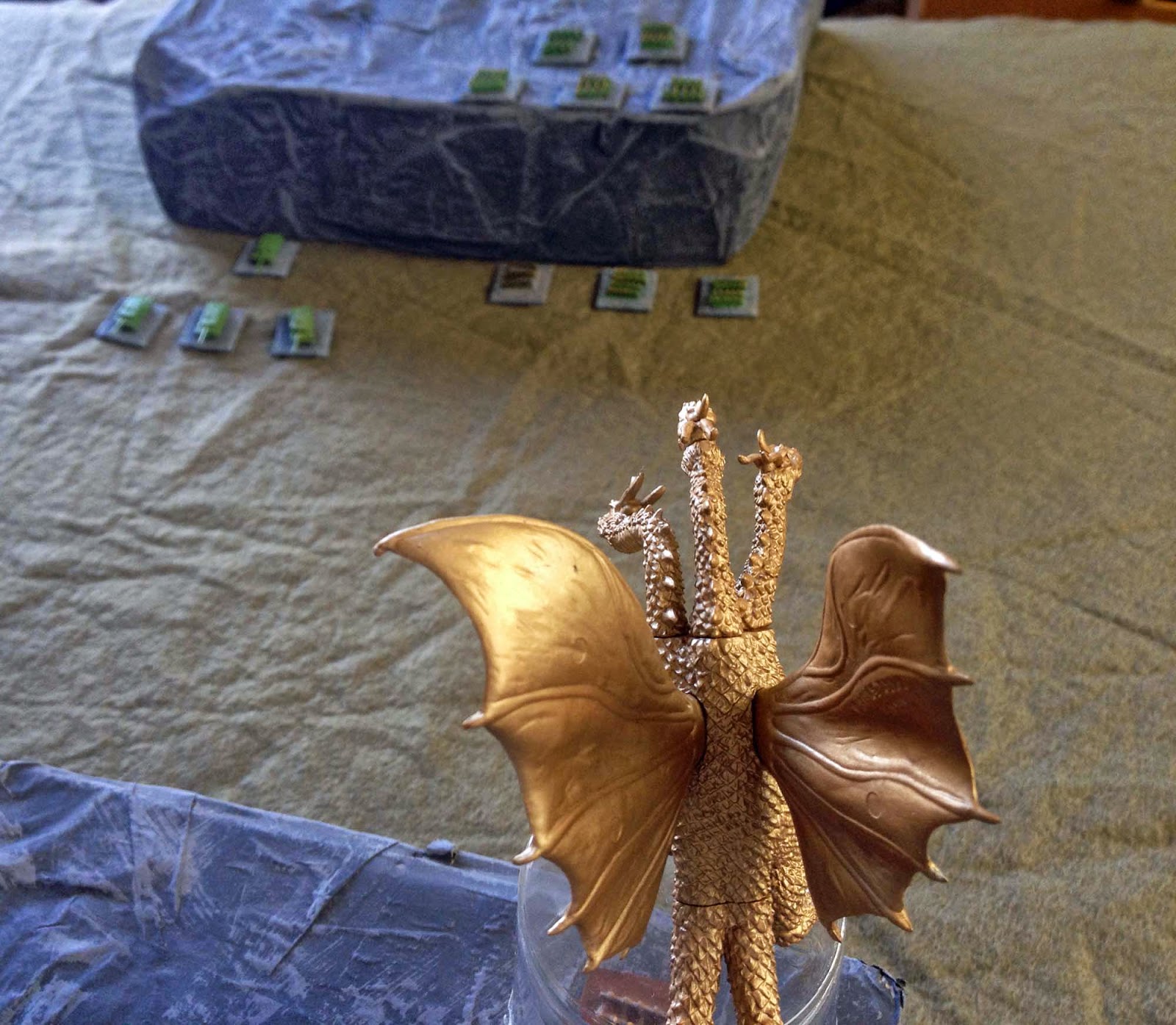 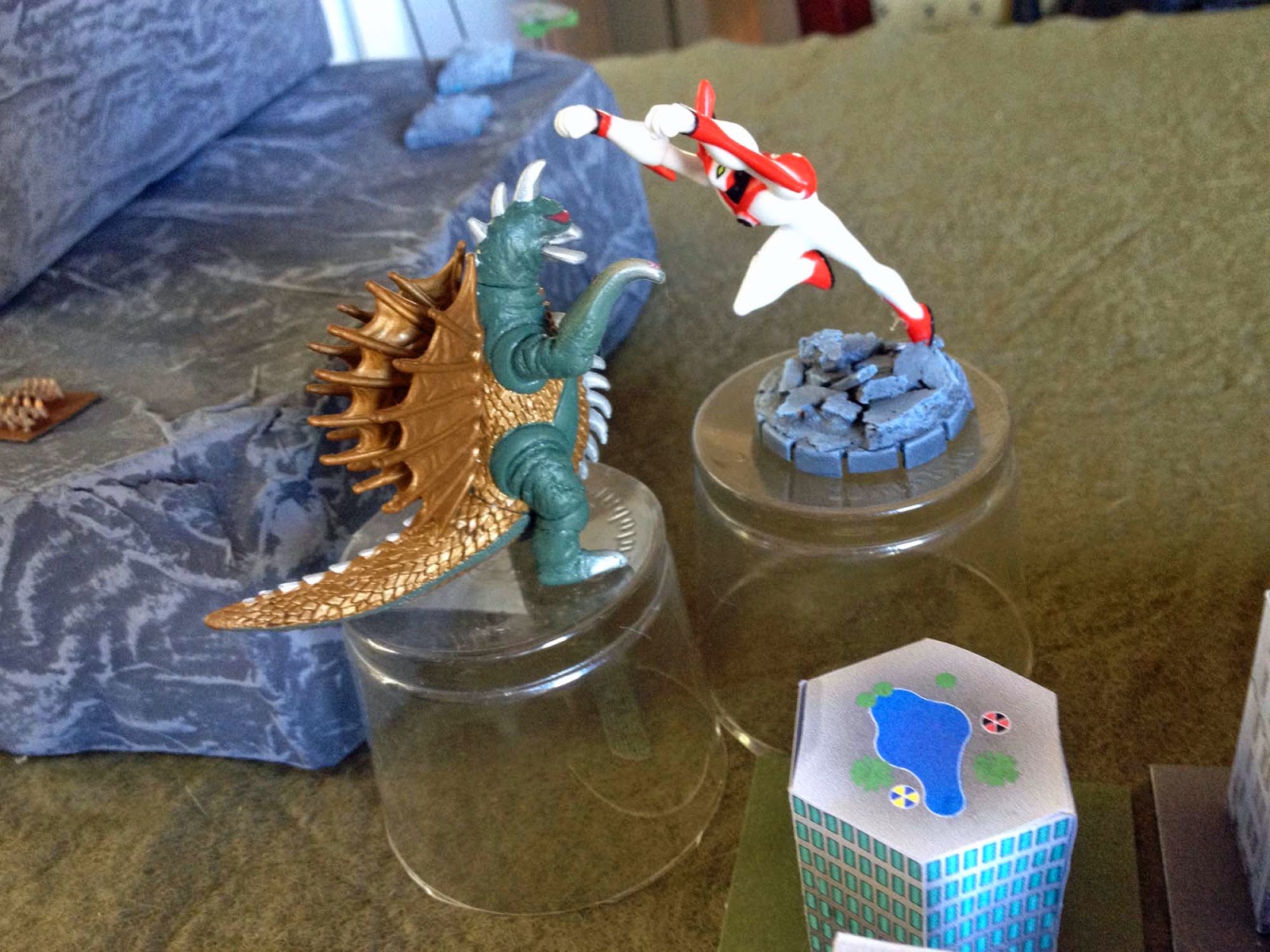 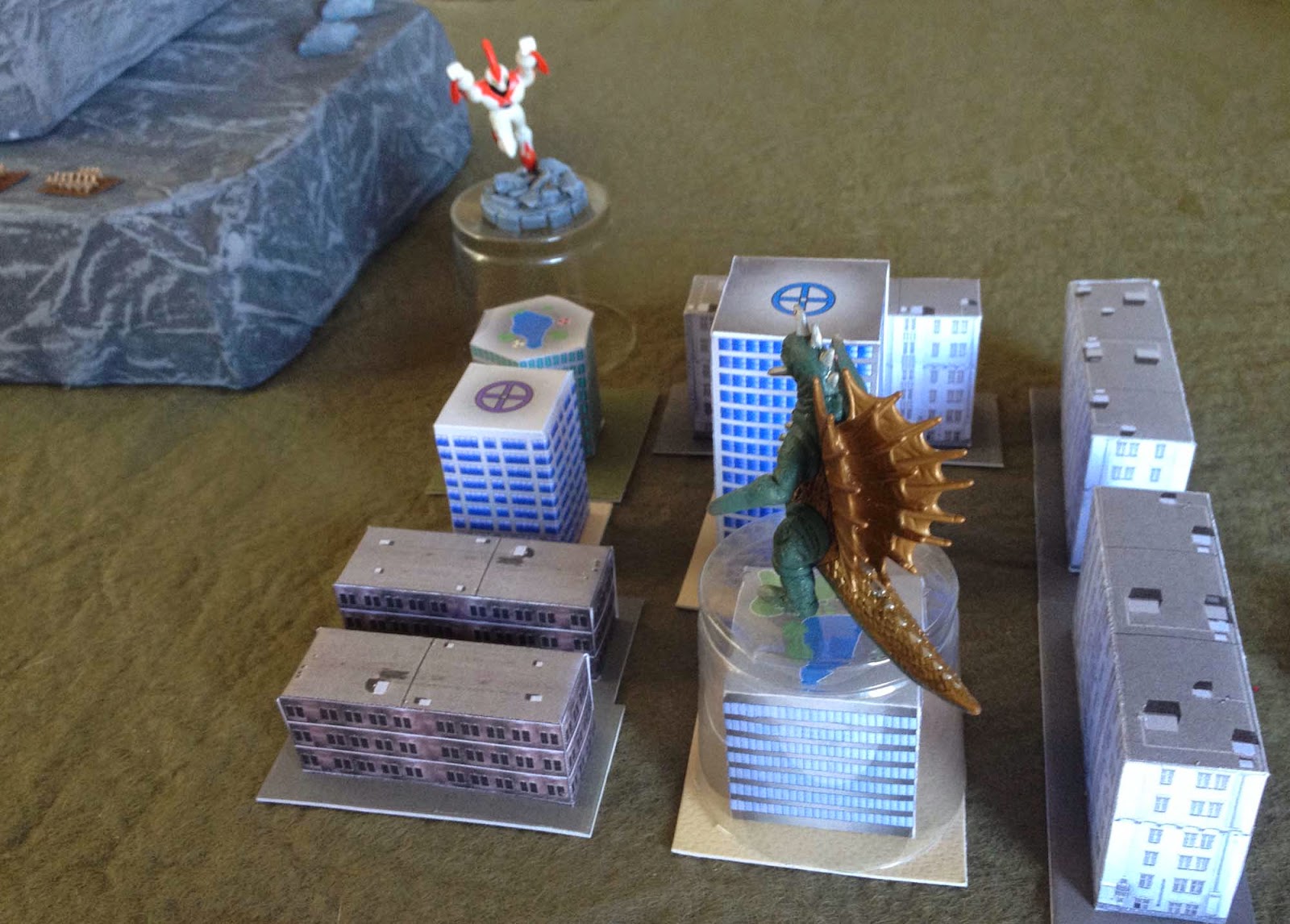 The fight on the mountain between the aliens and the air units was inconclusive, although the tanks did shoot down a jet fighter. 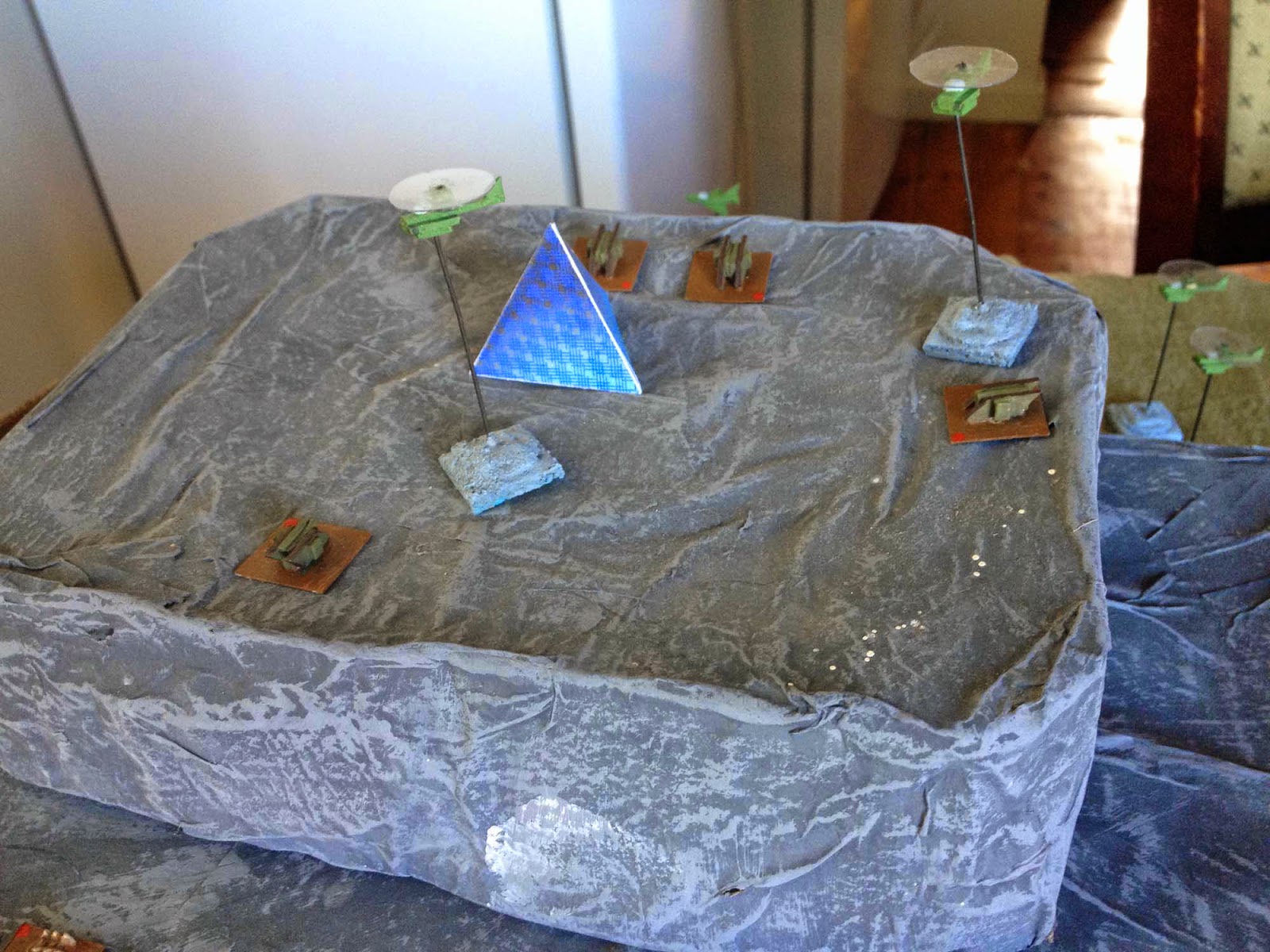 The alien infantry suffered heaps of casualties from the advancing JSDF, owing to some good atomic power rolls, followed by some good shooting. They did better than Valiant Monster Fighter who couldn't make an impression on either of the alien units in this picture. 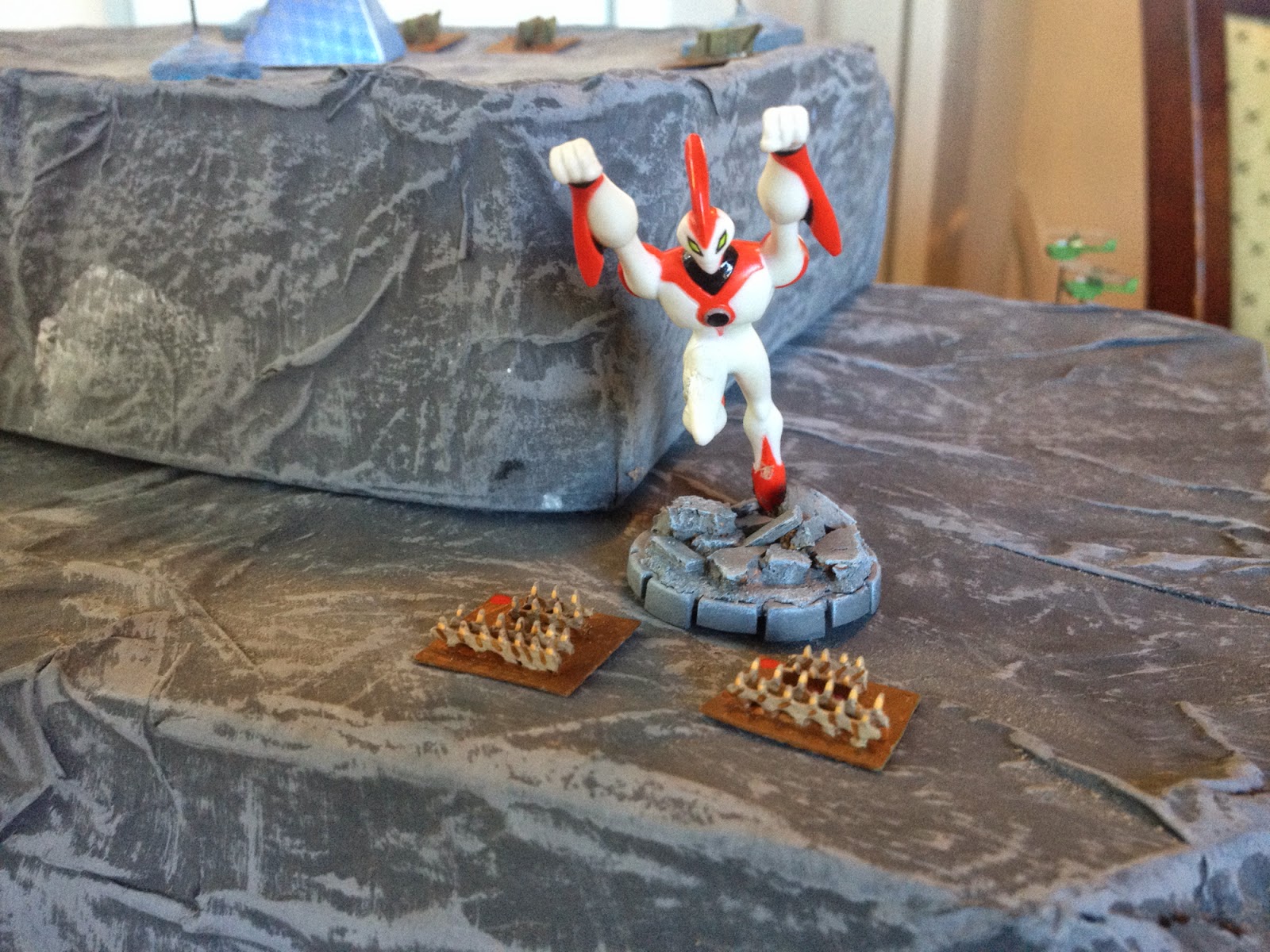 I gave up on the game about halfway through the third turn - it was taking too long to run and some of the interactions between the swarms didn't feel right. I think I need to try swarm vs swarm on a smaller scale first and see how it is best played, before trying it in a complicated game like this. However it was fun planning the game, and the cut-down monster only version I played afterwards was good fun, if a bit one-sided.