Our group is continuing to embrace DBA 3.0, and played a couple more games last night. I would have been up for more than the one I played in, but had been up since 4am and wasn't really thinking straight by the evening.

Caesar and I started the ball rolling by pitting Strathclyde British against Picts. I took the Picts in the foreground, and ended up with no bad going to hide in - just some fields which decided not to be muddy. This is the first time I have ever used Pikes, in DBA or DBM. It showed. 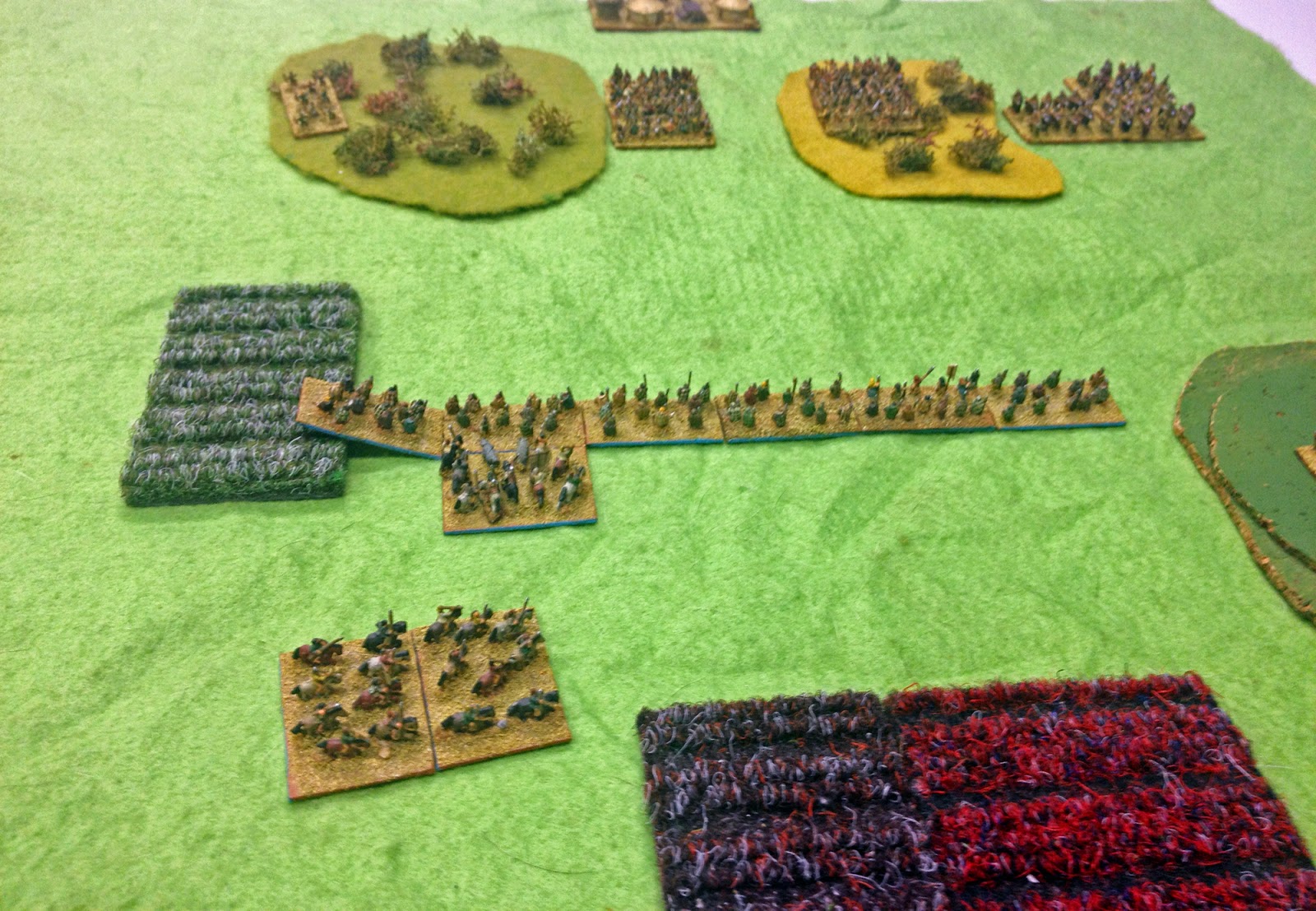 I also thought I was playing HOTT and deployed my Cavalry general behind troops that, in HOTT, he could interpenetrate, but which in DBA just got in his way. 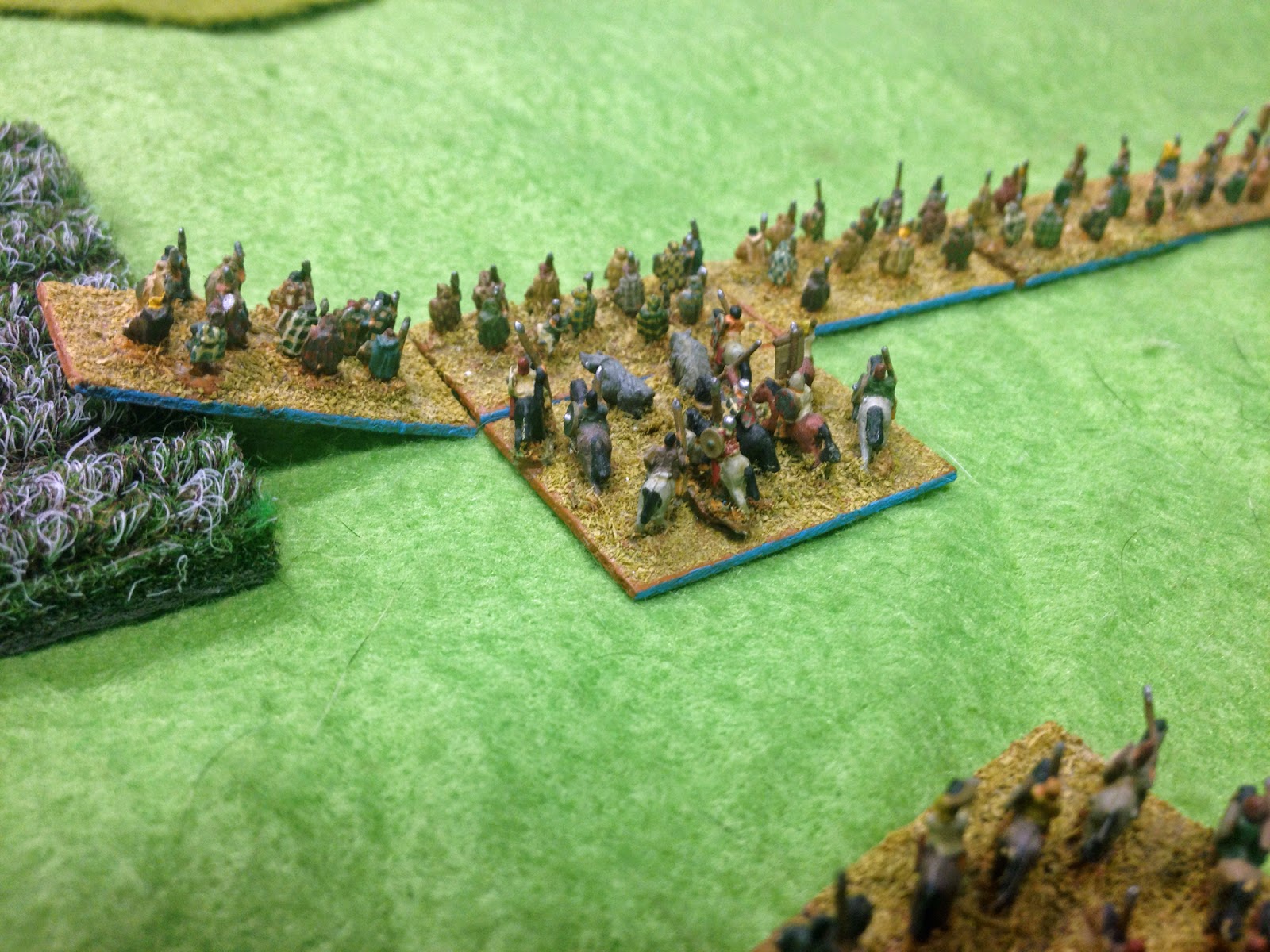 Caesar rose to the occasion, deploying his numerous Spears in the bad going in such a way that he would be unlikely to disentangle them before my troops were upon him. 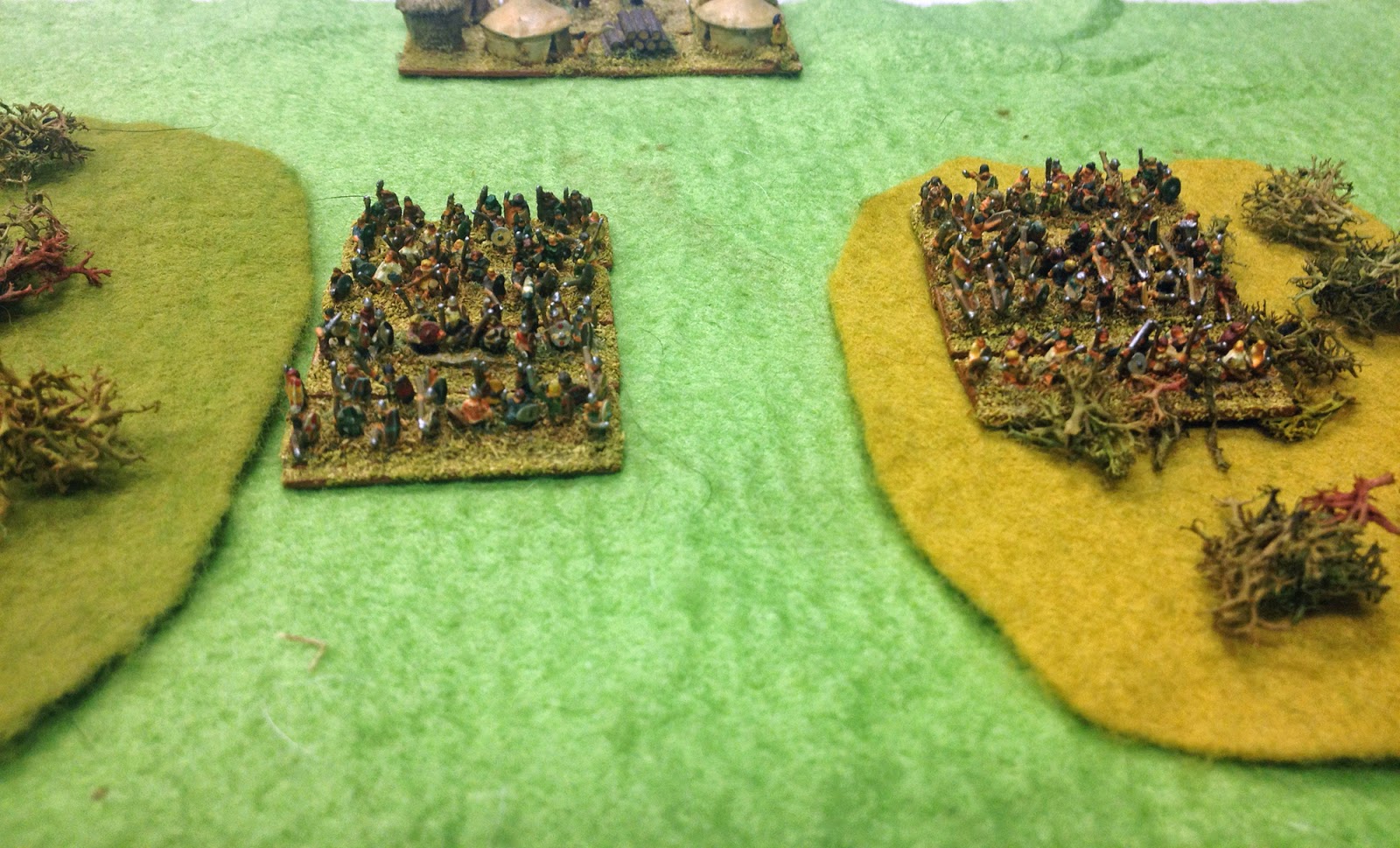 He massed his cavalry, including the general, on his left flank. 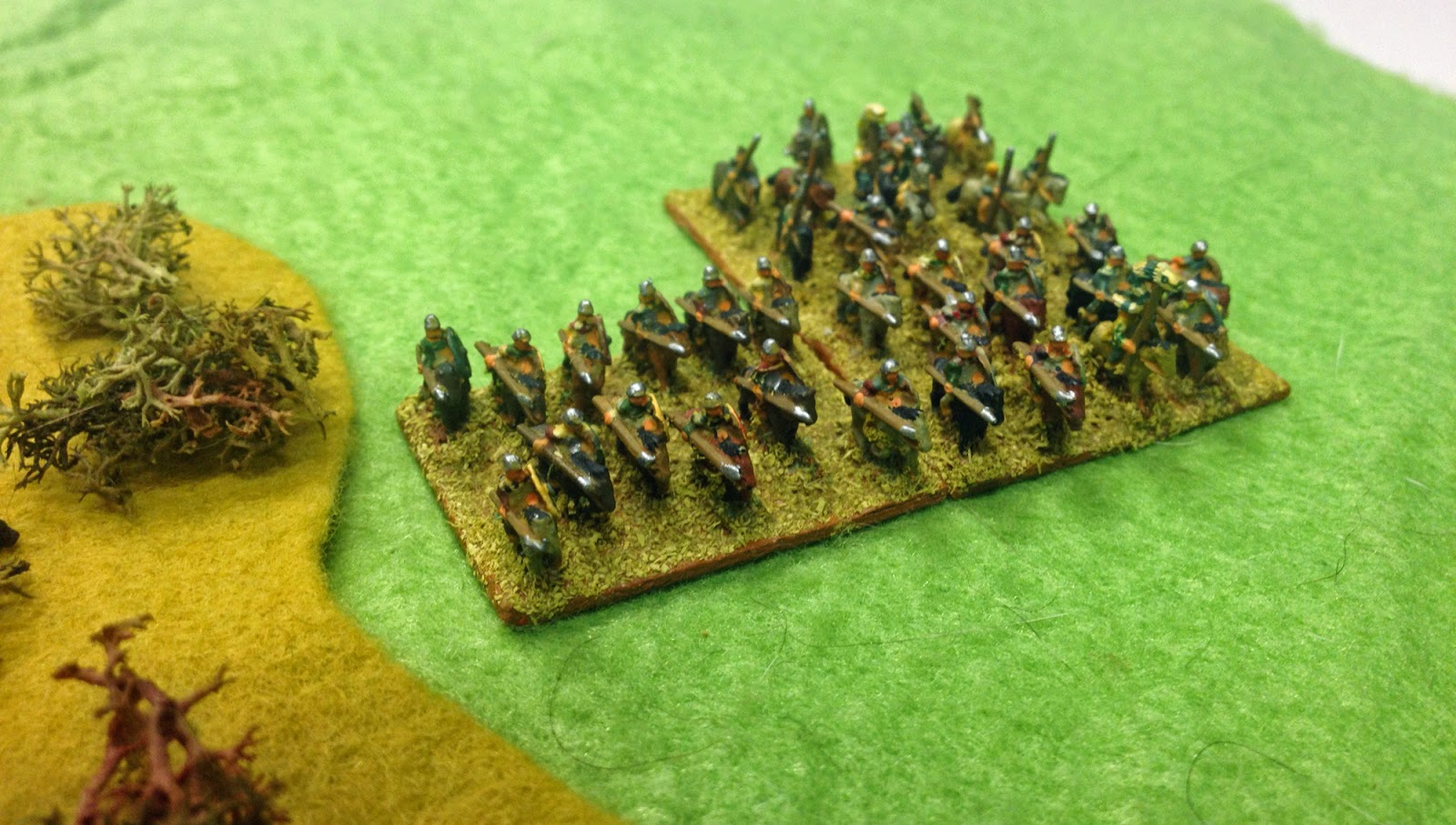 The cavalry attacked a hill on my right on which my vulnerable light infantry were deployed. I brought over some Pikes to help 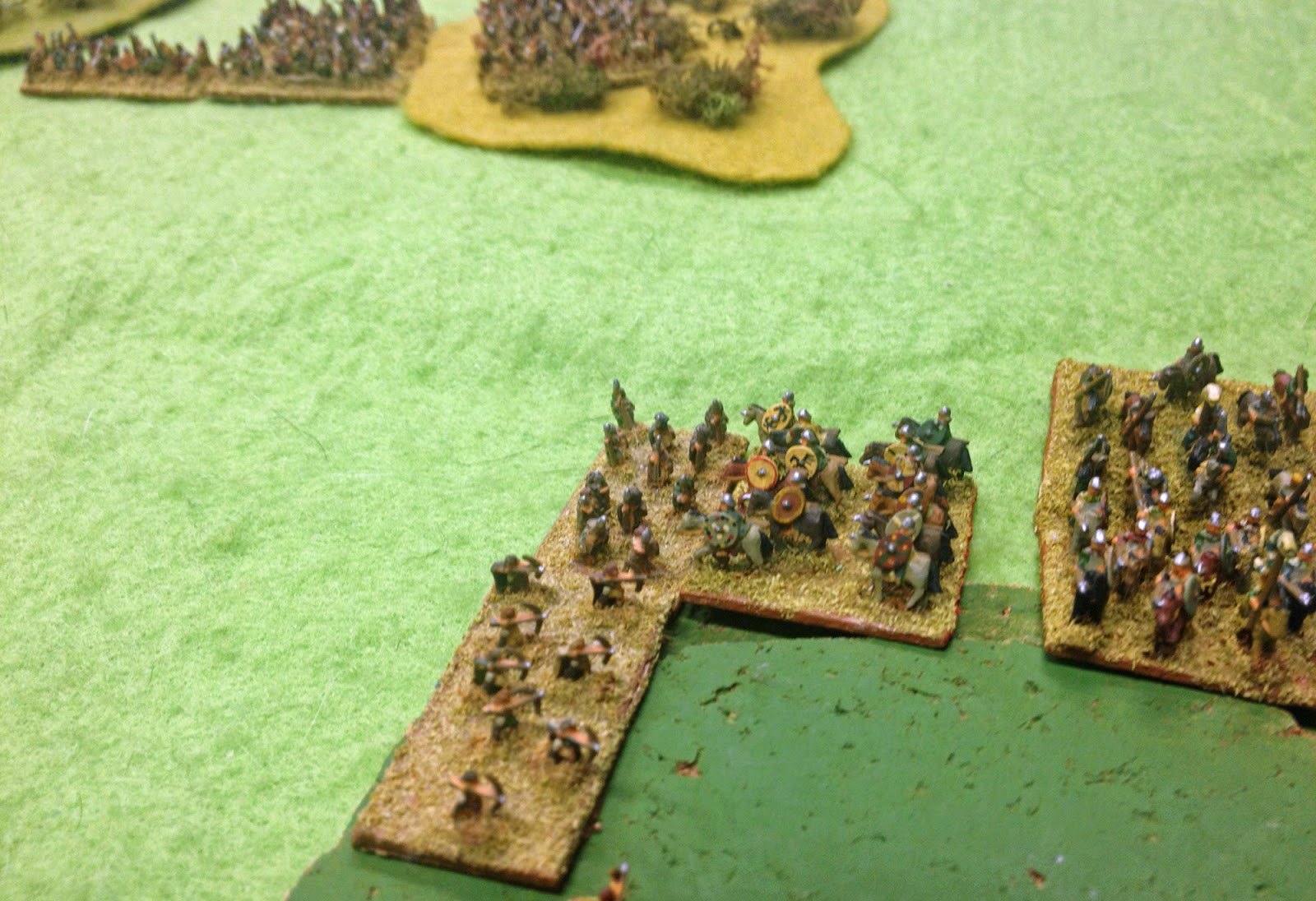 I even switched my light cavalry from the left. 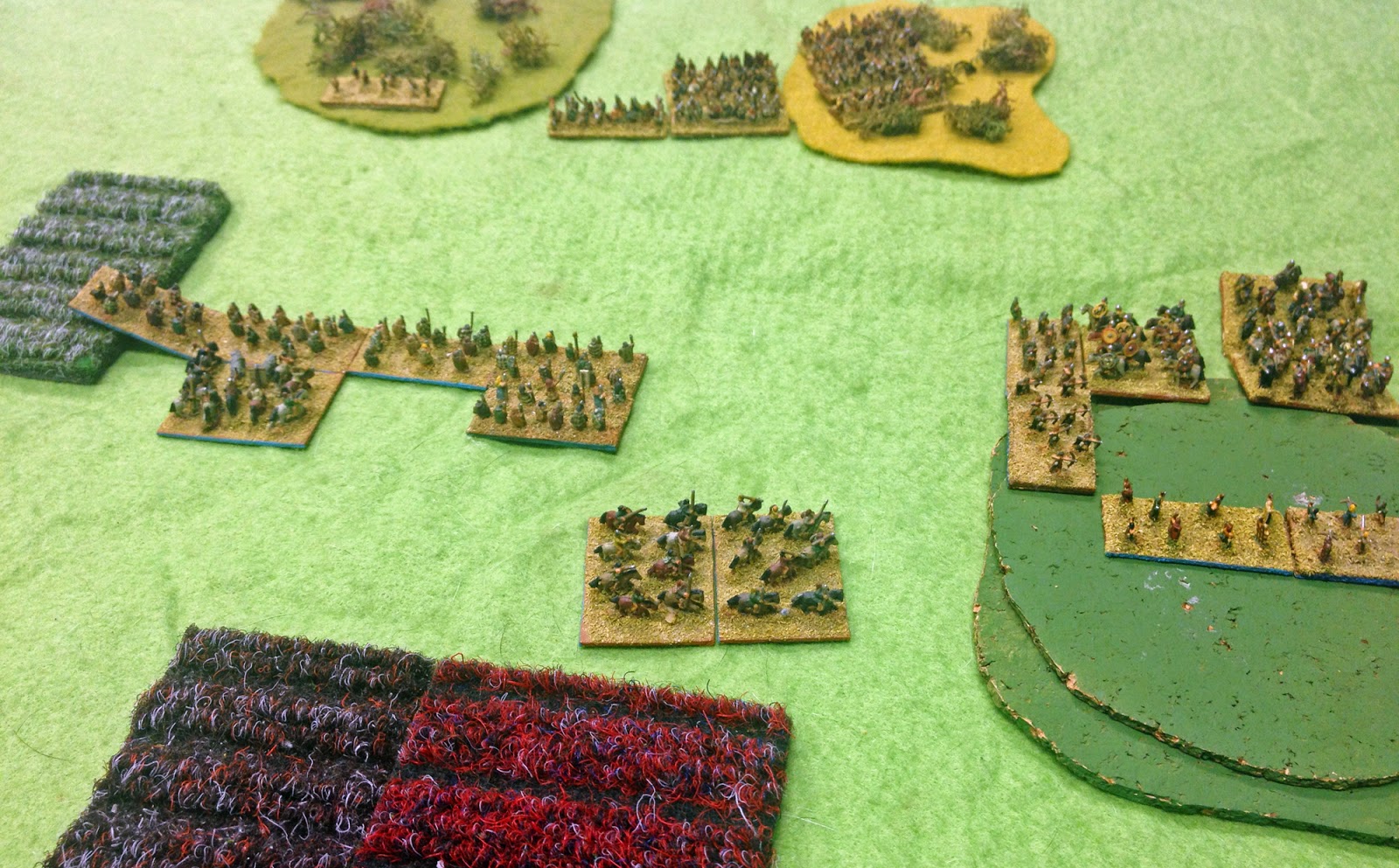 Of course this gave Caesar time to form up his spears in the centre. There was a bit of a shoving match. 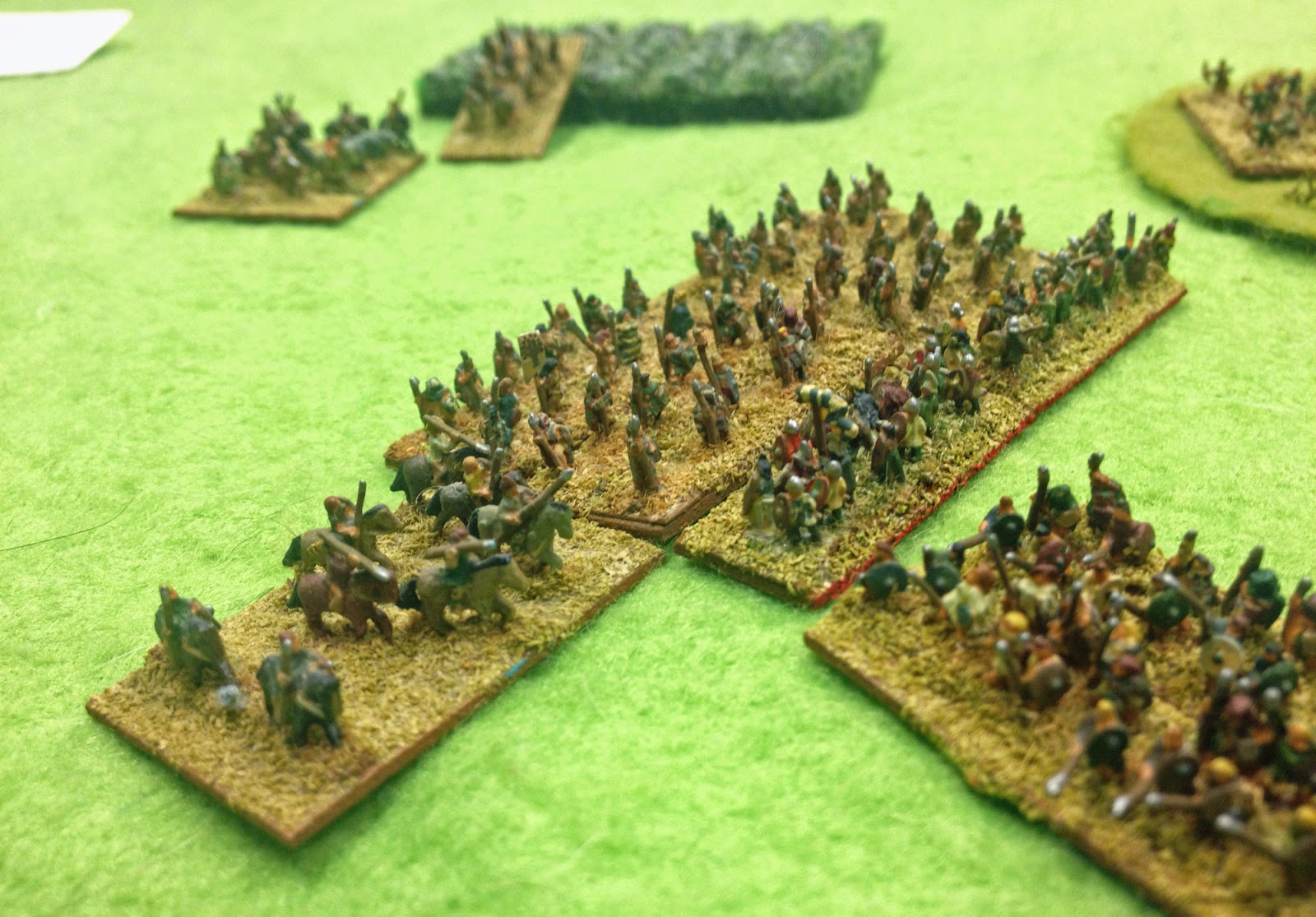 Overviews of the battle. Neither of us seemed able to convert position into kills. 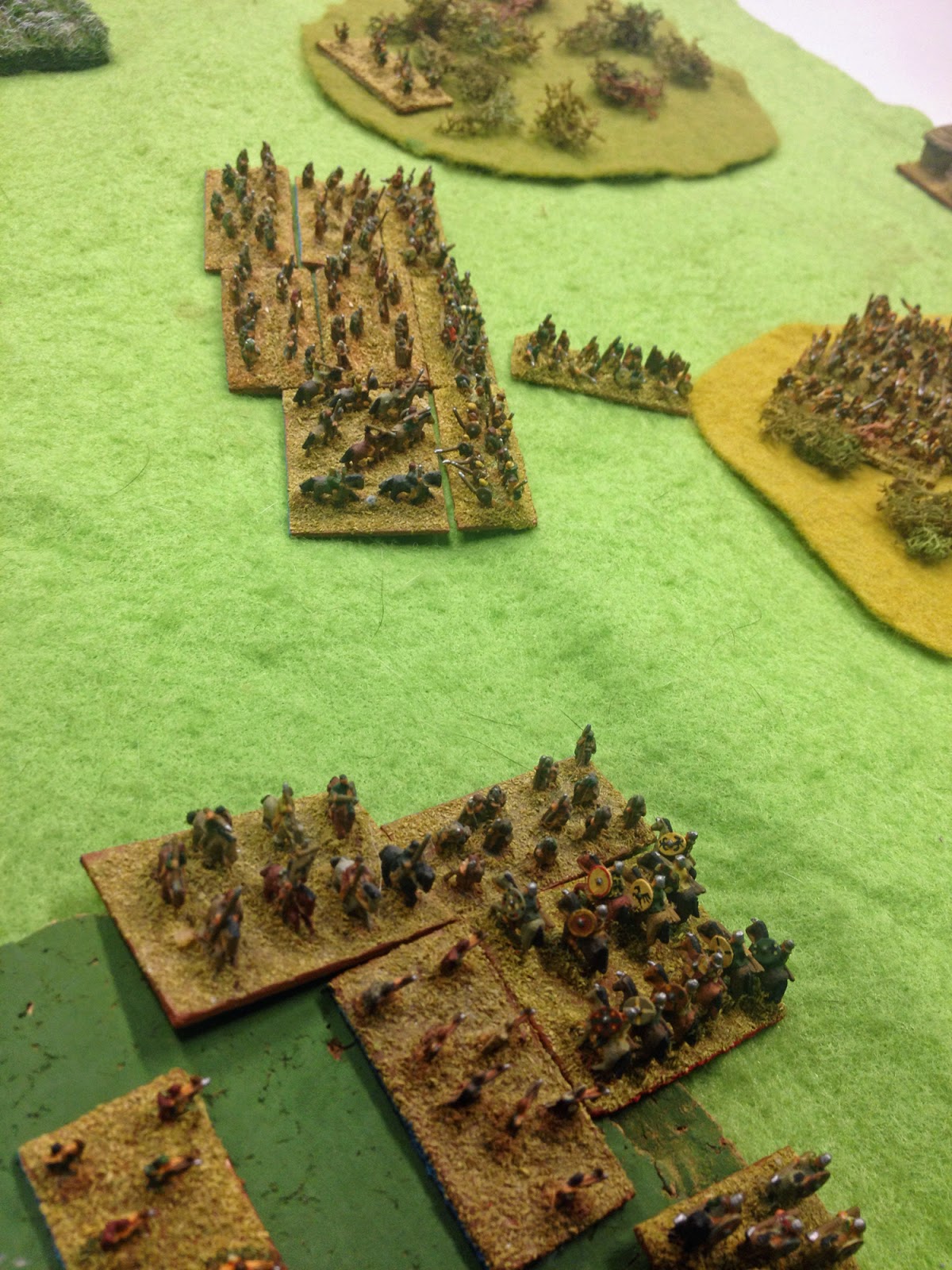 My light infantry even held out on the hill ... 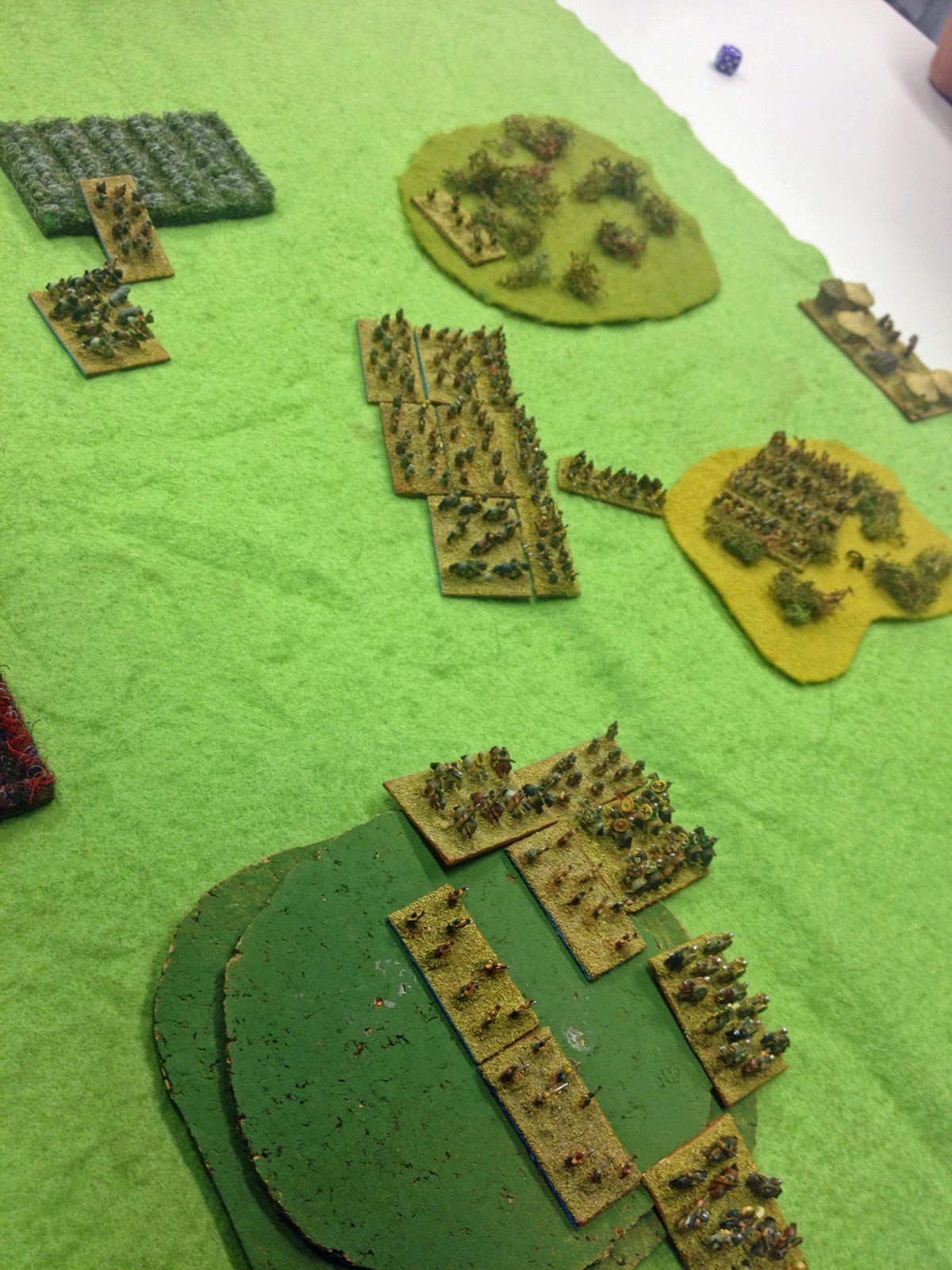 ... before surrounding the Strathclyde general and slaying him. 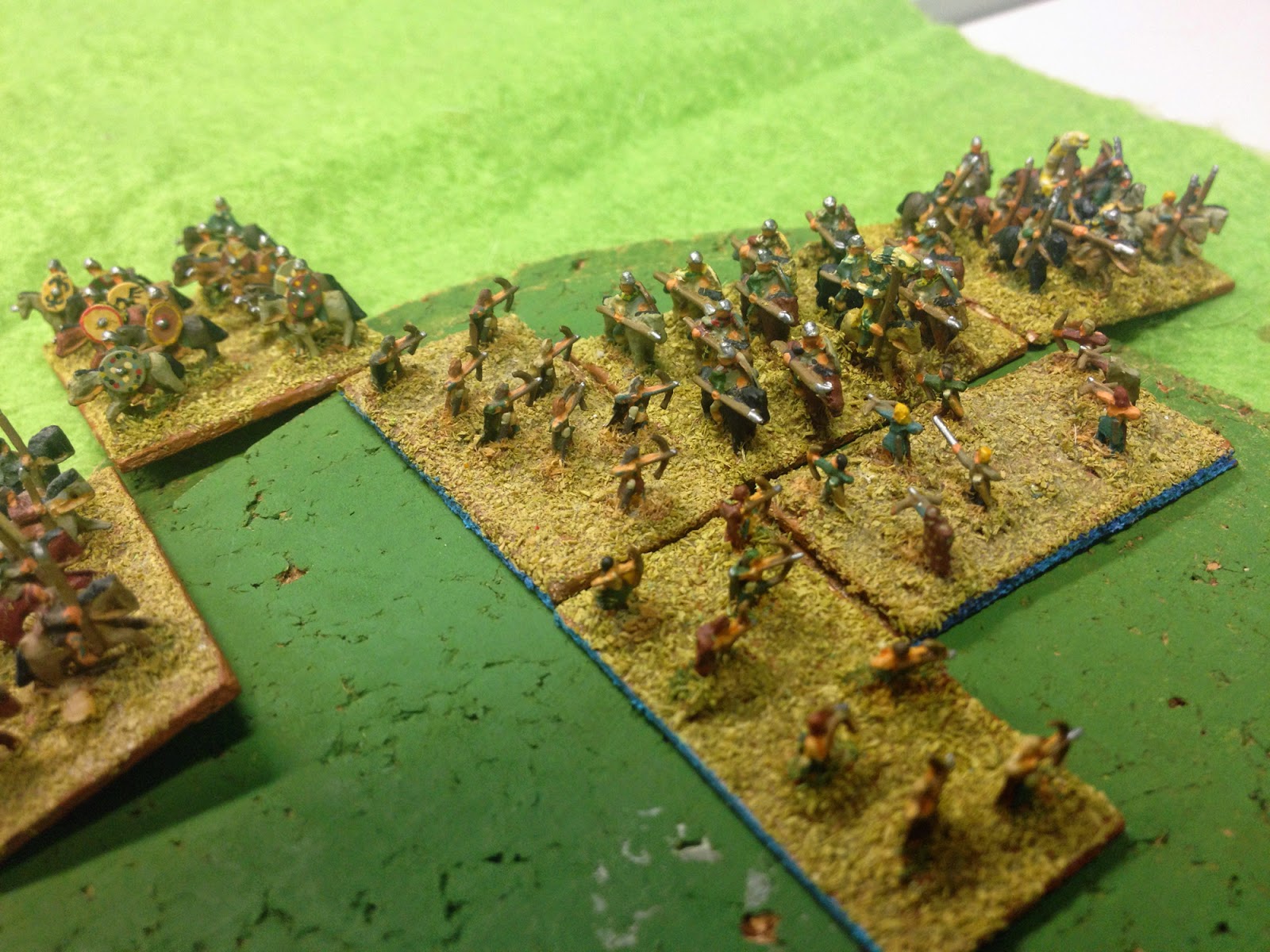 But that was it. Bolstered by my success I tried the same trick on some more cavalry, which didn't die and instead killed all my light infantry. One more element fell elsewhere and the Picts broke. A silly mistake on my part; did I say I'd been up since 4am?

Caesar and Peter the pitted War of the Roses English against some French. This battlefield featured lots of fields ... ... and they turned into a right old bog. This gave the artillery something to hide behind. 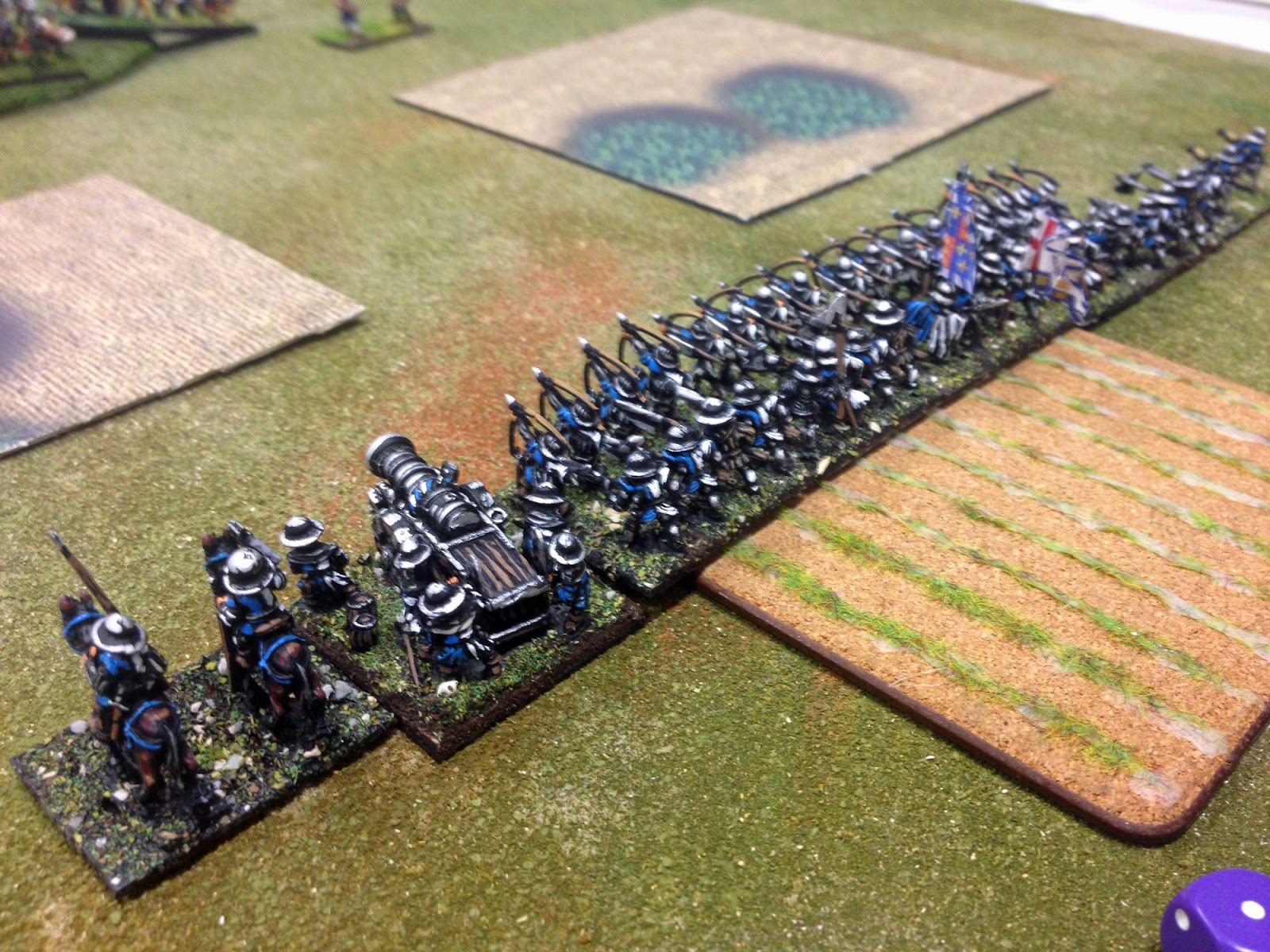 I didn't follow the game closely - I was looking stuff up in the rules - but Caesar's English eventually whittled the French down to give them a victory fit for what was, in fact, St George's Day. Hurrah! 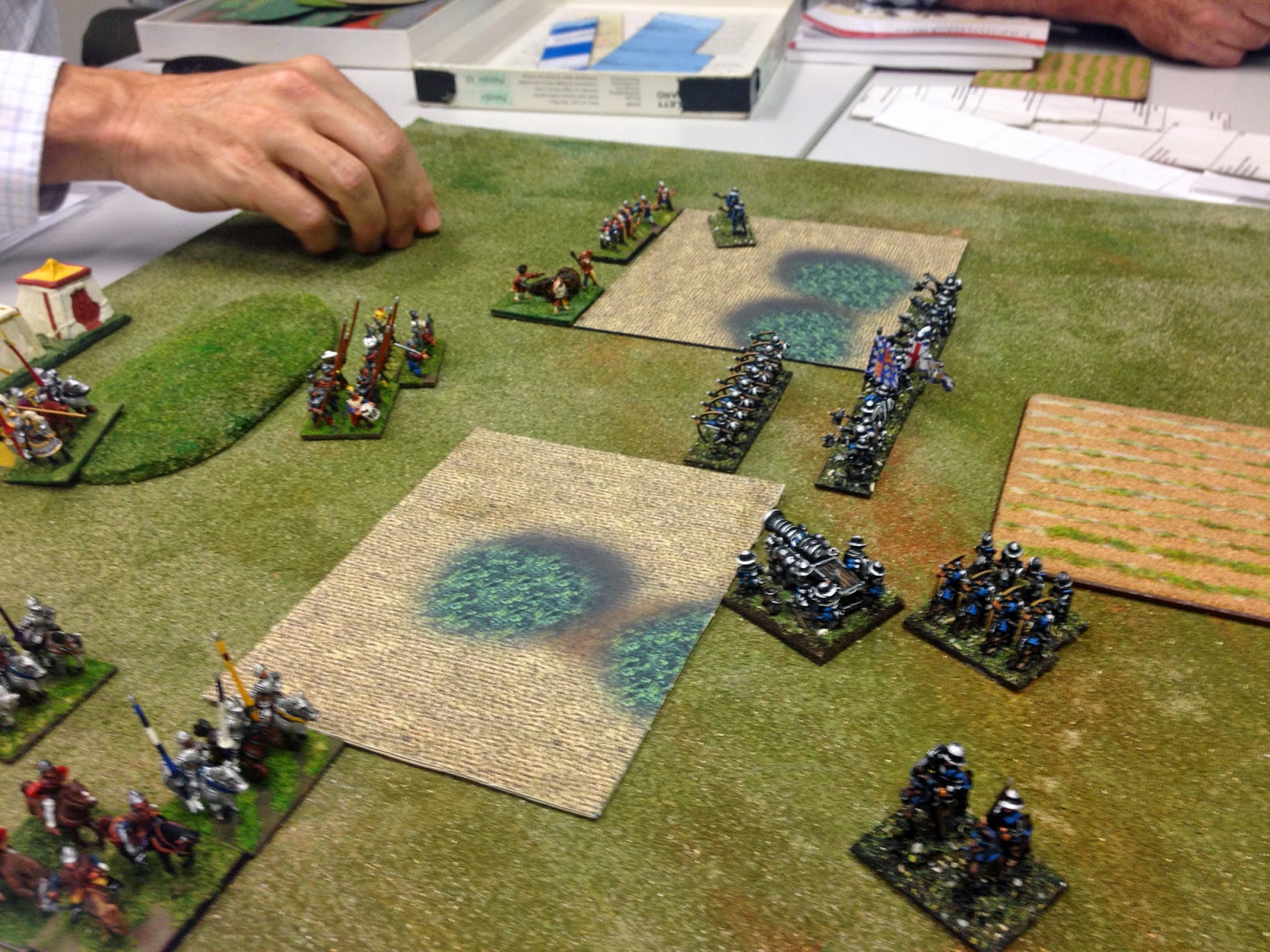 We're really liking DBA 3.0. The interactions and fast movement are taking some getting used to, but we're getting there slowly. Not having to unlearn DBA 2.0 helps - most of us found it dull and never played it - but we're fairly well-versed in HOTT and have trouble with the differences there. None of us are as young as we used to be.
Posted by Kaptain Kobold at 21:55