Over the years I have accumulated a lot of 6mm ancients figures. I have boxes of them, painted and unpainted, many of them from the days when I played WRG 7th Edition and early incarnations of DBM. They are a mix of early Dark Ages armies, and various enemies of the Early Imperial Roman list, plus the Romans themselves. Since those days I have rebased them for DBA 2.0, but never got too far with that, and also HOTT, which gave me many neat little games if you could live with some of the troop classification issues.

Now we're enjoying DBA 3.0 I though I'd look at putting together proper armies for it. As it is I can field a umber of armies straight out of the box, but what I wanted to look at was all of the options. And they are considerable. Whilst a DBA army consists of twelve elements, if you want all of the options in a typical army you need a few more than that. This isn't true in all cases - my Early Saxons have no options at all. But some armies offer a fair bit of choice. So I picked three today, looked at what I had and set about finding figures to do as many options as were feasible.

First up we have the Parthians. This is one with a lot of options, because whilst you not only have choice as to how you mix the light horse and the cataphracts, there are various infantry options you can go for as well. To be able to field any legal Parthian army you actually need 23 elements. I decided to skip the regular auxilia for now (as I couldn't find any suitable figures, although I have some ideas), and just went for this:

A lot of my very old elements are based on very thin card indeed, so can be chopped up for glueing to the mounting board I normally use. This is why there are blobs of green on white bases. As part of this exercise I will tidy up the bases for each army.

Here are the cataphracts. I had to create one more element of these solid monsters, and it'll need a short session on the painting table to bring it into line with the others. 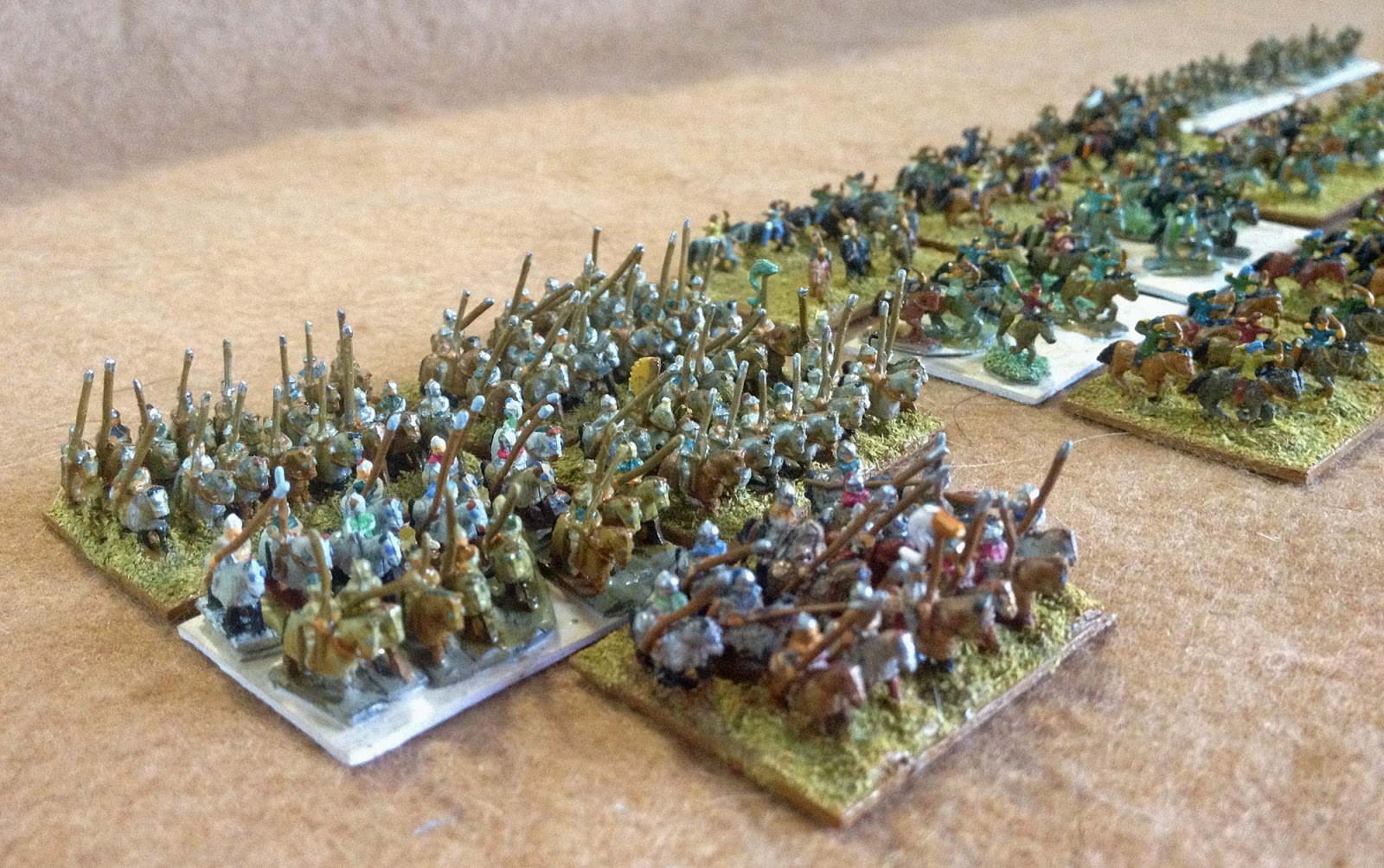 A few elements will need some paint work, but not too many.

Here are the horse archers. They are pretty much good to go aside from the bases. 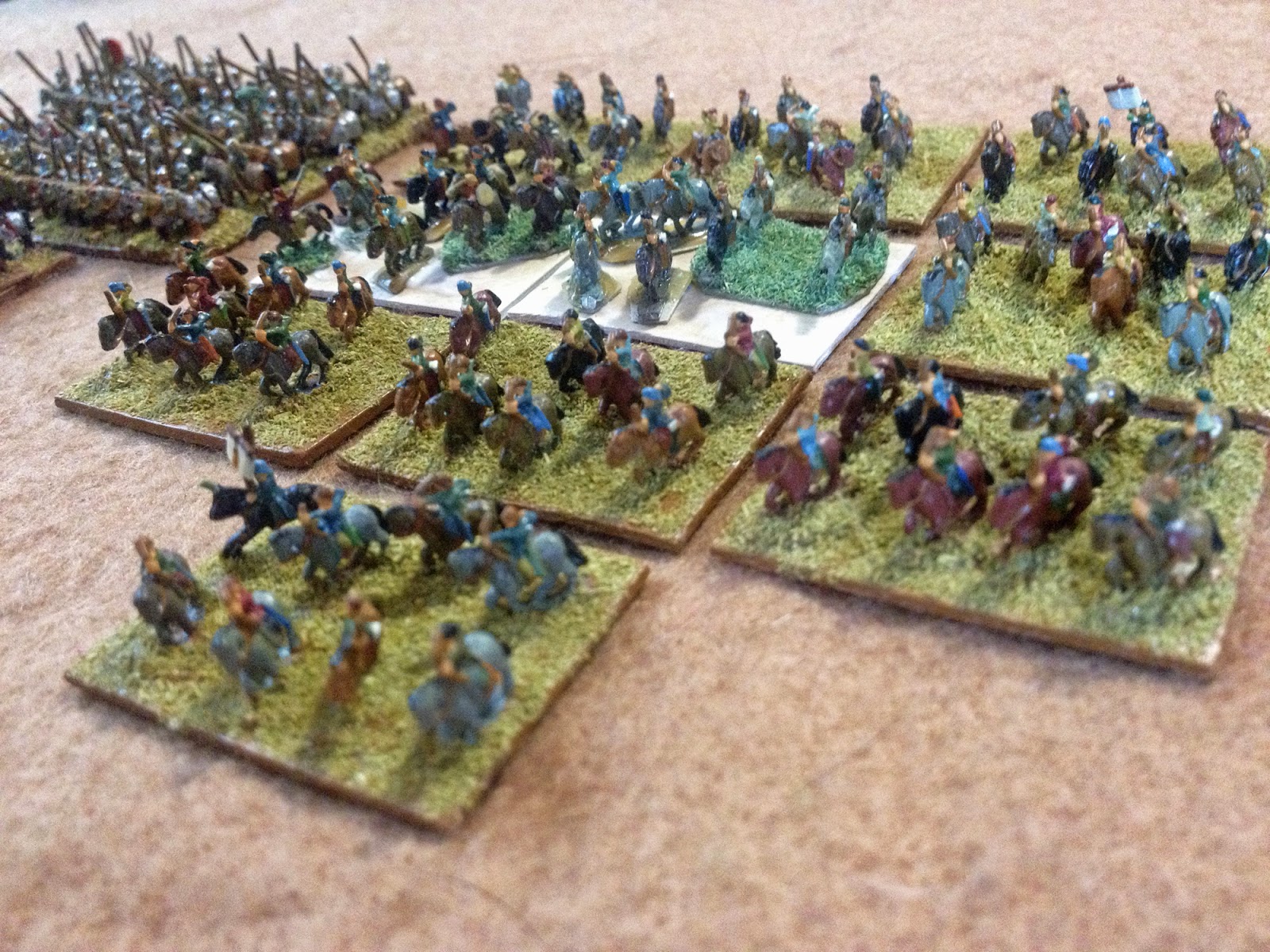 Parthian infantry. I'll do some painting to make them look more consistent, and the bows need a bit of work since I co-opted them from another army entirely. 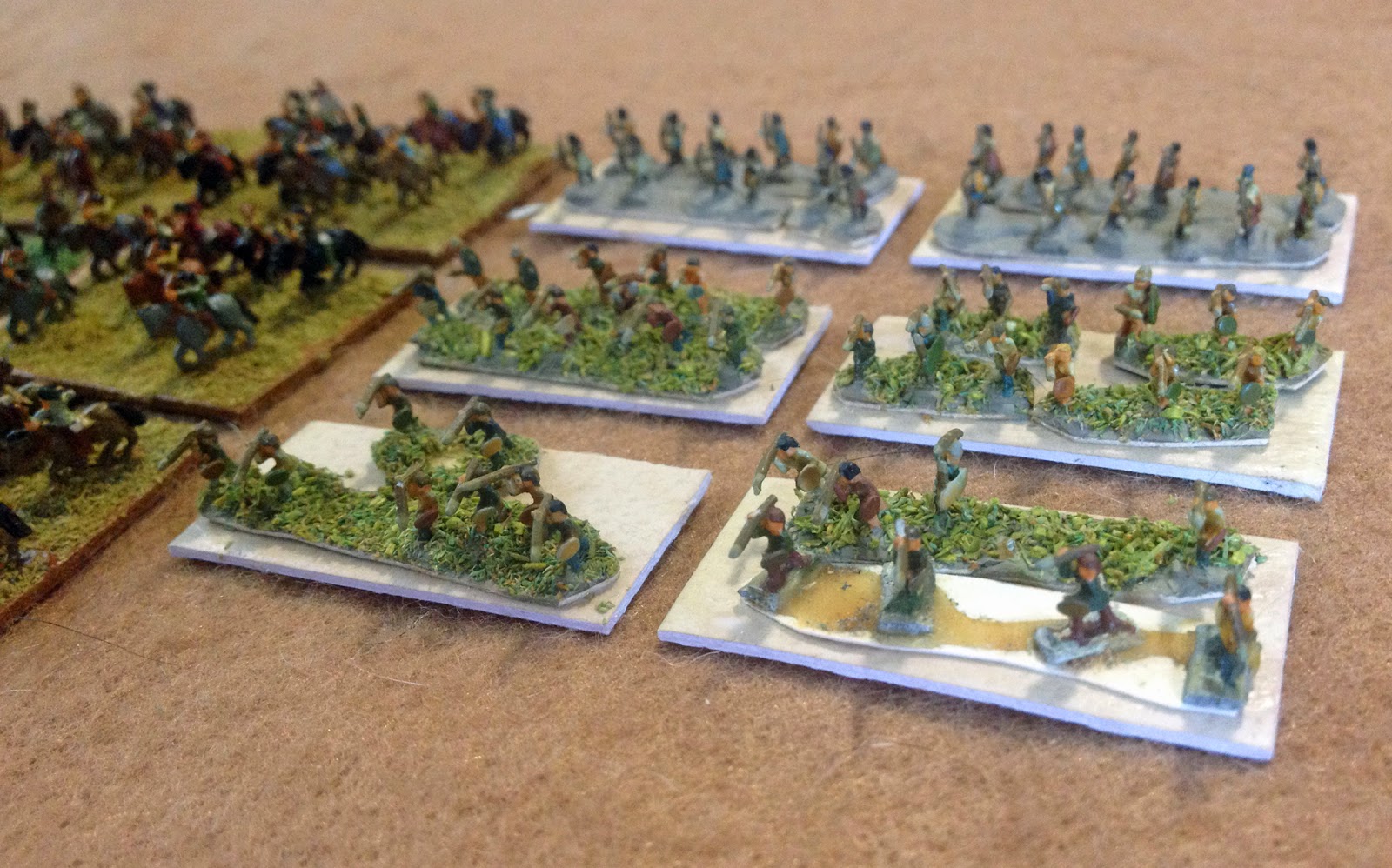 The second army to get my attention is the Early Imperial Romans. Here's almost everything you need. The only elements I haven't done are the light camelry (I don't have the figures), one element of gladiators (which seemed a fairly specific option) and the lance-armed cavalry, which I have but need major repairs beyond the scope of this exercise.

The legionarii are all good to go. Behind them are some barbarian auxiliaries, and to their side some slingers. As with the Parthians everything will get consistent bases. 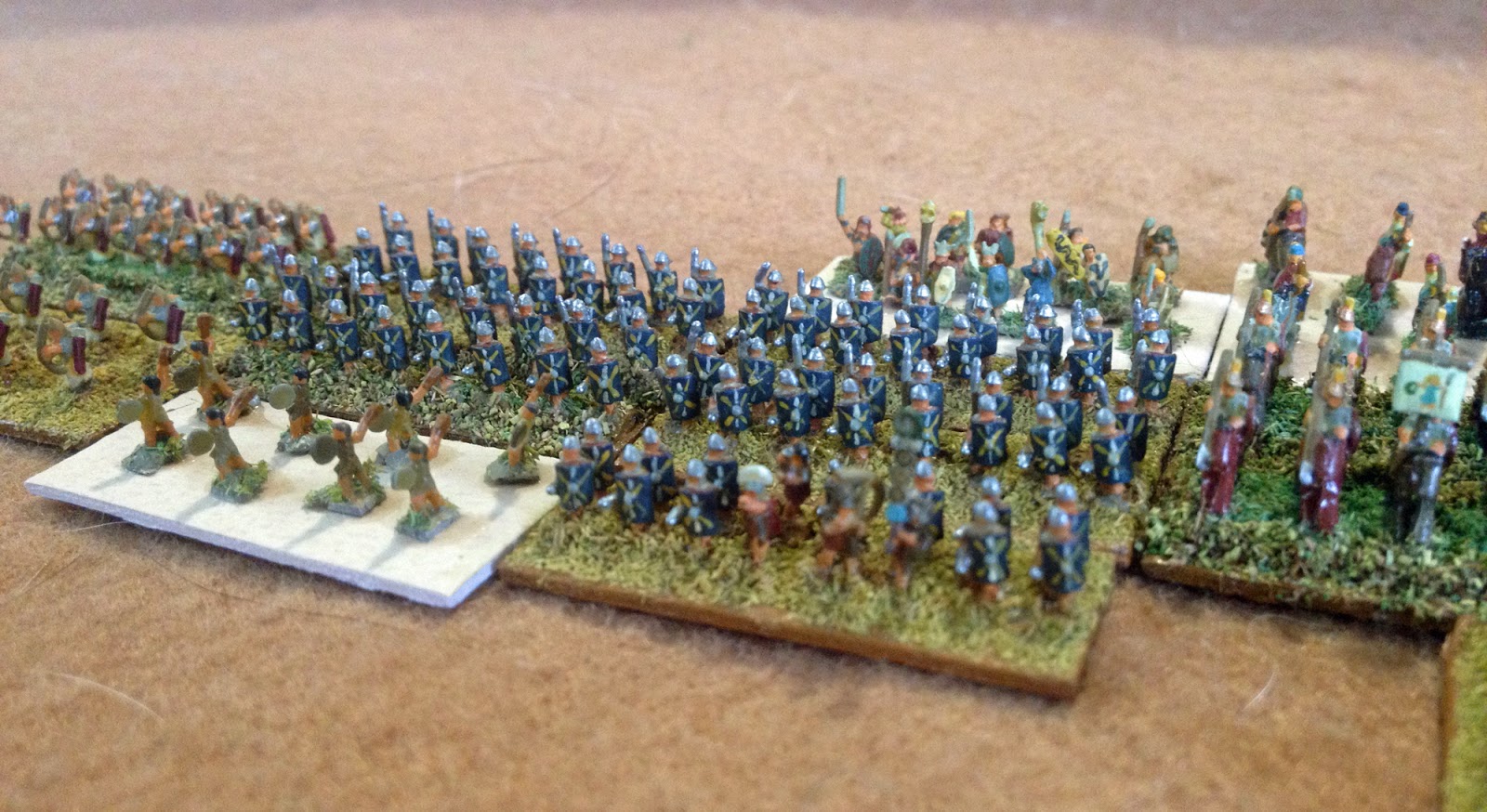 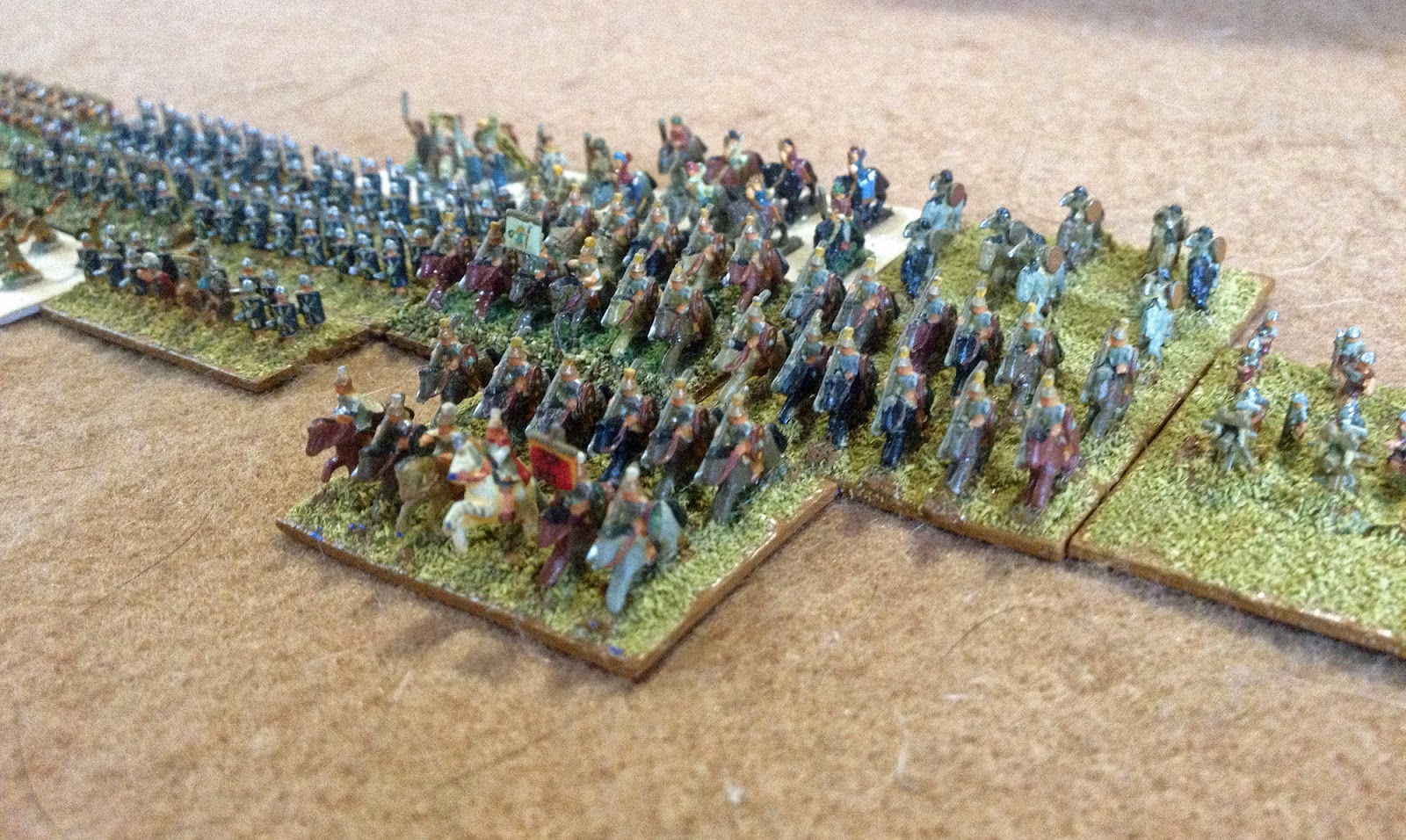 Auxiliary infantry. All told, to field all options in an Early Imperial Roman army you need 22 elements. I have 19. 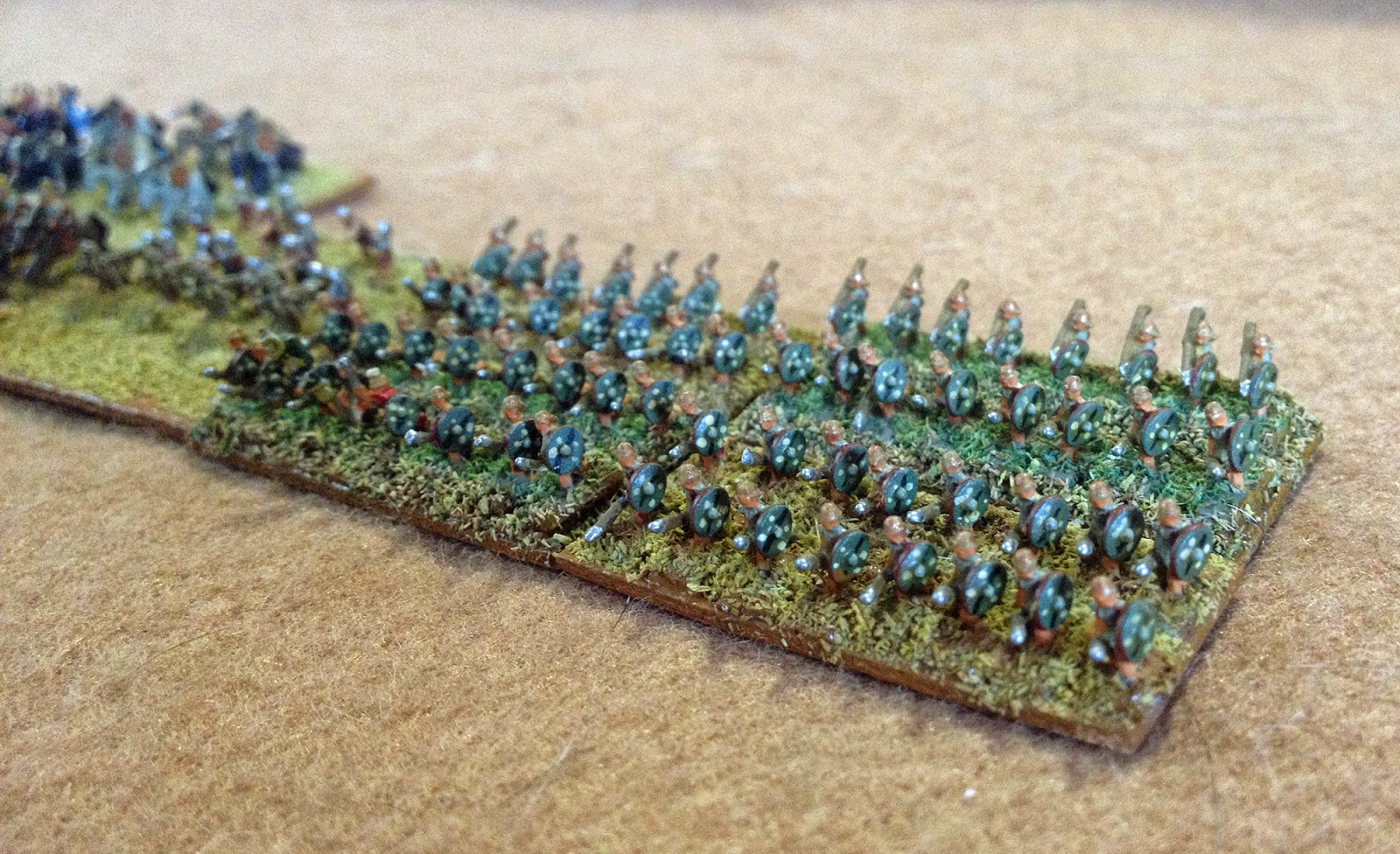 Finally here are the Meroitic Kushites, the only DBM Book 1 army I have, and a legitimate opponent for the Romans.

Lots of spears. Two of these elements will be 'converted' into the blades the army needs; the conversion will mostly be via a different paint-job. 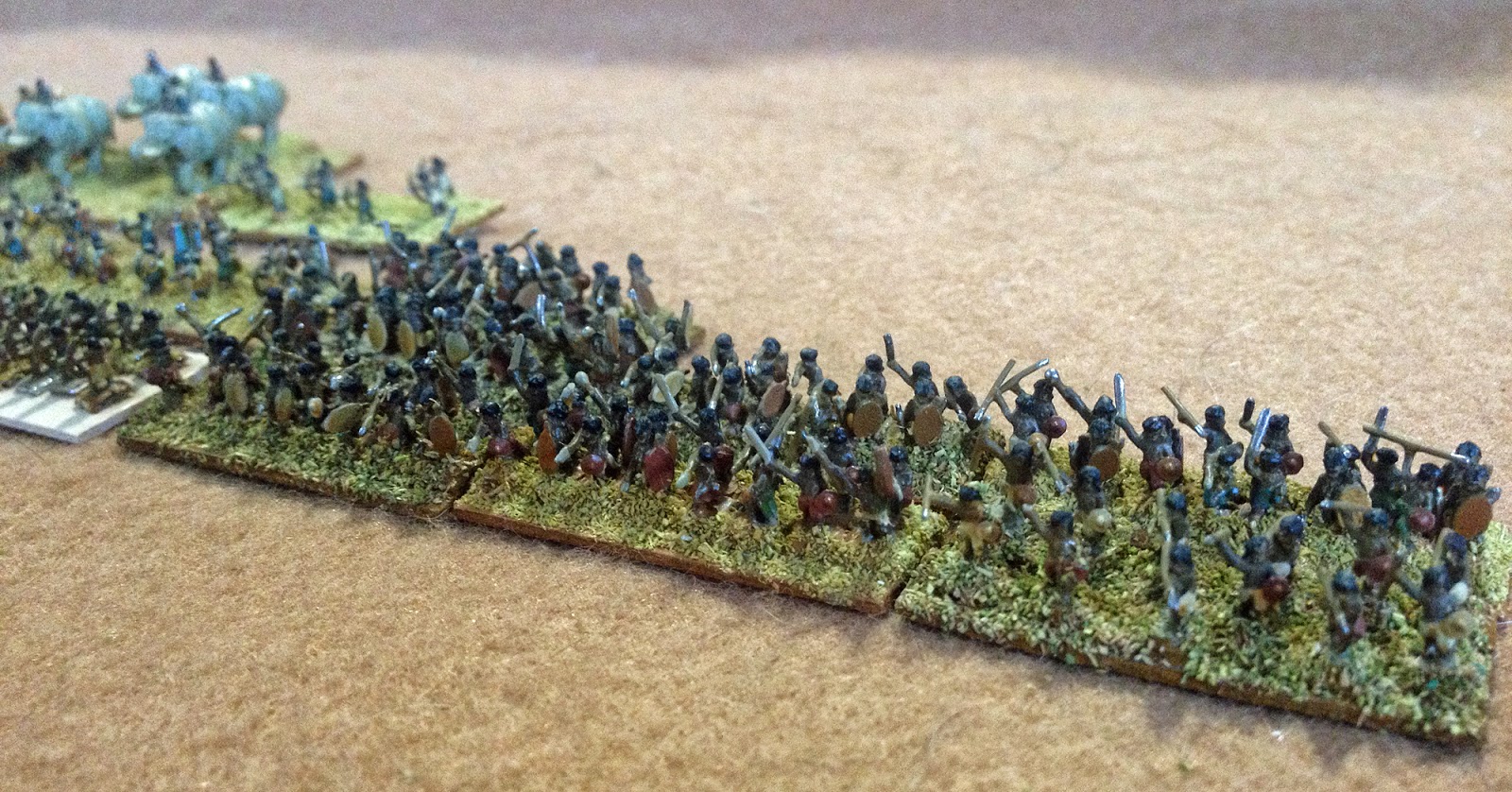 The Kushites get the option of fast bow and solid bow in DBA 3.0, so I have made some close-order elements. 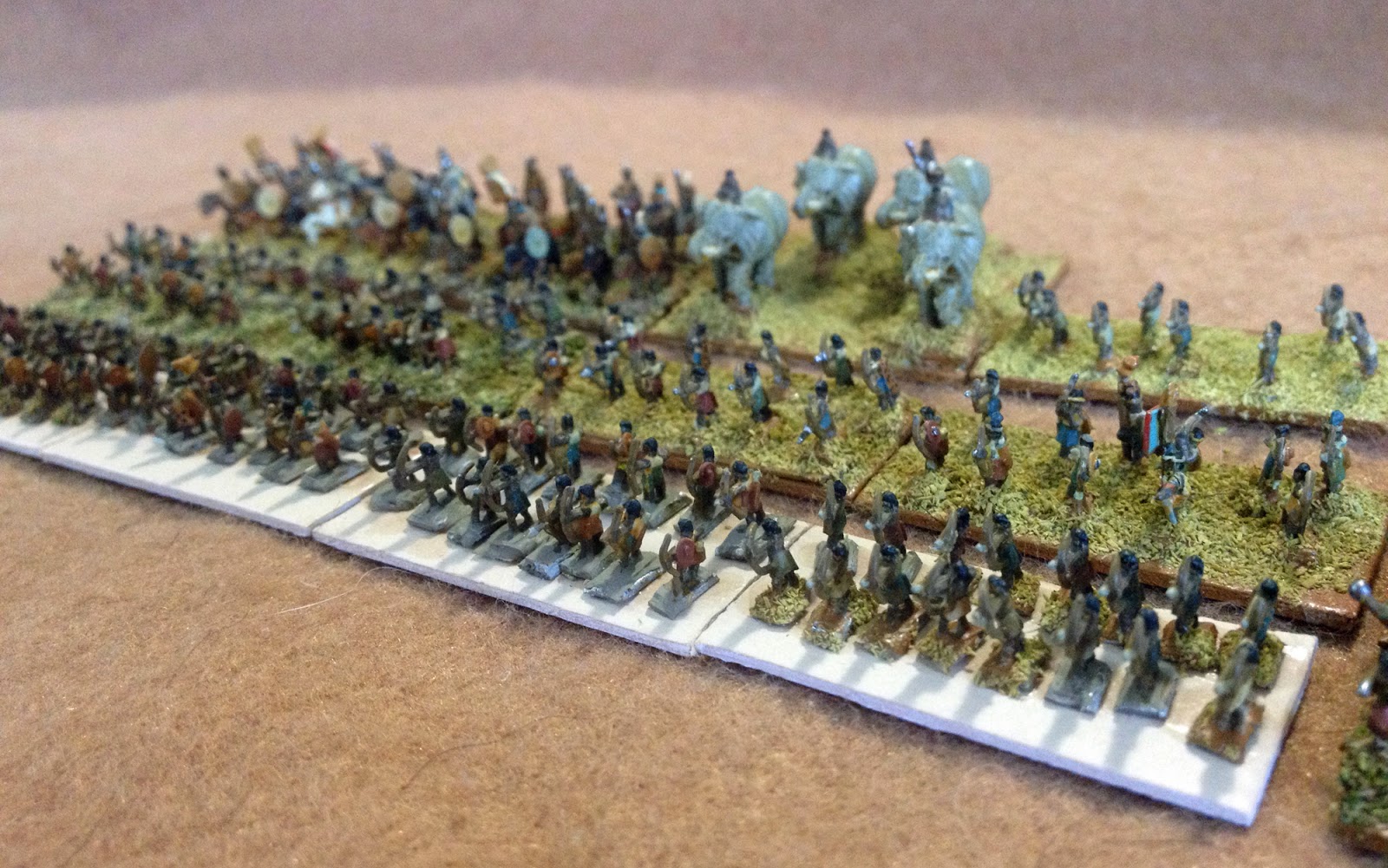 The elephants and cavalry are good to go, aside from the bases, although I may tart up the general's elephant a little. Four elephants on one element looks nice, I think you'll agree. 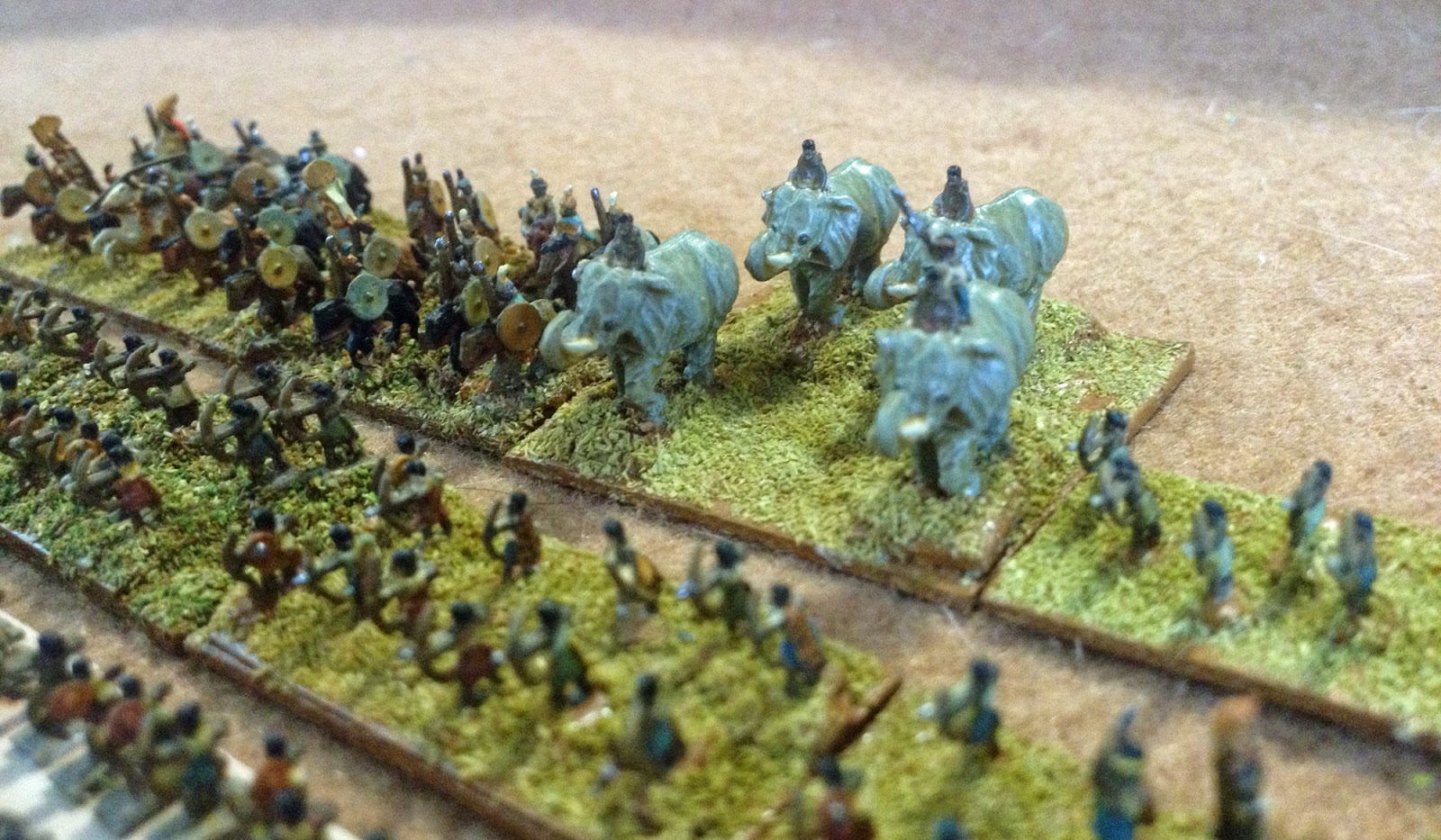 All of the elements are now organised, and the basics of the bases is next, I think.
Posted by Kaptain Kobold at 16:00