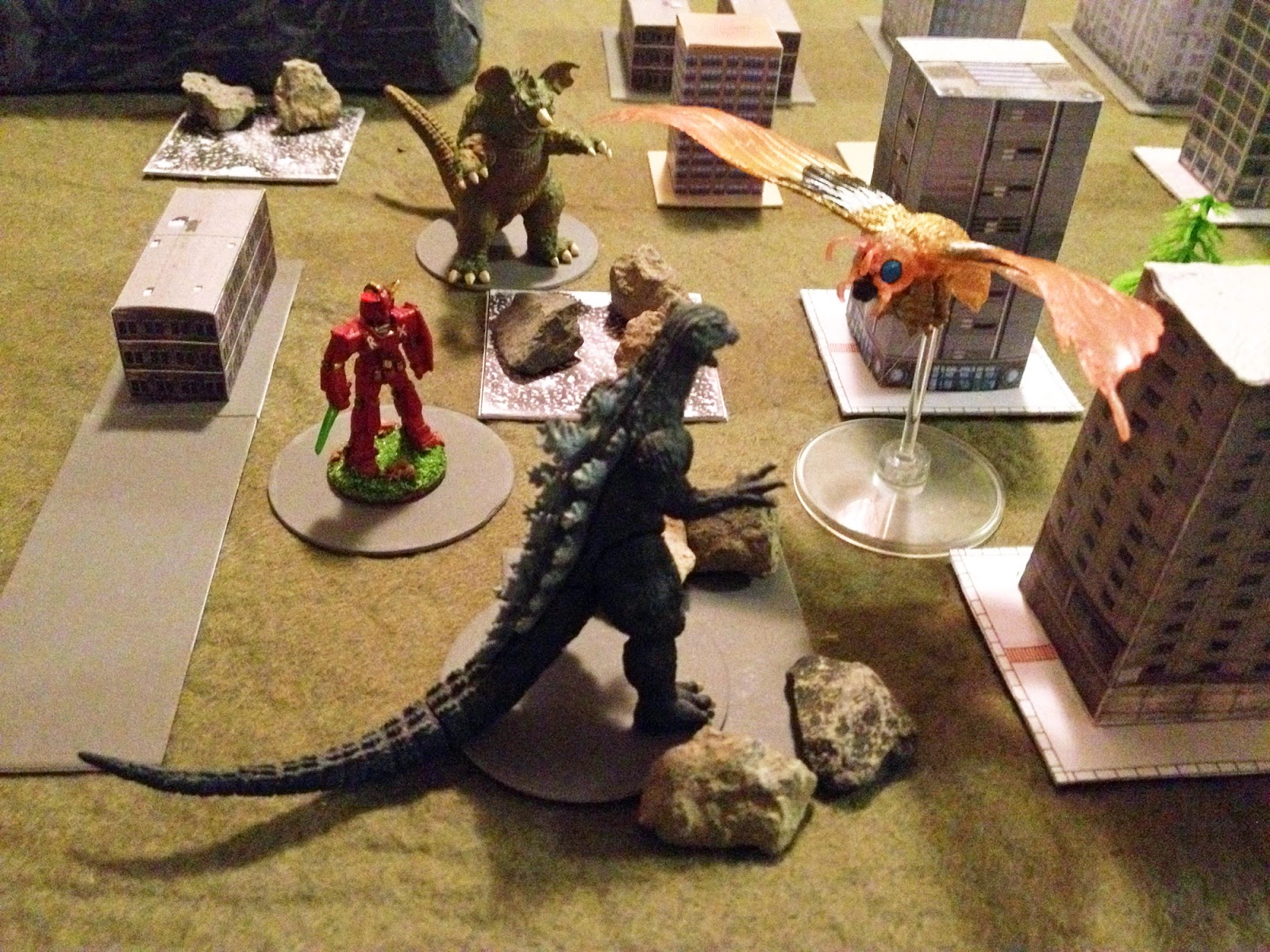 The victory points system in Giant Monster Rampage gives monsters points for both inflicting damage on other monsters and for destroying buildings and other property. This is fine if your game is a free-for-all where all of the monsters are competing to wreak as much havoc as possible, but works less well in a game where one or more monsters is defending a city against an attack. This is a shame, as that kind of setup often tends to be the theme of a lot of films.

The problem is that defenders obviously shouldn't really score points for property destruction, but this then restricts their source of victory points to wounding other monsters. Attacking monsters are at an advantage because they have more ways to score points. The possibility of giving the defenders points for buildings not destroyed seems an obvious solution, but it requires a fine balance in  how many buildings you set up at the start of the game - too many and the defenders are obviously at a major advantage. In addition there are two kinds of defenders - those that are truly defending the city, such as military units or piloted mechs, and those that are really just defending it in passing whilst opposing monsters that are out to destroy. This second category covers Godzilla in a number of his films, plus monsters like Mothra and Gamera. They aren't concerned with how much destruction they cause, but it's not an aim; they shouldn't get points for it.

So the trick is to come up with ways of setting up a scenario which allows all types of monster a way of scoring points whilst maintaining their particular aims.

My idea at the moment is to categorise the three types of monster available in a game. These are:

Attackers - The standard monster, out to cause as much destruction as possible, whether on other monsters or on the city itself.

Neutral Defenders - These are monster that are indifferent to any property destruction; they aren't out to prevent it but gain no points for it. They are out to defeat other monsters, specifically Attackers.

Active Defenders - These are monsters that are seeking to stop the city being destroyed.

When setting up a game at least half of the monsters must be Attackers. The other monsters can be Attackers, Neutral Defenders or Active Defenders. The amount of destructible property should be based on how many potential attackers there are and how long you want the game to last. I usually play games to a turn limit, and would suggest a minimum of three building sections per turn multiplied by the minimum number of possible Attackers. So, for example, in a 10 turn game with four monsters at least two of them must be attackers, which would give 2 (monsters) x 10 (turns) x 3 = 60 building sections minimum. This should be more than enough.

Each type of monster scores points as follows:

Neutral Defender
Score 1 point for each wound inflicted on an Attacker or Neutral Defender only
If they KO an Attacker, score points equal to half of that monster's original Wound total (rounded up)
Score 0 points for each building section they destroy, but track the total (see Active Defender below)

Attackers can avoid conceding building destruction points to Active Defenders by only going after other monsters. However buildings are a soft target; easier to hit and generally less tough, so are an attractive option.

I am testing these ideas out at the moment, and may need to tweak the balance, but it should allow for games where there are different agendas at play and in which the correct cinematic roles are maintained. Obviously it is aimed at  the traditional 'City Being Stomped' kind of game. Other scenarios would have more specific objectives.
Posted by Kaptain Kobold at 11:52