... they get victory points.

I've been playing some more games to try out my victory point system for 'Giant Monster Rampage'. Here's a few shots of one of them, featuring Godzilla and Gyaos as Attackers, Gamera as a Neutral Defender and Kiryu as an Active Defender. This game was important because it marked the first time - ever - that Kiryu managed to recharge its limited use freeze ray and get a second shot.

Godzilla faced Kiryu again. Based on a suggestion by the author of the rules as to a possible stratagem for attackers, Godzilla went on an all-out attack against Kiryu, whilst causing as much collateral damage to the city as possible. The two monsters beat each other up to within a couple of wounds of defeat. 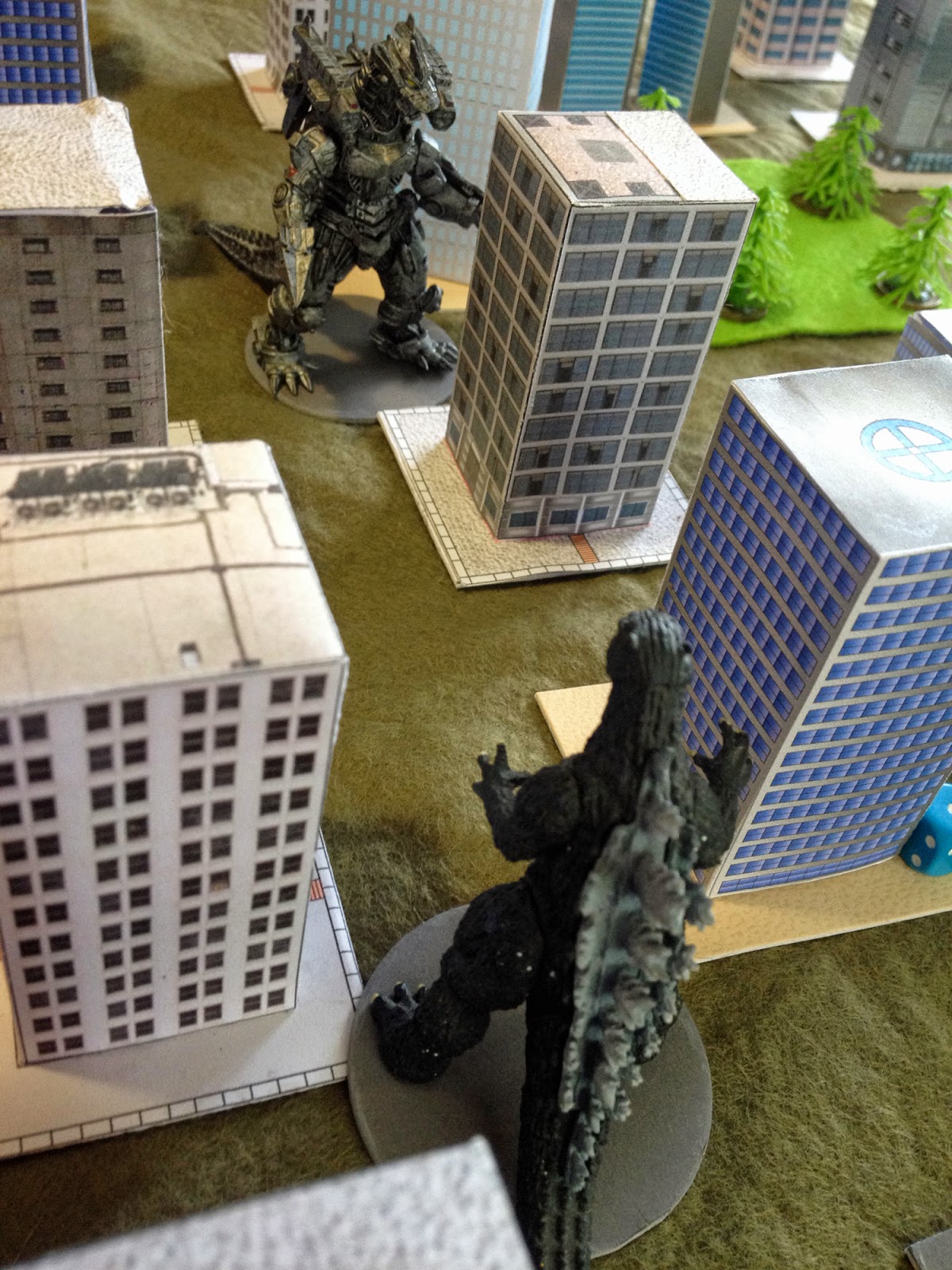 Meanwhile Gyaos destroyed property (or at least damaged it) whilst using his agility to evade Gamera. 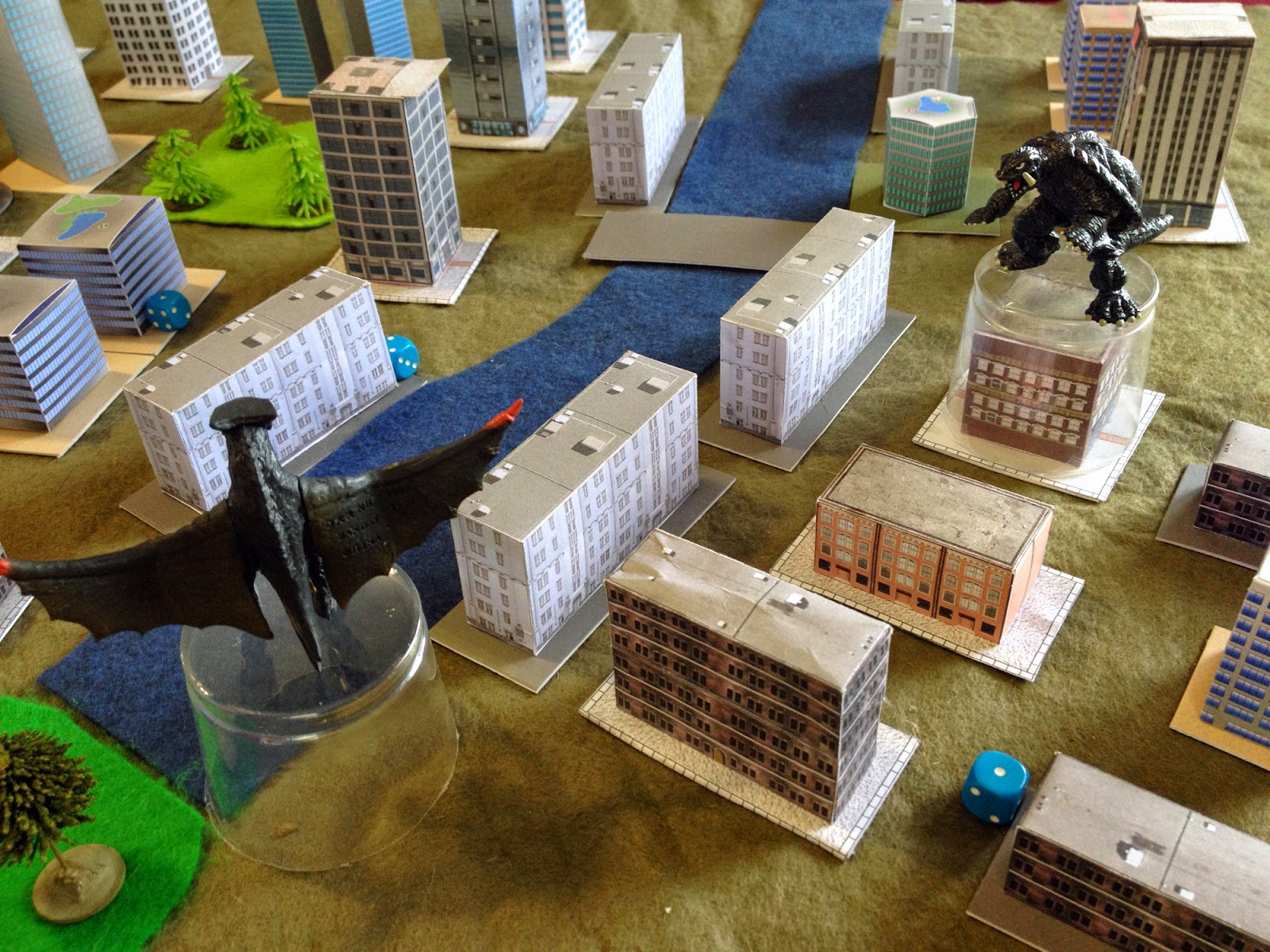 Kiryu almost took Godzilla down, but was defeated first. But Godzilla was totting up a good score, and Gyaos would be hard-pressed to keep pace. So Gyaos attacked Godzilla - if he could be knocked out, Gyaos could then concentrate on building his own score with only the easily evaded Gamera to worry about. 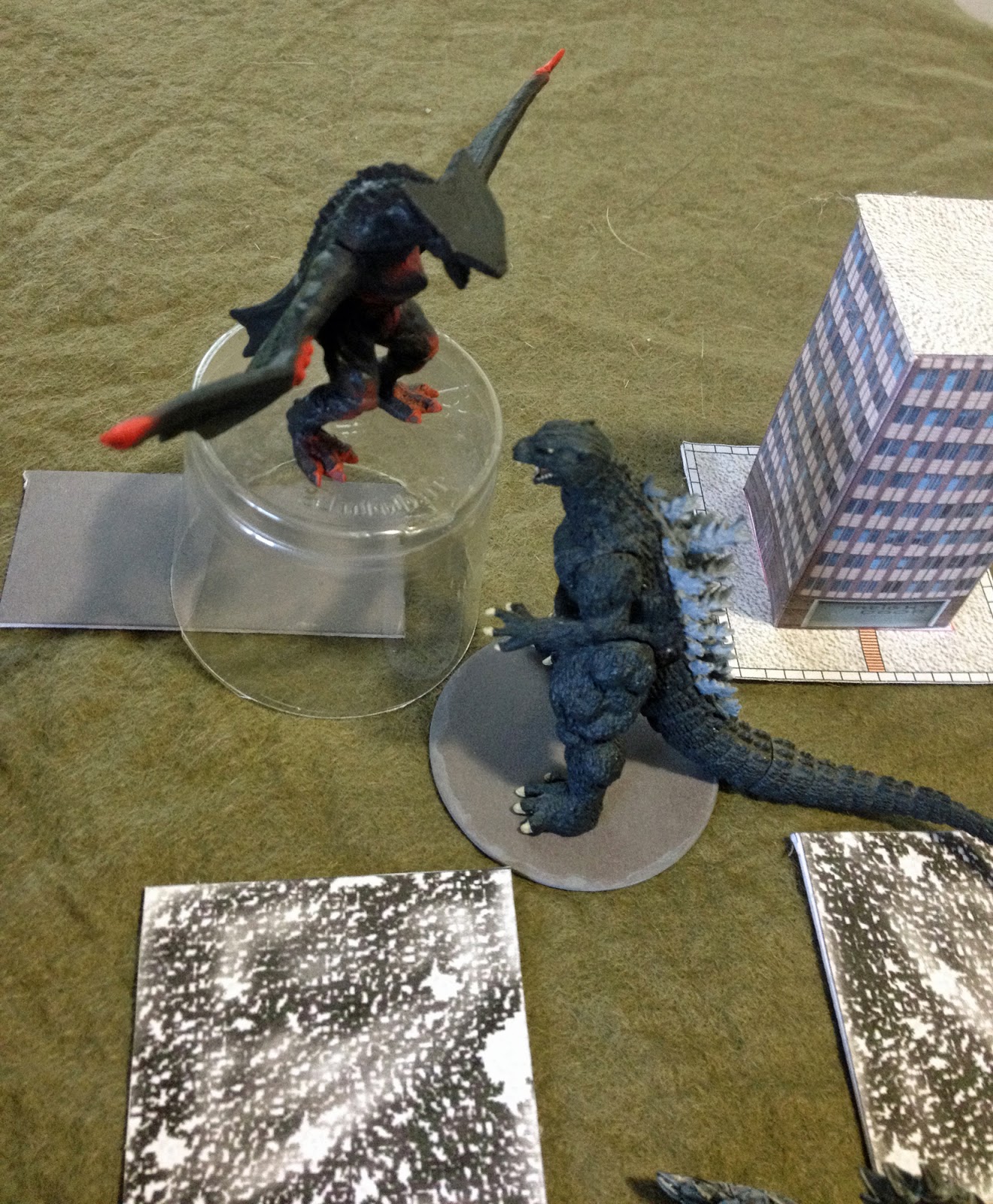 But, in fact, it was Gamera took down Godzilla. The King of the Monsters was on his last wound, and Gamera nipped in and ended his reign with a bolt of fire-breath. As a Neutral Defender, Gamera gets a bonus for scoring a KO on an attacker. 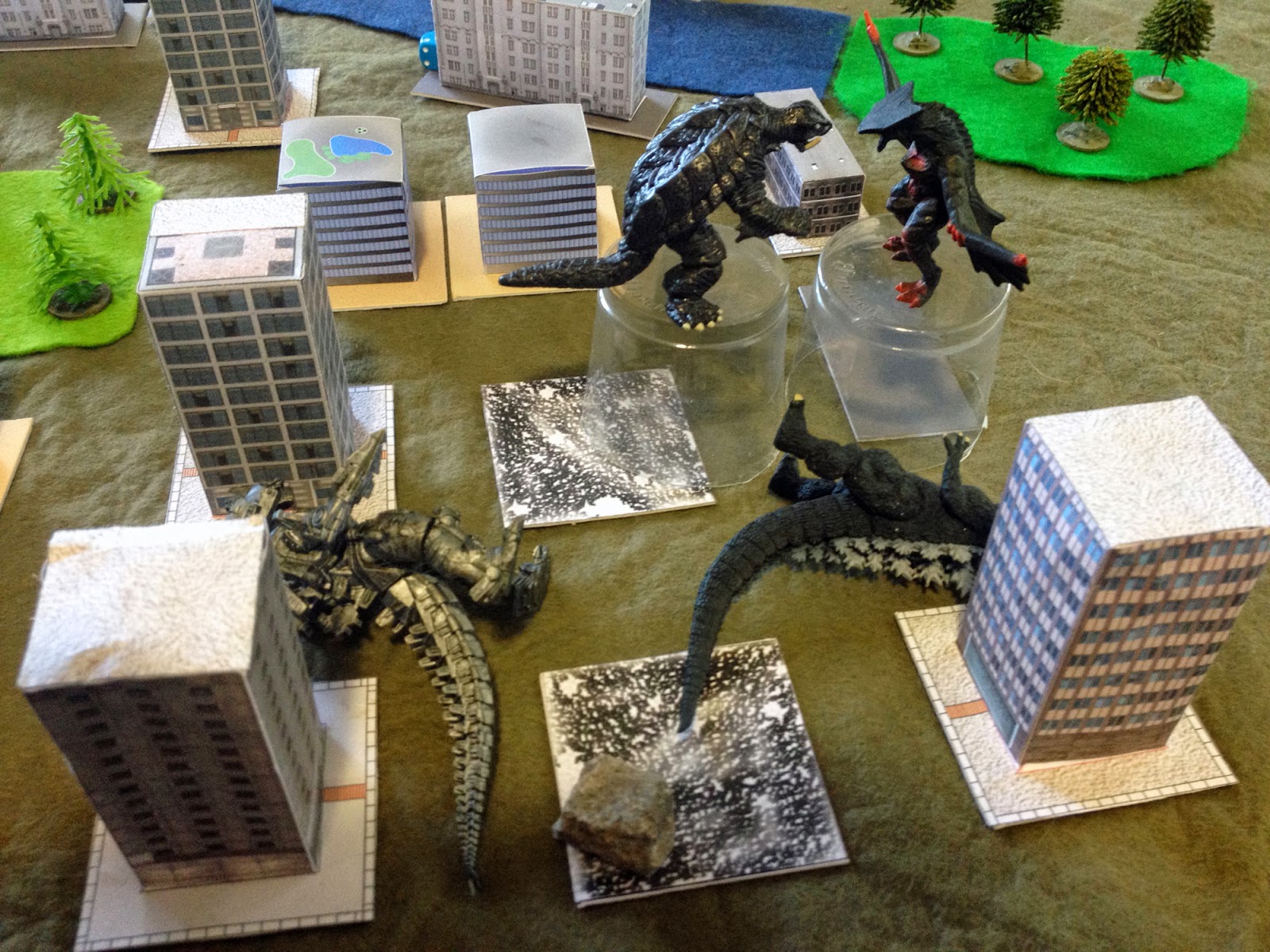 Gamera and Gyaos fought and chased each other ineffectually for the rest of the game, scoring a few points for wounds and buildings respectively. This pushed them slightly ahead of Godzilla. Had Kiryu scored the knockout blow it would have won, despite being the first monster to be defeated. Godzilla's score from destruction at that point was already considerable. As it was, Kiryu came last. 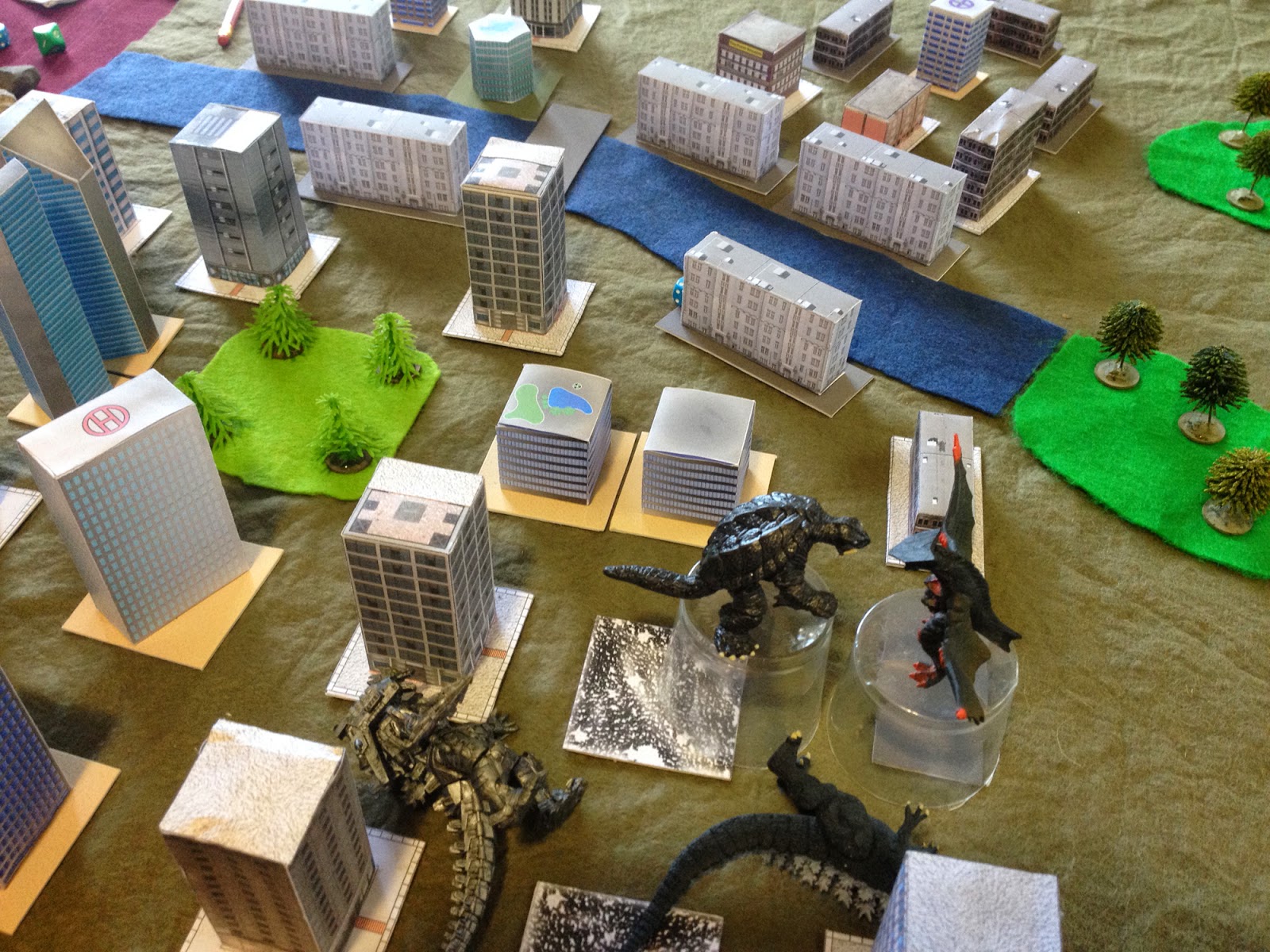 The system isn't perfect, but it does allow the monsters to adopt the 'correct' roles, whilst still forcing them to compete with each other. What I haven't tried yet is running pairs or teams of monsters, who add their scores together.
Posted by Kaptain Kobold at 00:22