The peace of a Saturday afternoon in the quiet city of Rymansville ... 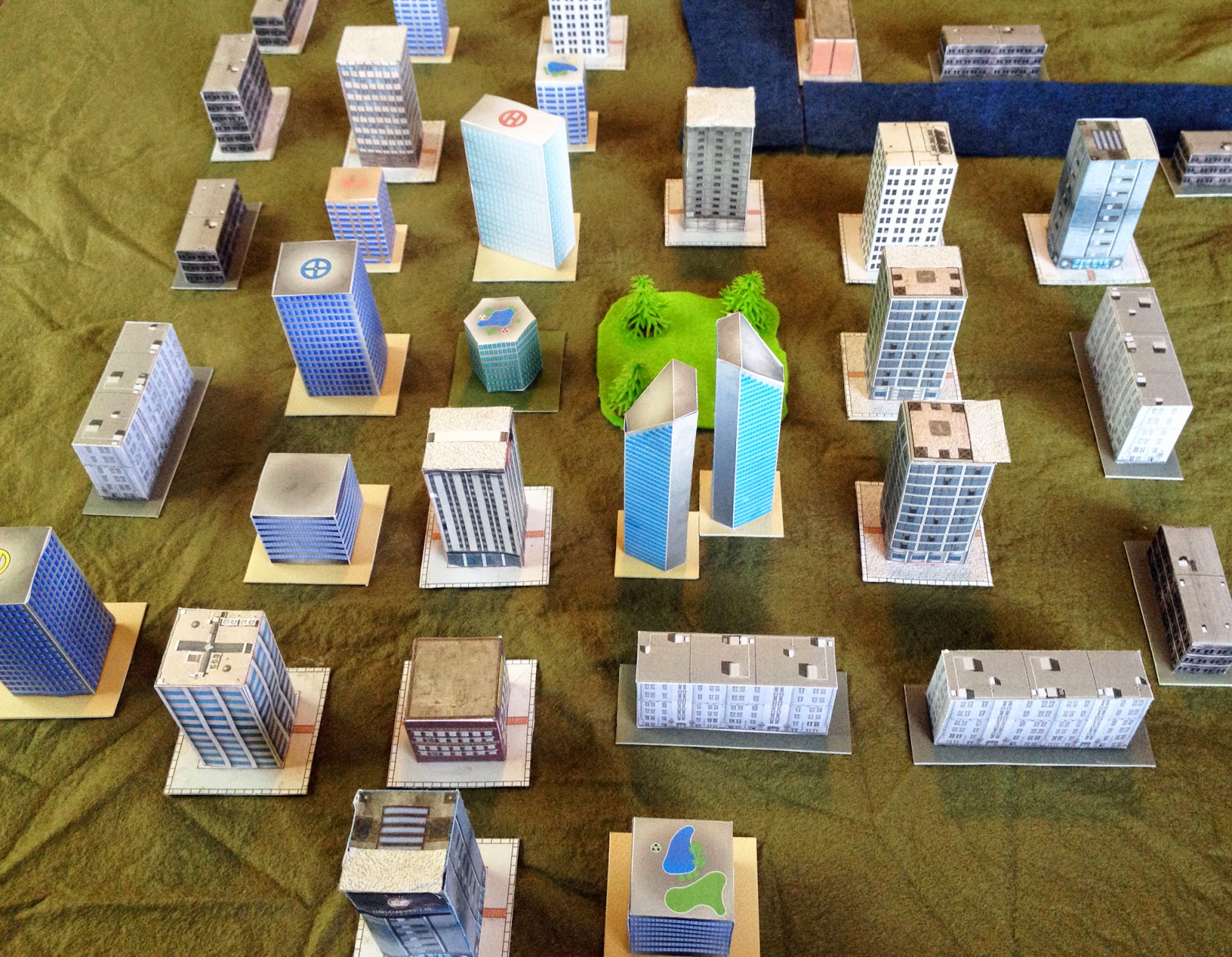 ... is shattered by the arrival of Godzilla! Oh no! 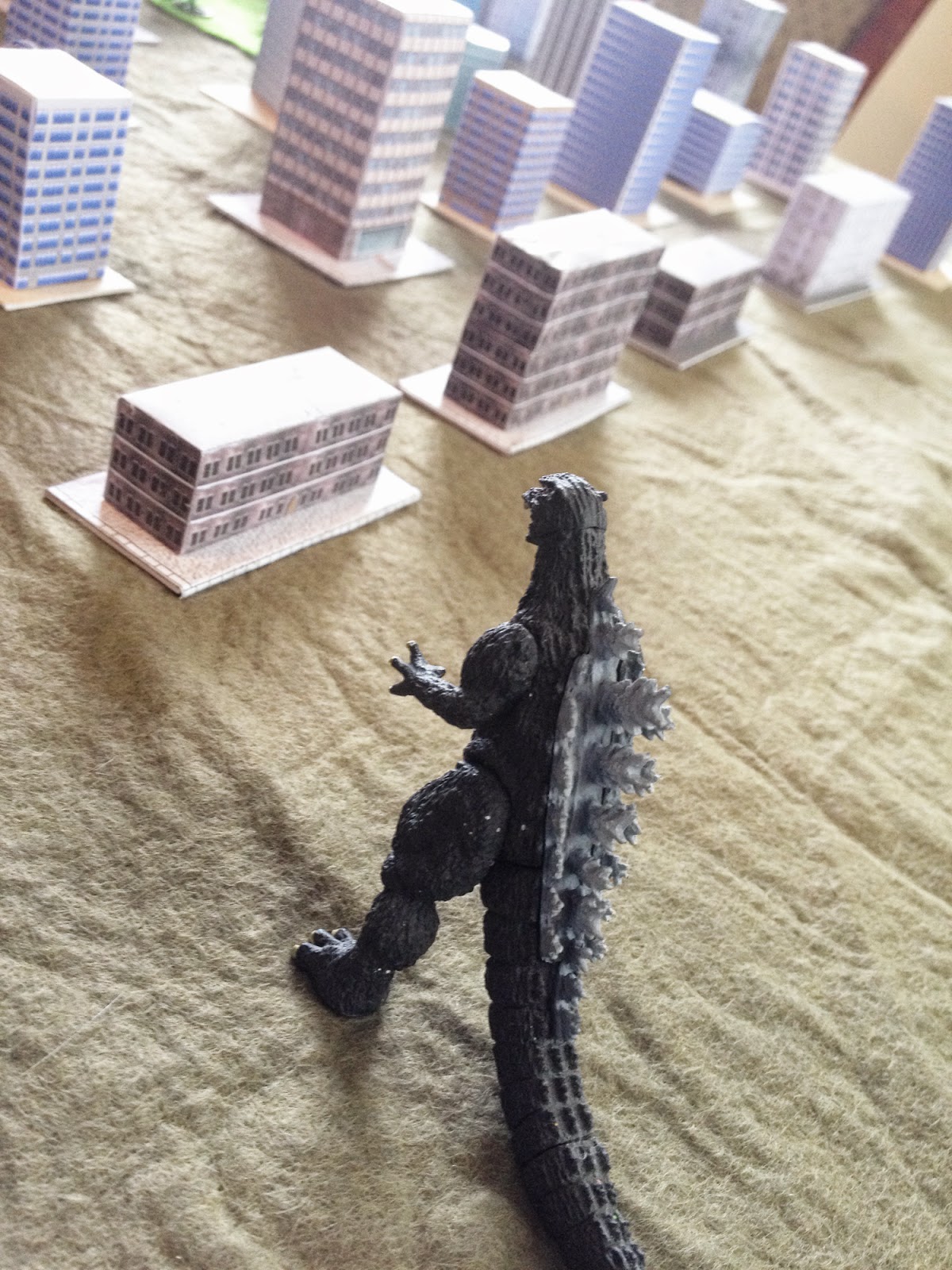 Fortunately the local council have borrowed Kiryu (Mechagodzilla) from the JSDF against just such an eventuality. 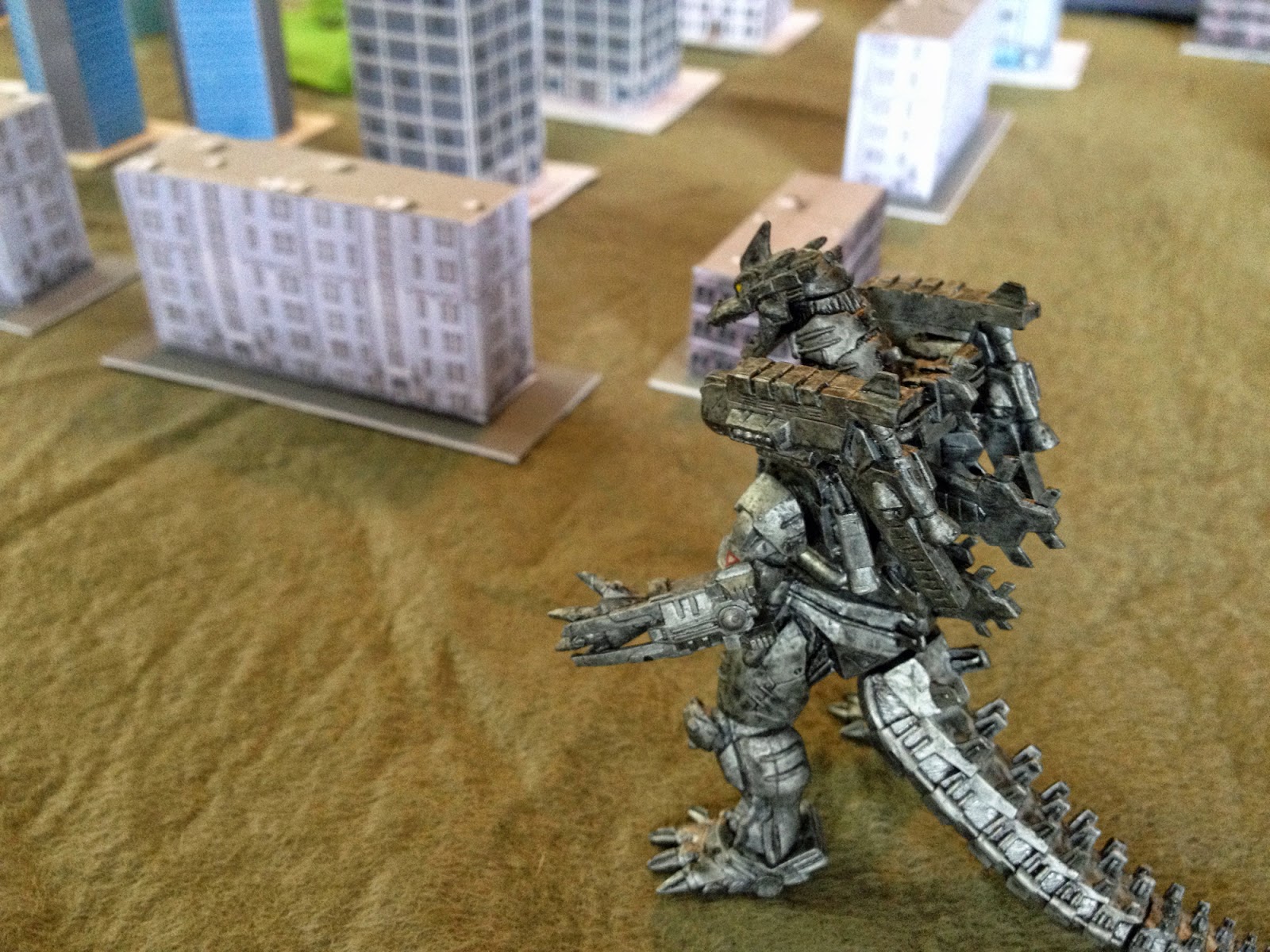 And so the stage is set for a quick game of Giant Monster Rampage, so I can remind myself how to play. There were no victory conditions as such - Godzilla had to wreak as much destruction as possible in ten turns, whereas Kiryu had to stop him.

The monsters started in opposite corners of the field. Kiryu got the initiative and used rocket boosters (Leap) to get across the city as fast as possible. 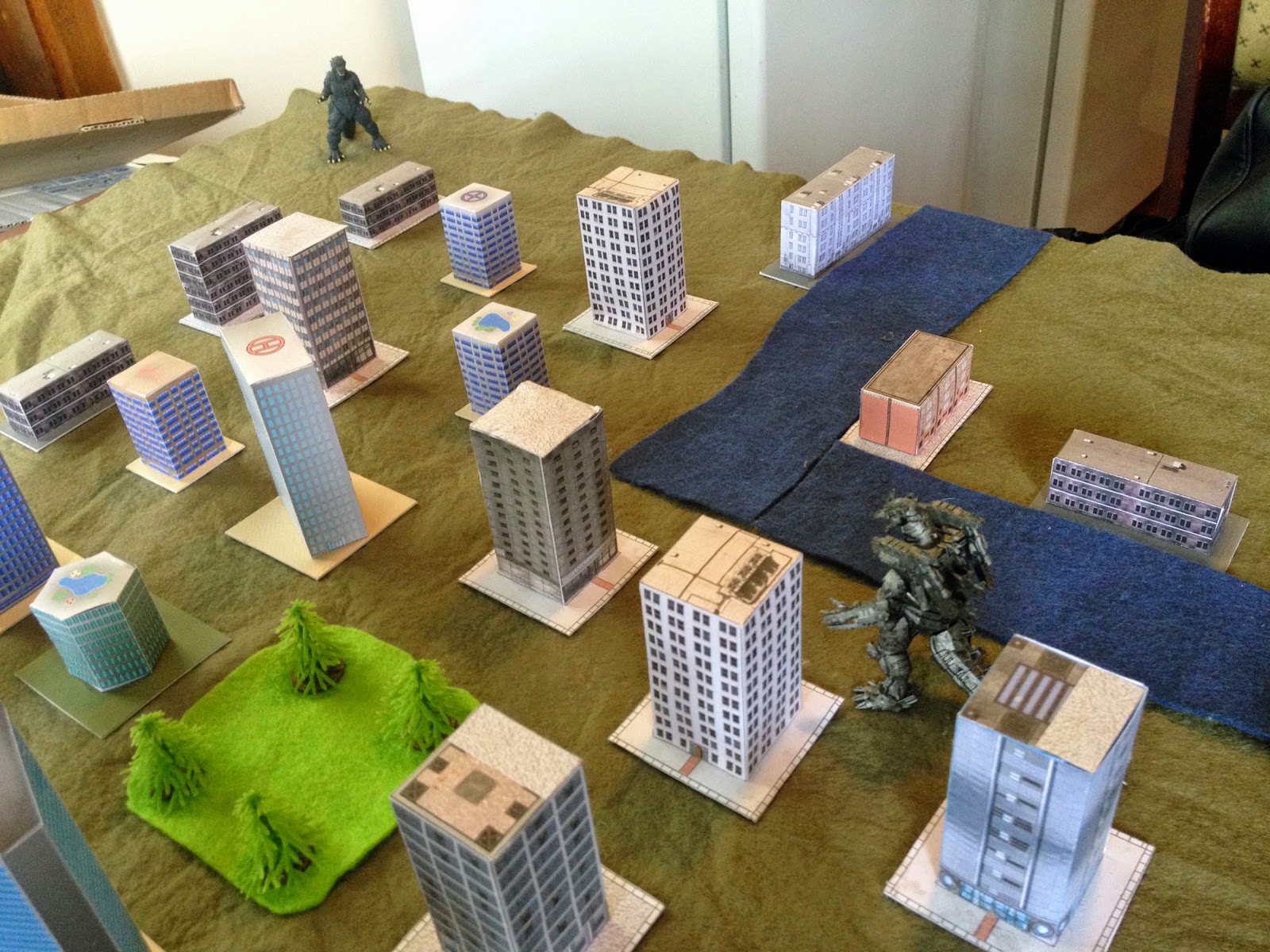 Godzilla moved in on some apartment buildings. 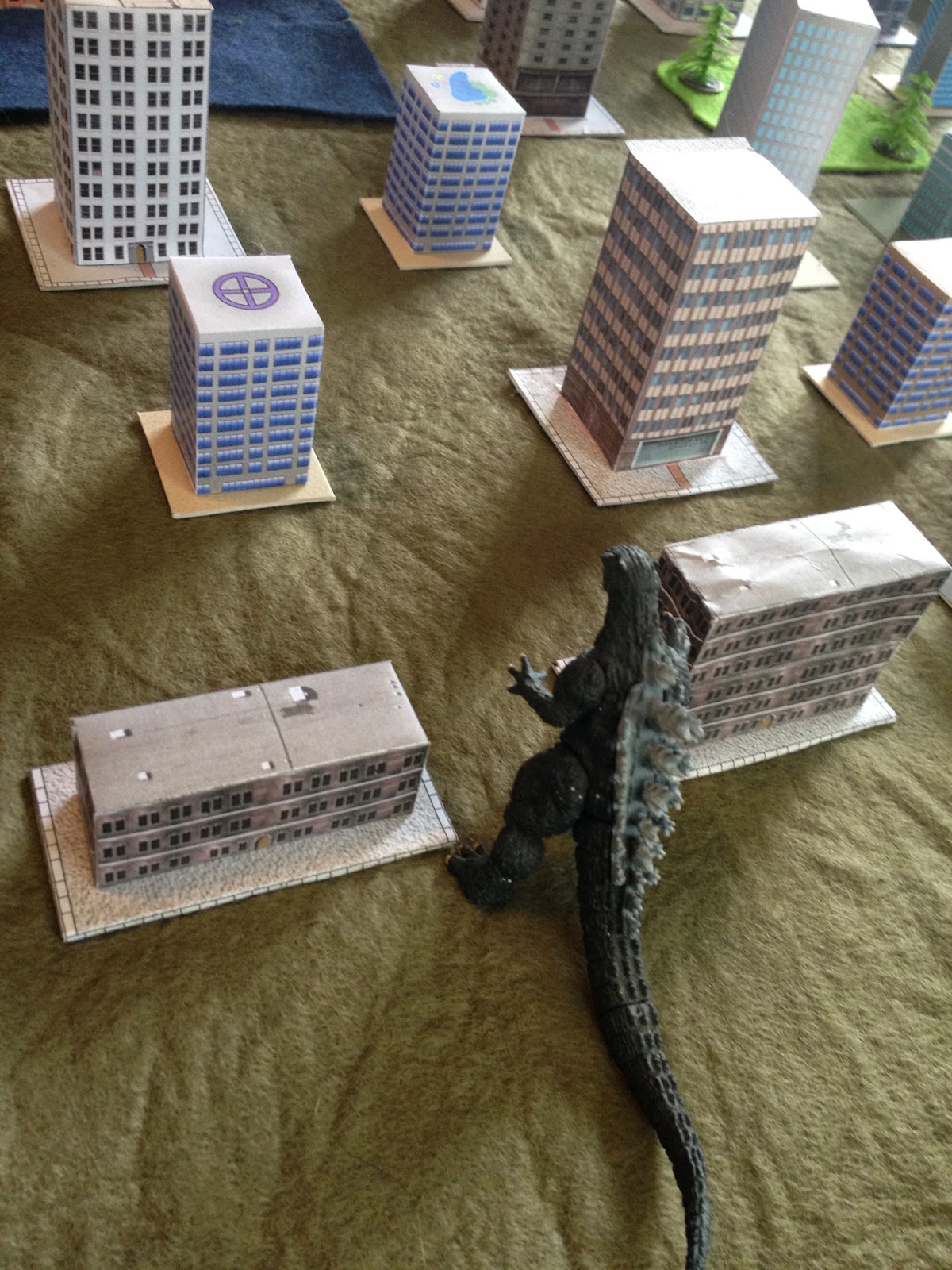 And the destruction commenced. The card represents an area of rubble, whilst the rock represents a chunk big enough to be used as a weapon. 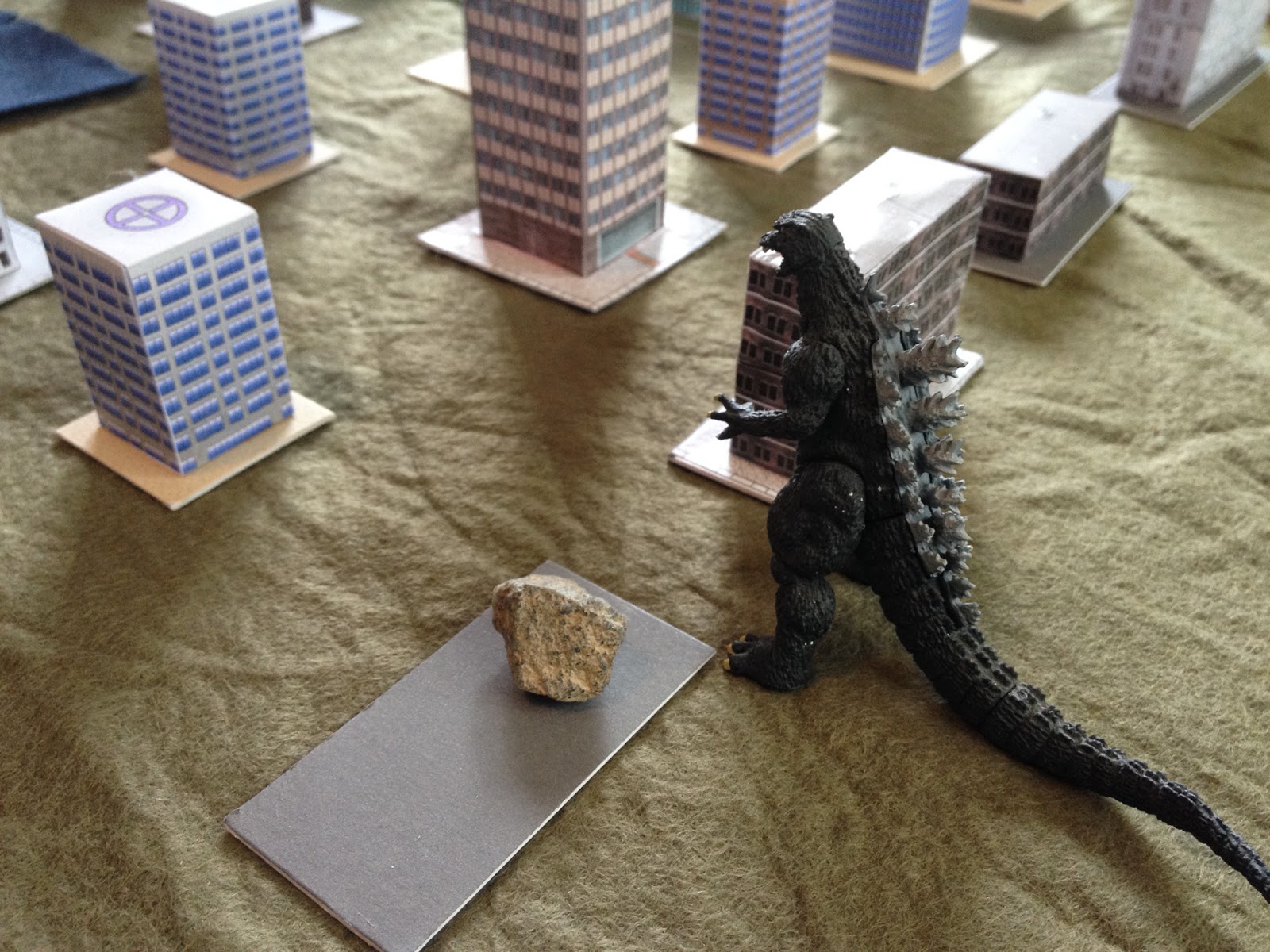 On the next turn Kiryu moved into position, unleashing lasers and rockets at Godzilla but with little effect. Kiryu has awesome firepower, but a lot of it has limited charges which are difficult to restore. 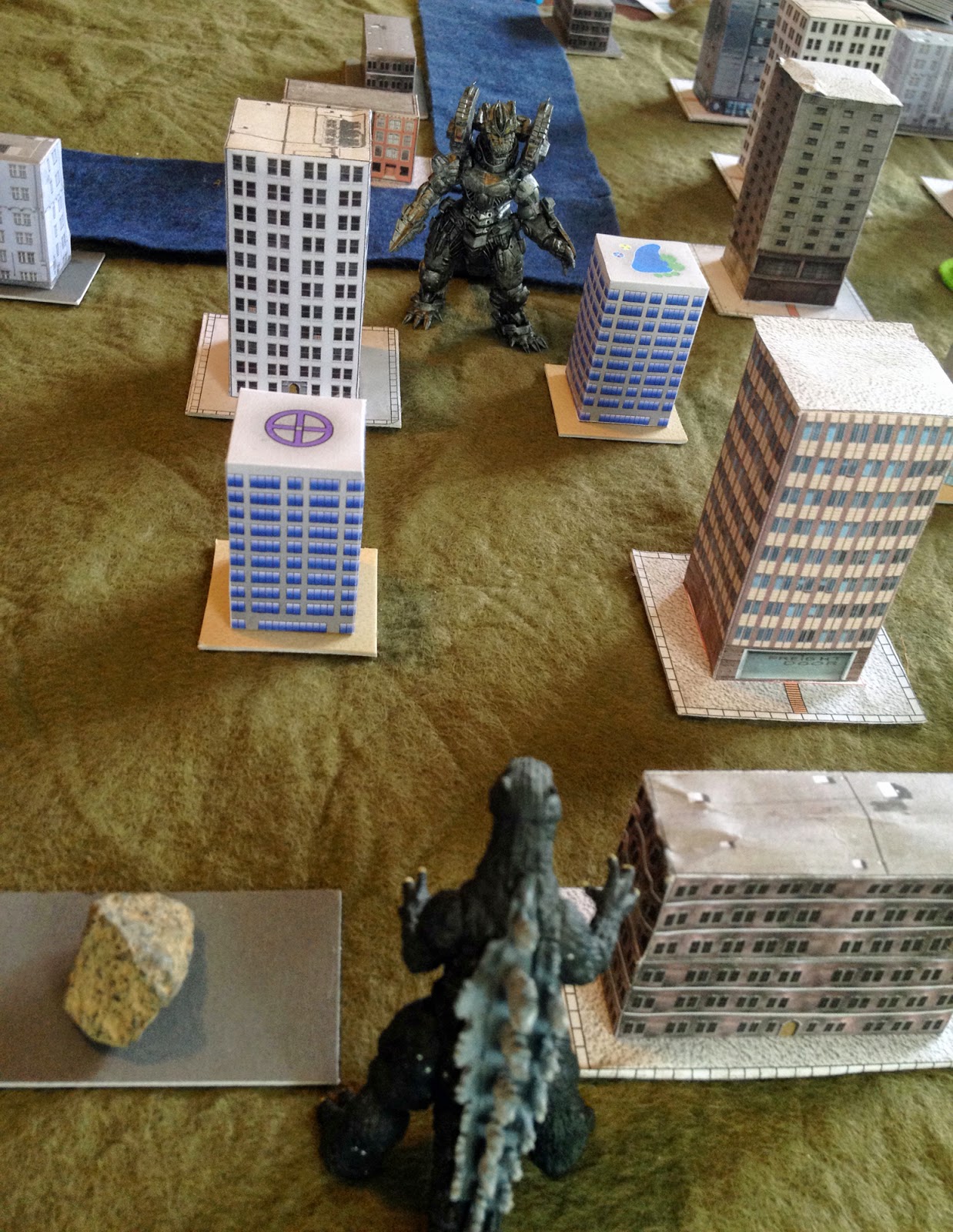 The rockets were enough to knock Godzilla down though. 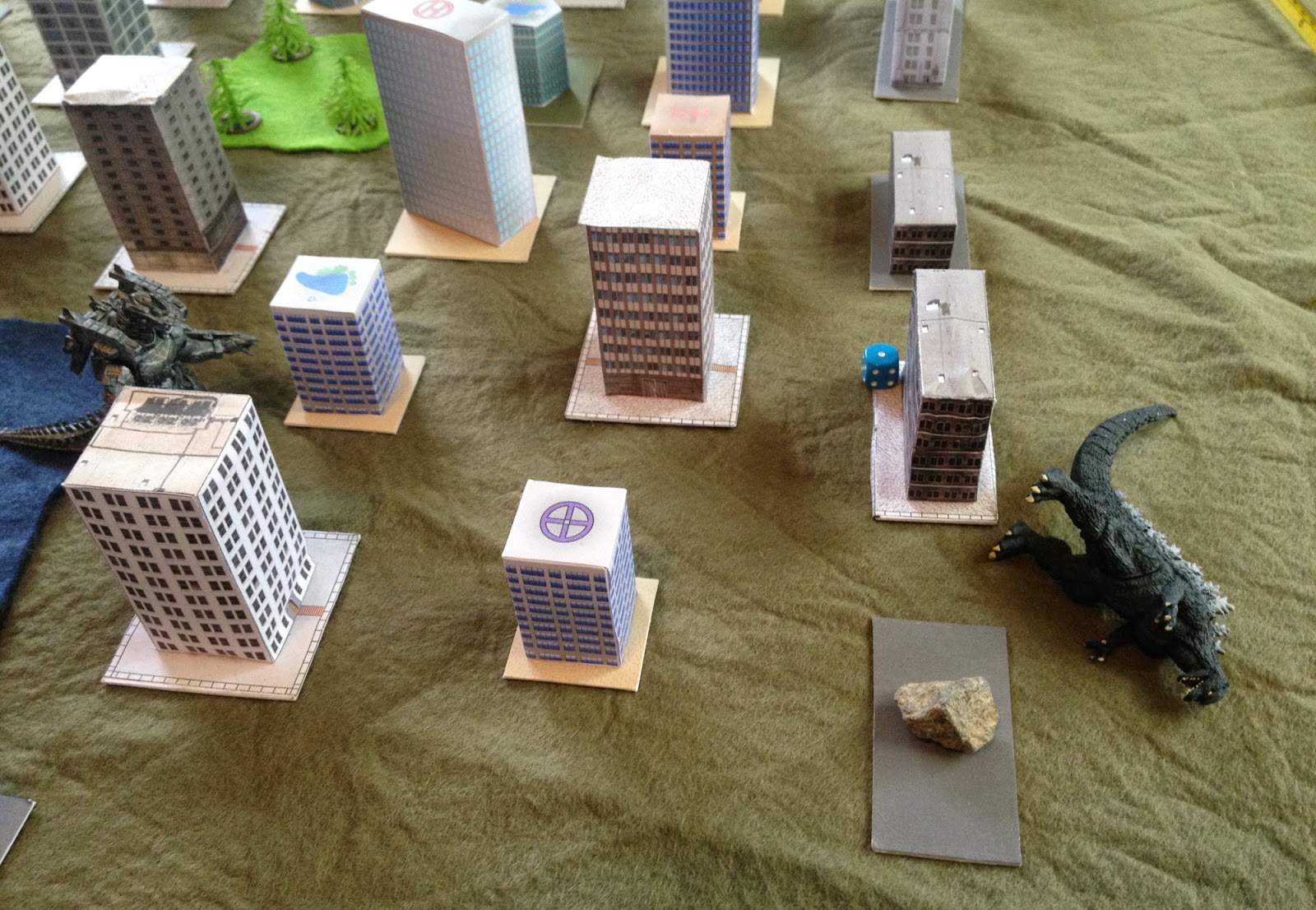 Standing up consumes a lot of movement, so Godzilla was kept from moving to the larger, higher value, buildings. He used his claws and bite to destroy another apartment, then threw the rubble at Kiryu. 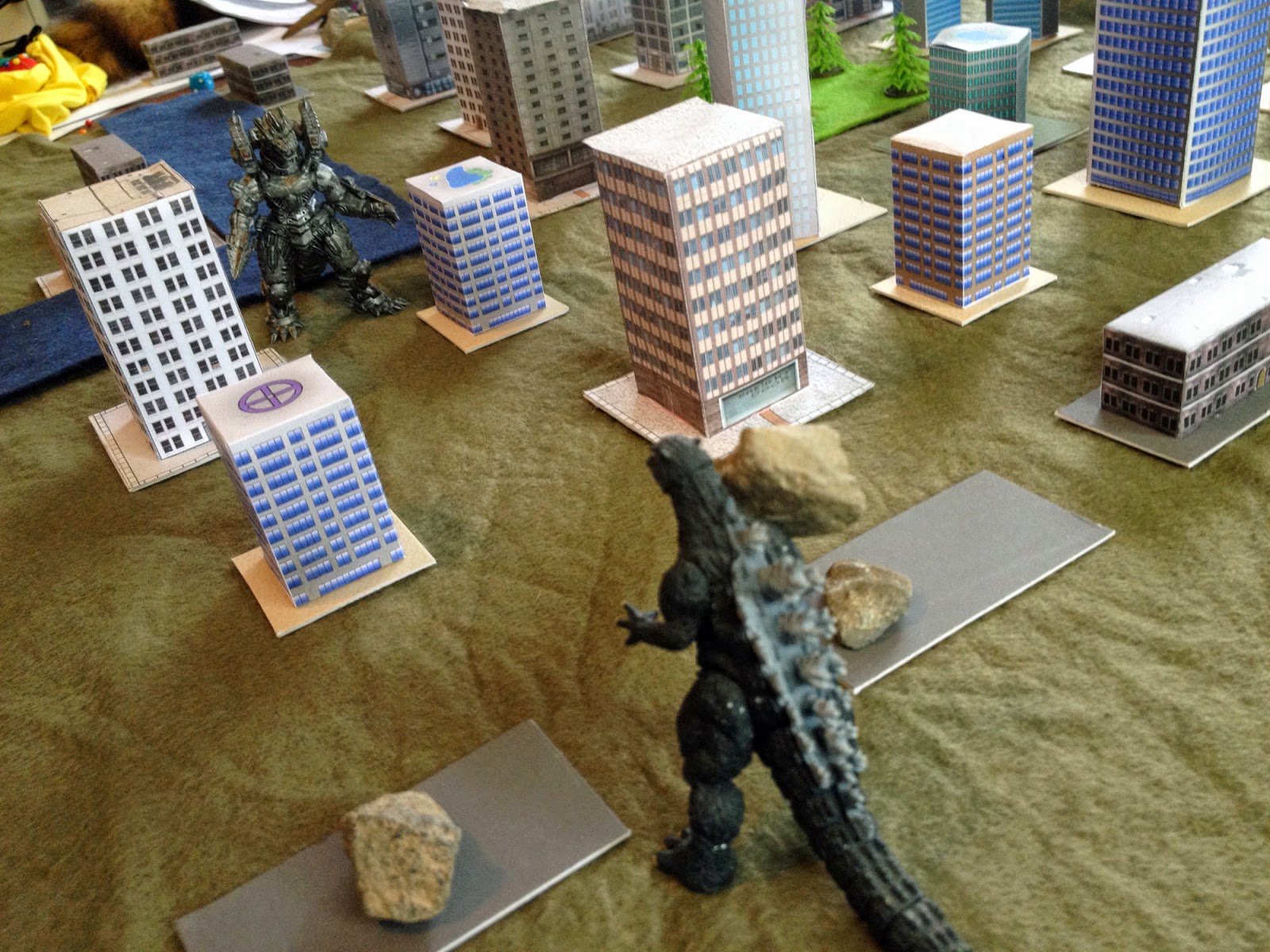 It missed, but his atomic breath didn't, and Kiryu took damage. 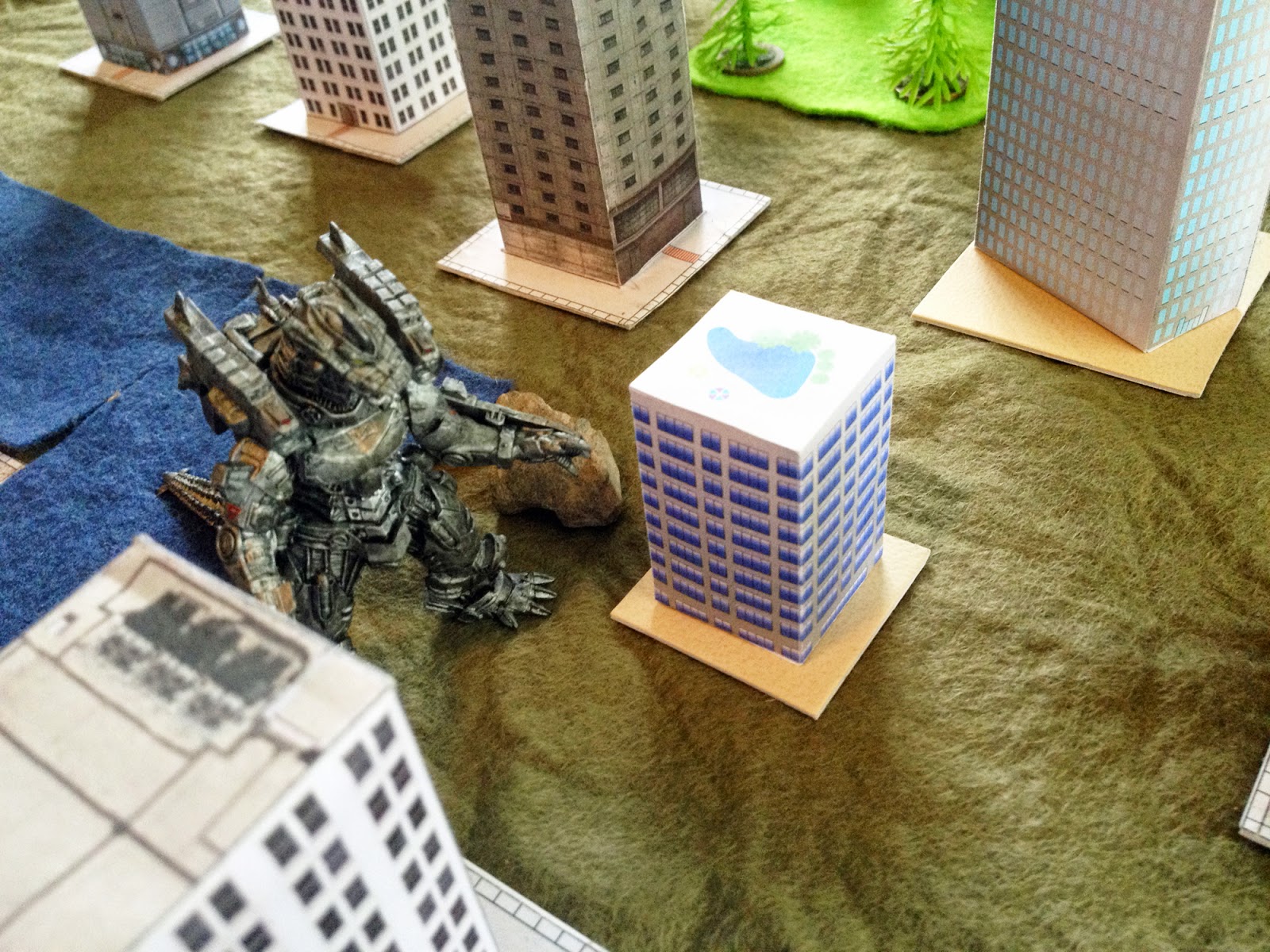 Taking the initiative Godzilla moved to put a large skyscraper between him and Kiryu. 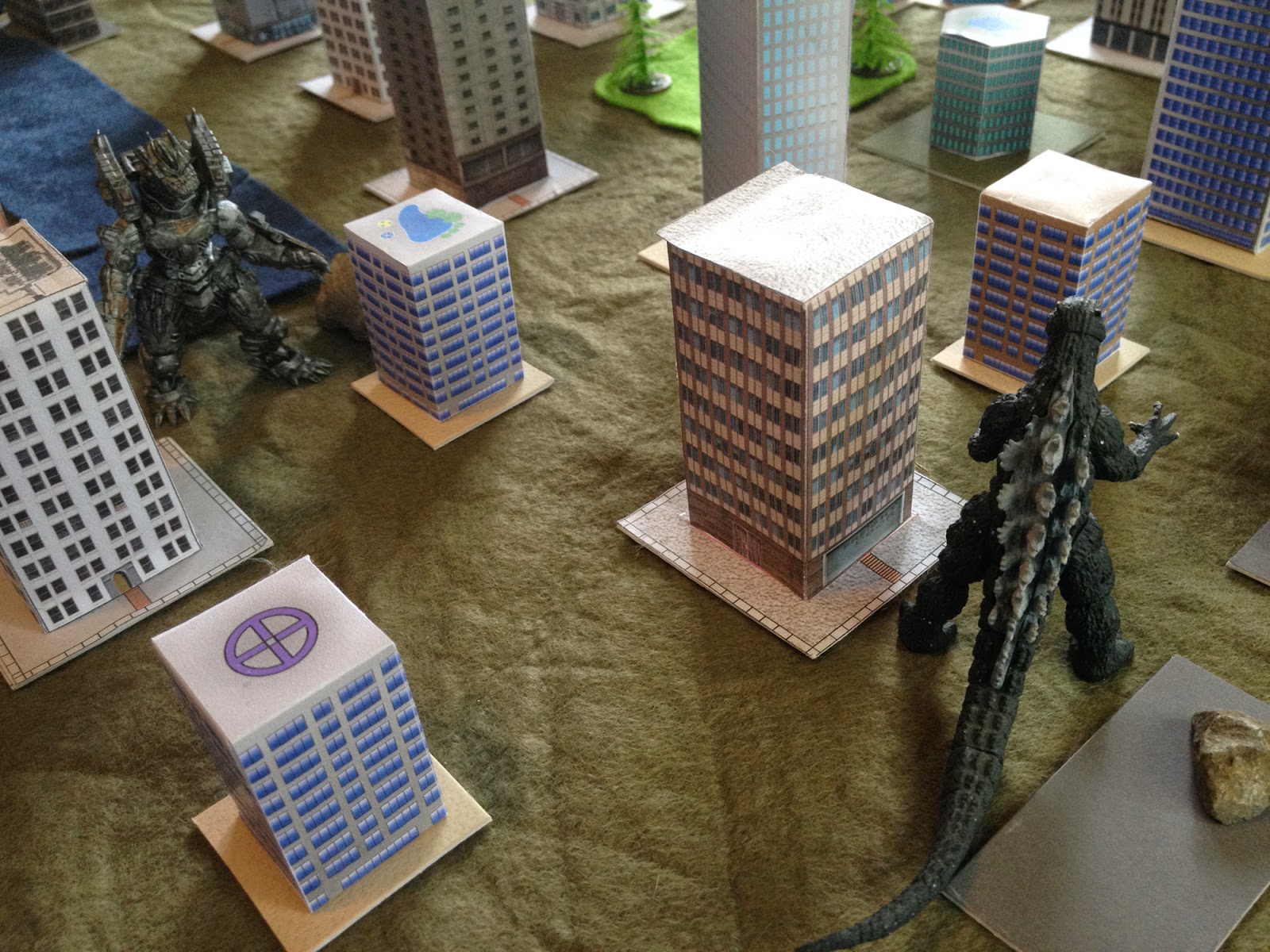 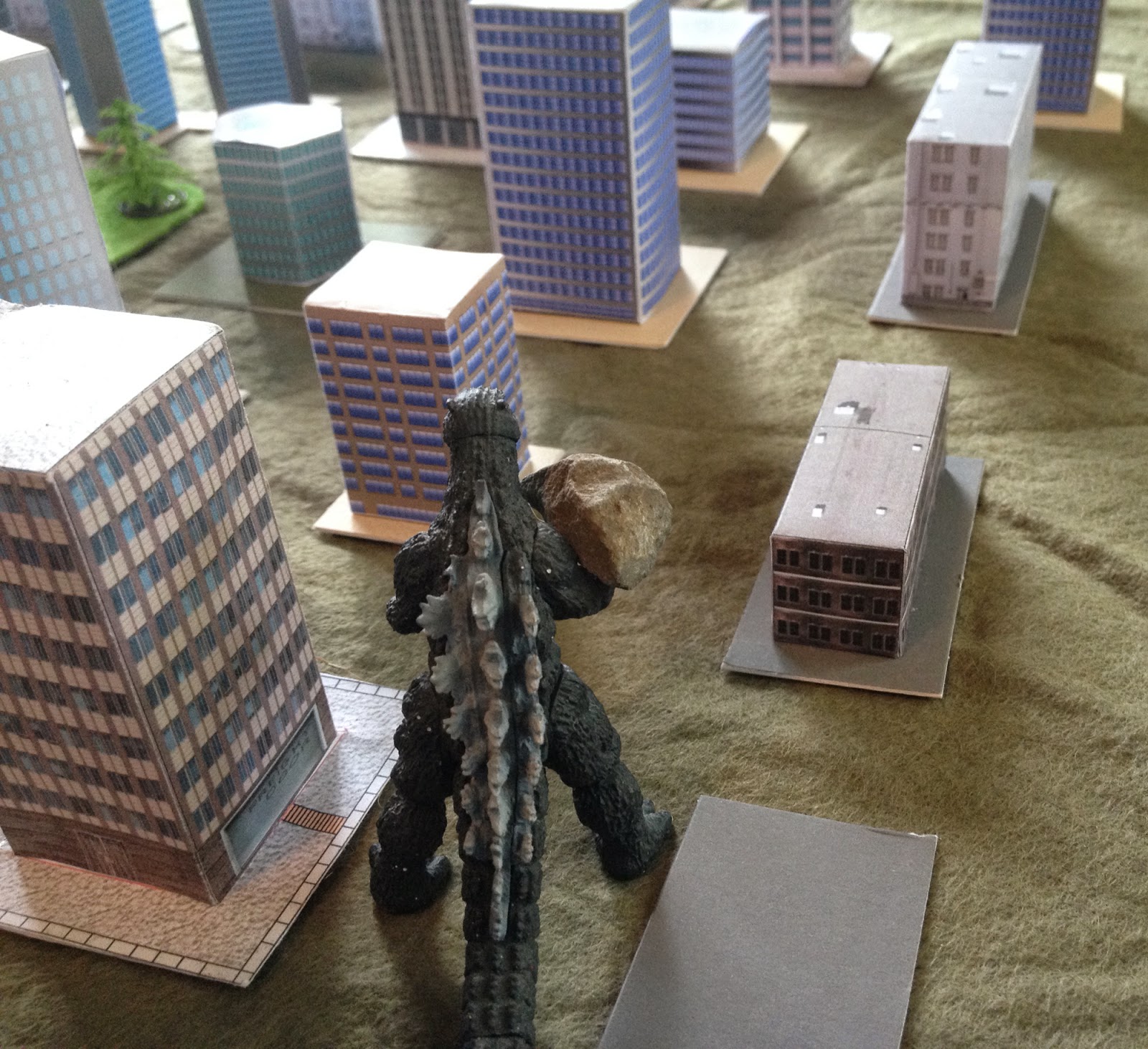 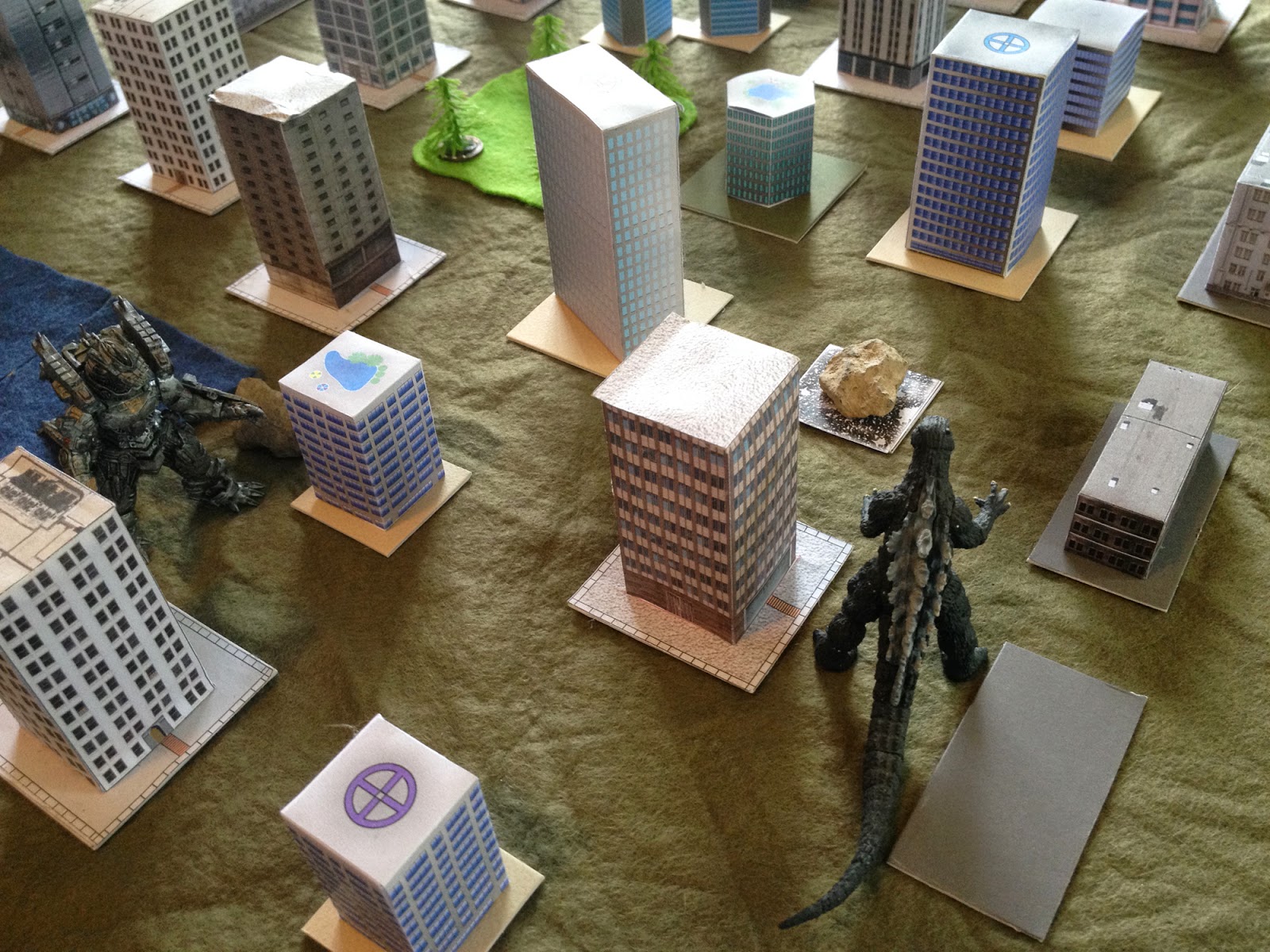 Kiryu rocket-boosted in front of Godzilla and attacked with his drill and electrically charged hand-spikes. The latter have the ability to prevent retaliatory close combat attacks but that failed. 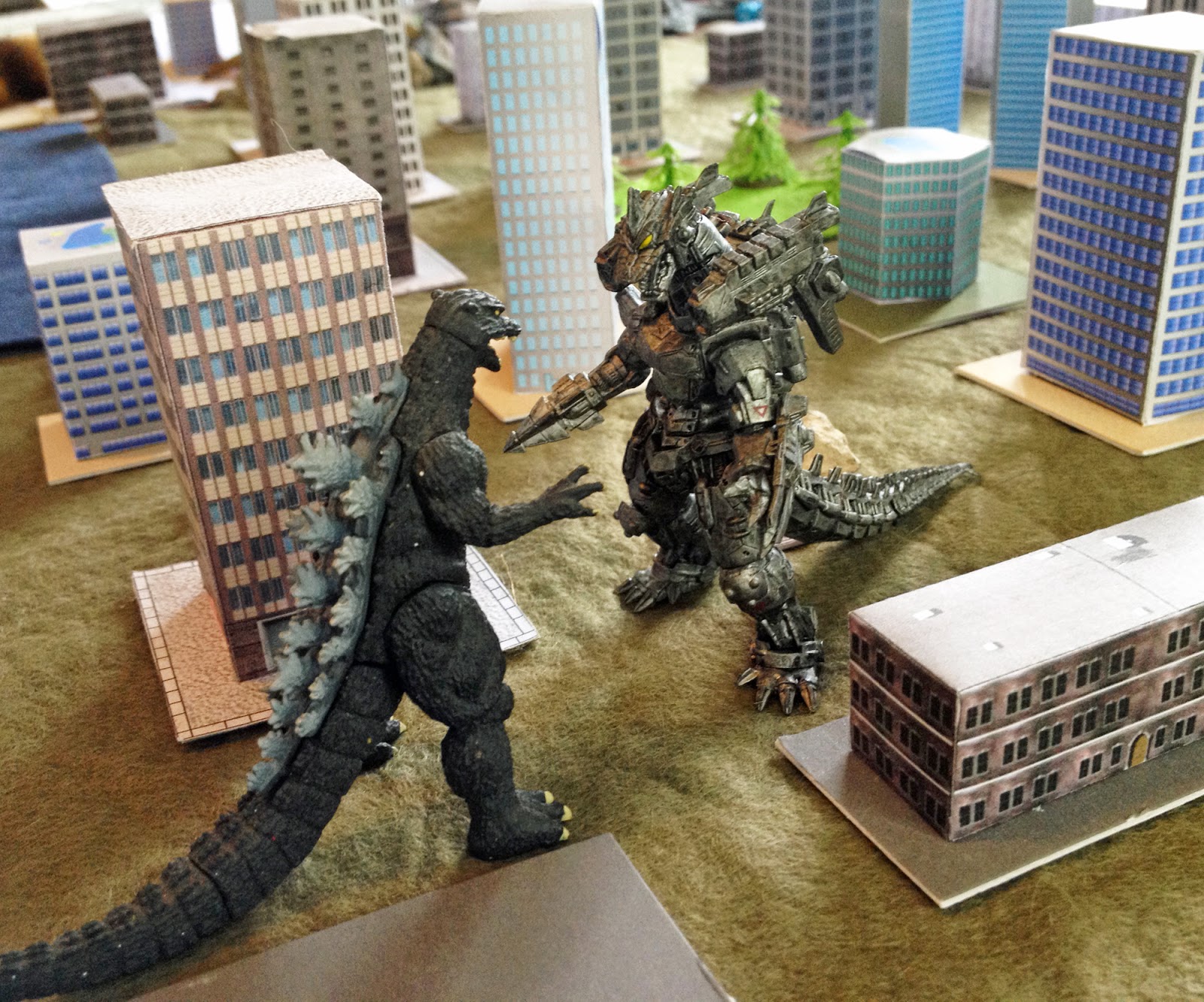 Godzilla's retaliation was swift and effective and Kiryu took as much damage as it had inflicted. A final tail-swipe knocked him back. 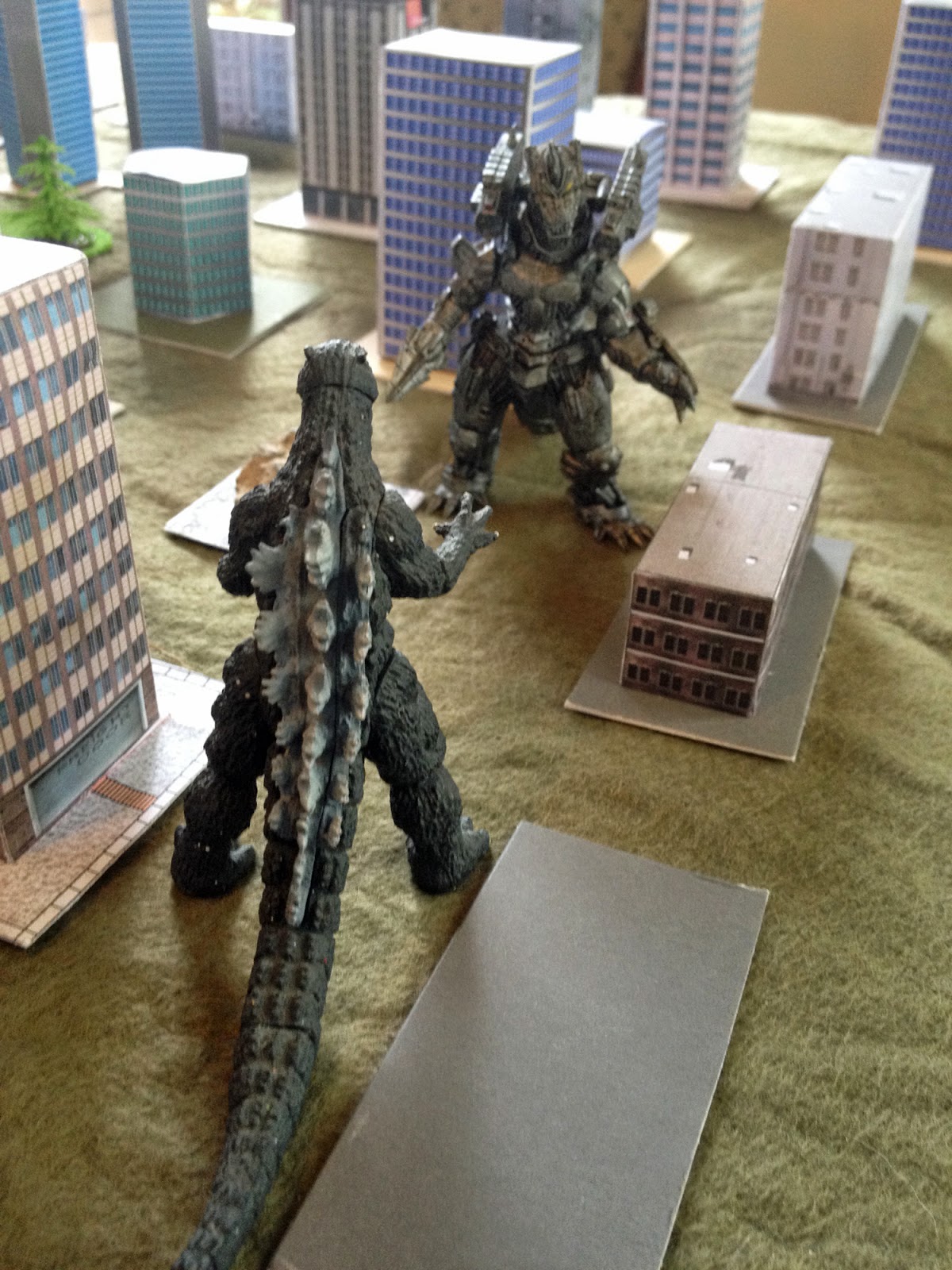 But Kiryu still had a chance to fire and the power to do it. Godzilla took lasers and rockets again, and lost plenty of wounds. Now was Kiryu's chance to use its one-shot freeze-ray and maybe finish Godzilla off. 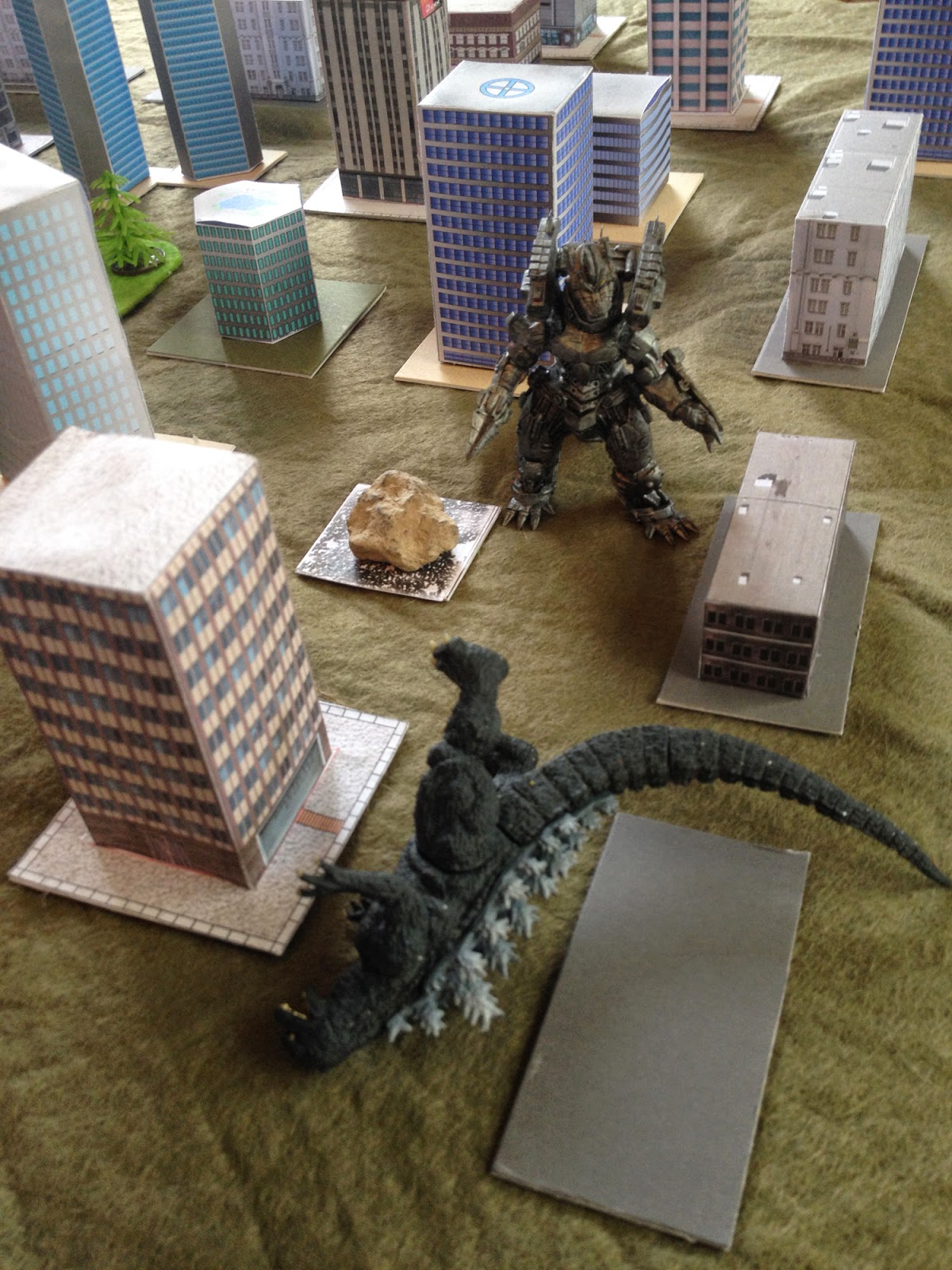 Godzilla got up and tore chunks out of Kiryu with his mighty jaws ... 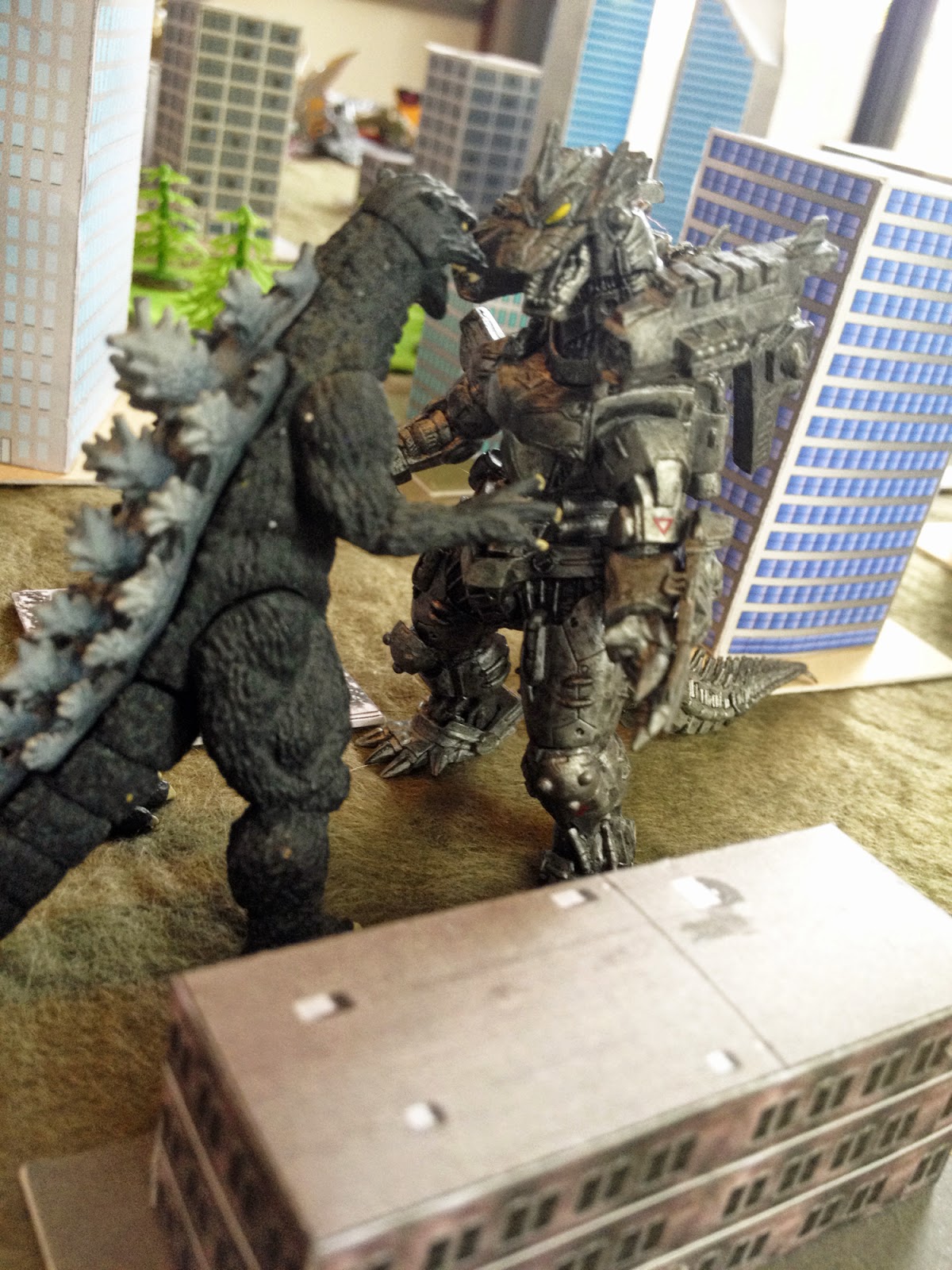 ... before attempting to hurl the mechanical monster into a nearby sky-scraper. That failed though. 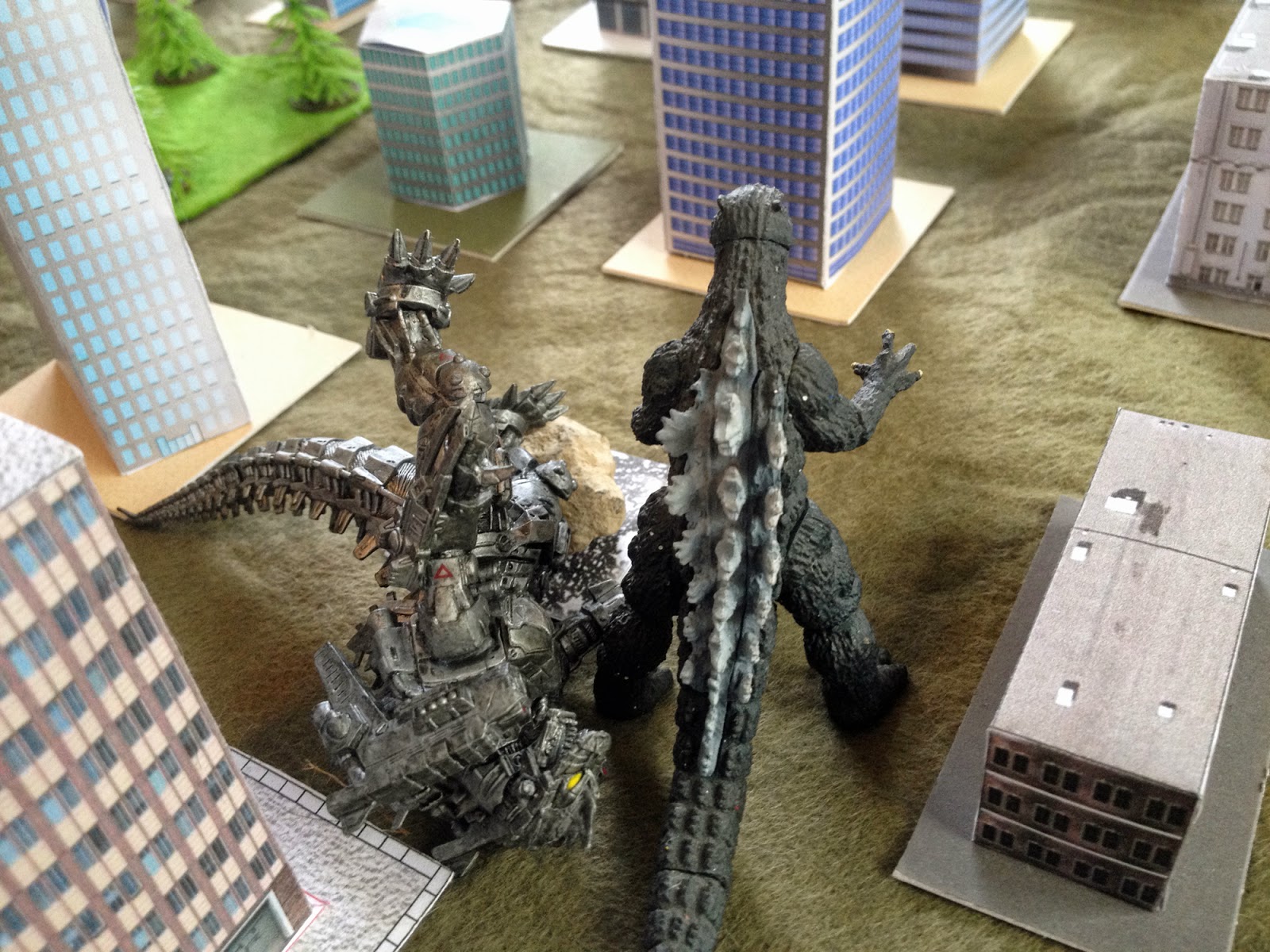 Kiryu was now badly damaged and retreated in an attempt to recover wounds and possibly weapon charges. Godzilla was wounded, and a few decent hits was all it would take to bring him down. But it had to be done quickly as his regeneration ability would allow him to recover damage at a decent rate. 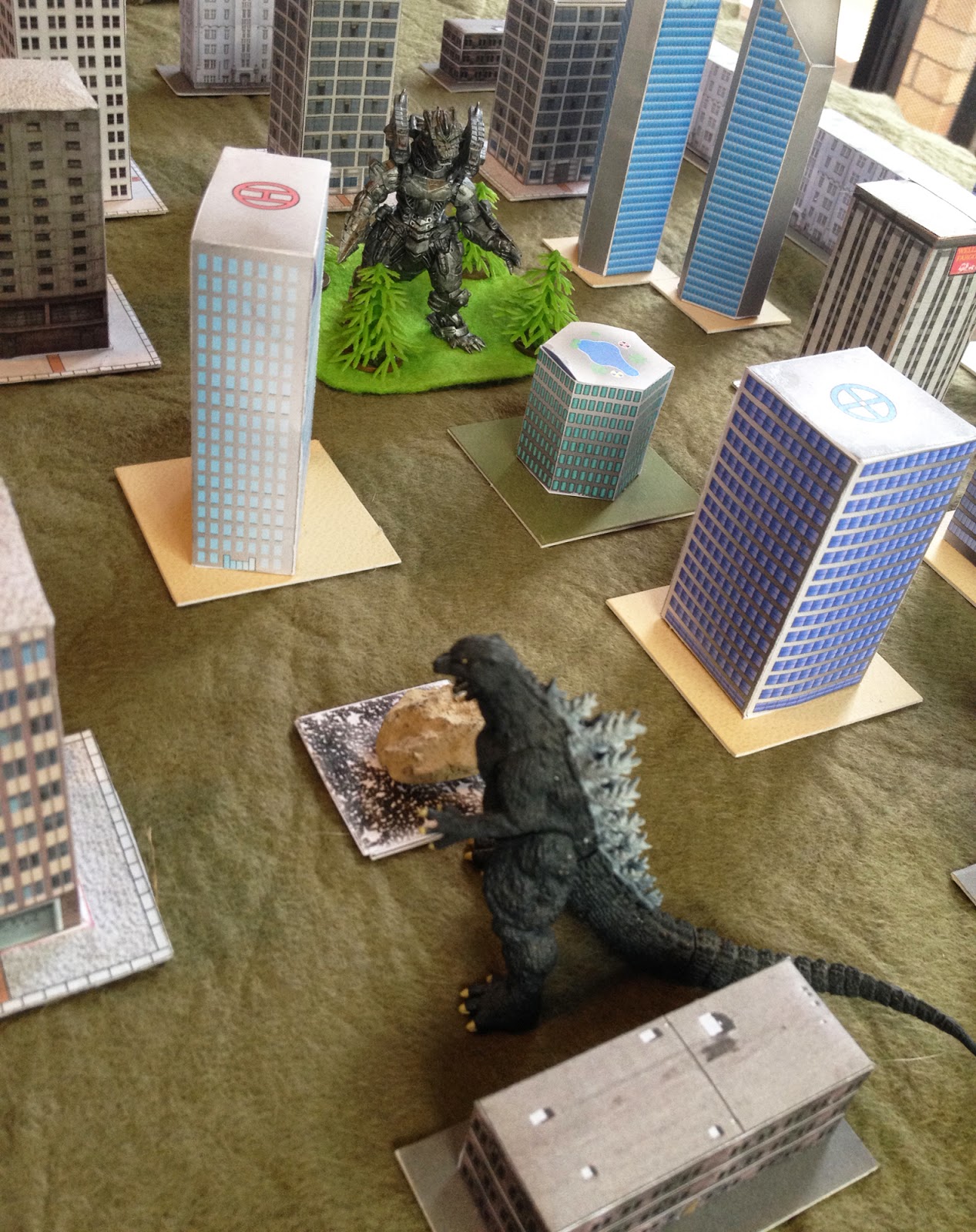 Kiryu reserved the power it could have used for the laser to try and regenerate weapon charges, so was forced to hurling a large tree at Godzilla. It missed. 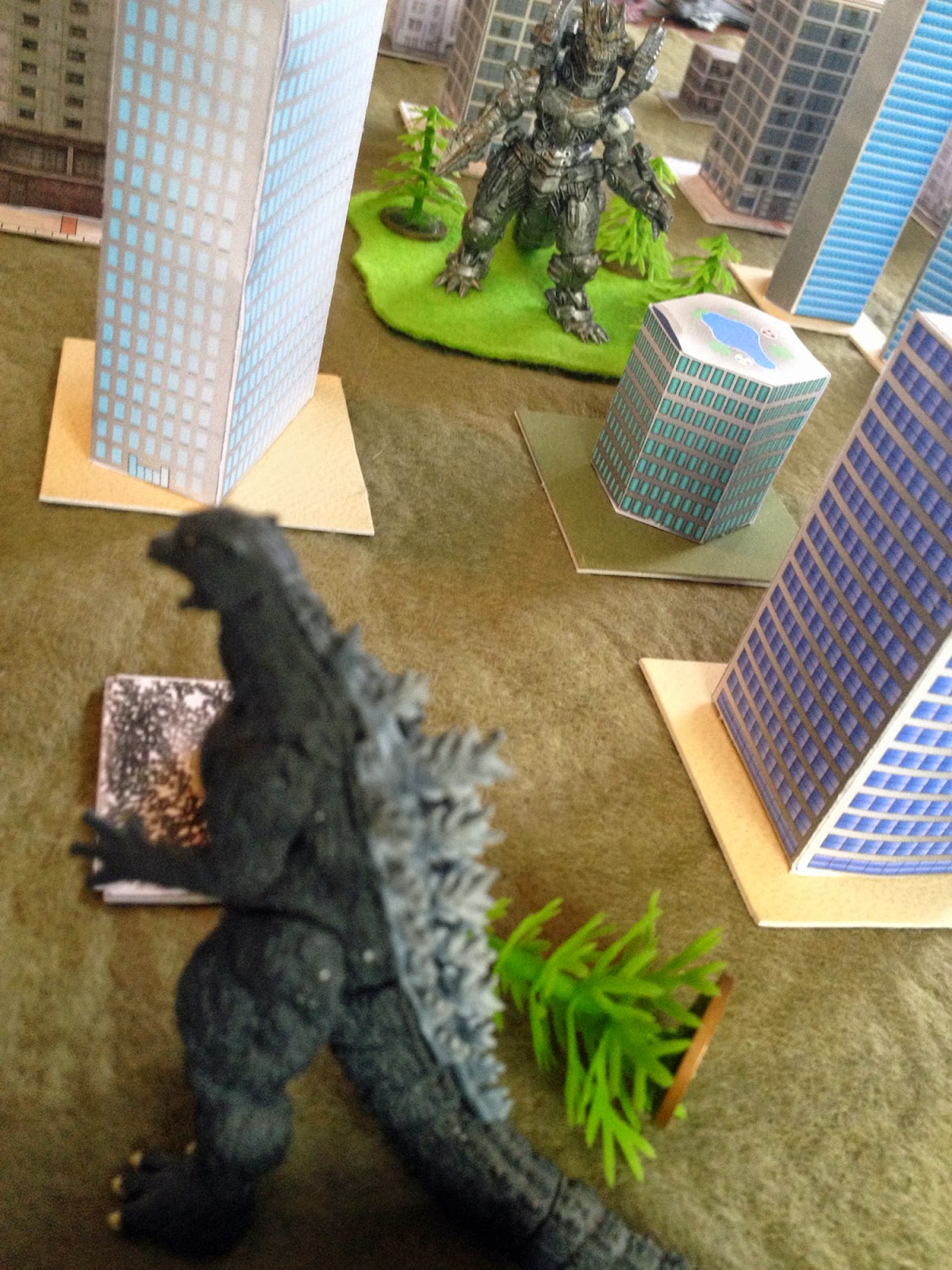 Unfortunately no weapons charges were recovered. With the initiative Kiryu was forced to resort to desperate tactics - a rocket-assisted leap right on top of Godzilla. 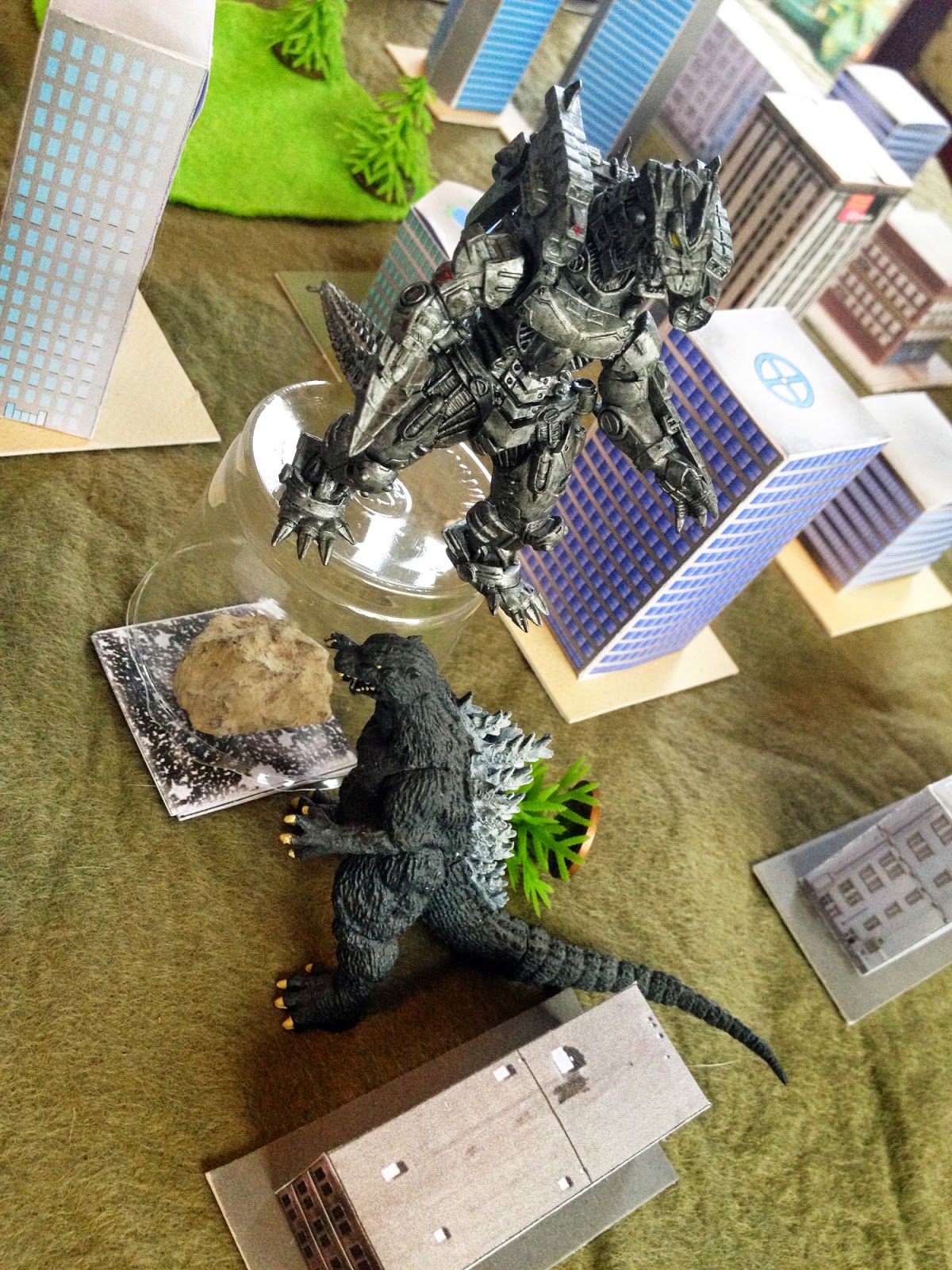 Godzilla dodged it, but fell doing so, taking more damage as he collided with a nearby building. Kiryu followed up with some hurled rubble, but Godzilla's massive frame absorbed that particular puny attack. 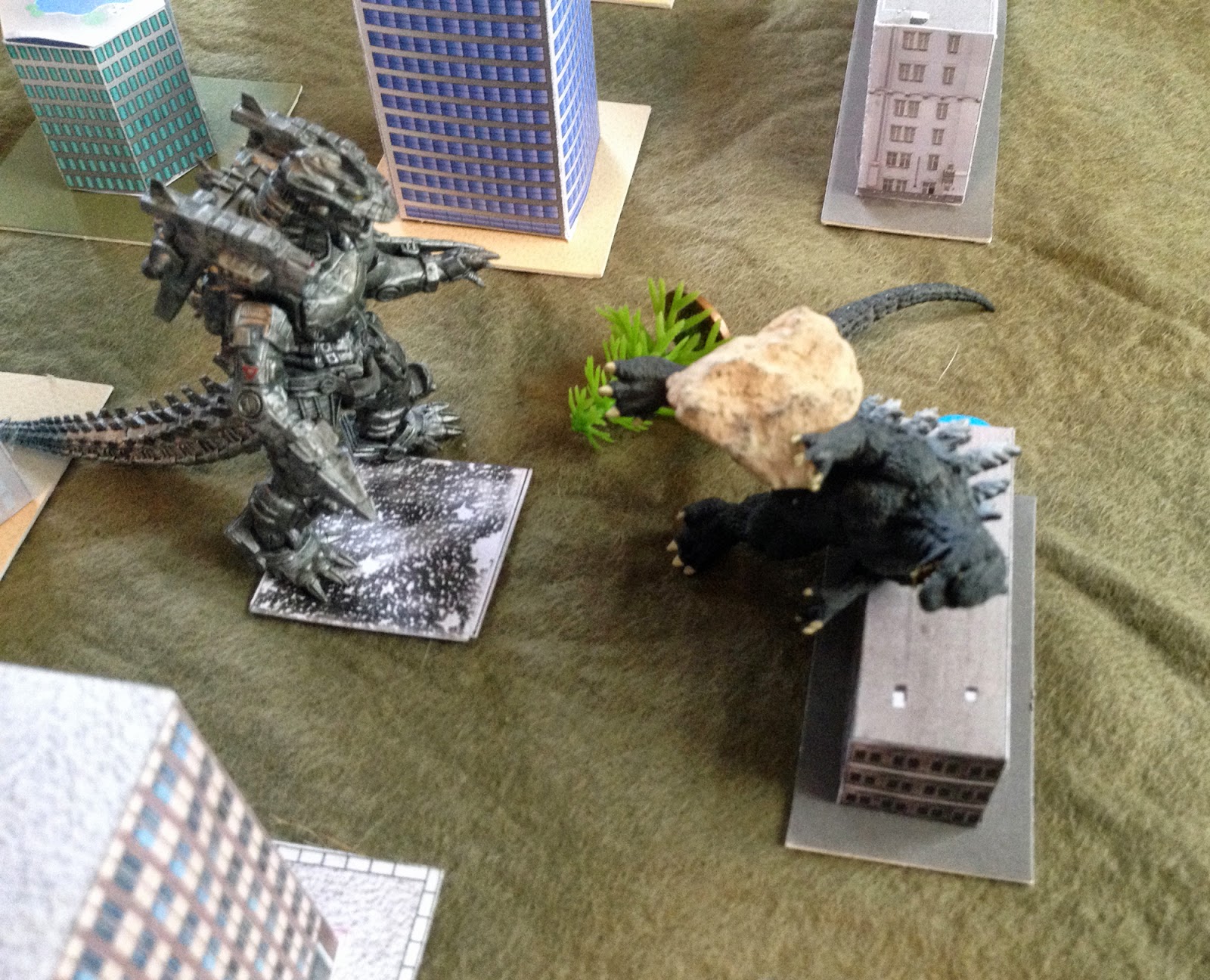 Now it was Godzilla's turn. He hauled himself to his feet, advanced and launched his atomic breath at point blank range. Kiryu took full damage ... 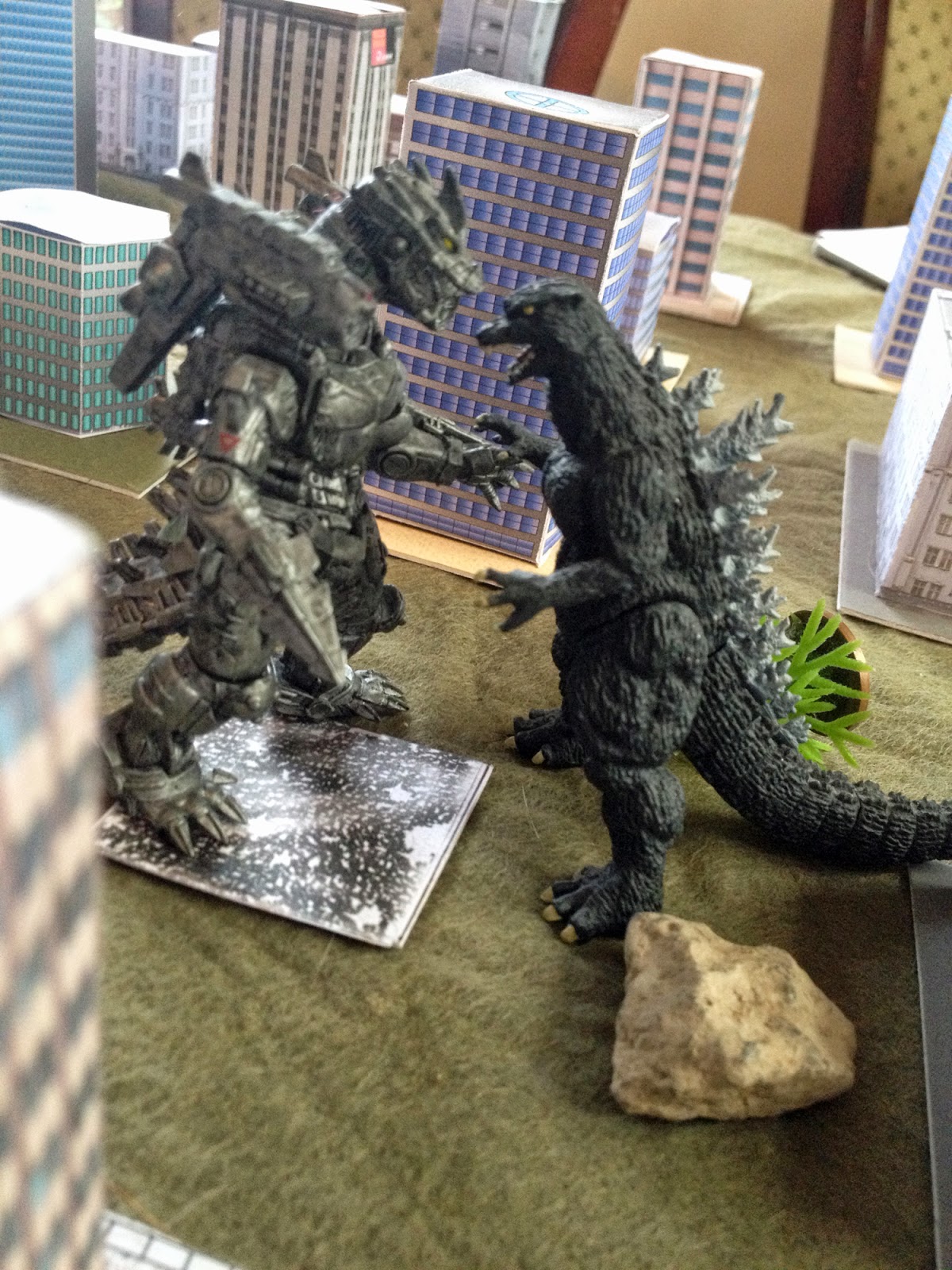 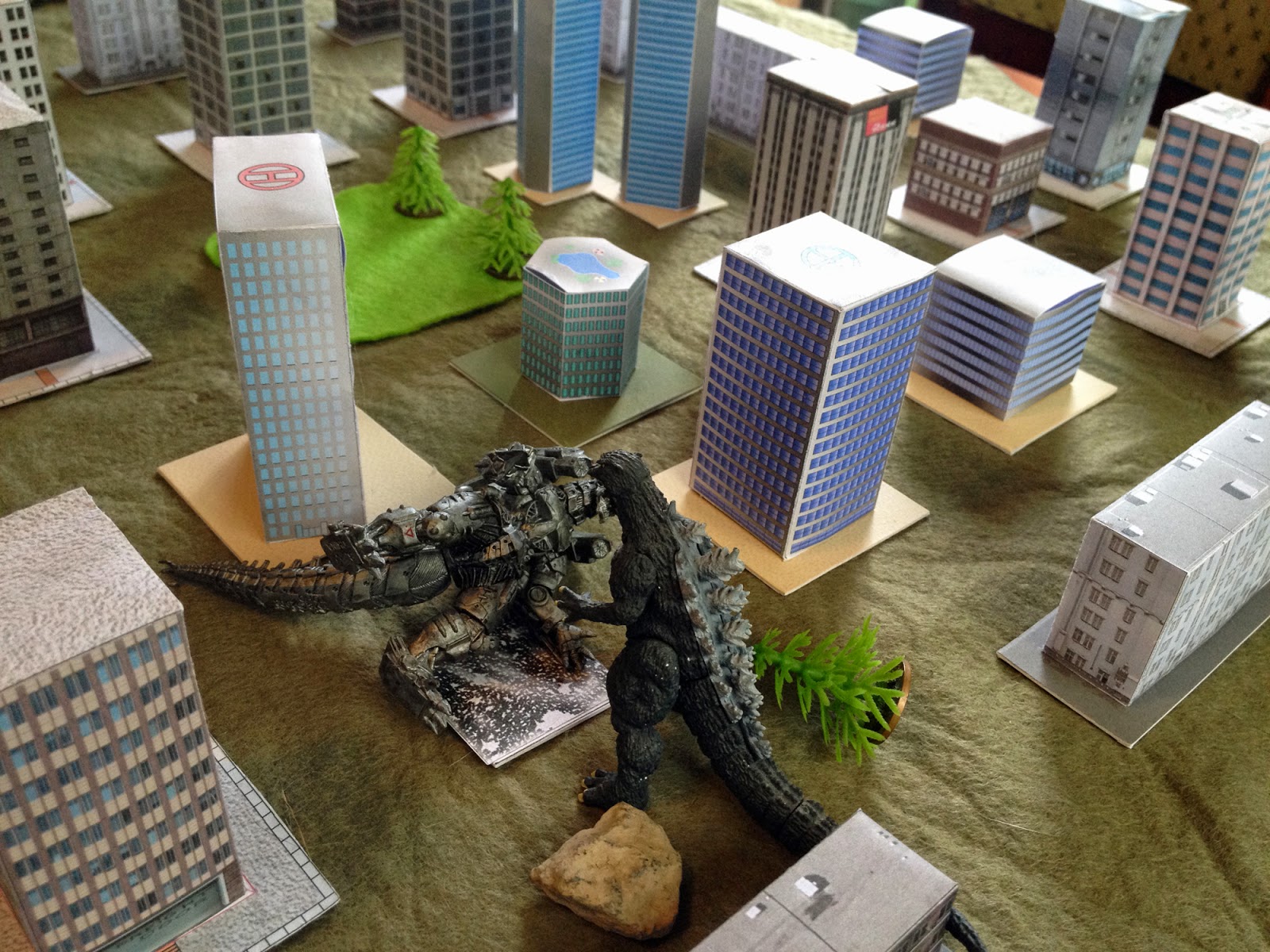 And that was it. There were five turns left, so Godzilla had plenty of chance to cause destruction. And would.

Kiryu inflicted some decent hits on Godzilla, but was unlucky in not hitting with two attacks that would have pretty much finished him off. Taking on Godzilla in close combat is a risky move as well, as the retaliatory attacks can be quite dangerous. Kiryu's atomic power rolls were nothing special either, and it needs a good one from time to time to hep boost recovery of the limited shot weapons. Kiryu's a fun design, though, with the charges on most of its weapons making for some interesting decisions.

I used a 3' x 3' board which seemed plenty big enough for the game. But I need to make more buildings to fill it up with.
Posted by Kaptain Kobold at 18:19