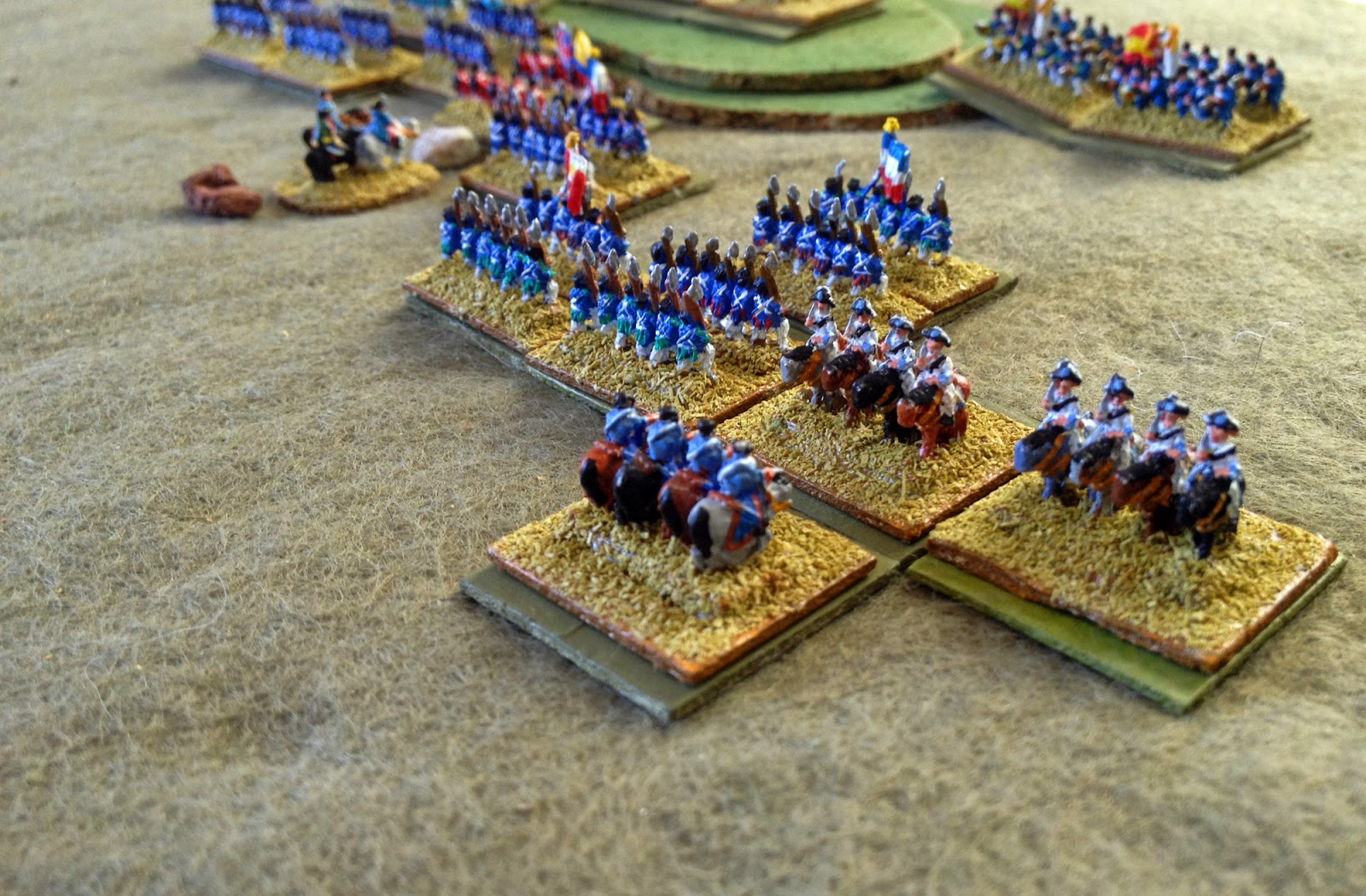 It being a quiet Sunday morning, and having got up early to watch a Boeing 747-400 land at our local airfield (where it will be going on public display as part of a museum there) I thought I'd play another mini-campaign using my Liberation figures. This was partially so that I could test out one final change to my 'Liberated Hordes' HOTT variant before I commit to posting it here. But I've been promising to post it for months ...

I decided to base the campaign around the campaign to take Quito and liberate Ecuador around 1821-22. I kept it very simple though - the Patriots had to win a battle in each of the Coastal Provinces, The Highlands and Quito itself. If they won they advanced from one province to the next. If they lost they stayed where they were, but they could only lose two battles in the first province, one in the Highlands and none at Quito. Any more than this and the Royalists won. This meant that (if my calculations were correct) the campaign had to last for three to six battles.

I used my usual method of generating armies, rolling for replacements and determining the abilities and competence of generals. Both sides had their armies based around a core of regular troops but, as ever, replacements would be militia. Troops could be upgraded during the campaign but I decided to not allow anything to upgrade to elite.

The Royalists maintained a good general throughout the campaign. The Patriots started with a Poor general, but one who was Brave, which meant that he gave extra combat benefits to the element he was with with a penalty that he could be killed.

The Royalists defended in the first battle, and chose a close battlefield, dominated by a steep hill and a marsh. The Patriots ended up emerging through the gap between these two features straight into the teeth of the Royalist line. 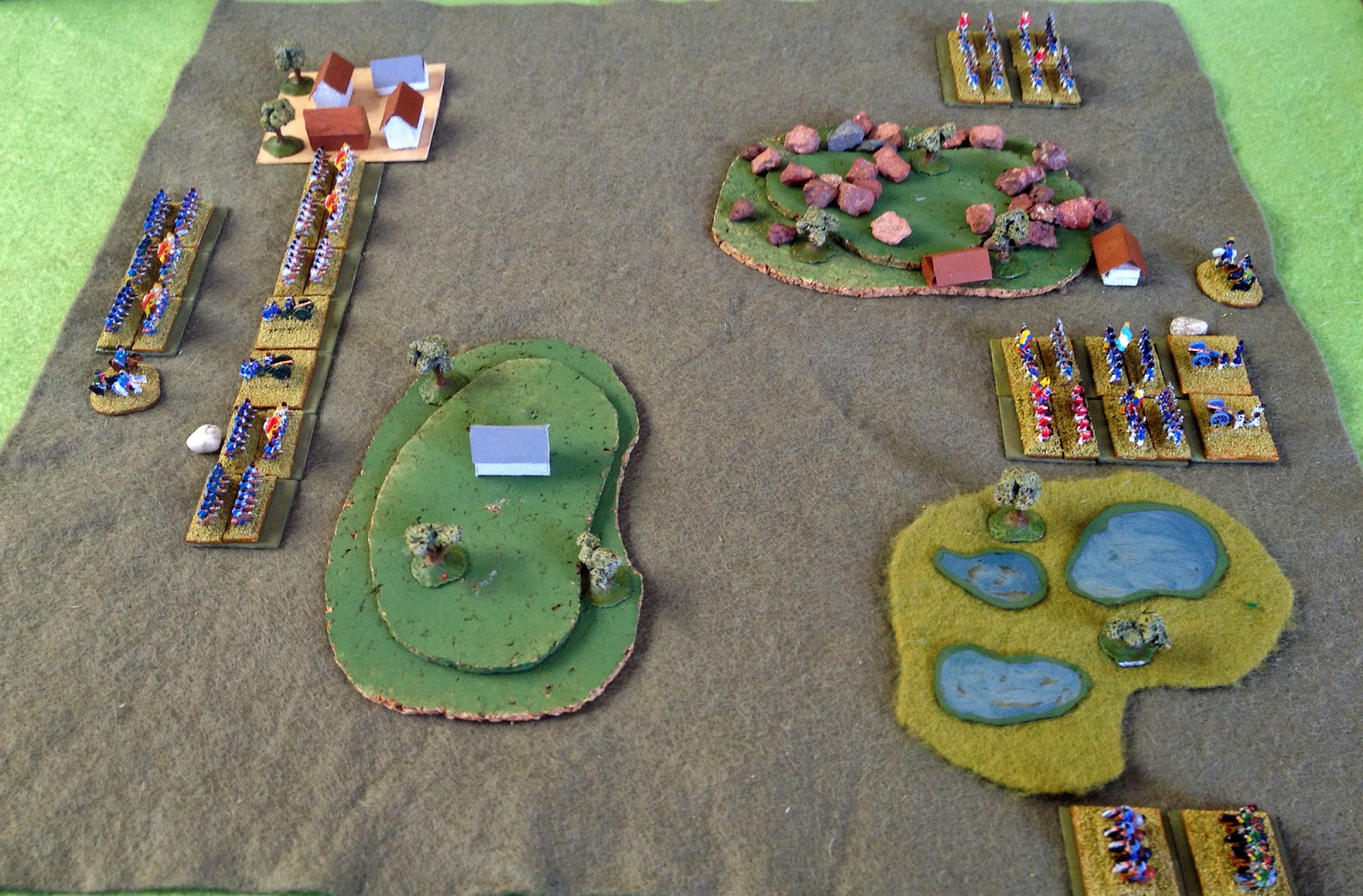 The Patriot general directs the advance of his troops. Their flags show the varied makeup of the army; troops from Chile, Argentina, Colombia and, of course, the British Legion. 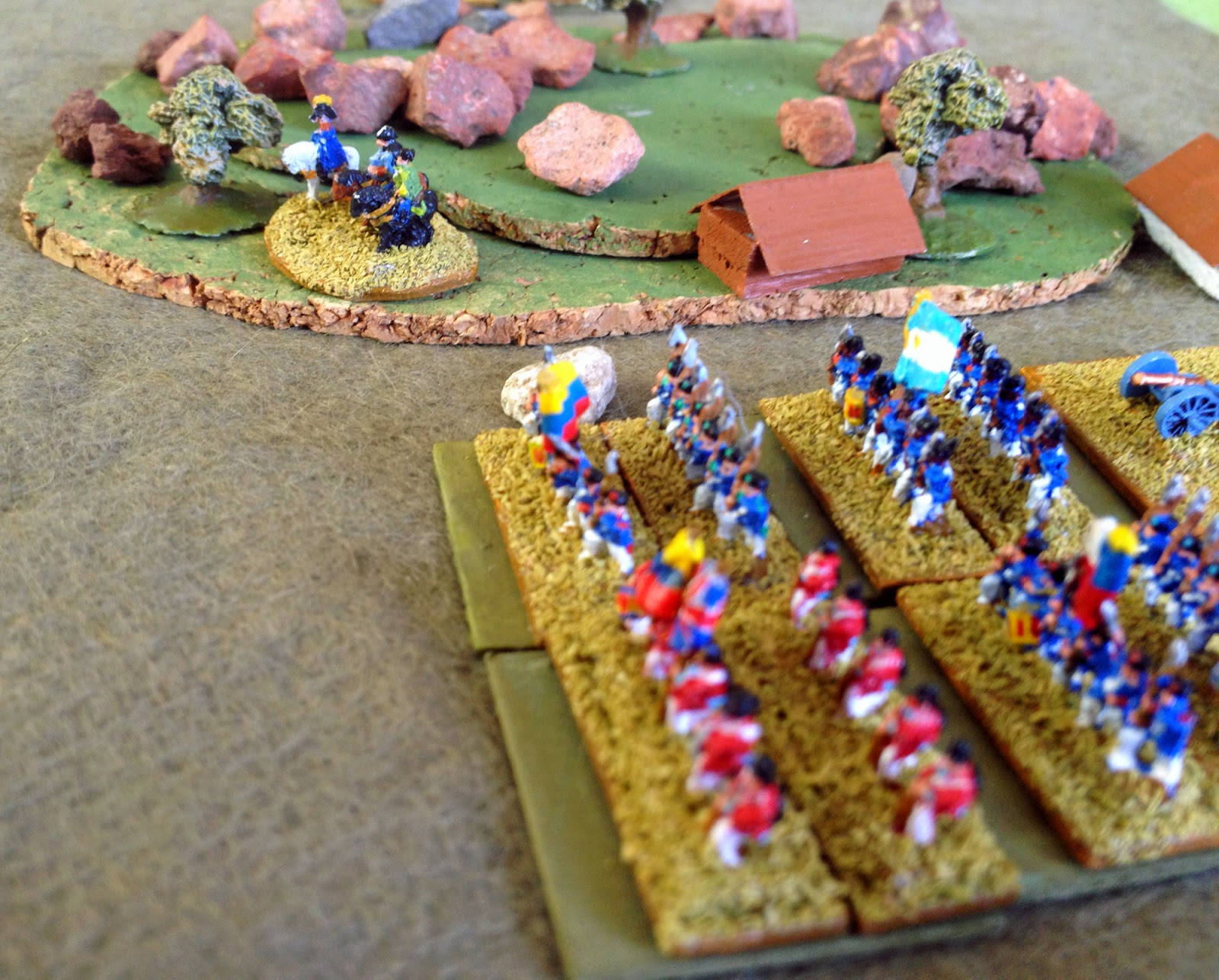 I had each army roll for the possibility of tactical advantages at the start of each battle. The Royalists got a flank march and, as the Patriot advance stalled in the face of musketry, Royalist cavalry fell onto their rear. 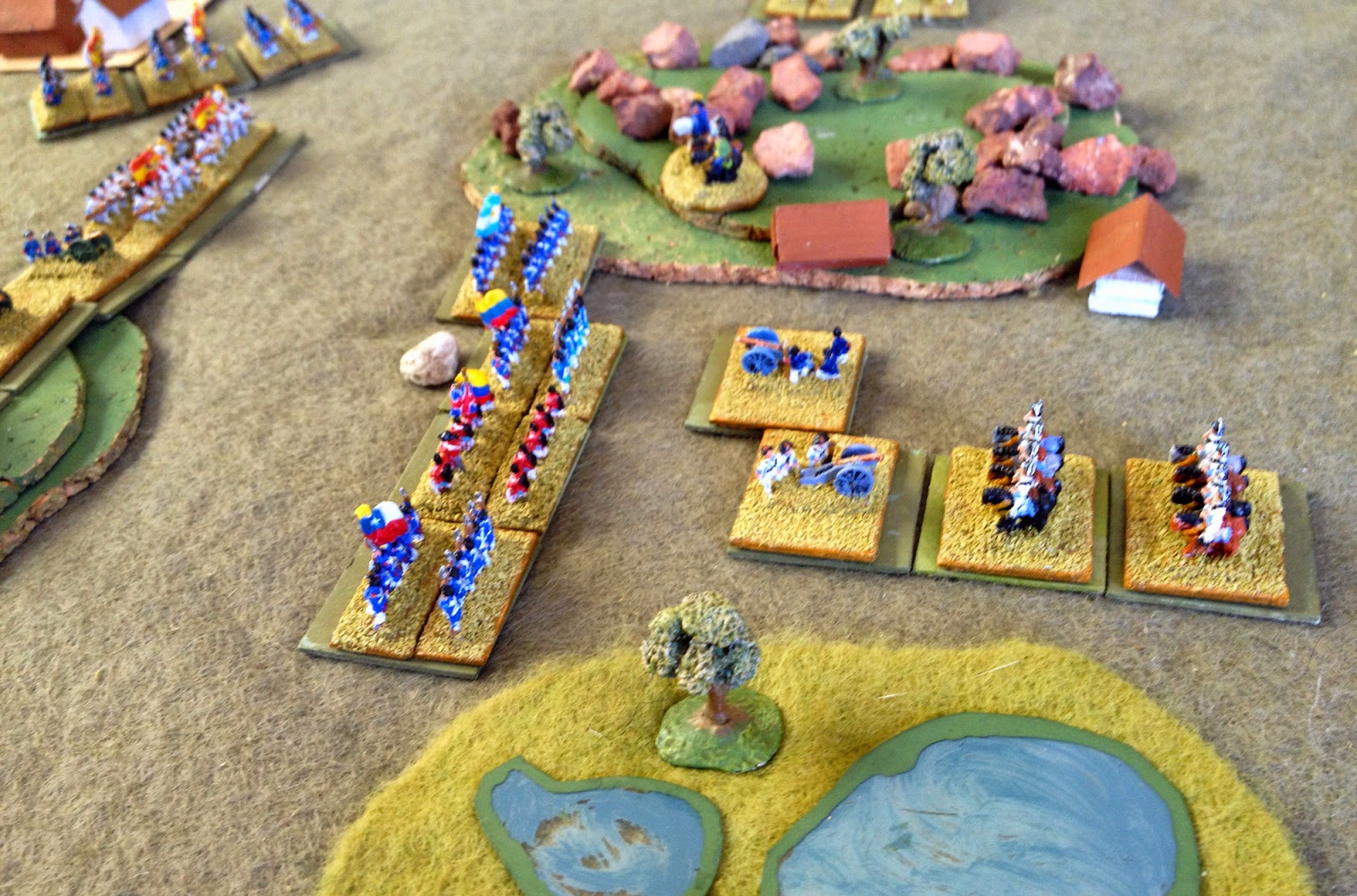 The Royalist line was solid and unwavering, and the Patriots line wasn't. 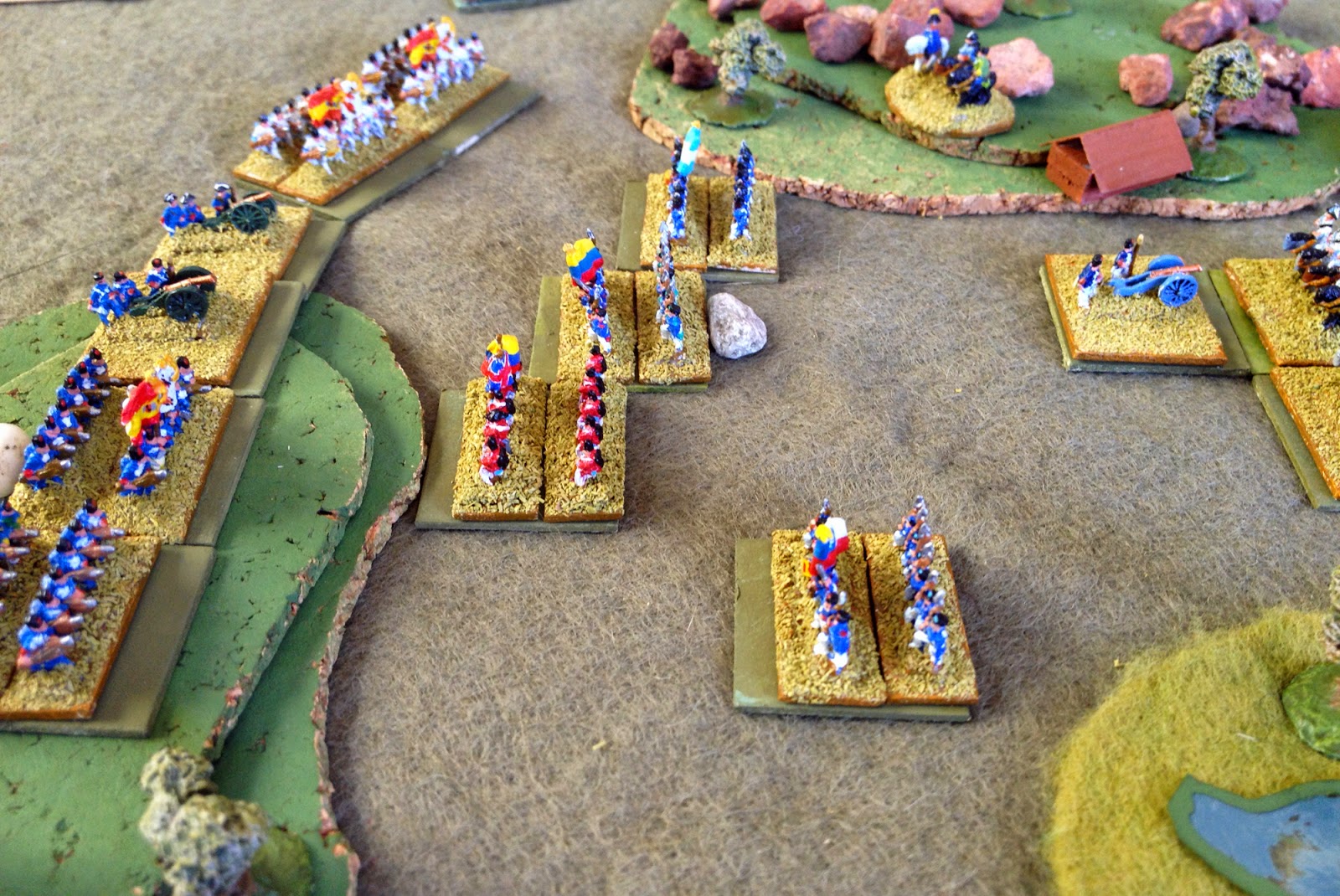 On the Patriot right their locally recruited Peruvian militia tried to turn the Royalist left. They failed. 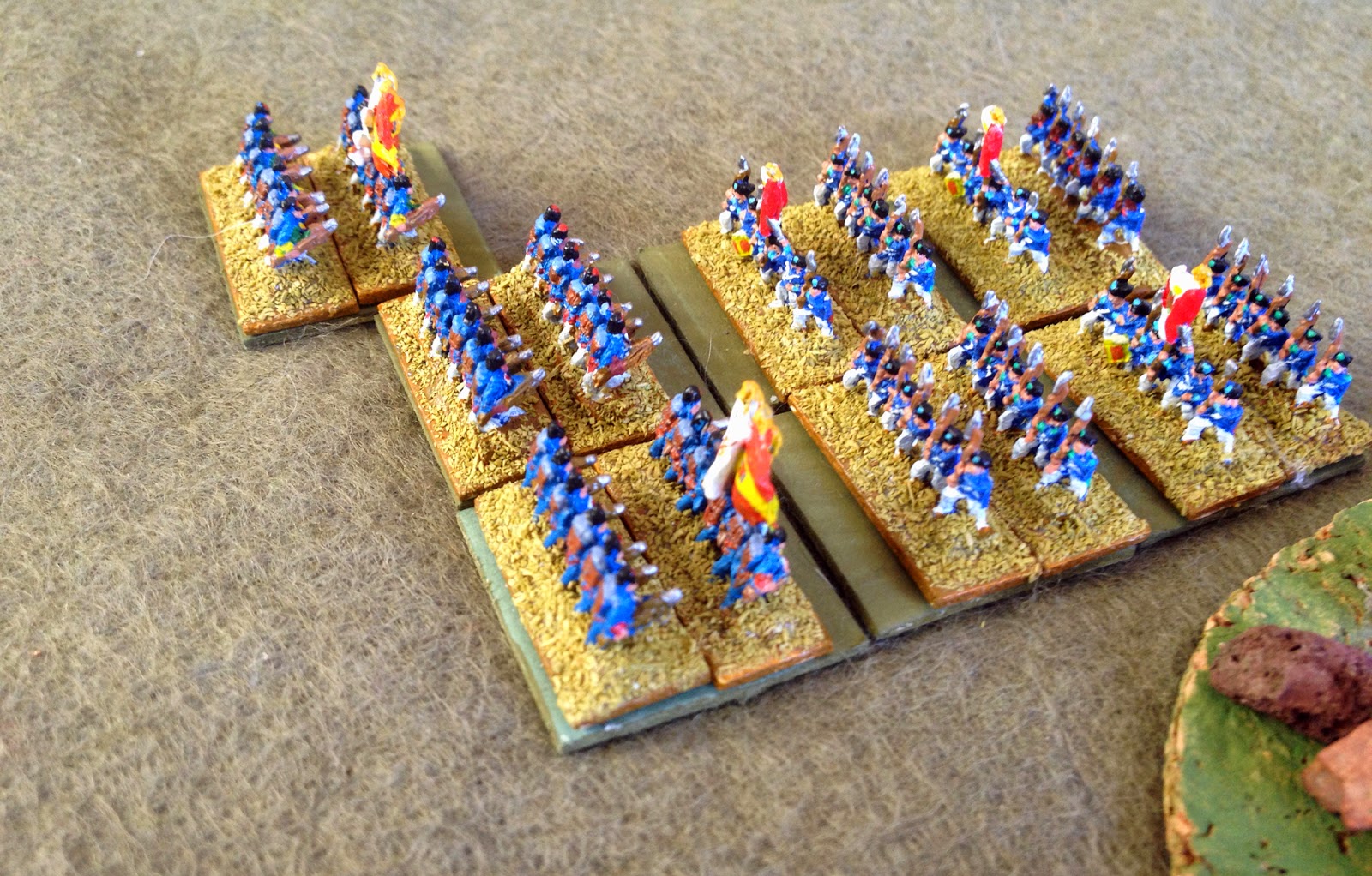 The Patriot general was cut down at the head of his troops, and the Patriots routed. Their losses were considerable - not a good start. 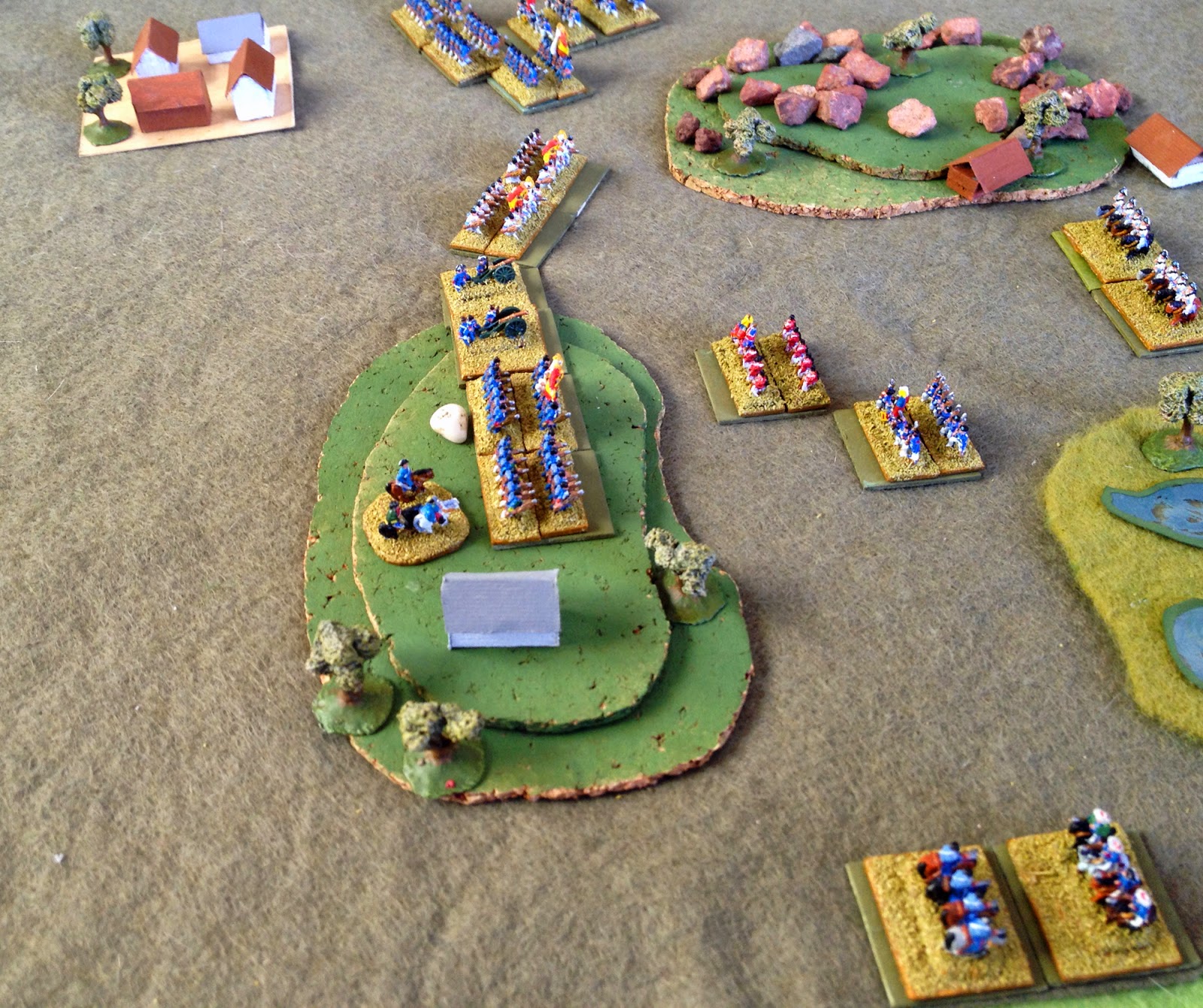 After replacing losses the Patriots found themselves attacking again. Their army was now mostly made up of Peruvian and Ecuadorian recruits, with a small core of more experienced regulars. The Royalists were up for a fight after their previous victory.

The Royalist left was anchored on some rocky hills. The Patriots sent their best troops against the hills, whilst using the militia to cover the centre and to try and turn the Royalist right. 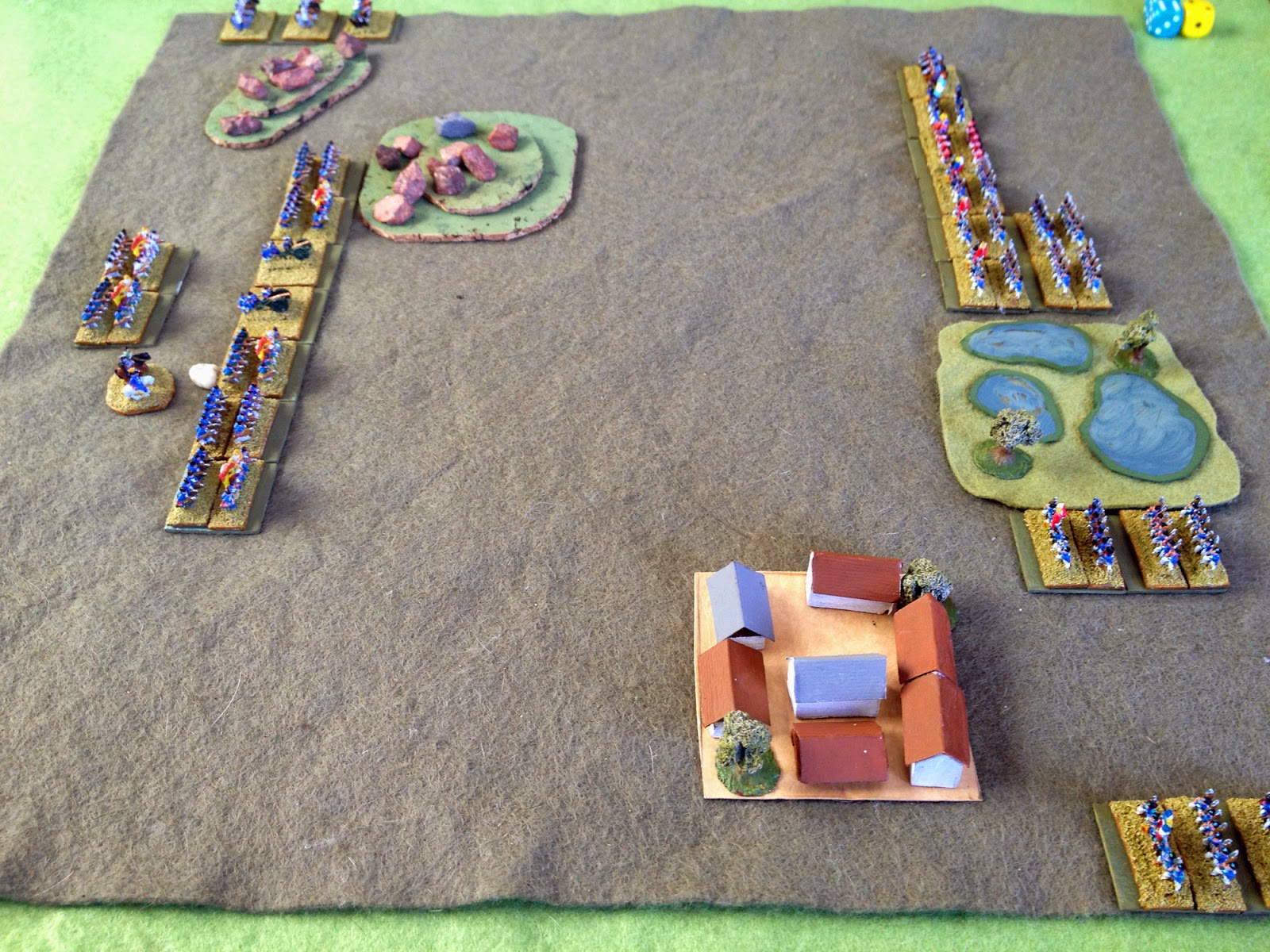 It was the Patriot right which was turned, however, with a rapid cavalry attack 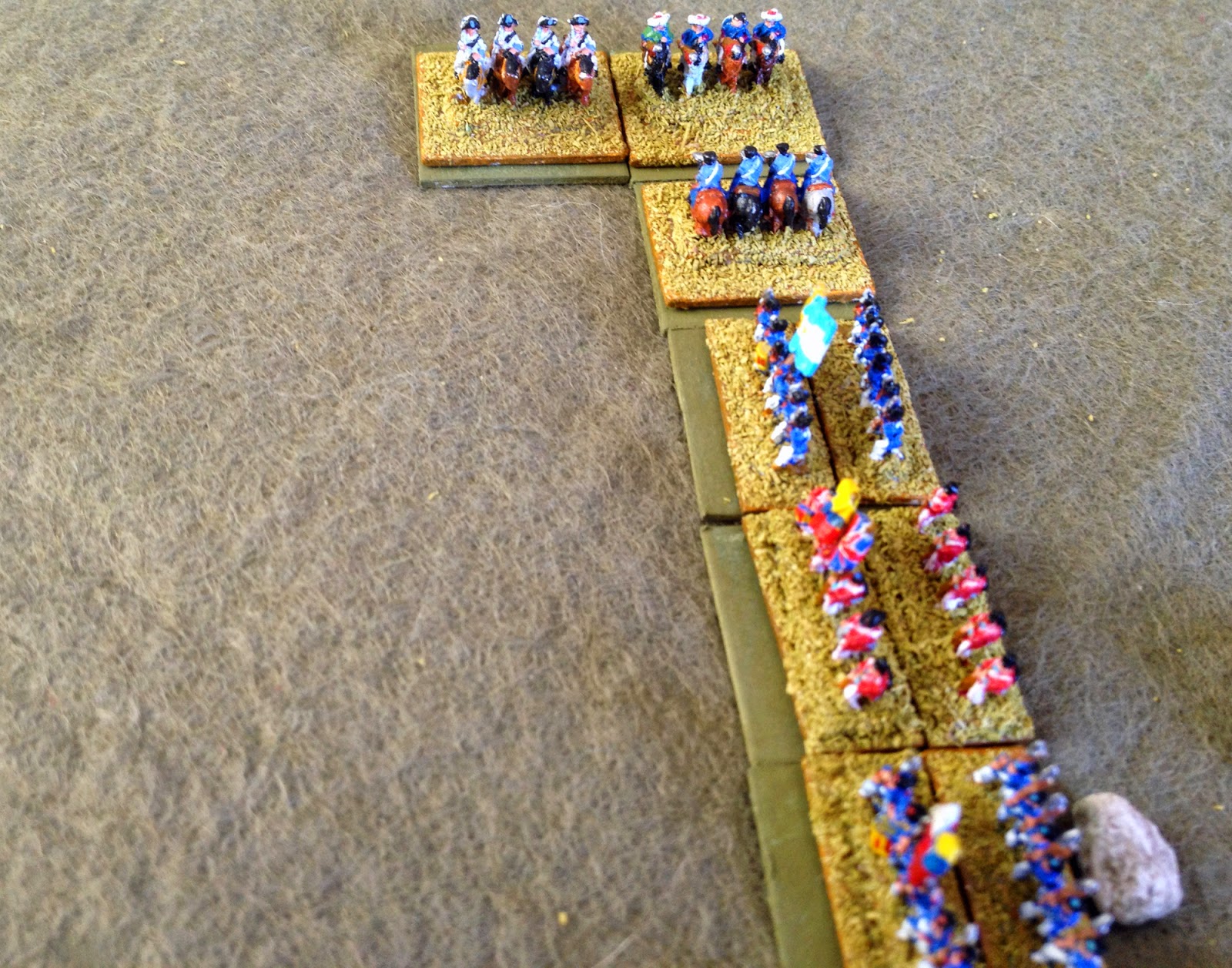 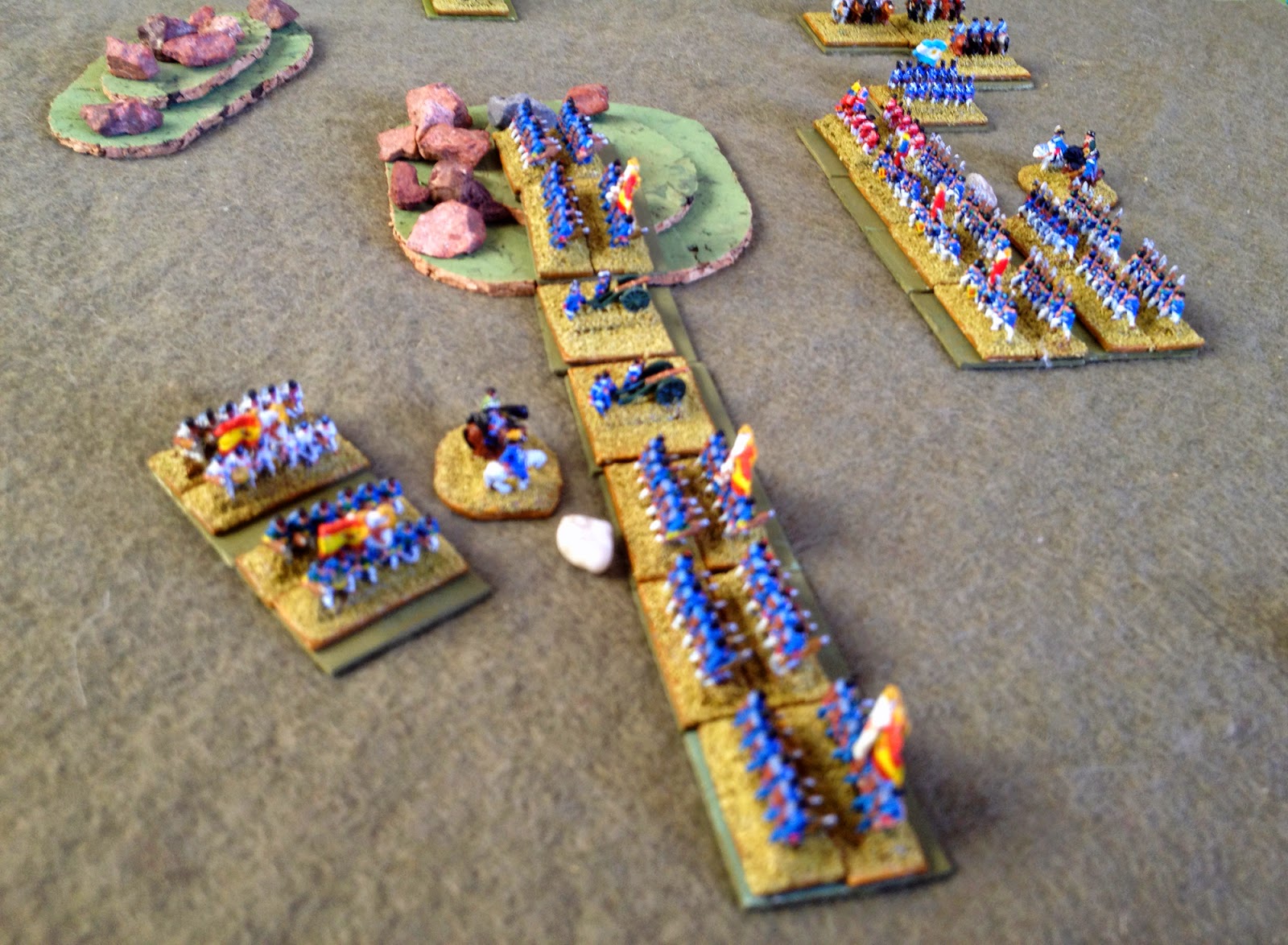 The Peruvians began to threaten the Royalist right. But in the centre the militia were breaking under steady artillery fire from the Royalist centre. 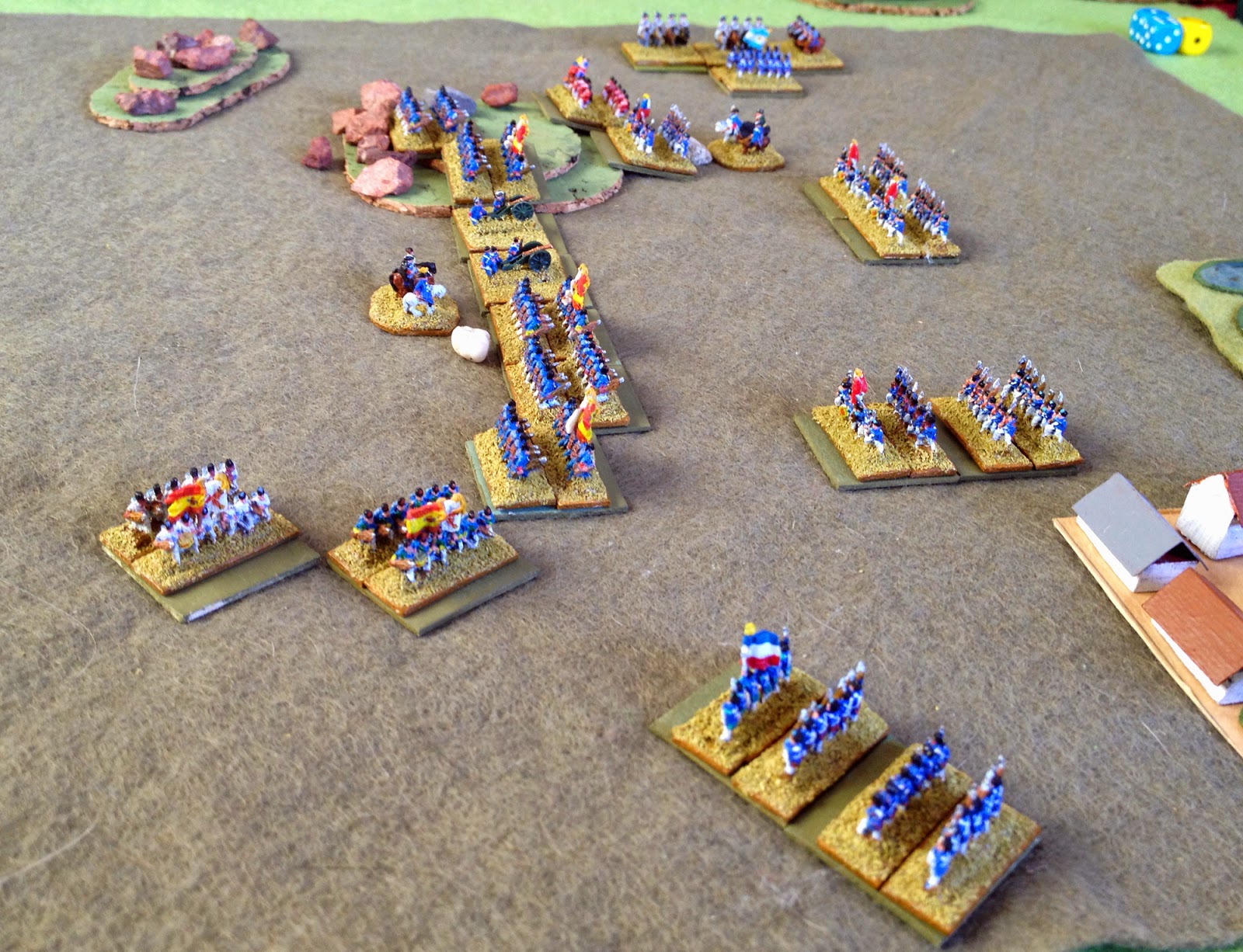 The Patriots reached the hill, but the rest of their army was already breaking, and once again the Royalists secured a victory. 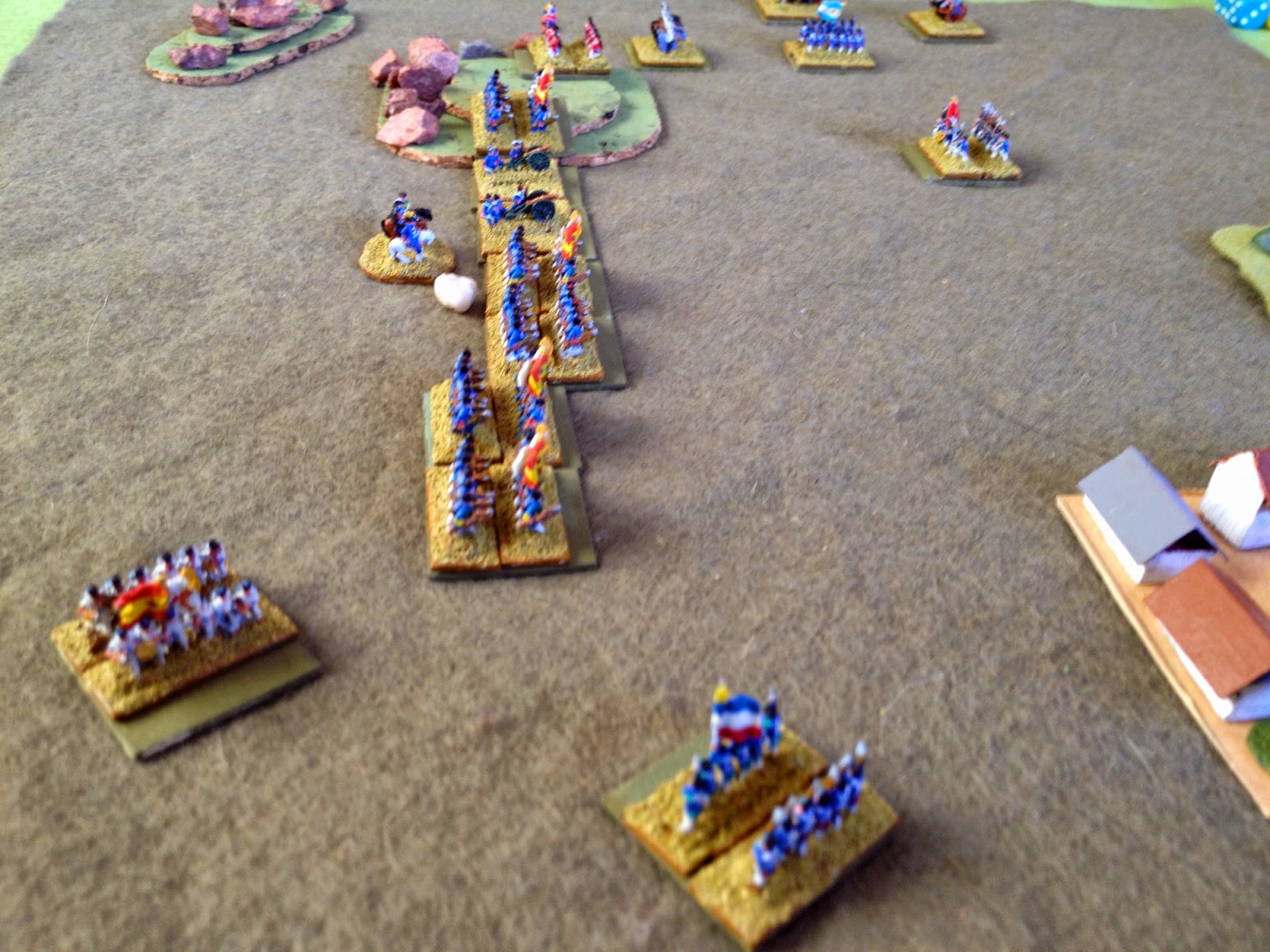 The Patriots had to win the next battle to stay in the campaign. They defended, but it was the Royalists who held the hill-line which was the only significant terrain on the field. 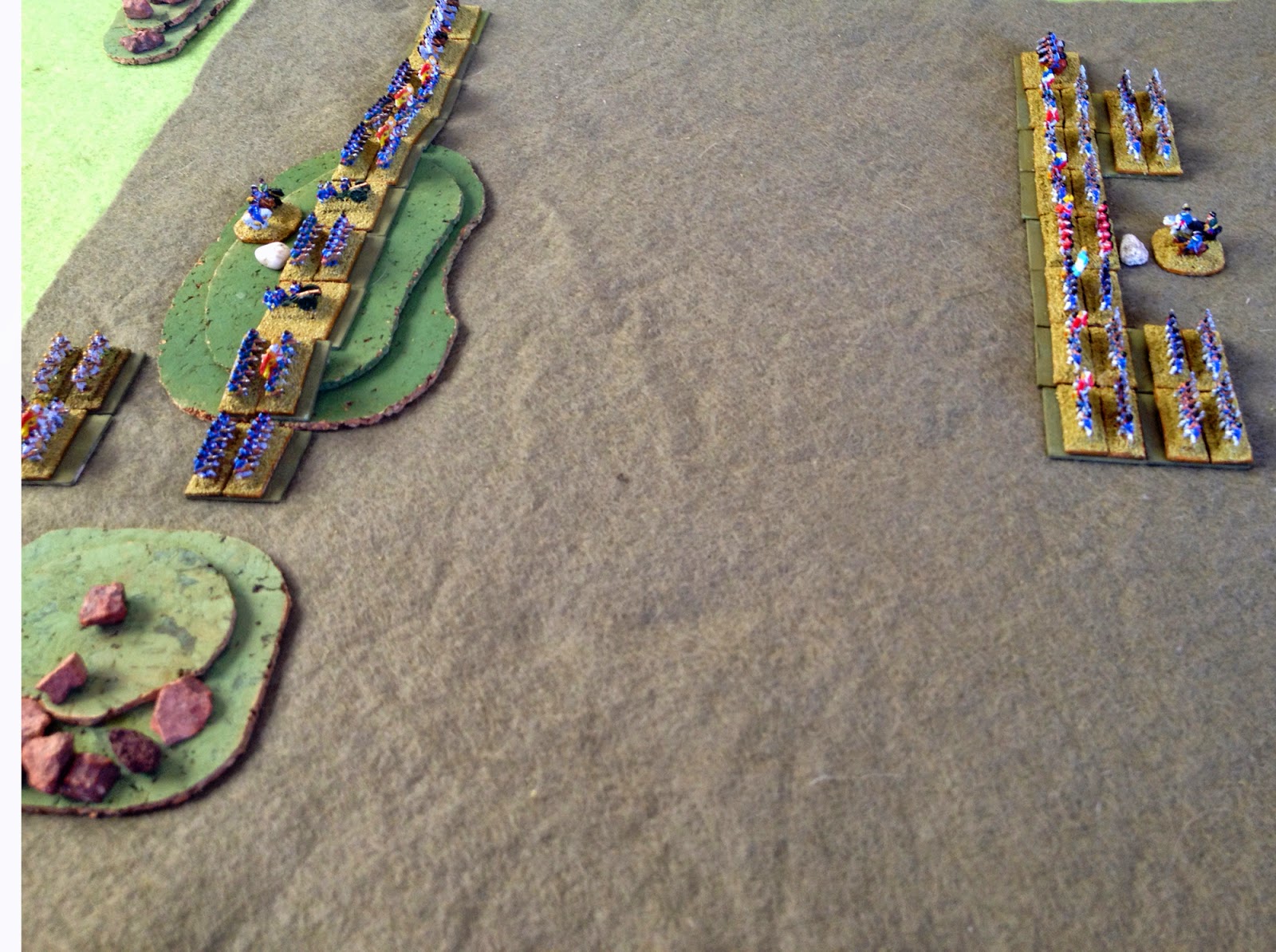 With an army made up almost entirely of militia, the Patriots had no choice but to launch a frontal assault. 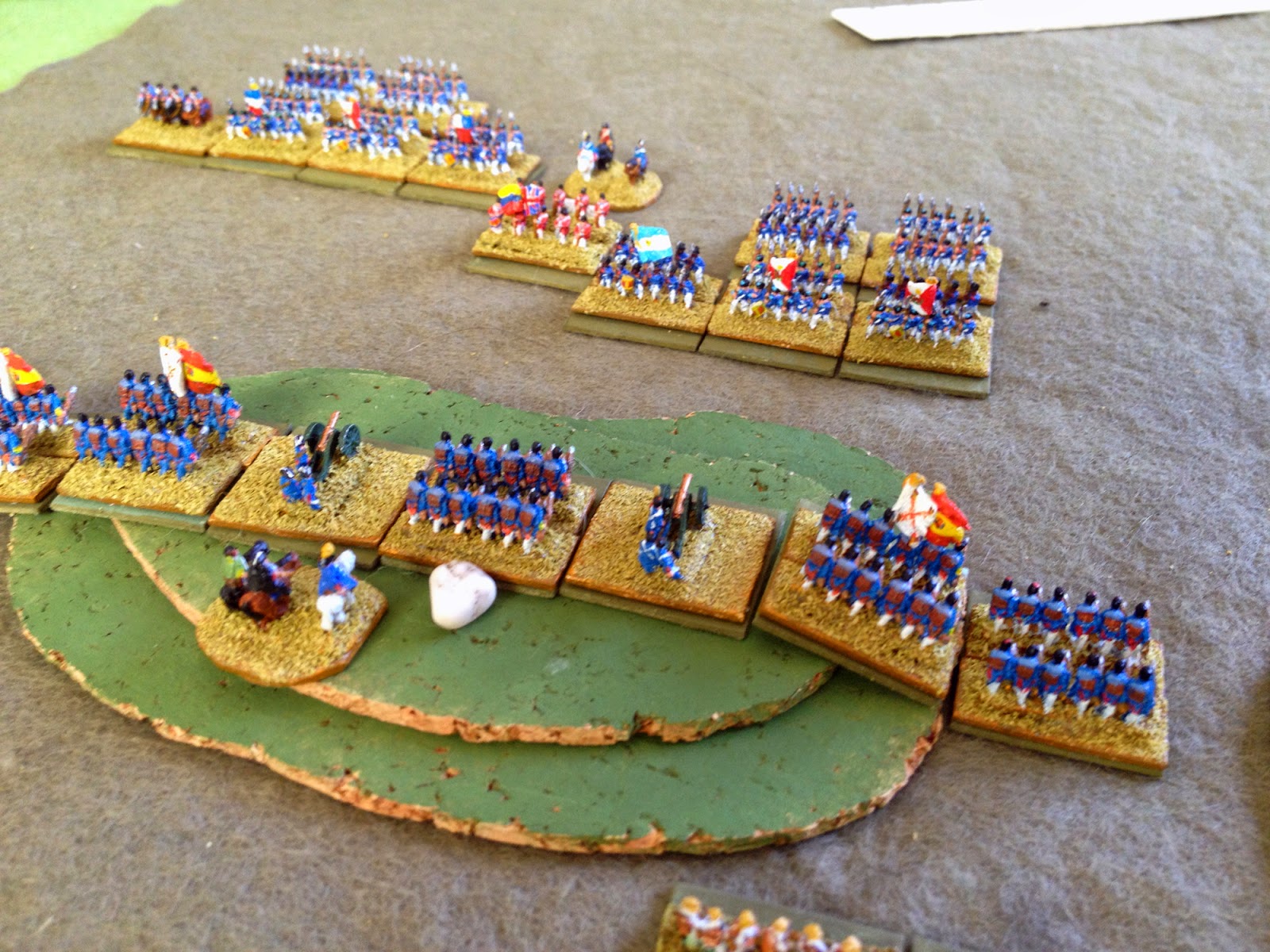 Their right wavered, but the left pushed onto the hill. 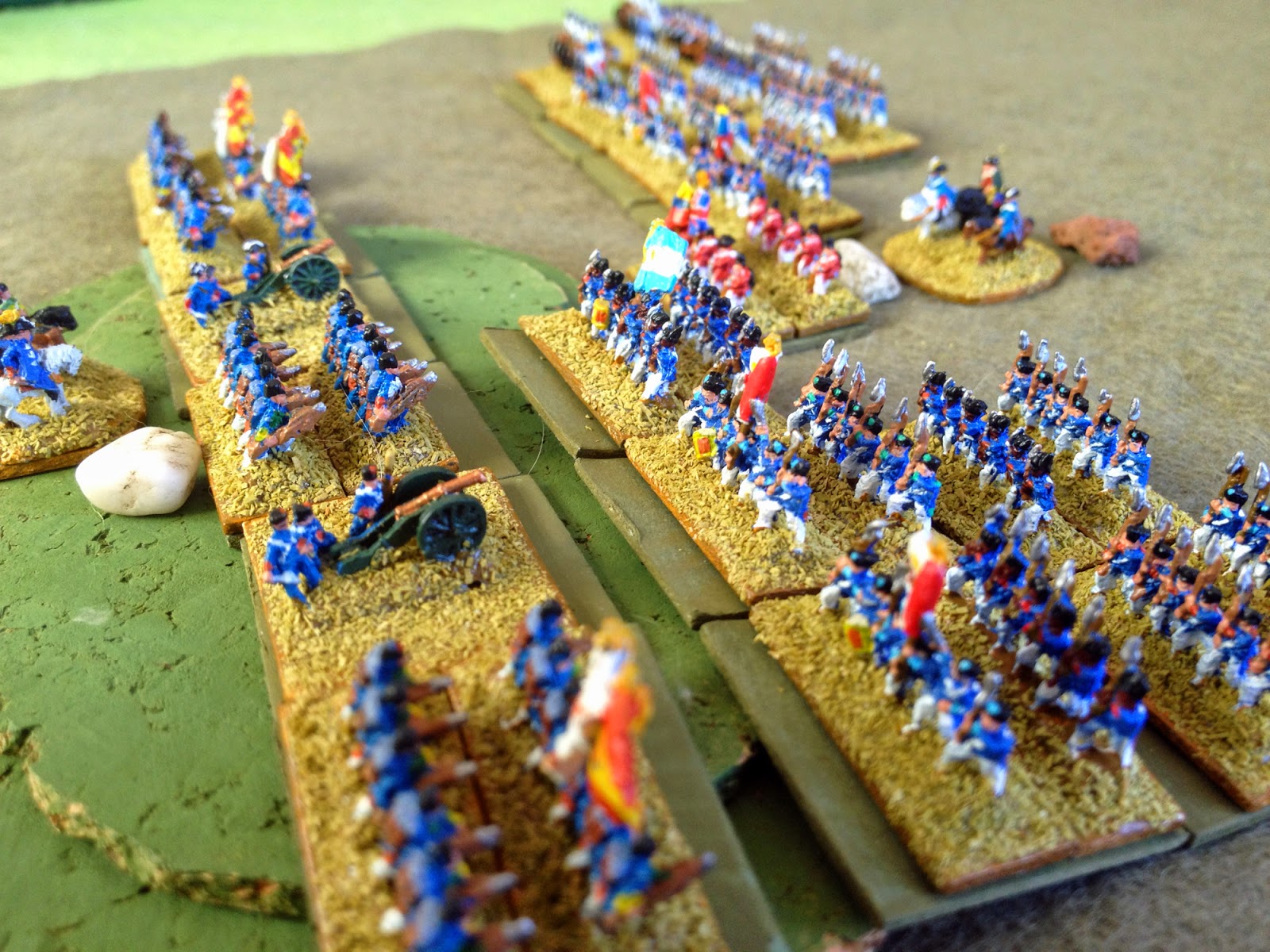 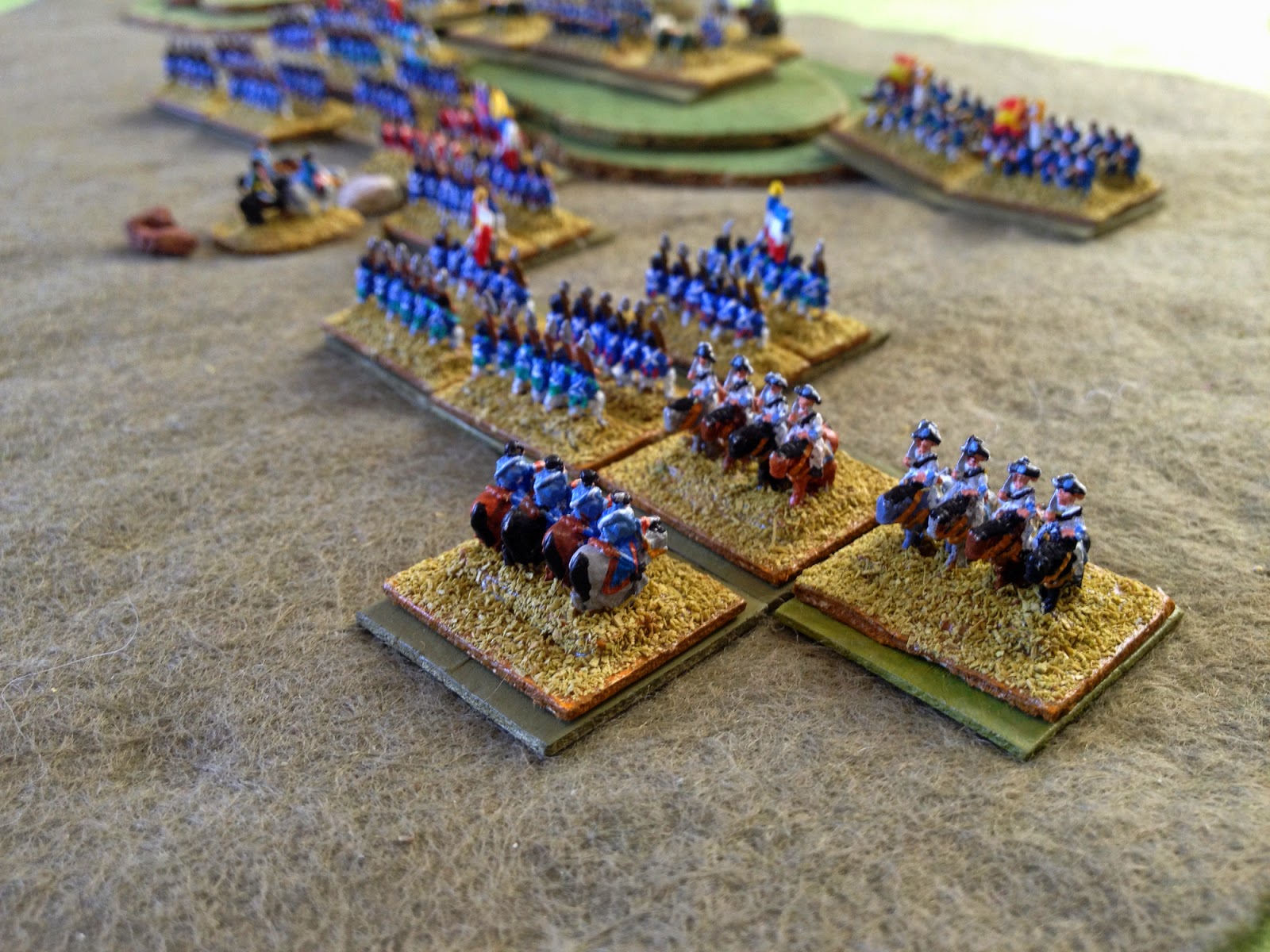 Whilst enjoying some success in the centre, both Patriot flanks were under attack now. 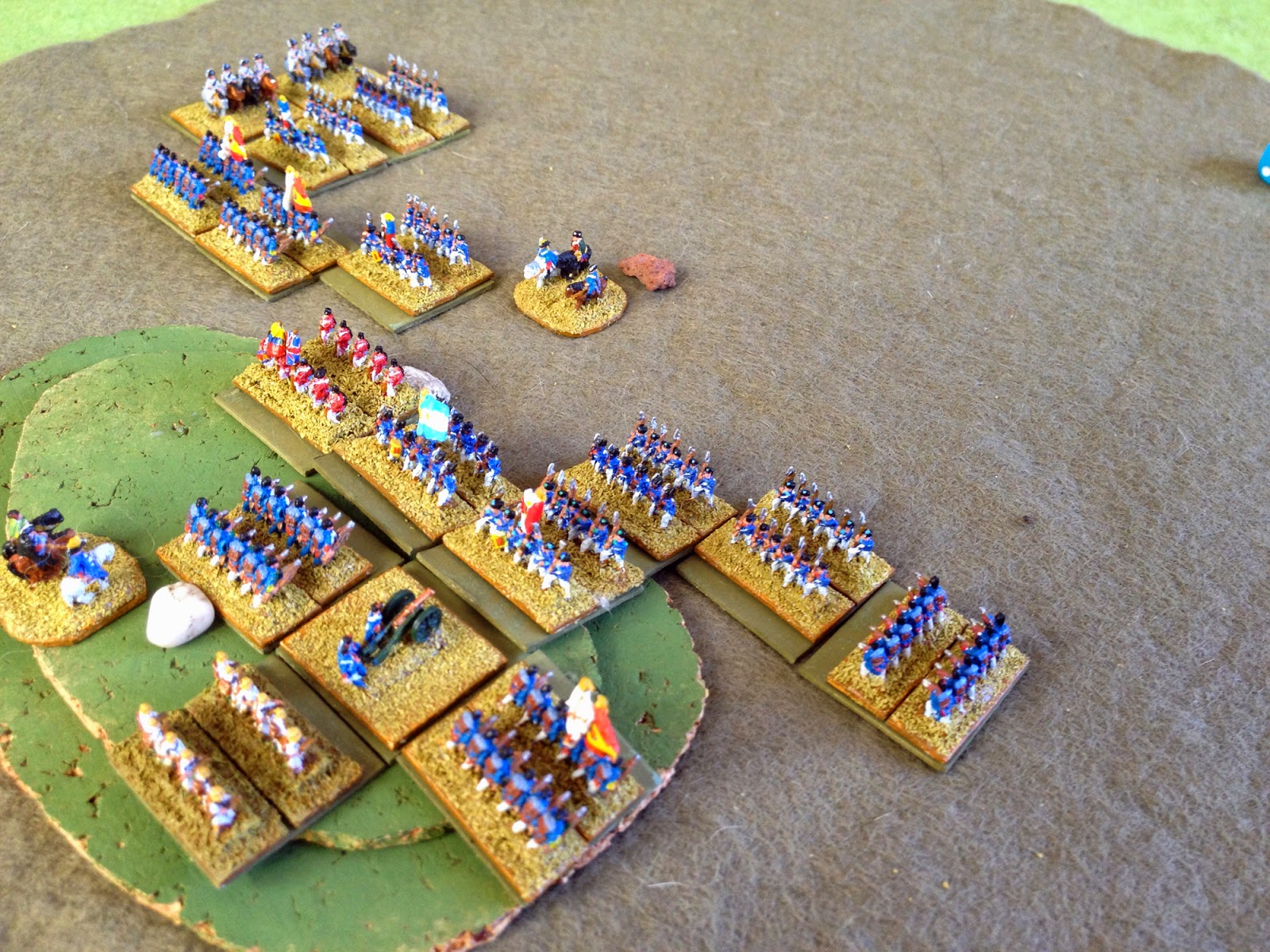 The Royalist commander was killed as the Patriots finally took the hill. 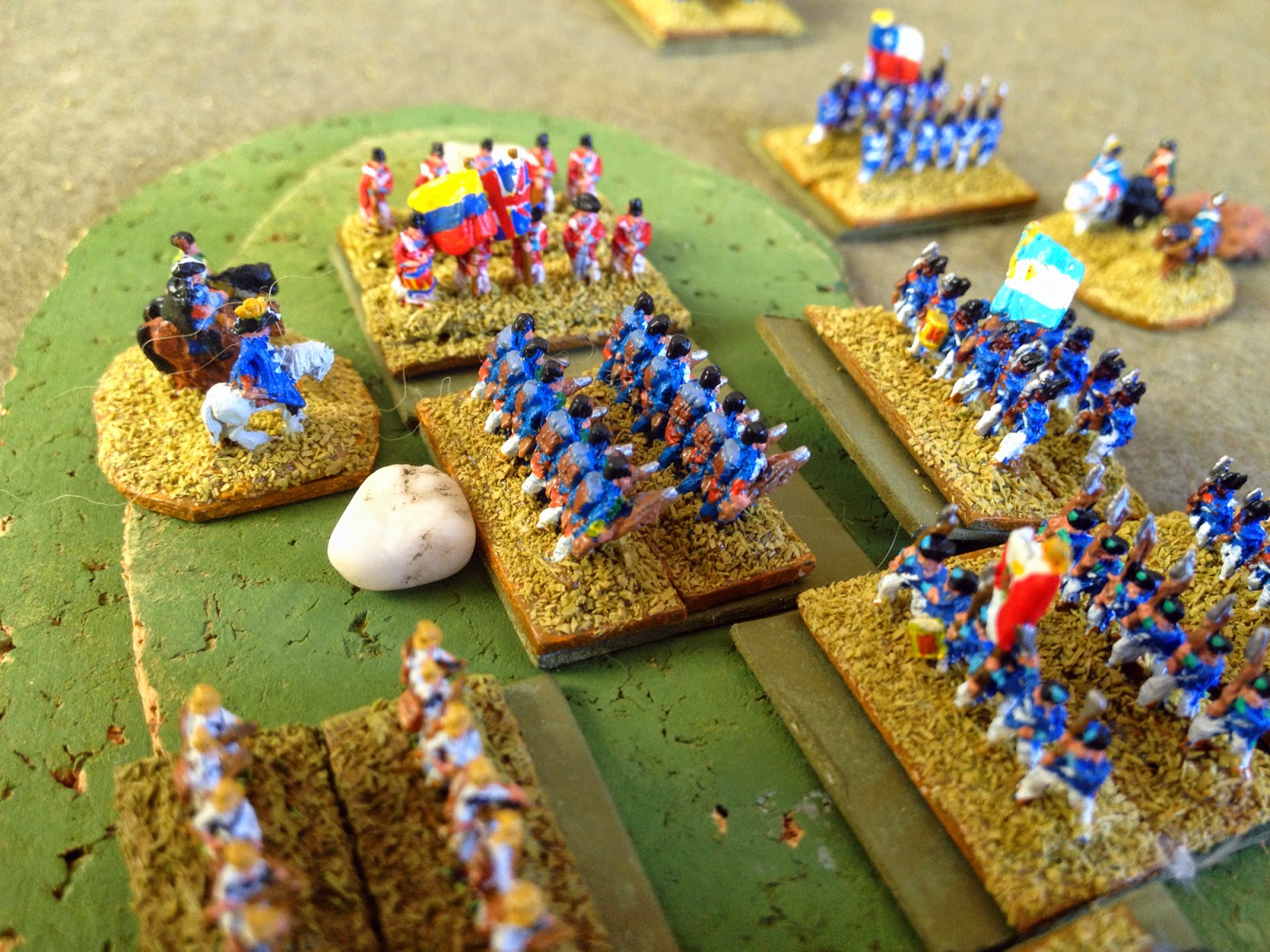 Both sides were teetering on the brink of defeat, but it was the Patriot army which broke first, giving the Royalists the battle and the campaign. 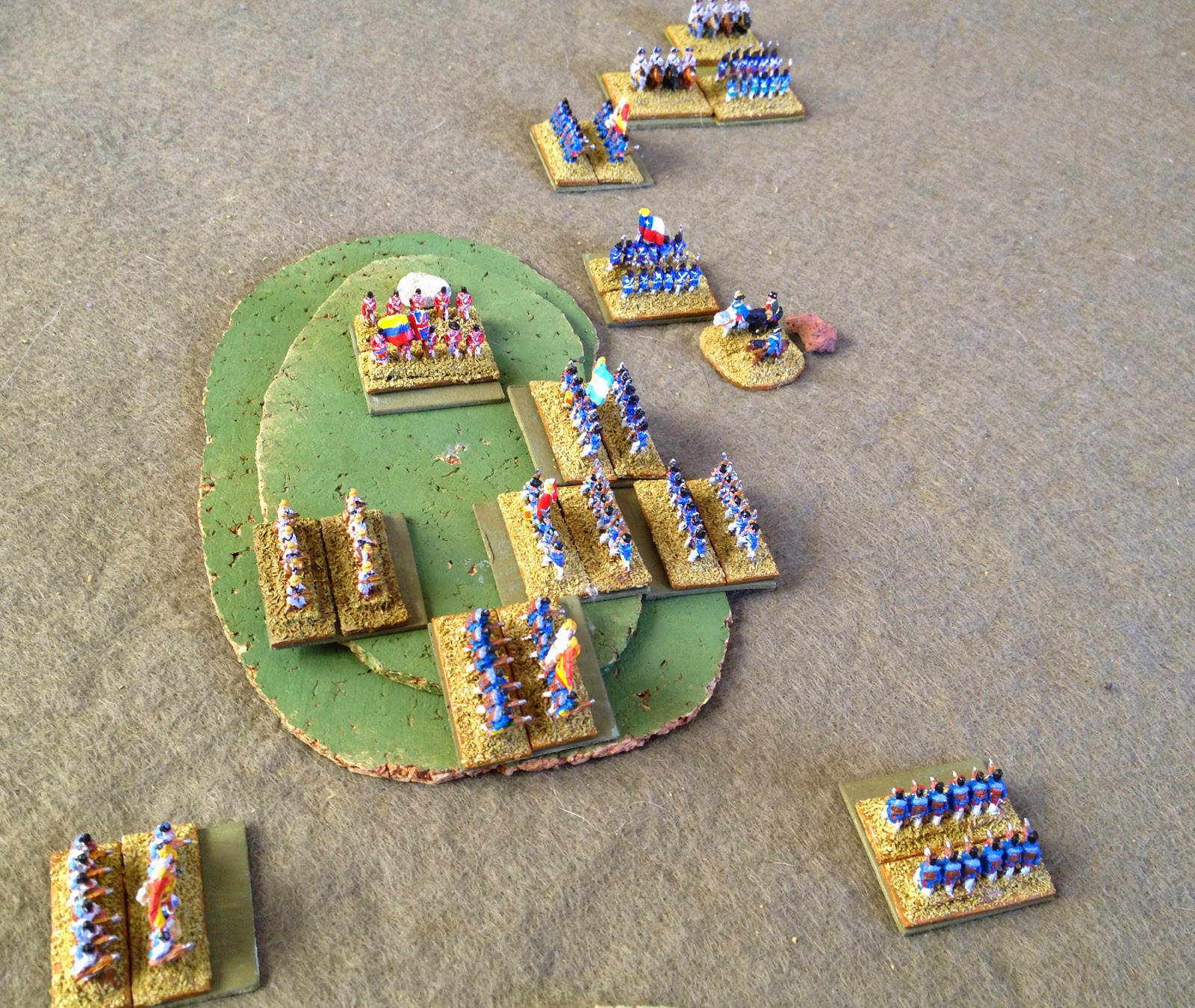 The crushing defeat which the Patriots suffered in the first battle was the key to the Royalist victory. The Royalists lost nothing, so still had their core of regulars, plus the troops which got upgraded. This left them in a position of great strength. The Patriots were then unlucky in the second battle, losing three elements to deadly fire from the Royalist artillery, a setback from which they never recovered. In the third battle the Royalists were in a strong position, but the Patriots pushed into them by sheer bloody-mindedness and almost won the day, which would have evened the armies for any future battles.

In two games the Good Royalist general was able to use his ability to, once per game, roll two PIP dice and pick the best to advantage, something which never seems to happen in most games I play. In both cases there were bounds where being able to do lots of things at once would be good - and the general got lots of PIPs to do them with.

The change I tried out was one I'd worked with before, requiring elements to shoot at enemy elements directly in front of them rather than ones that were just in arc (which is how HOTT allows things to happen). This stops elements ganging up on others so easily and makes firing slightly less effective. encouraging more close assaults where overlaps can be used to gain an edge.