Let's travel back in time to the 15th century ... WHOOSH! 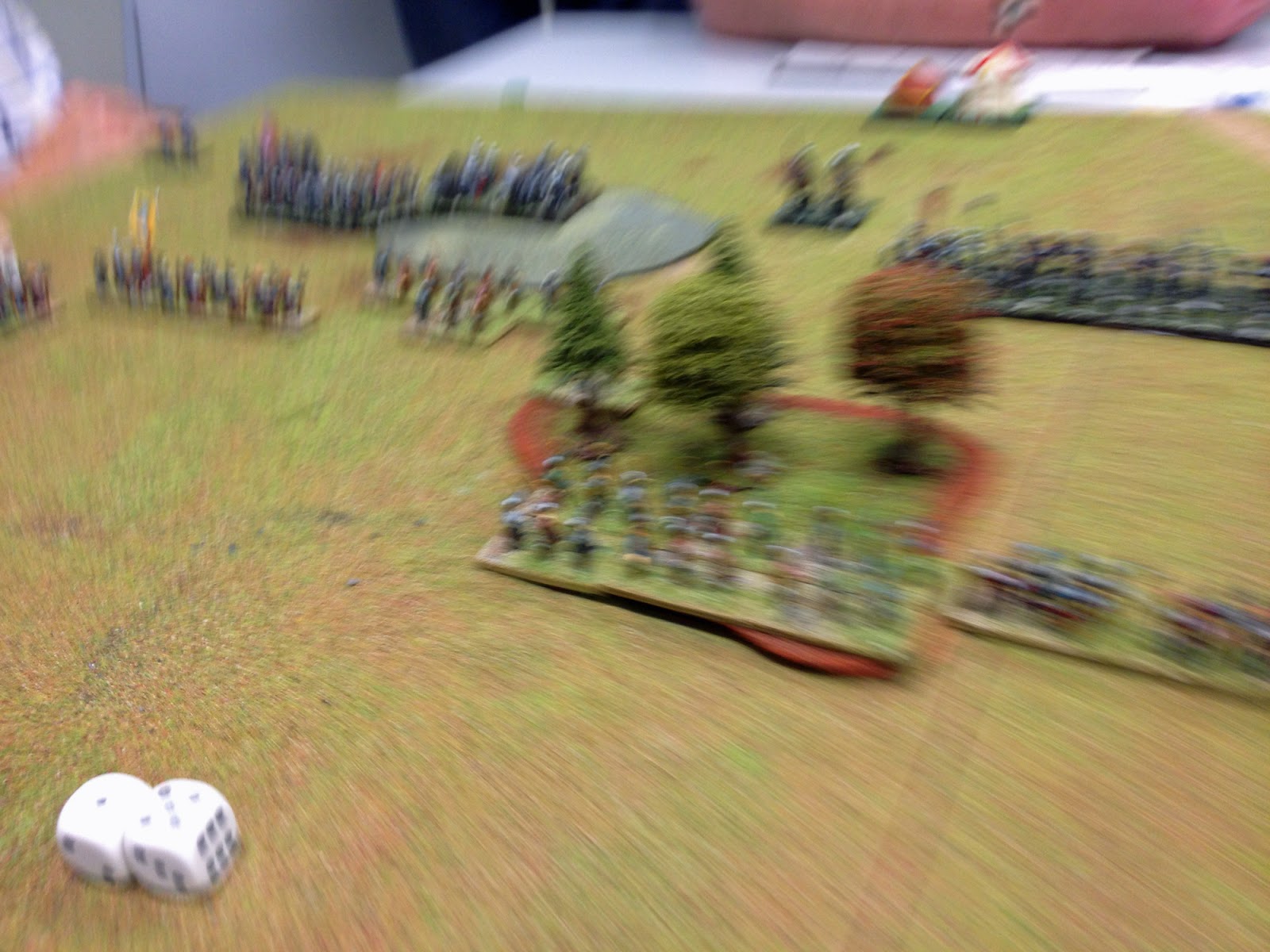 OK, it's another dodgy photo of what was supposed to be some troops set up at the start of a game of big-battle DBA 3.0, featuring a French Ordonnance army against a Wars of the Roses English. Gary and I took the heroic French, whilst Caesar, Ralph and Peter were the perfidious English.

Here's the battle a turn or so in. The English had worked light cavalry around the French right, which was where their knights were massed, ready to charge. In the centre the solid English longbowmen faced of French men-at-arms, whilst the outclassed French archers lurker i the wood. And on the French left more archers and men at arms faced yet more English archers and men-at-arms, lus a grand battery of artillery. 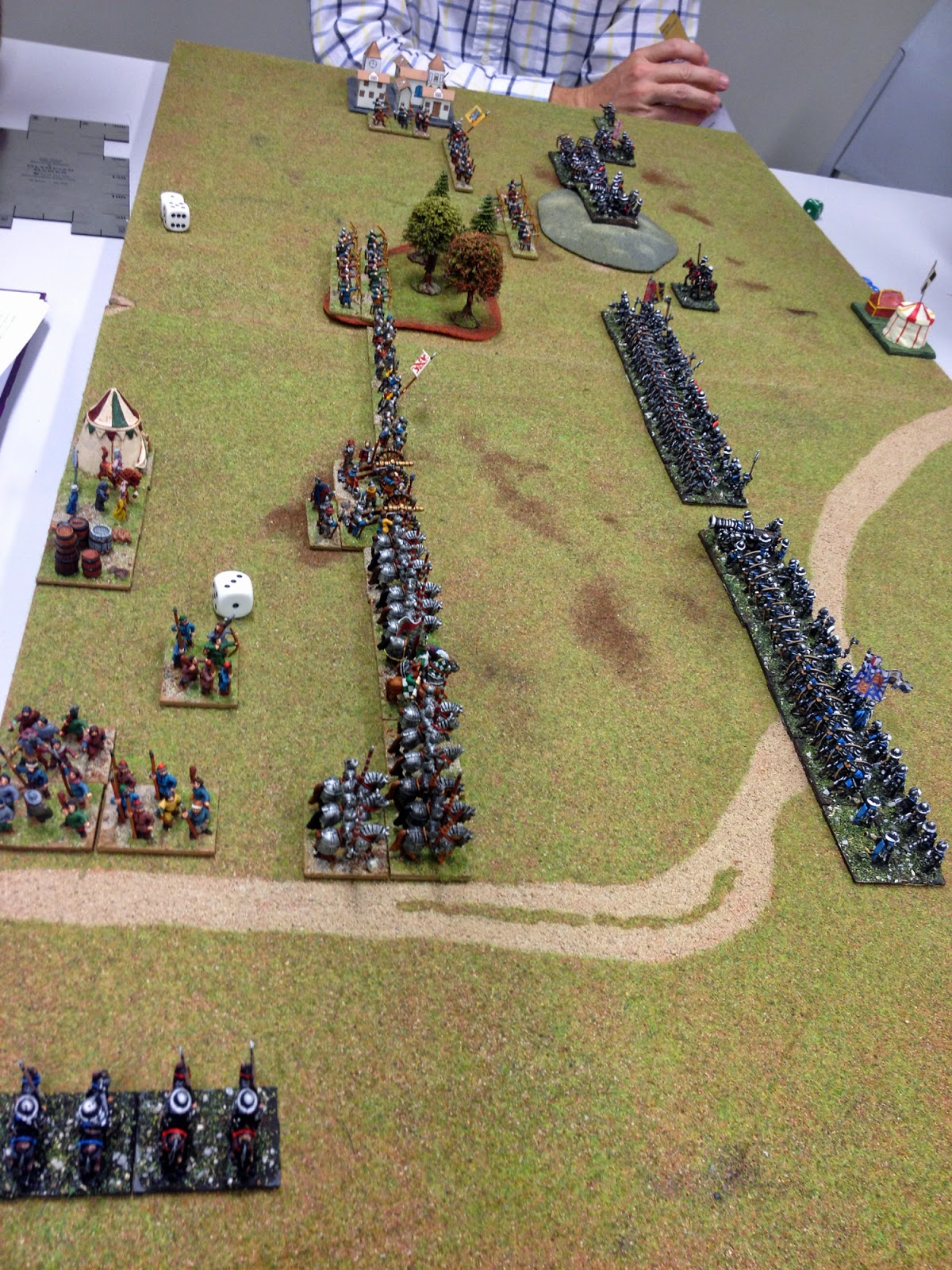 The English, painted by Caesar. 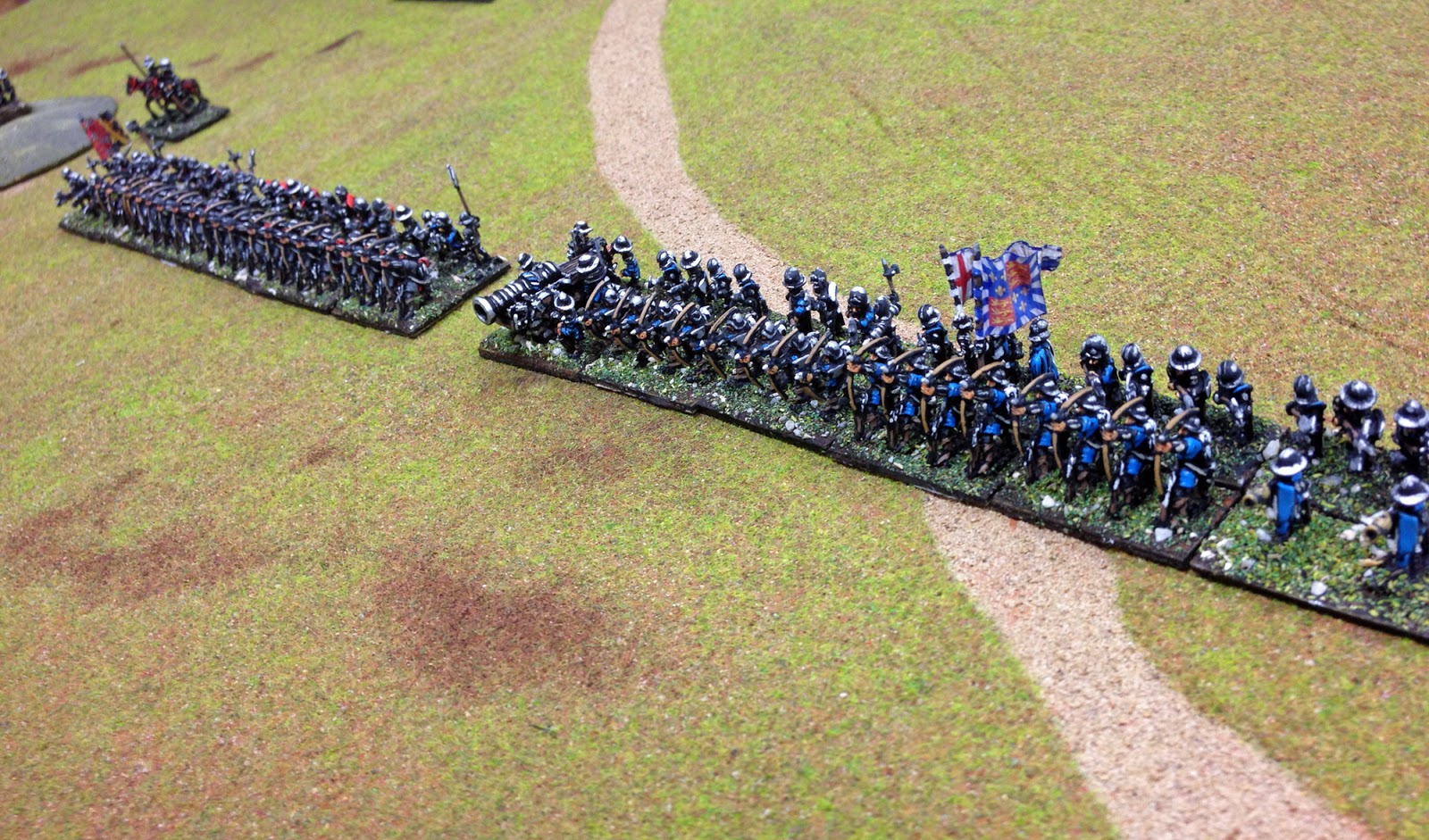 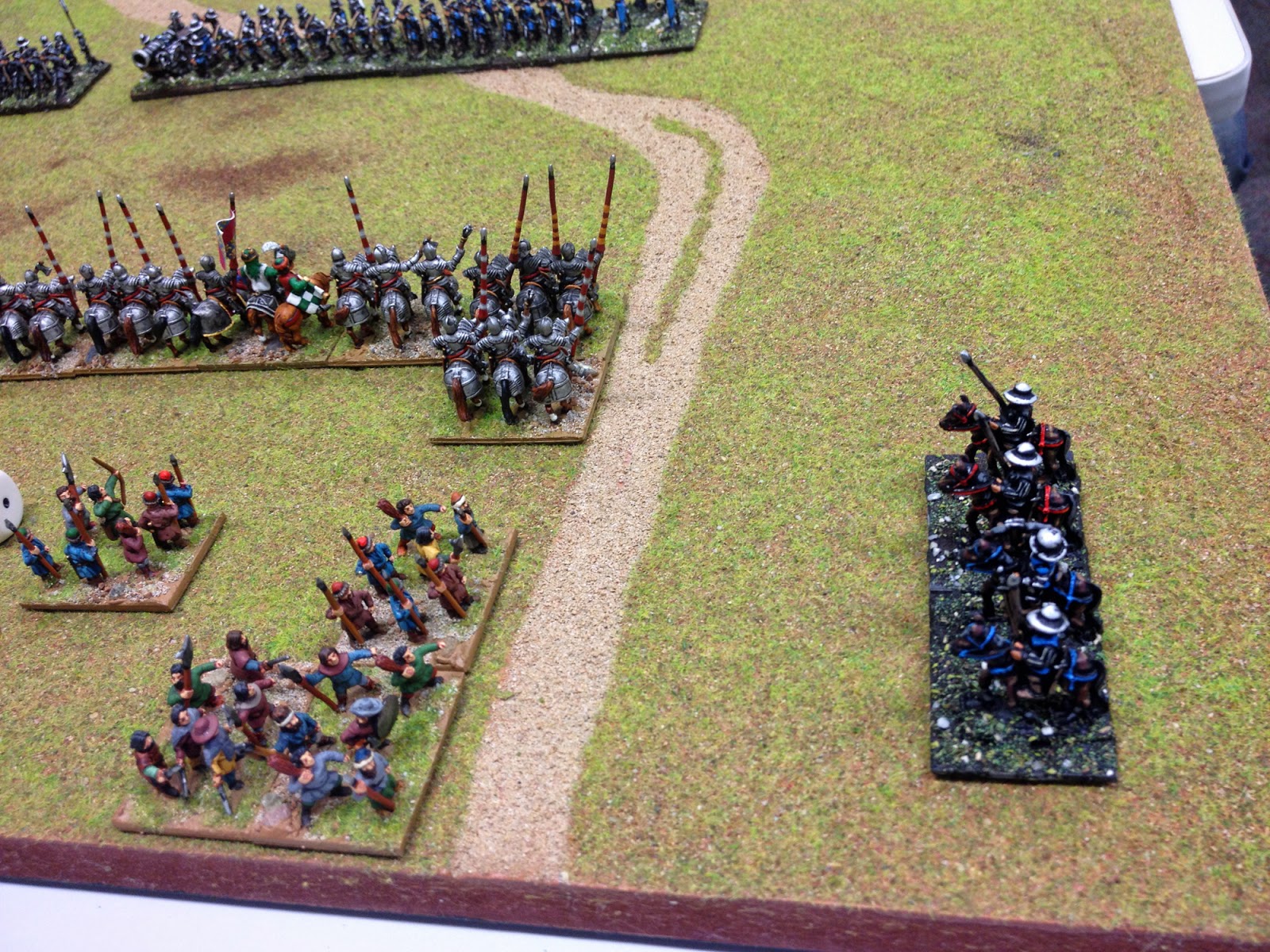 The French knights were supported by heroic peasants and between them they showed the English that their light cavalry were no match for armoured noblemen on horses backed up by a half-starved rabble. 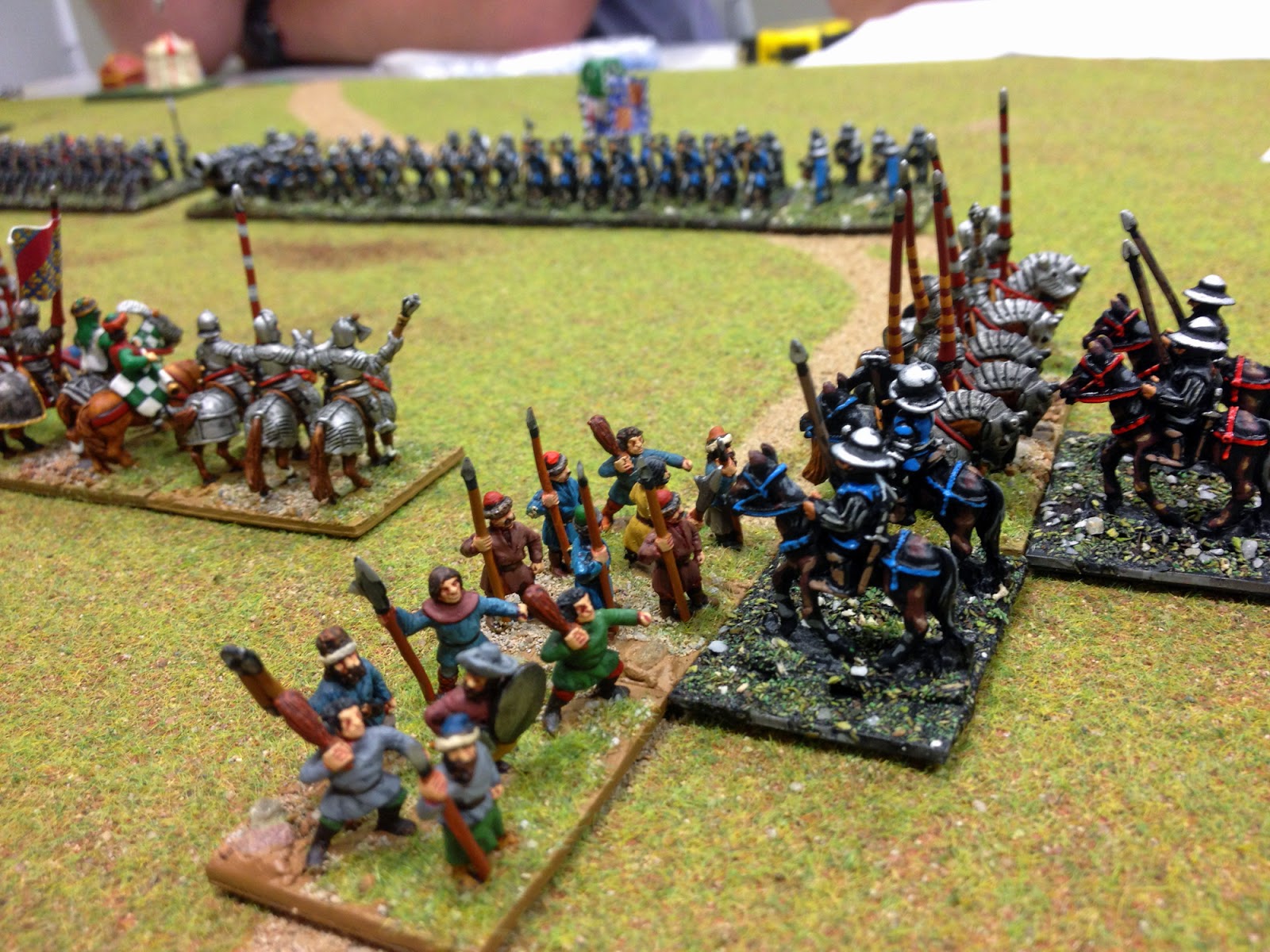 On the other flank Peter was happy, despite the destruction of the English artillery. But the French were closing in. 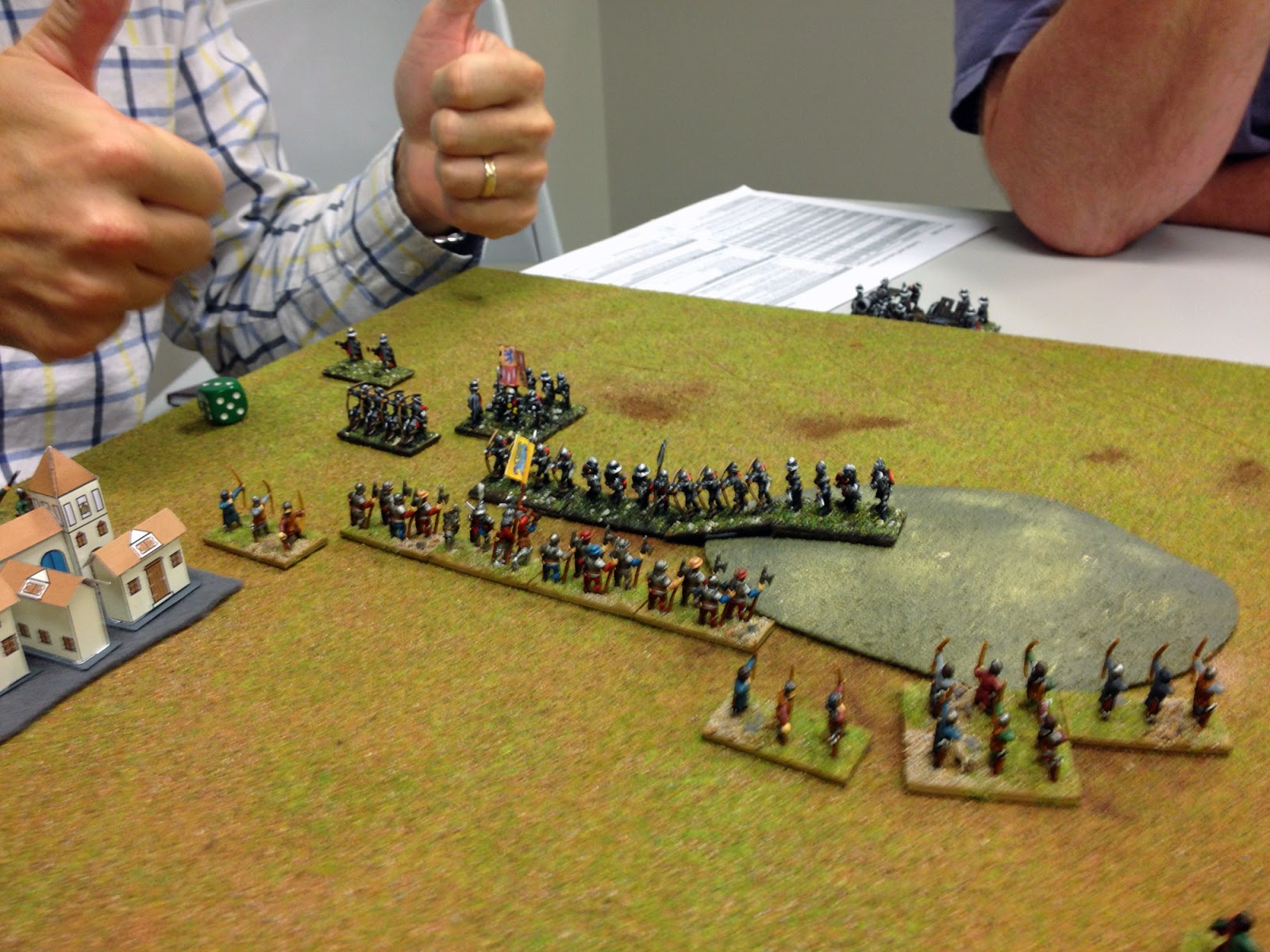 There's a gap in the photos here - everything was too exciting. In the centre the longbows rained pointy death on the French, so their men-at arms were forced to charge forward and get stuck in as quickly as they could. It turned into a bit of a stalemate really. On the French left Gary seemed to be doing OK, and pushed them to breaking point. I wasn't paying attention as to how he did it, because I was trying to bring the French knight to bear on Caesar's wing of the English army before they were all shot down like the dogs the English claimed they were.

Having driven off the light cavalry the French turned on the main English line. Leaving the peasants to face the longbows, the knights shifted to attack the English men-at-arms 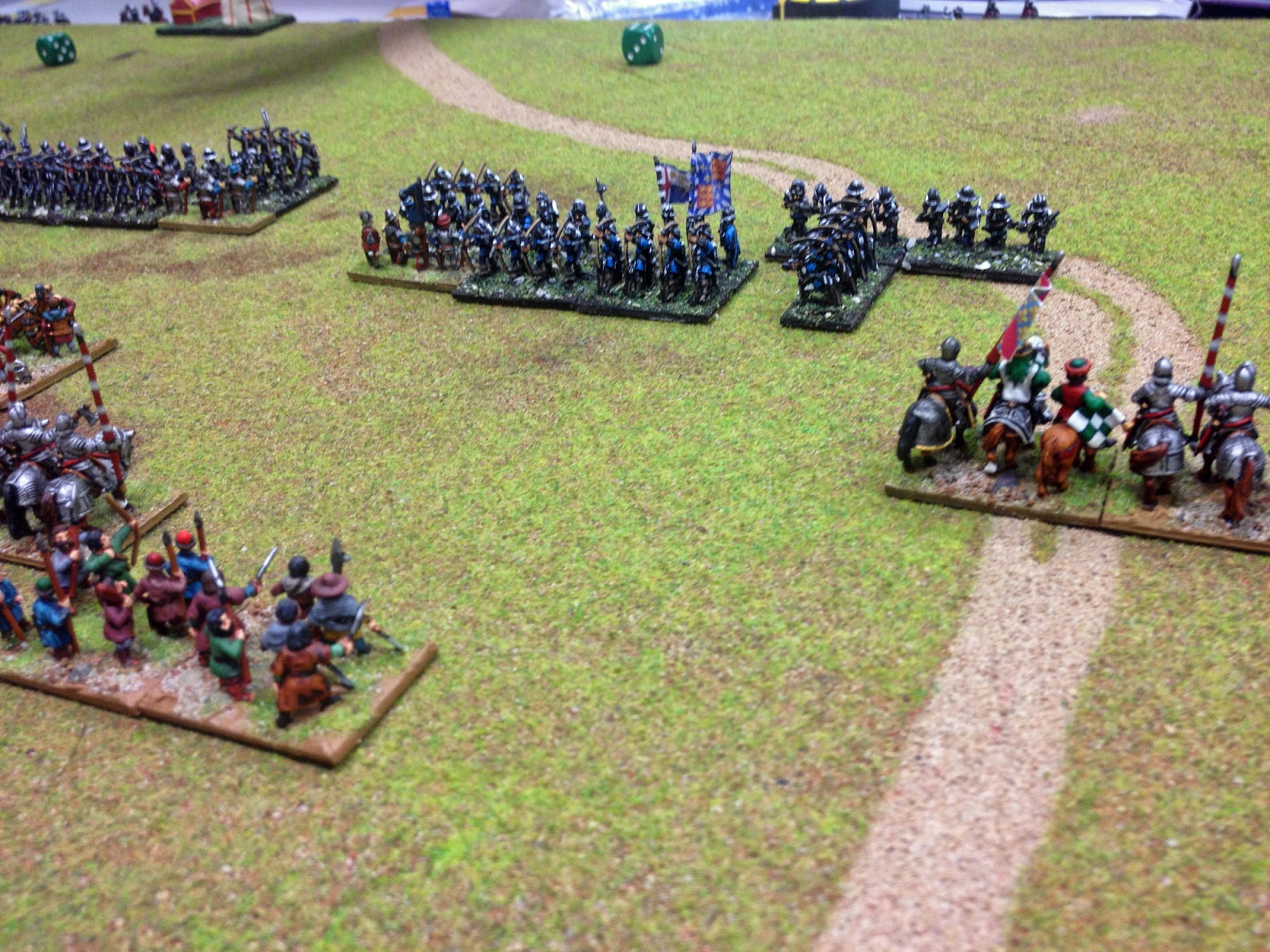 Knights kill Blades in DBA 3.0. But on a draw any Blades defined as Solid, which the English Blades were, destroy the Knights. The French knights went in - and rolled a series of draws. All we had to do was destroy one element of the English army to win - and we lost enough elements to almost push us into defeat.

But it gets worse. The last draw we rolled was our CinC. The French king rode confidently into the weak English men-at-arms and was held to a draw. Death to the King! And the French army defeated ... 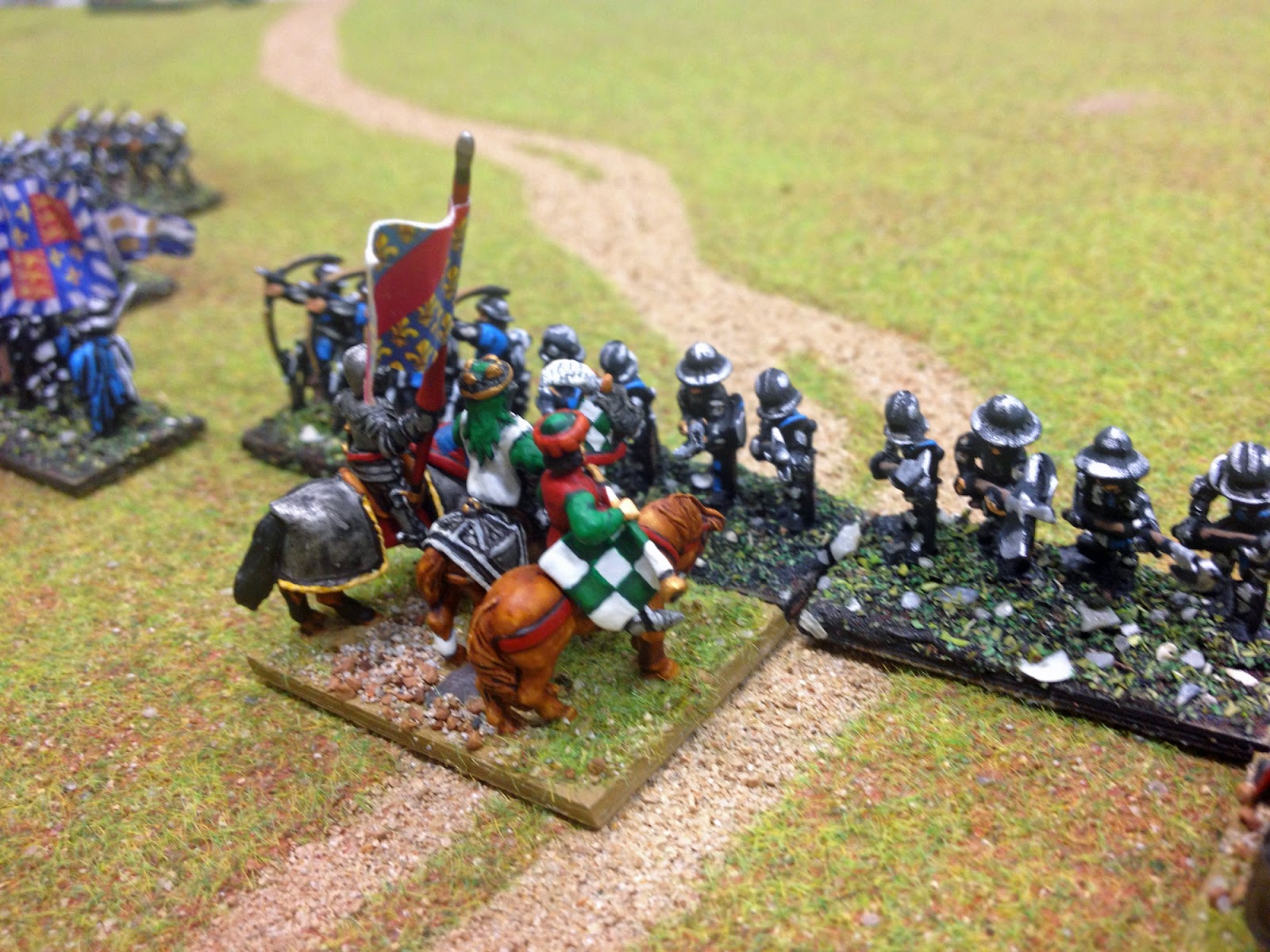 ... But wait! Gary saved the day! He remembered that in a big battle the CinC can, once per game, add one to a combat score after it's been rolled. With a cry of "Je ne suis pas mort!" the king got back onto his horse, ralied the knights and turned a draw into a win to sweep away the English infantry, break their command and, in doing so, break their army. 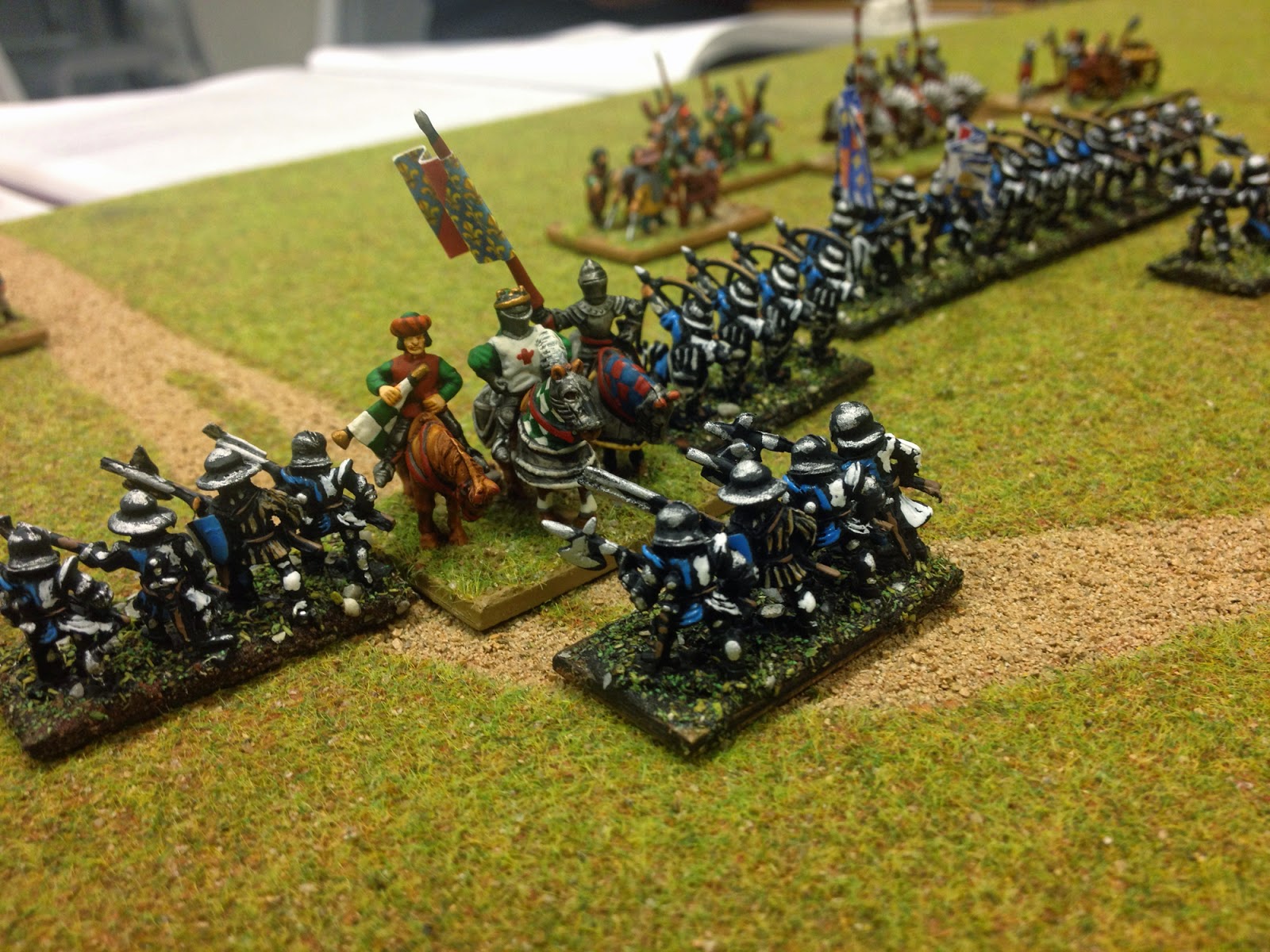 Victory to the French! 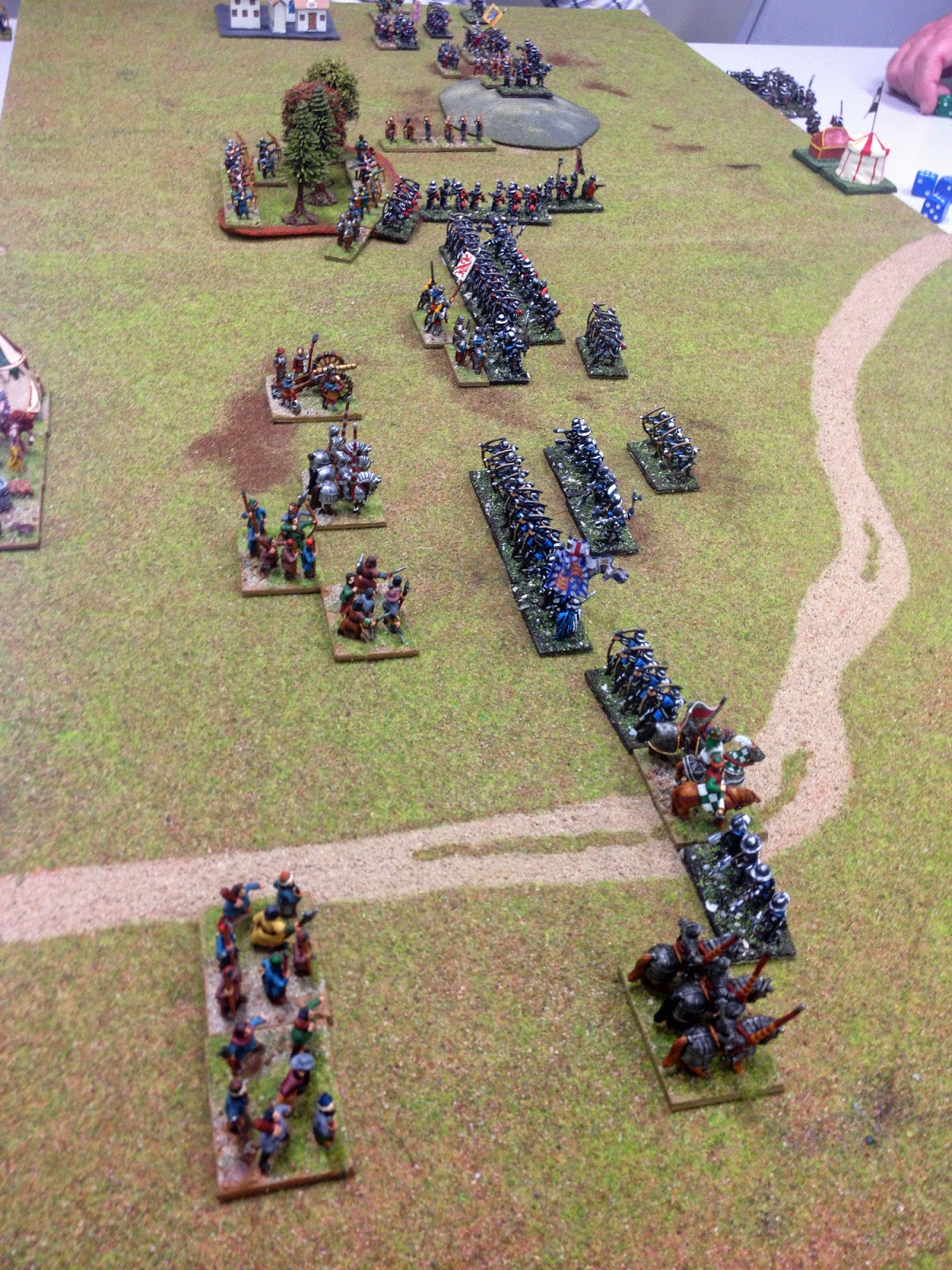 This was an excellent game, interrupted only by has still having to look up some of the fiddly detail. Whilst we play HOTT, none of us were really DBA players but DBA 3.0 has really fired us up; the changes have livened up the game and whilst keeping it the same game as before have also improved it in our view.

Some basic twelve element games were being played elsewhere. This one saw Alexander fighting what I think were Persians. 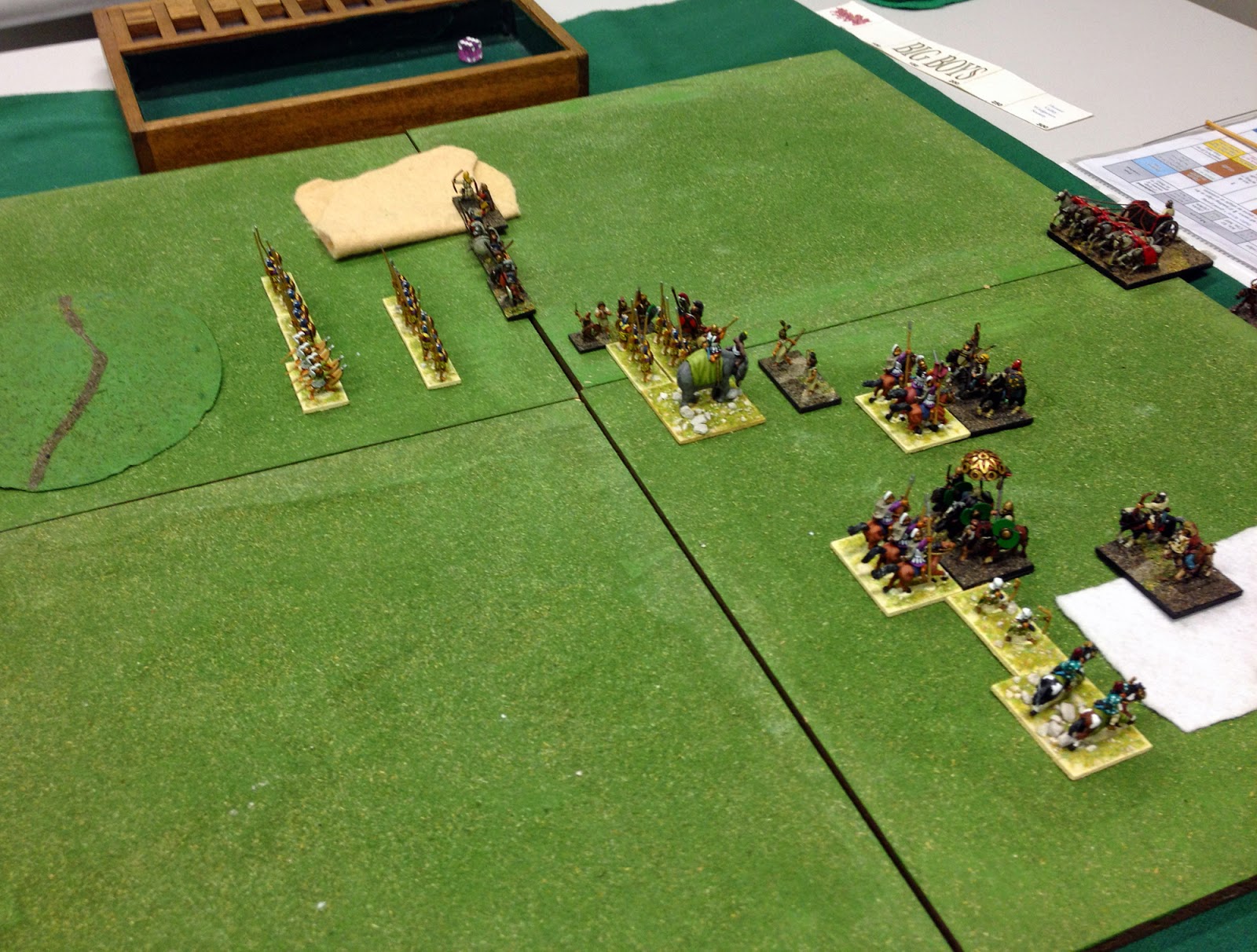 The great man himself. 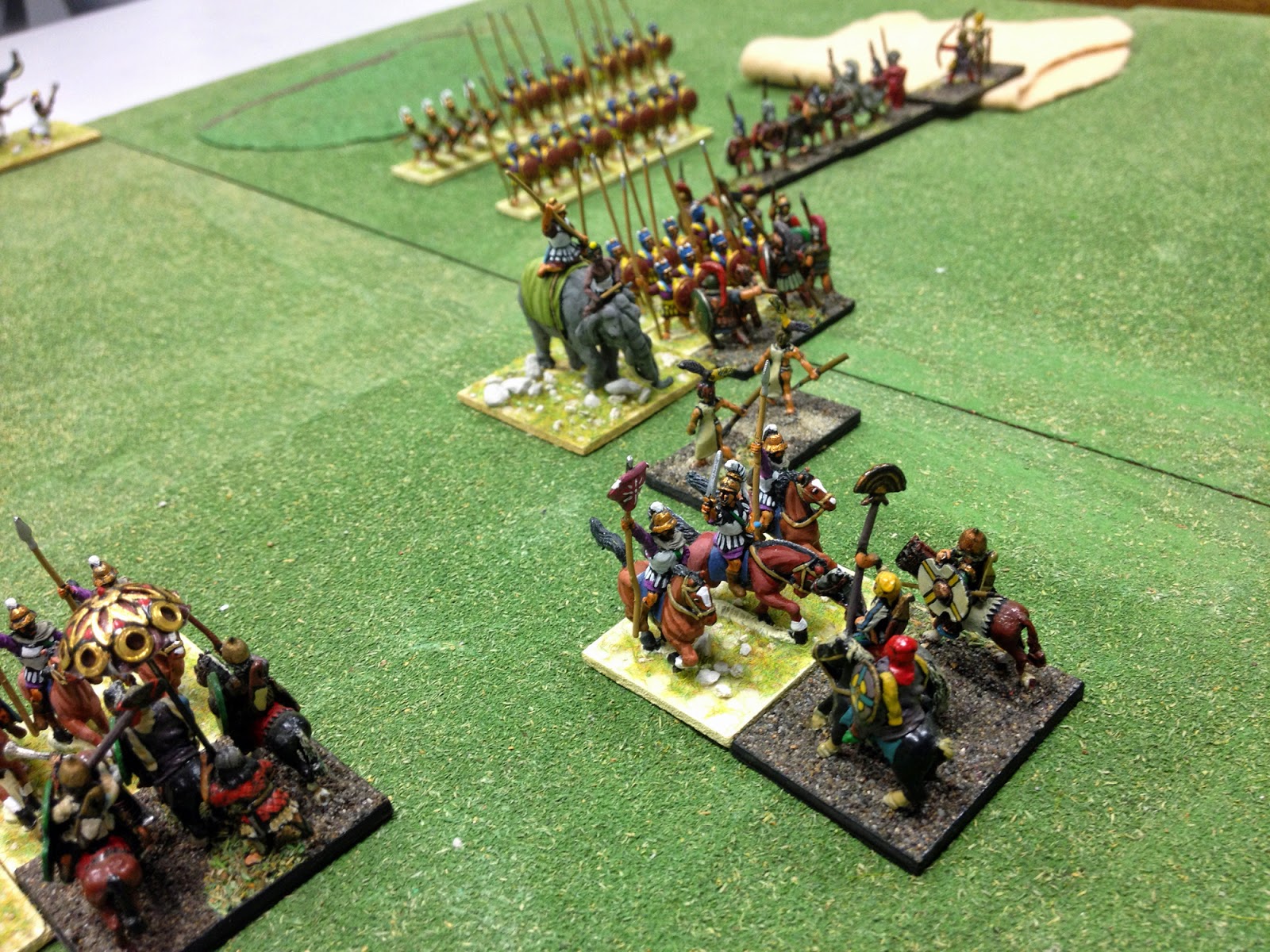 And his opponent, with a fancy umbrella. 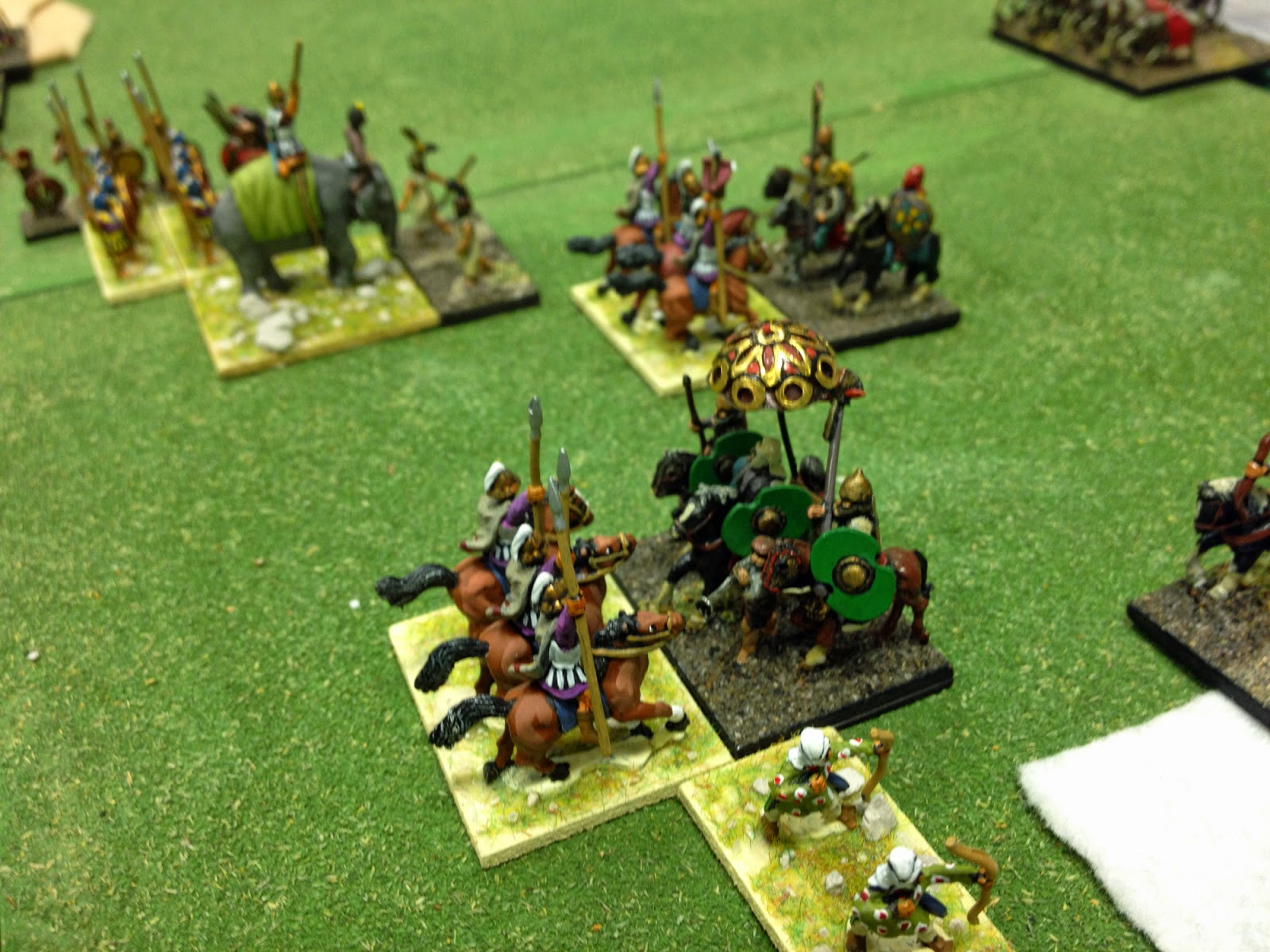