Scenario 5 in 'One-Hour Wargames' sees one side having made a river crossing, and gradually reinforcing it, whilst the other side rushes troops from all points of the compass in order to contest it.

For this scenario I decided to firstly move away from South America and, secondly, try one of the other sets of rules in the book, albeit with some of the modifications I've been applying to the Horse and Musket rules.

I went for the Machine Age rules, which cover 1900 to 1939, with a focus on WW1. And I decided to use my hair-roller WW1 armies. I wanted to field tanks, so I decided to set the game during teh German offensive of March 1918. This allowed me to just about justify the use of German tanks.

As with all of the One-Hour Wargames rules, there are four unit types. In this case they are Infantry, Heavy Infantry, Cavalry and Artillery. The first is obvious. The second represents infantry with extra assets - the author says machine-guns, but it could be elite troops or those that are well-supported with any additional equipment. Cavalry just shoot, and are obviously a bit weak in this era, whilst Artillery represents direct-fire field-guns. Tanks are mentioned as an option, so for this game I decided to have them replace the Cavalry. However the Germans could still only have one unit of Tanks; a second would be Heavy Infantry instead.

I chose to depict Heavy Infantry with an aircraft model, to show their extra support.

Rules changes were as follows:


The latter change is to cover the fact that Tanks are quite good and that heavy Infantry are better than regular Infantry with no real penalty. I like to have a little balance in my games ...

The Germans were attacking, and started with stormtroopers having just made the crossing of a strategic canal. 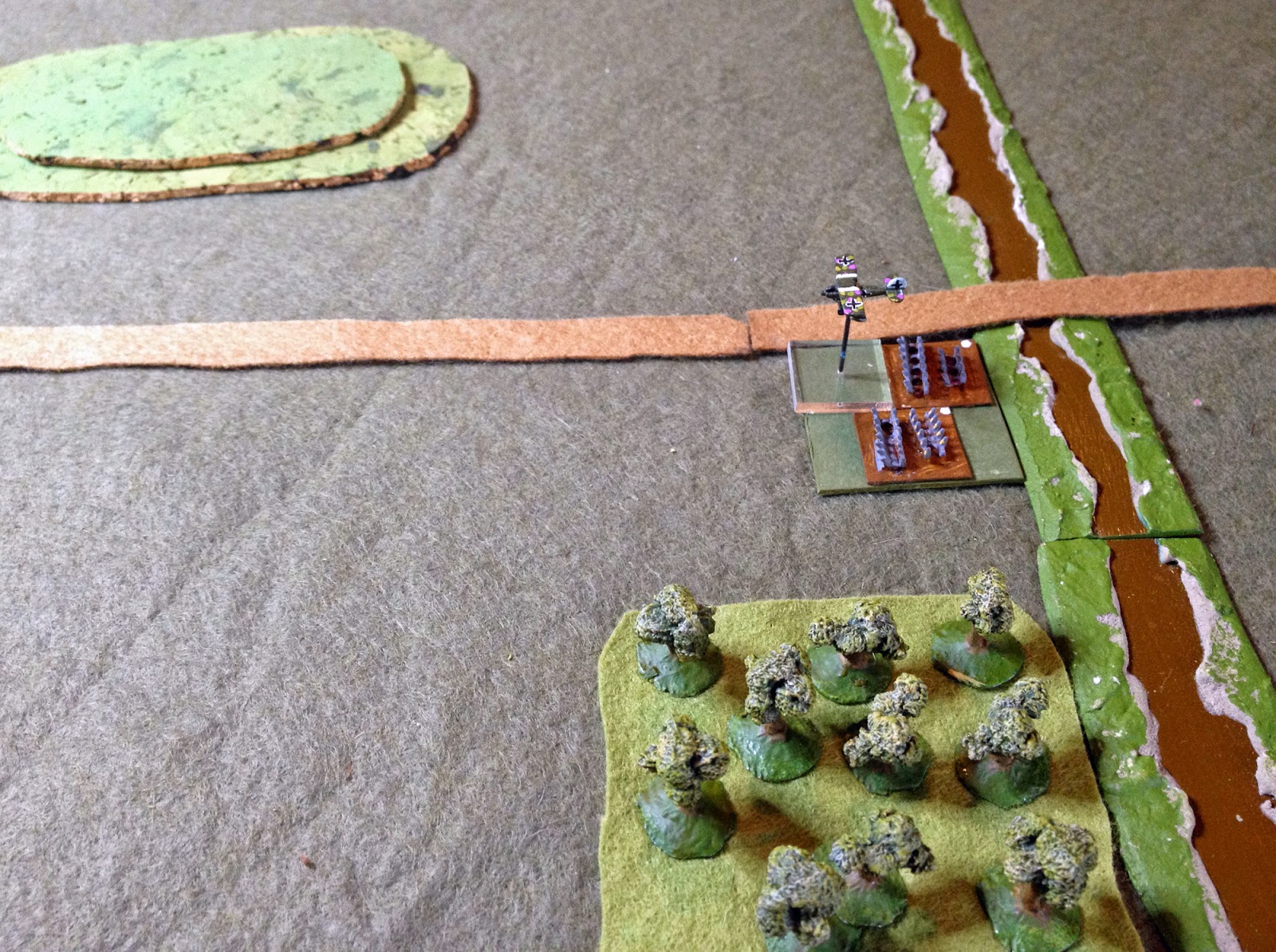 British troops rush to block them; infantry and field-guns appeared on he hill commanding the crossing. The British were lucky with these opening troops and their position, as it put their field guns in a commanding position early on. 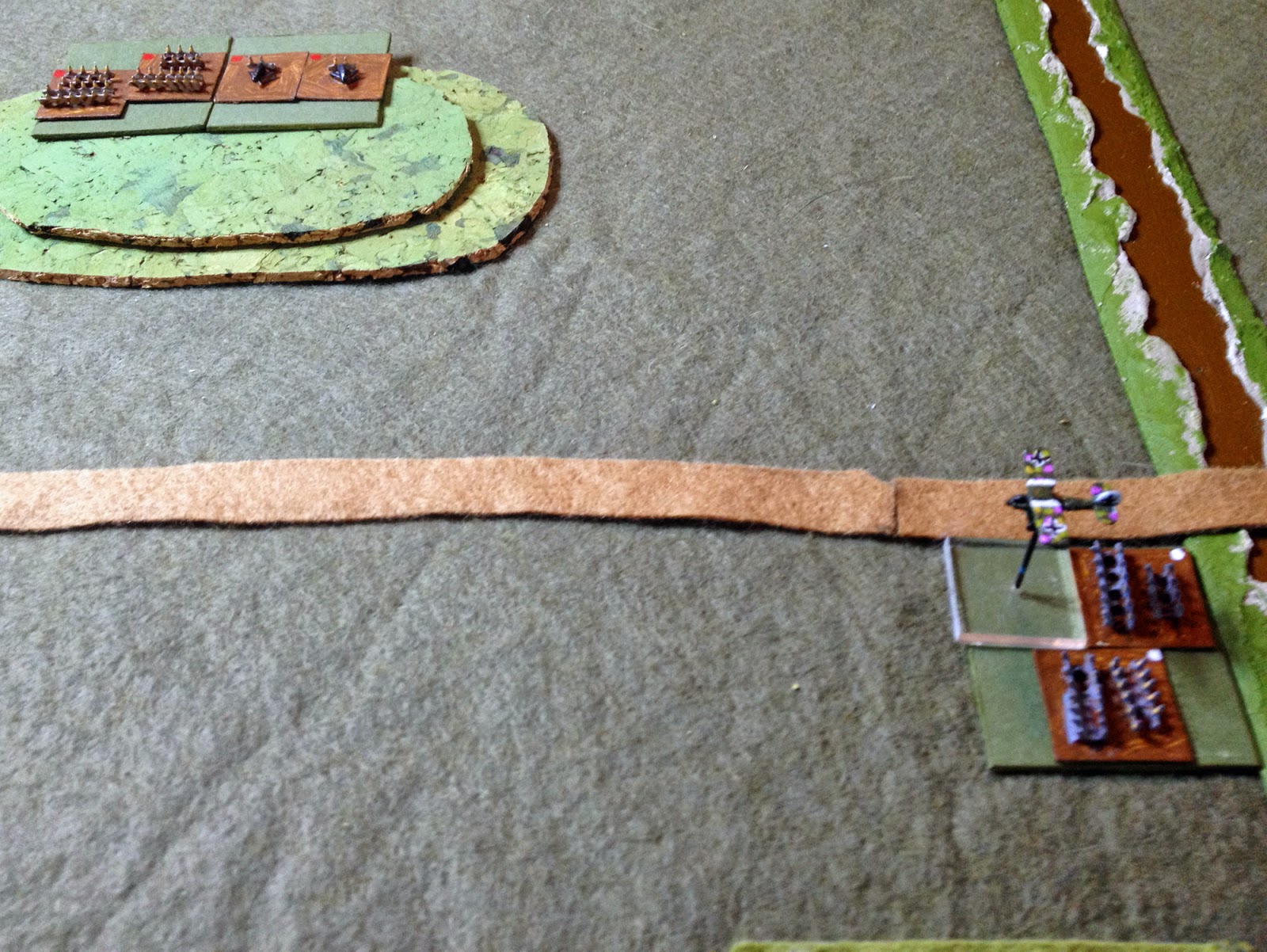 The Germans took cover in the woods, whilst more supported infantry came up to reinforce them. 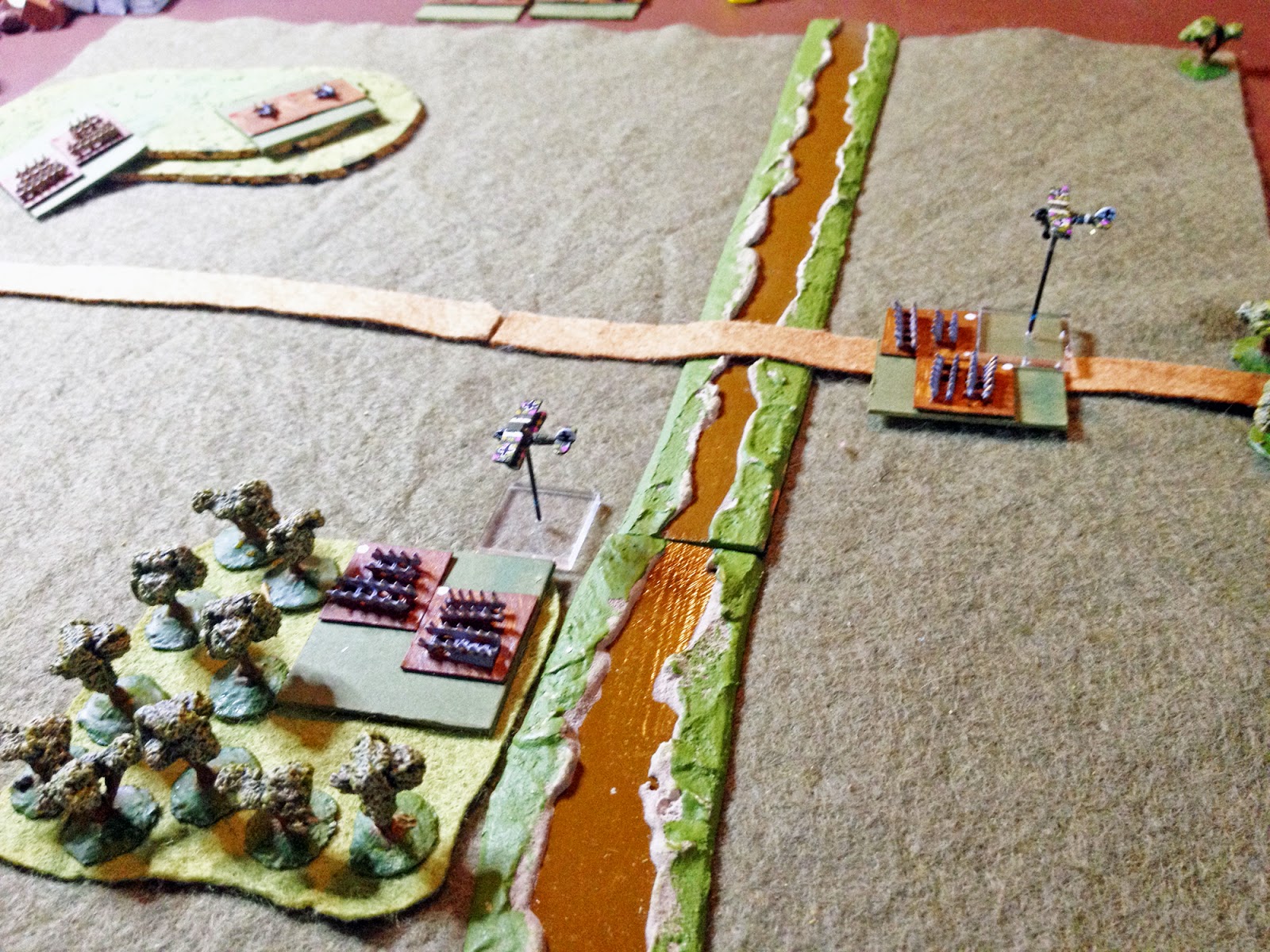 The second batch of British reinforcements appeared - infantry in the rear of the German troops in the wood. 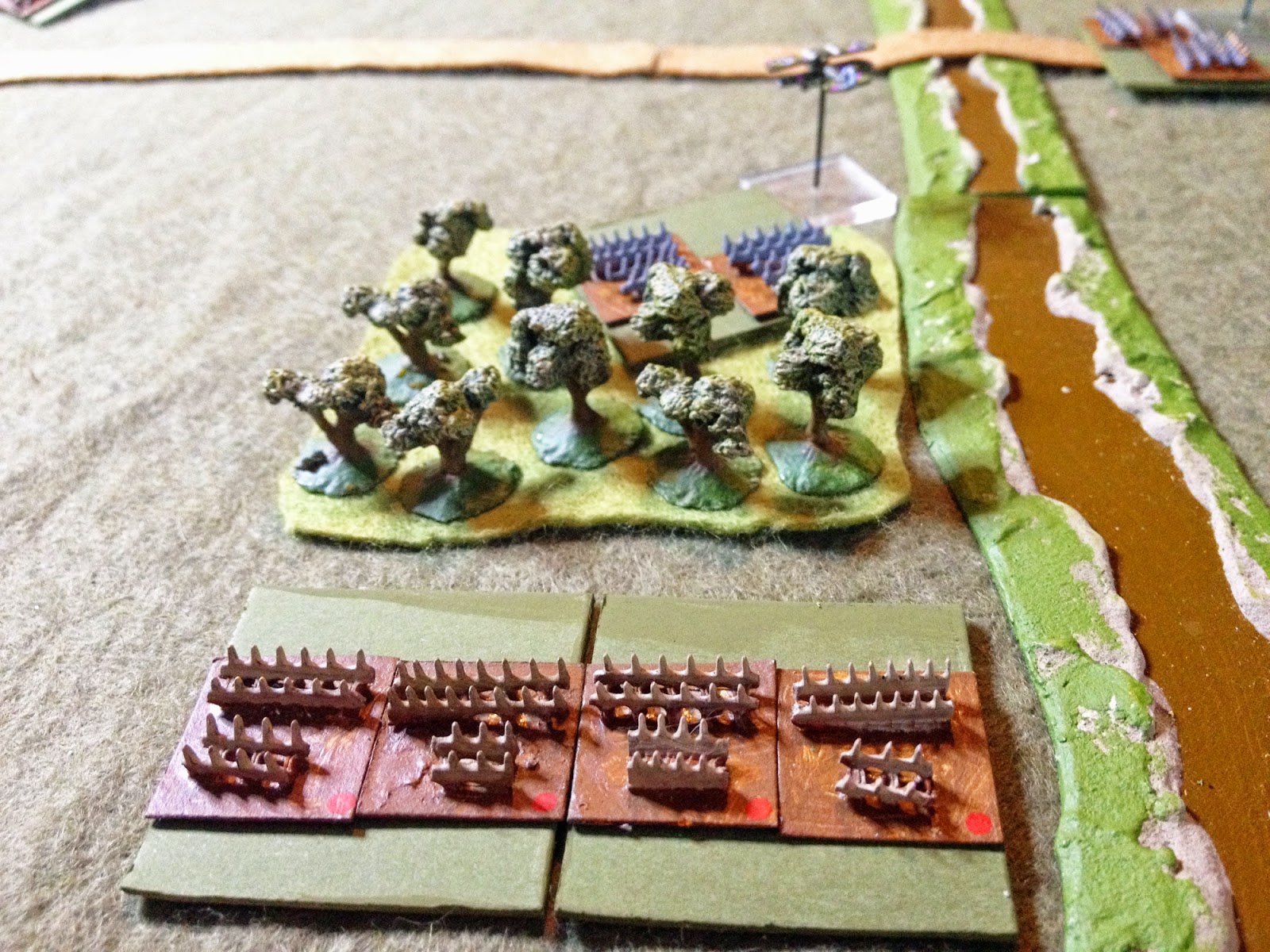 More Germans were pushing along the road, including some A7V tanks. 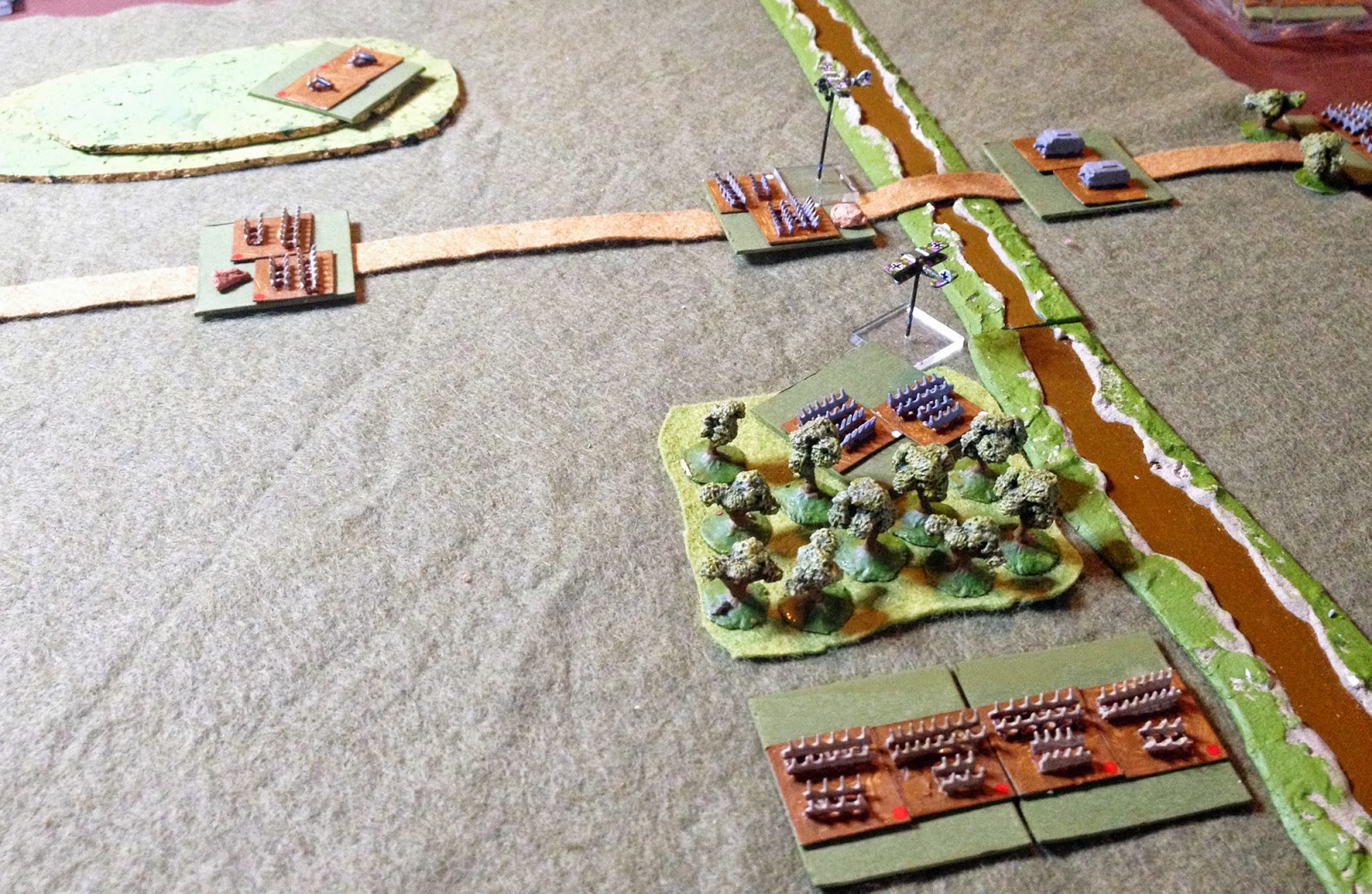 The Germans consolidated their bridgehead, under fire from the field-guns. 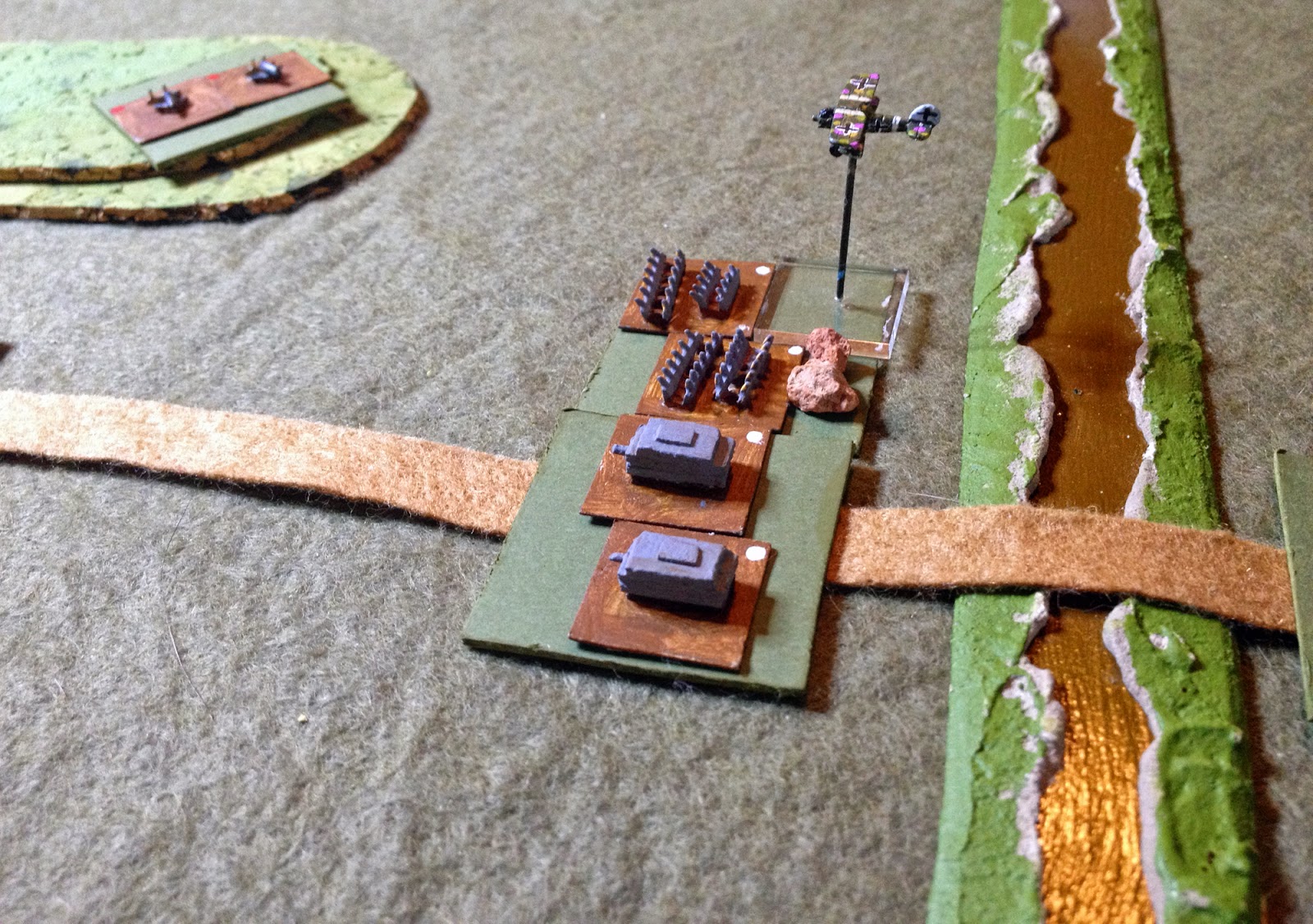 The Germans in the wood turned to face the threat in their rear. They were outnumbered, but had cover and greater firepower. Would it be enough? 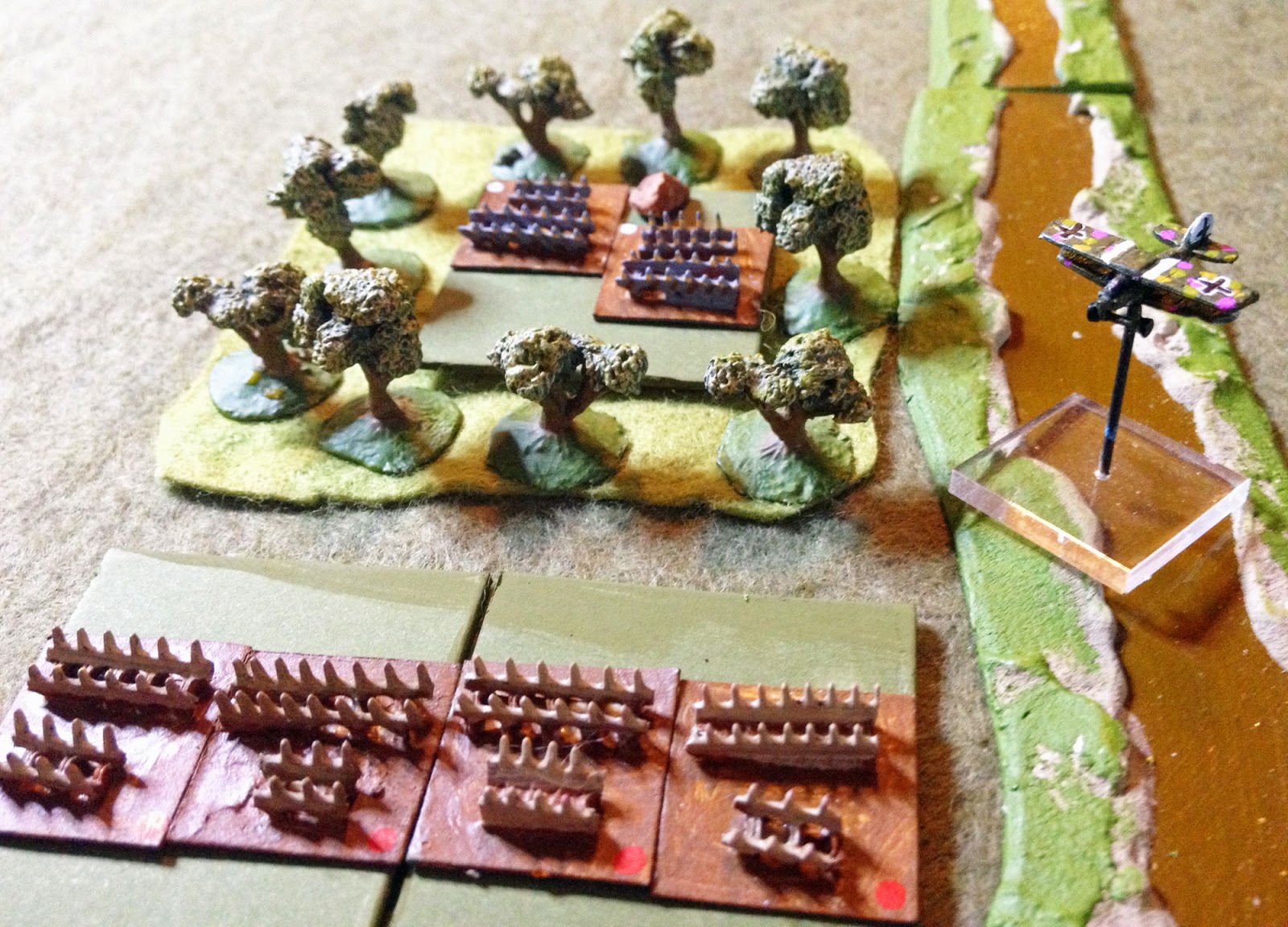 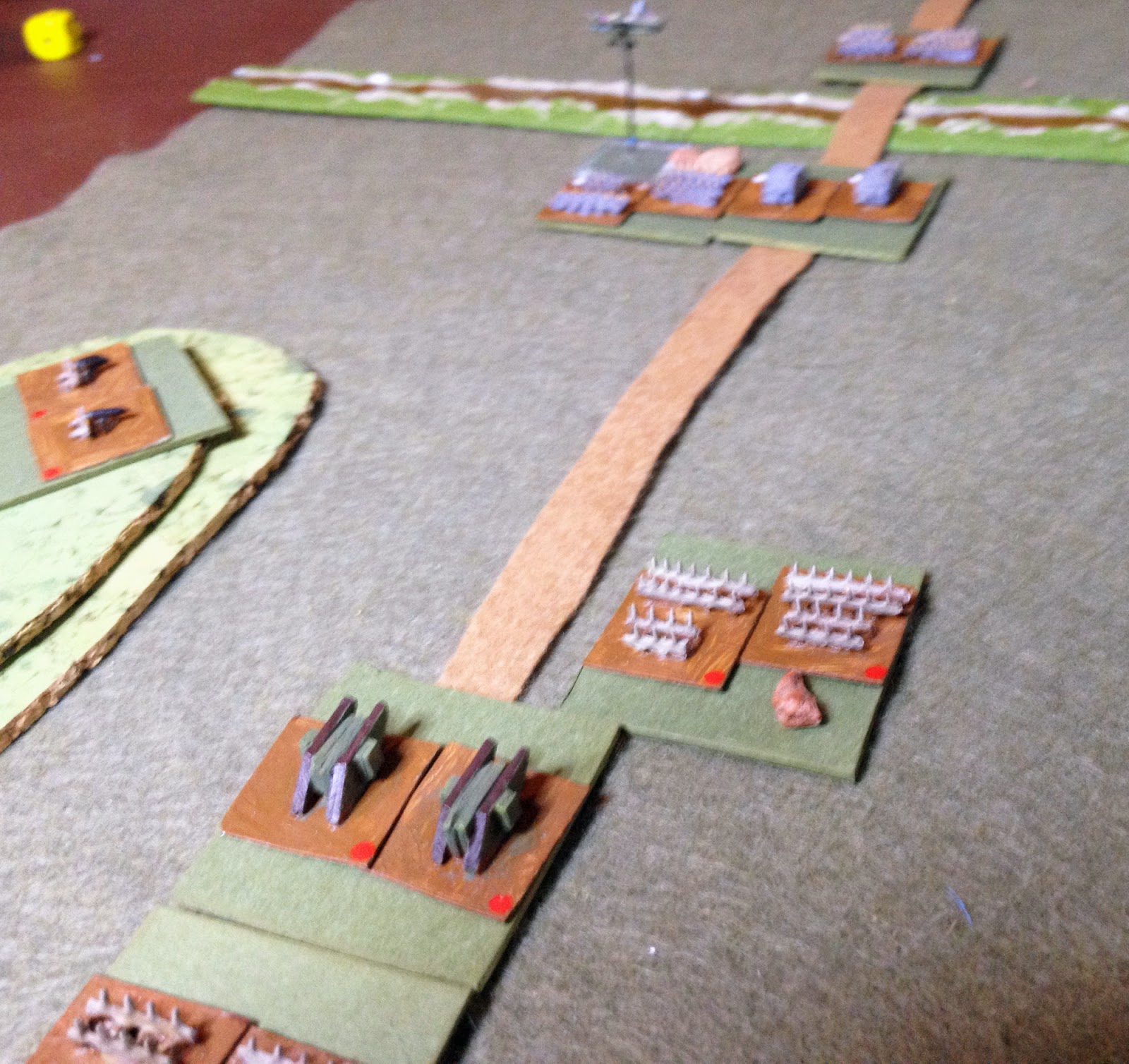 The intial force of British infantry took a right pasting from the Germans, and routed. 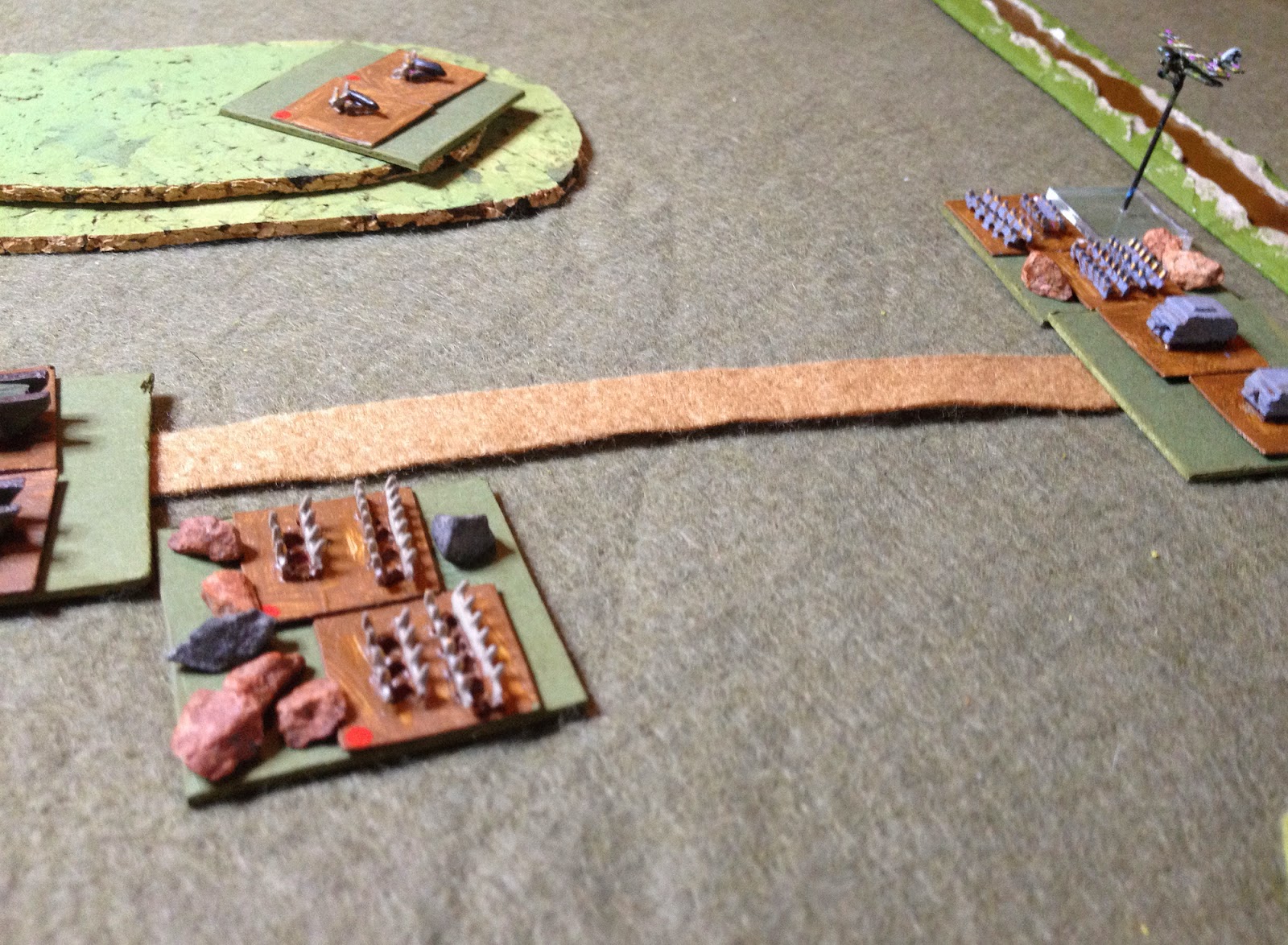 The position about six moves into the game. In the foreground the Germans were defending the wood, whilst one of their infantry units moved up in support on the other side of the canal. Meanwhile the tanks engaged each other, those of the British supported by their field-guns whilst the Germans still laid down heavy fire from their supported infantry. 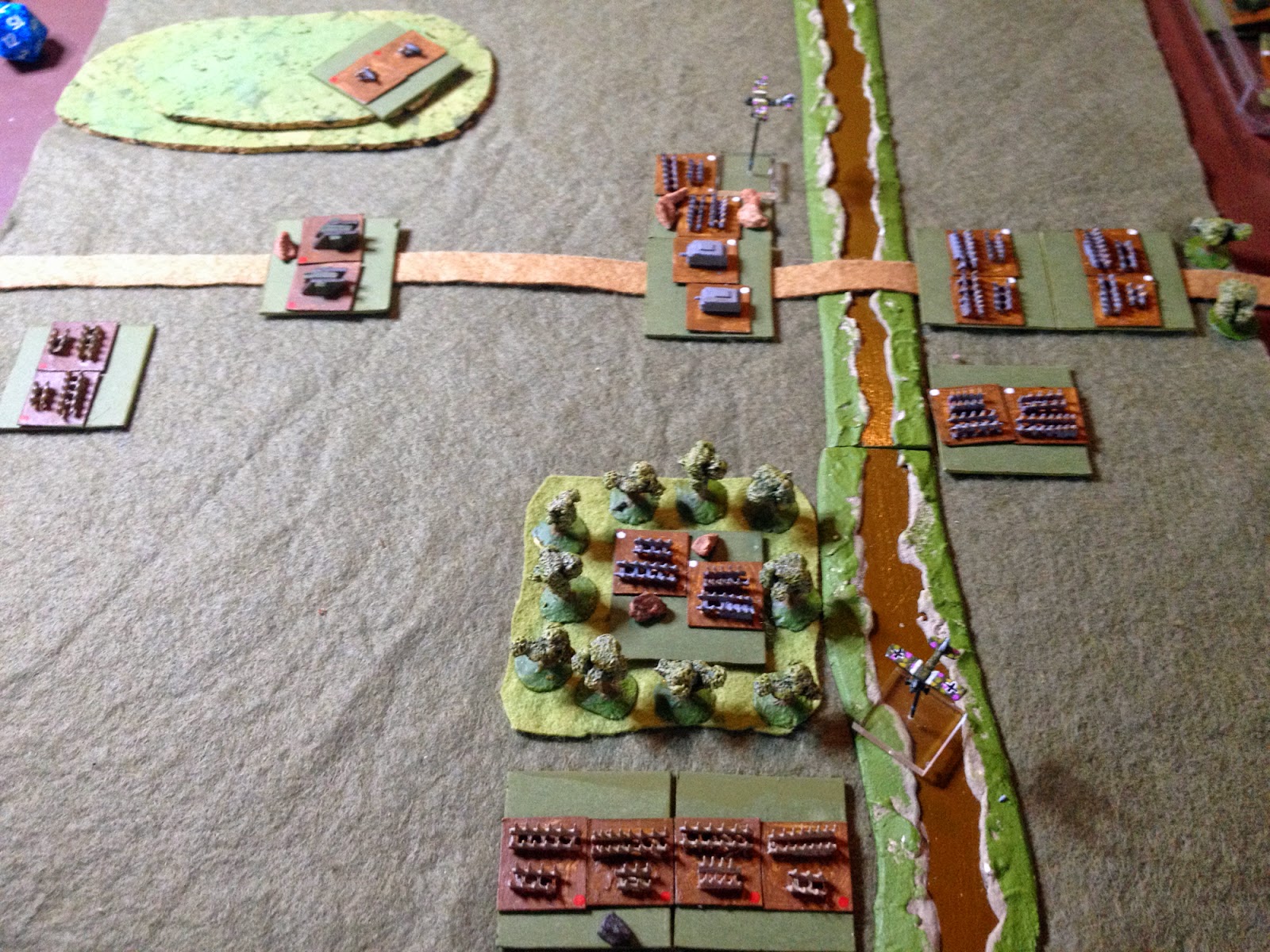 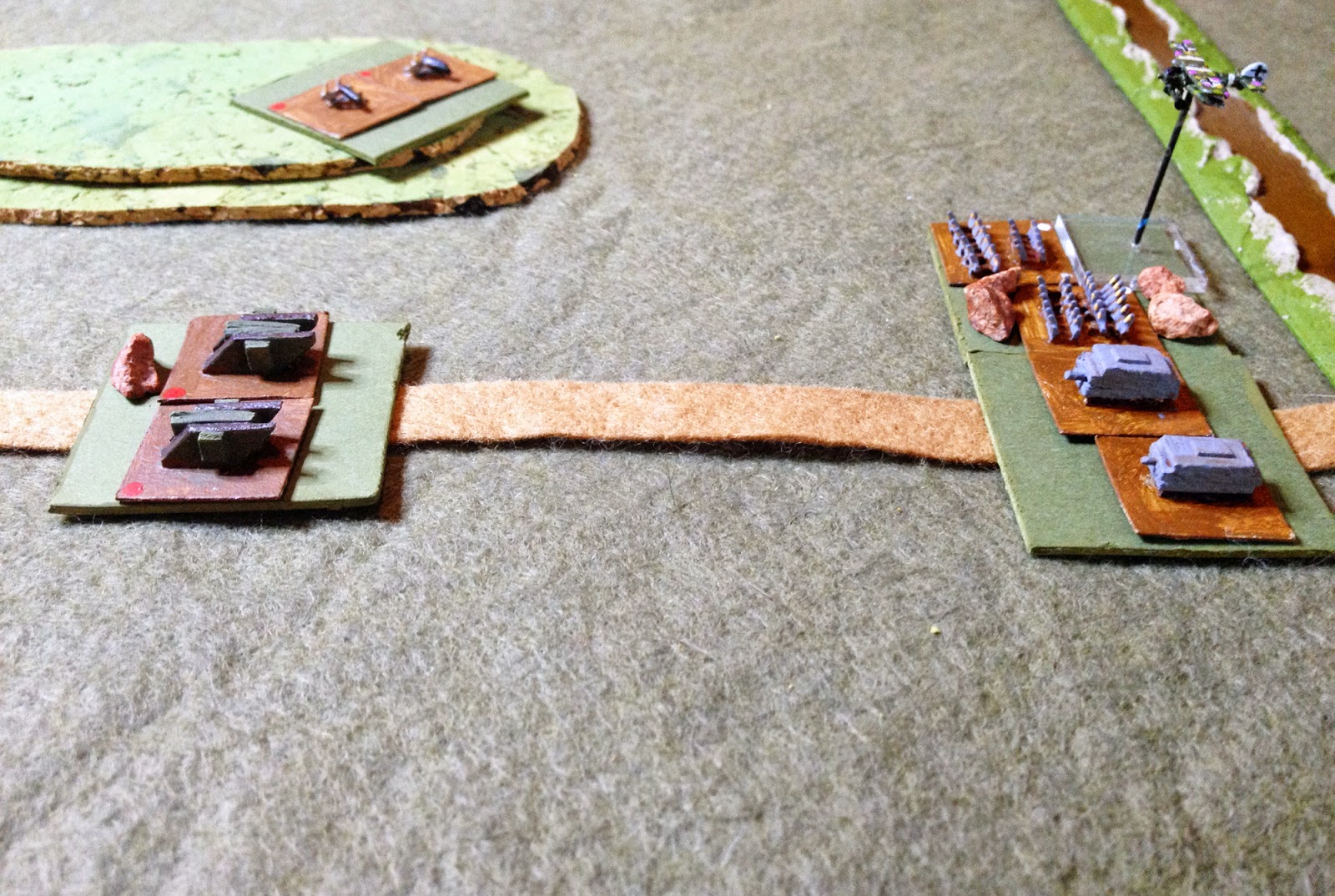 The field-guns did their job, and the German infantry routed. 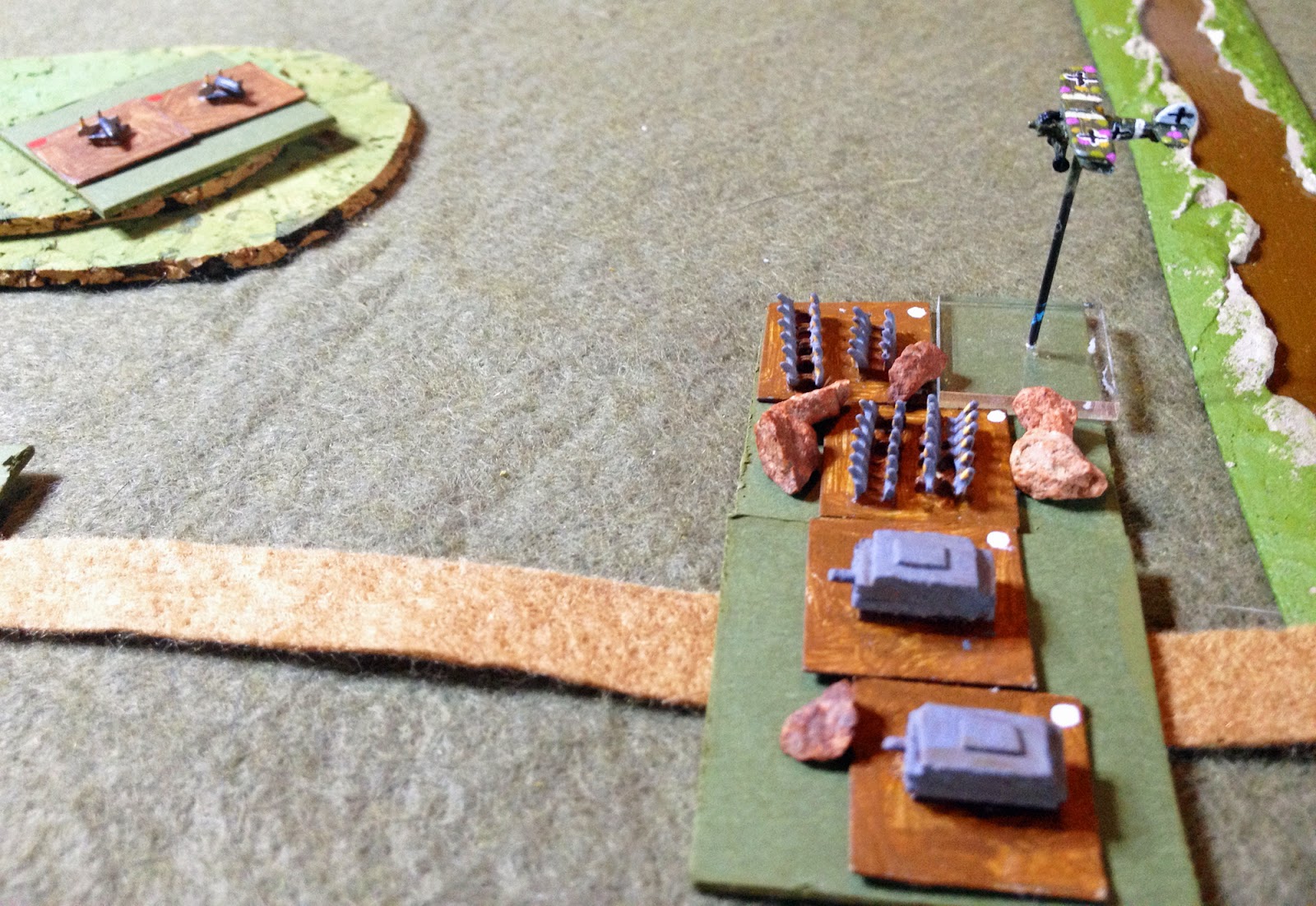 The British attack on the woods was successful as well, and the Germans retreated there. 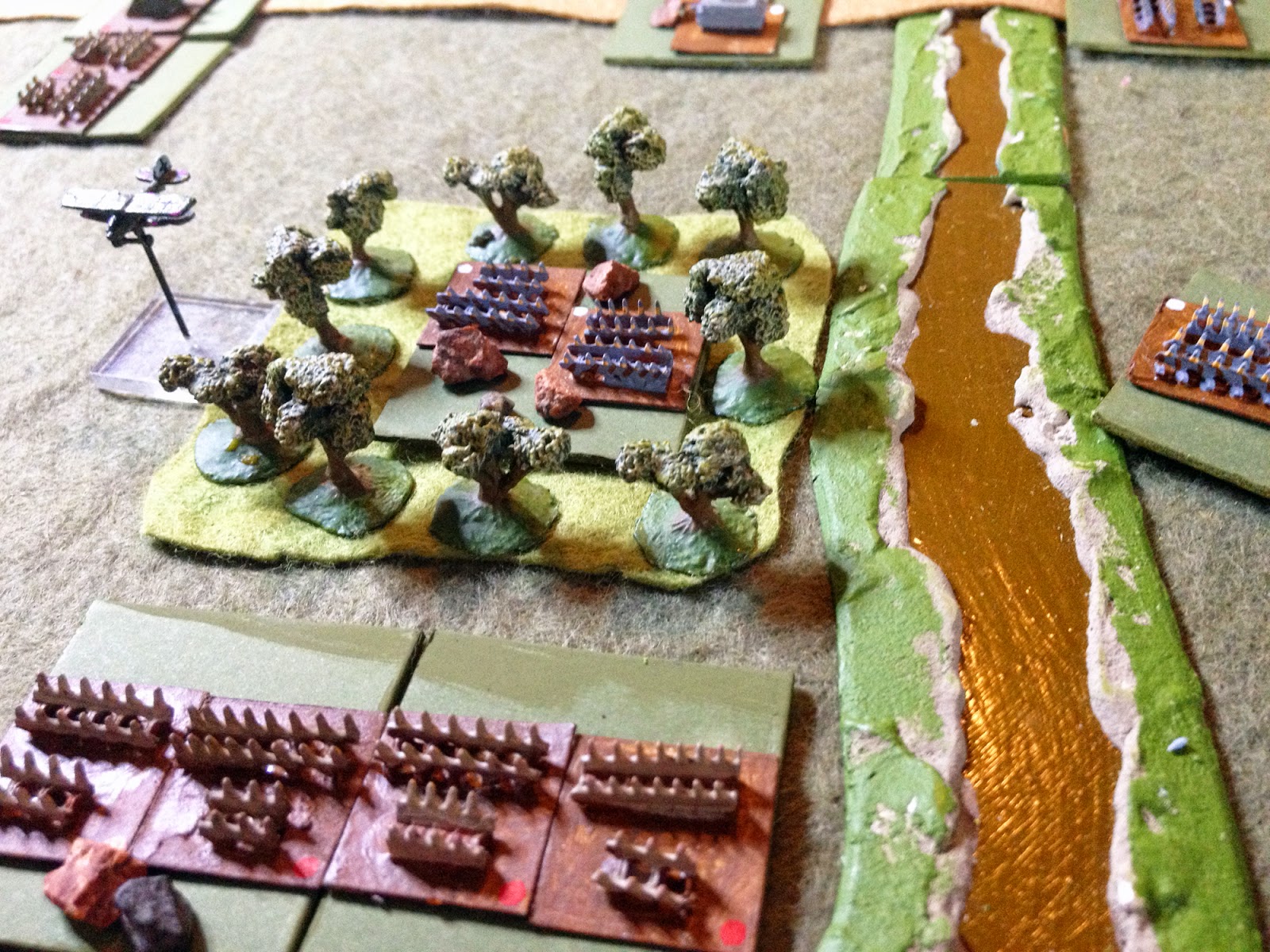 The British now controlled the wood. This gave them troops in cover within range of the crossing, which would prevent a German victory. At the same time another German infantry unit was lost defending the bridge. 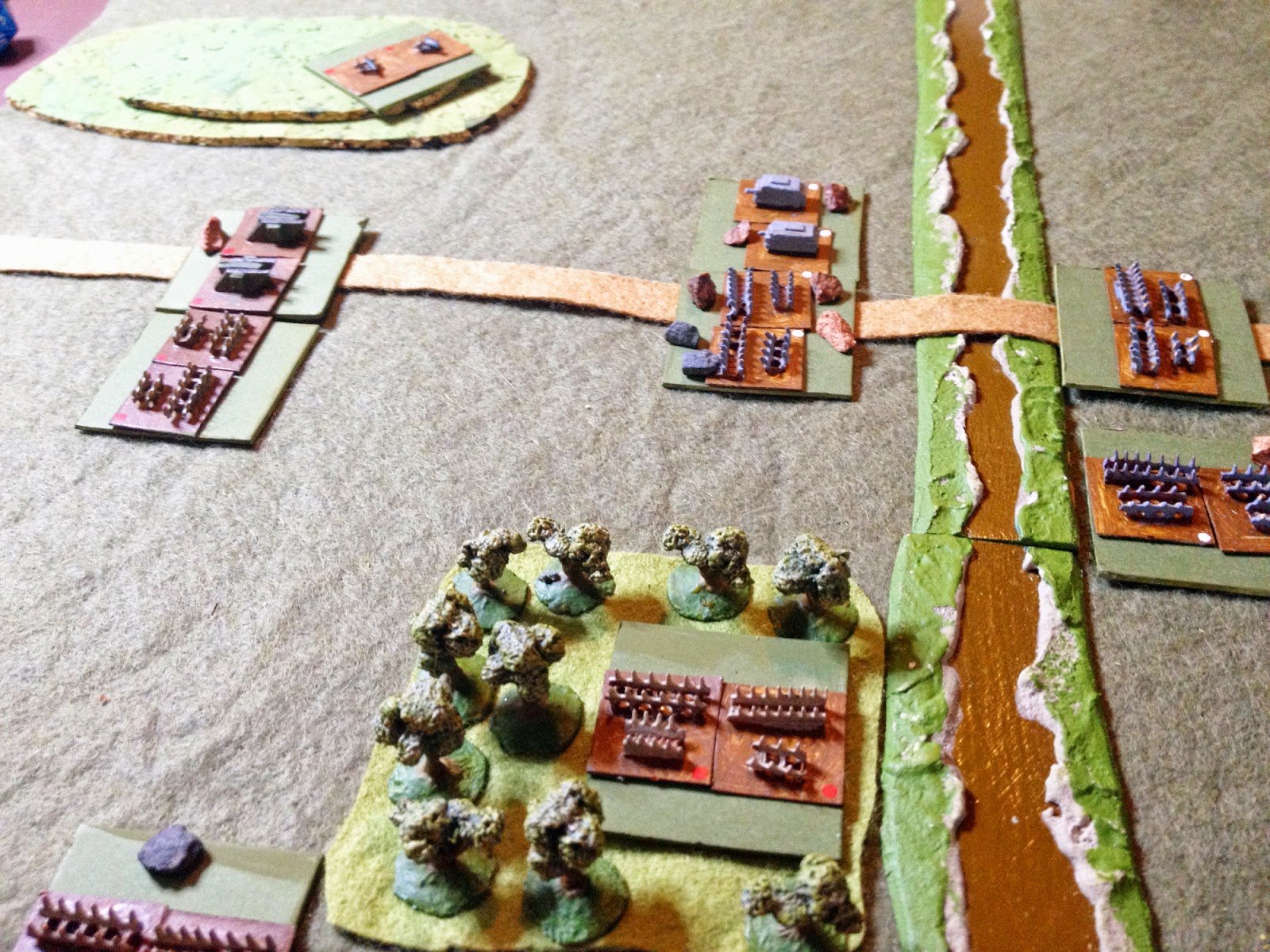 Both sides continued to trade fire. The British tanks were all destroyed or immobilised. 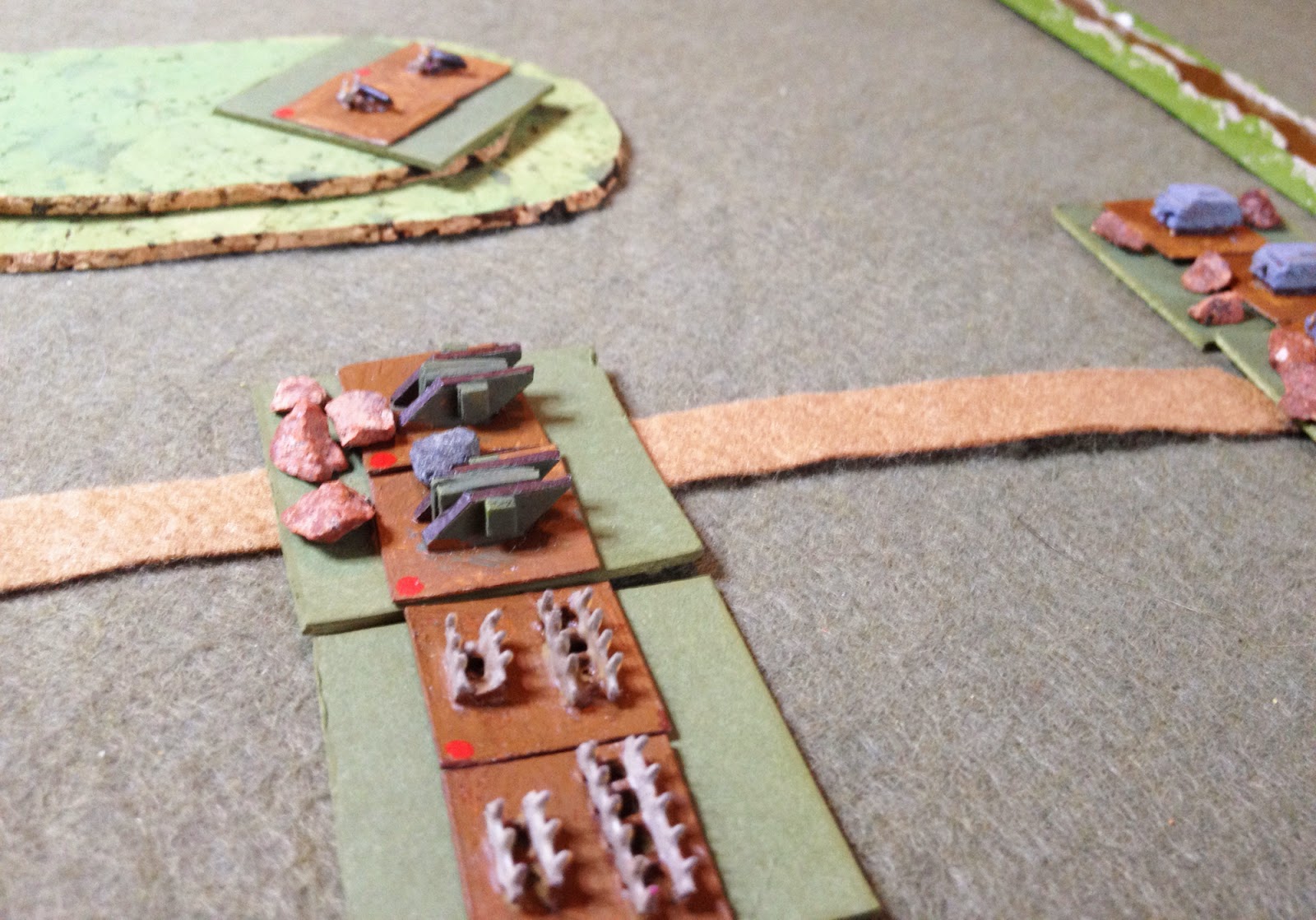 Heavy fire from the British infantry, however, made the position of the German infantry near the bridge untenable, and another unit was lost ... 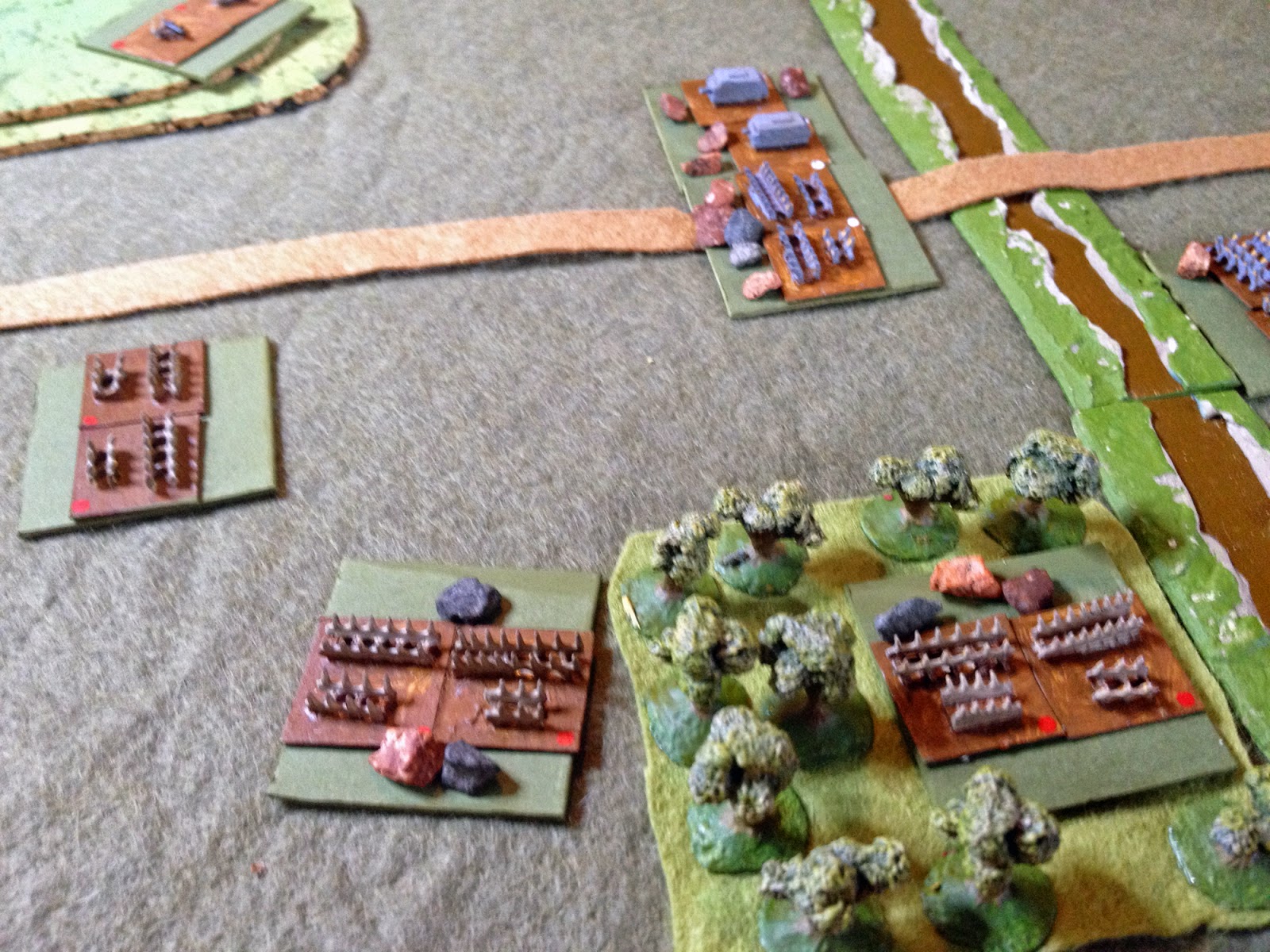 ... whilst the field-guns finished off the German tanks. 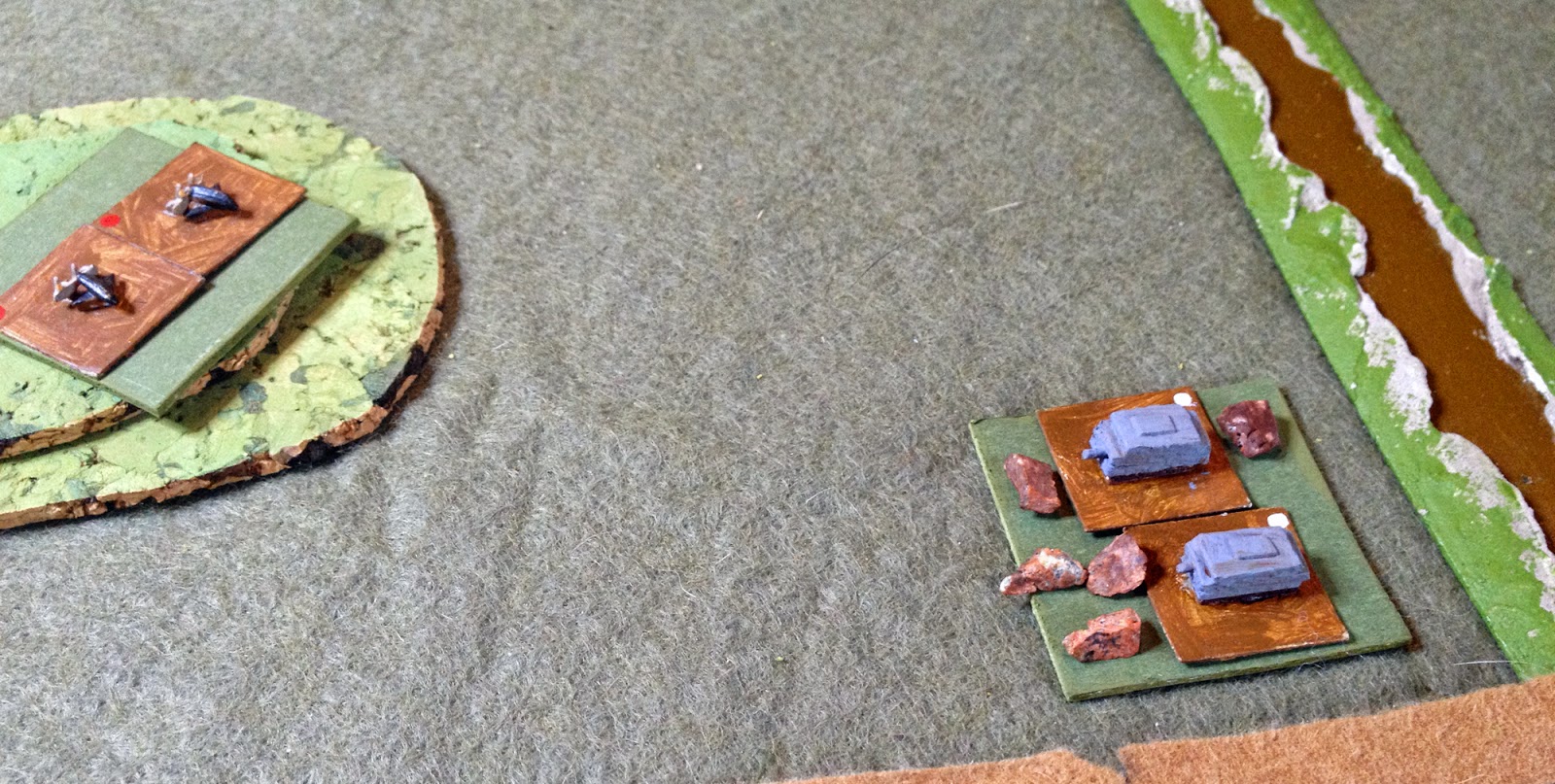 The British were now in a strong position, with a ring of fire surrounding the bridgehead, and the Germans only having one unit to push into it. 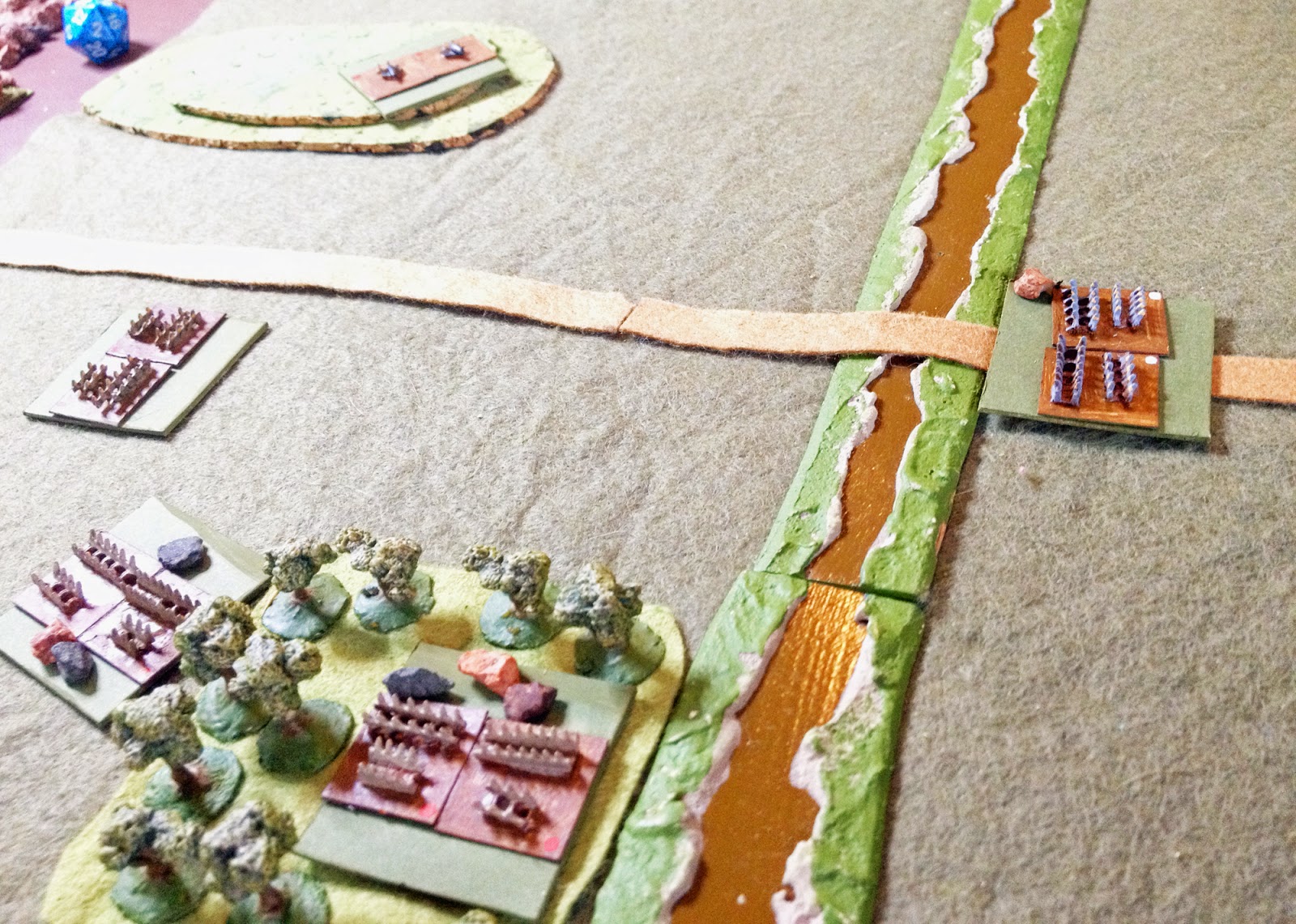 However night was falling - this was the last turn of the game. Even a single German unit on the British side of the river would contest the crossing and force a draw. The Germans crossed. 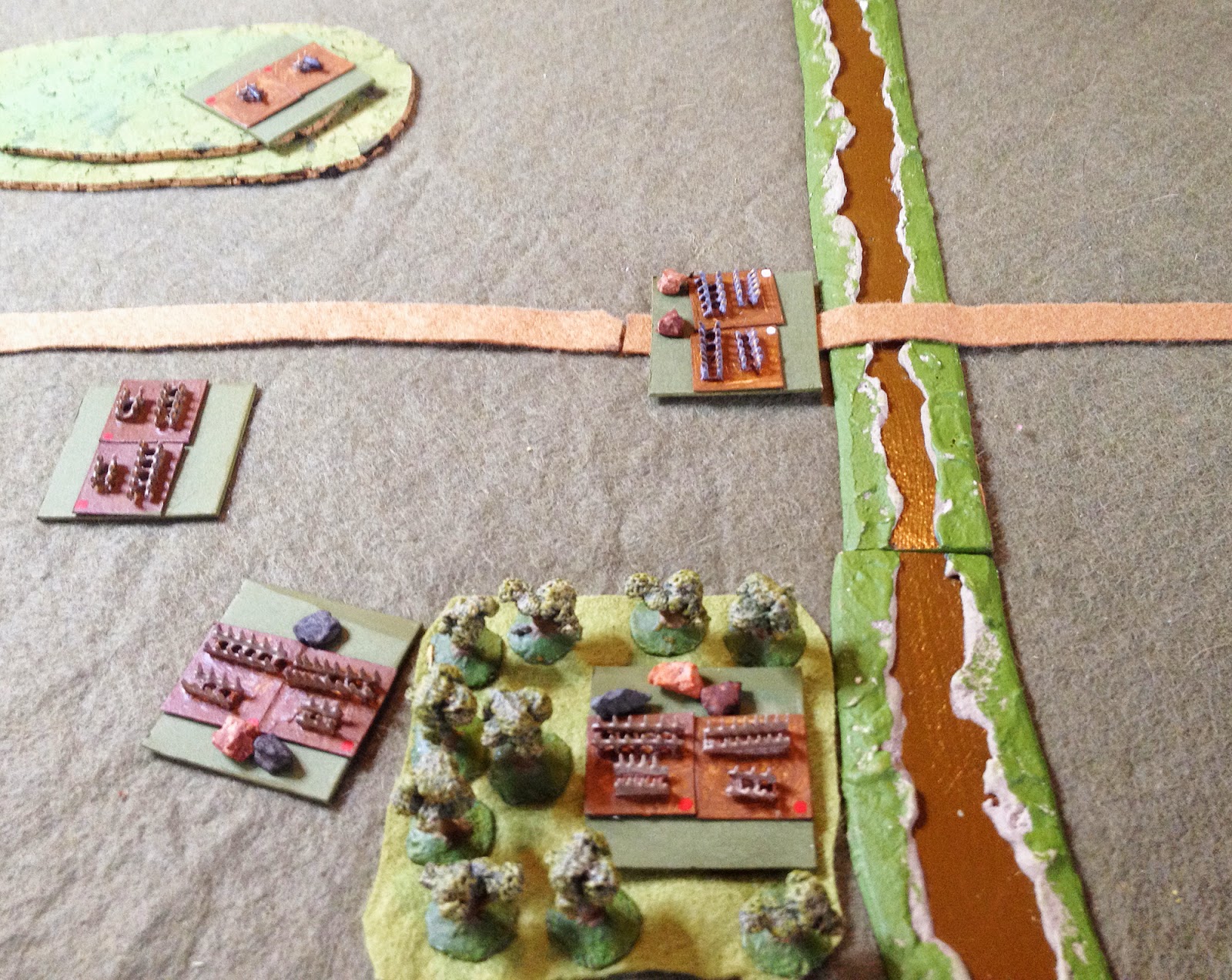 So the fight ended in a draw, although the Germans had taken far more casualties. The tanks proved very resilient, but stars of the show were the British field-guns, which steadily dished out casualties throughout the game, and the British infantry assaulting the woods, who achieved their aim more quickly than expected and therefore prevented the Germans from consolidating their bridgehead.

Whilst I wasn't particularly overwhelmed with this particular set of rules - I found them somewhat lacking in flavour - I'll probably give them another go sometime.

Follow the rest of the scenario refights HERE
Posted by Kaptain Kobold at 19:24