Following on from a game of 'Maurice last week, Caesar and I tried 'Twilight of the Sun-King' last night. Although I'd played a version of the original 2001 rules, neither Caesar or I had tried the 2010 v1.1 edition, so we assumed we'd be in for a slow, but interesting, learning experience.

I set up a scenario based on the Surprise Attack in 'One-Hour Wargames', itself based on Quatre Bras, but rejigged it to more closely represent the Great Northern War battle of Lesnaya. However we made the table too large so that, combined with some altered forces, we got a completely different battle of our own, inadvertent, devising.

The Swedes started with a third of their force - four units - defending the gap between two woods. The Russians got to bring on a third of their force - also four units - on the first turn, with the other two-thirds probably arriving over the next couple of turns; all reinforcements entered based on a die roll. Some of the Swedish reinforcements would come on fairly early, whilst the others would be delayed until well over halfway through the battle. The Russian objective was to capture the village in 15 turns, with breaking the Swedish army being a minor victory. The Swedes had to hold out - breaking the Russian army would be a bonus.

Caesar took the Swedes, and the first Russian troops entered the table. It was at this point we realised that the table - 4' x 4' - was probably a bit large for the game. But we decided to persevere and just see how it played out. 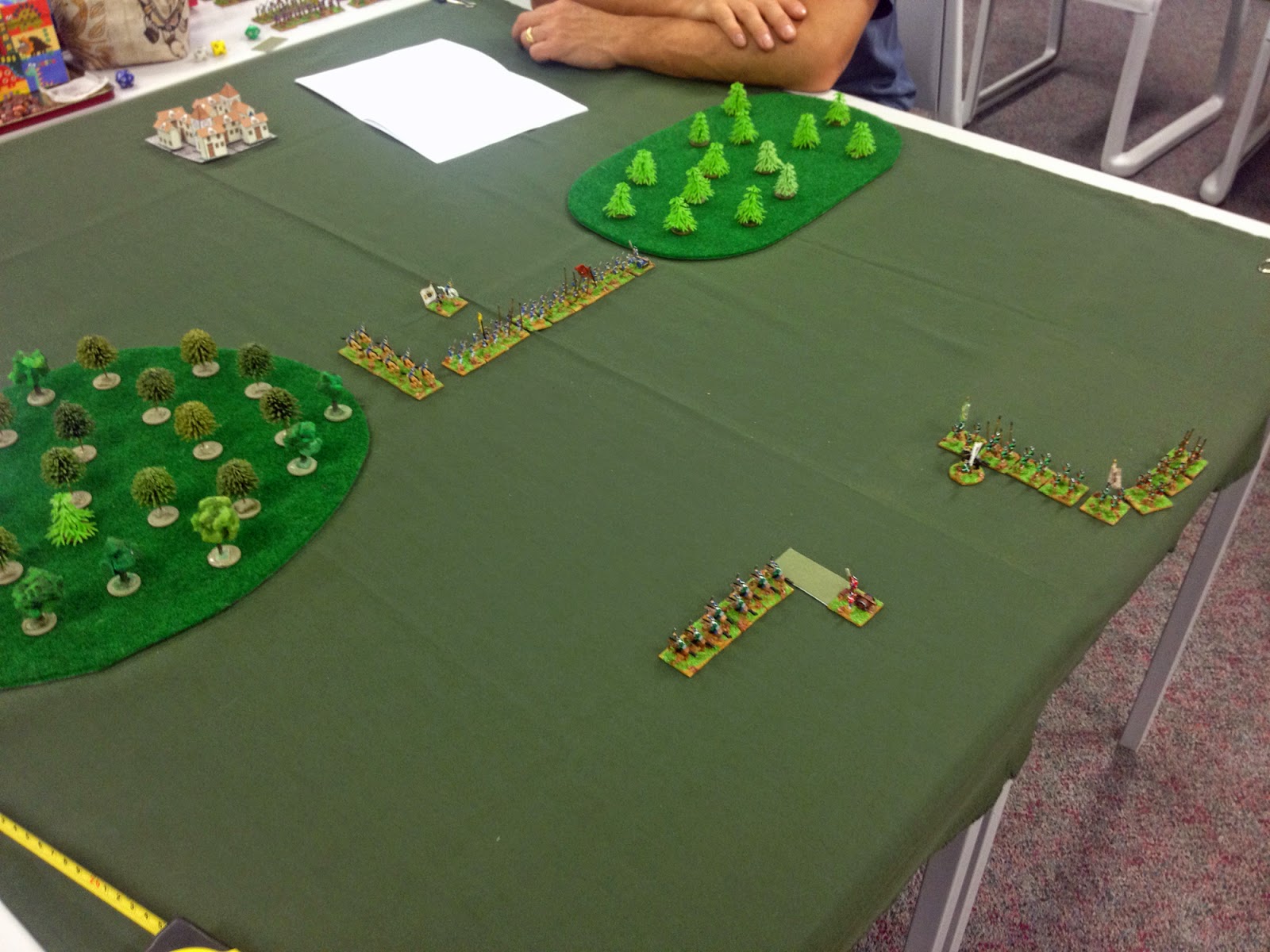 The initial Swedish deployment - two infantry, some cavalry and an artillery battery. 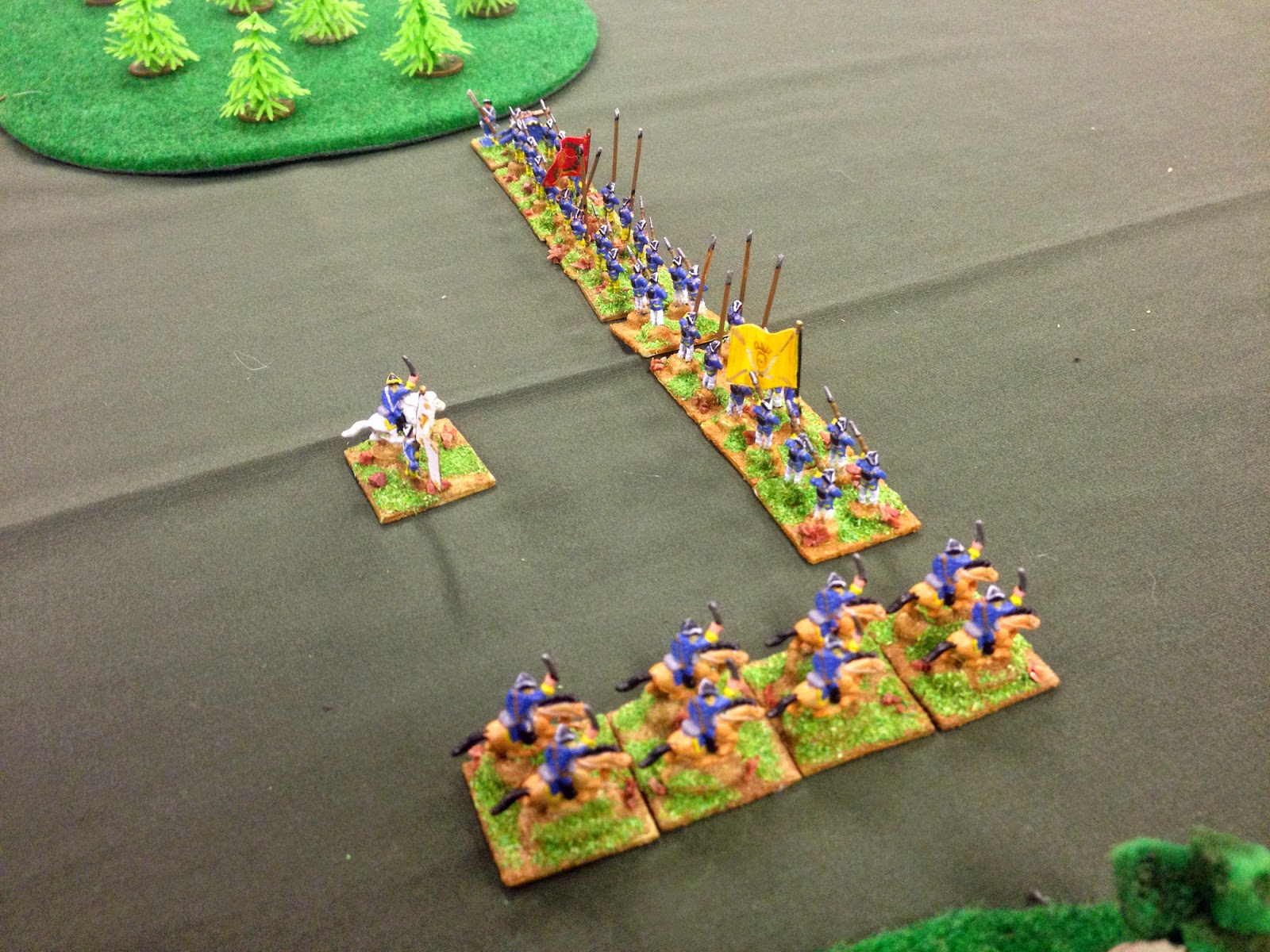 The Russian forces began to build up, moving into position in nicely organised columns. 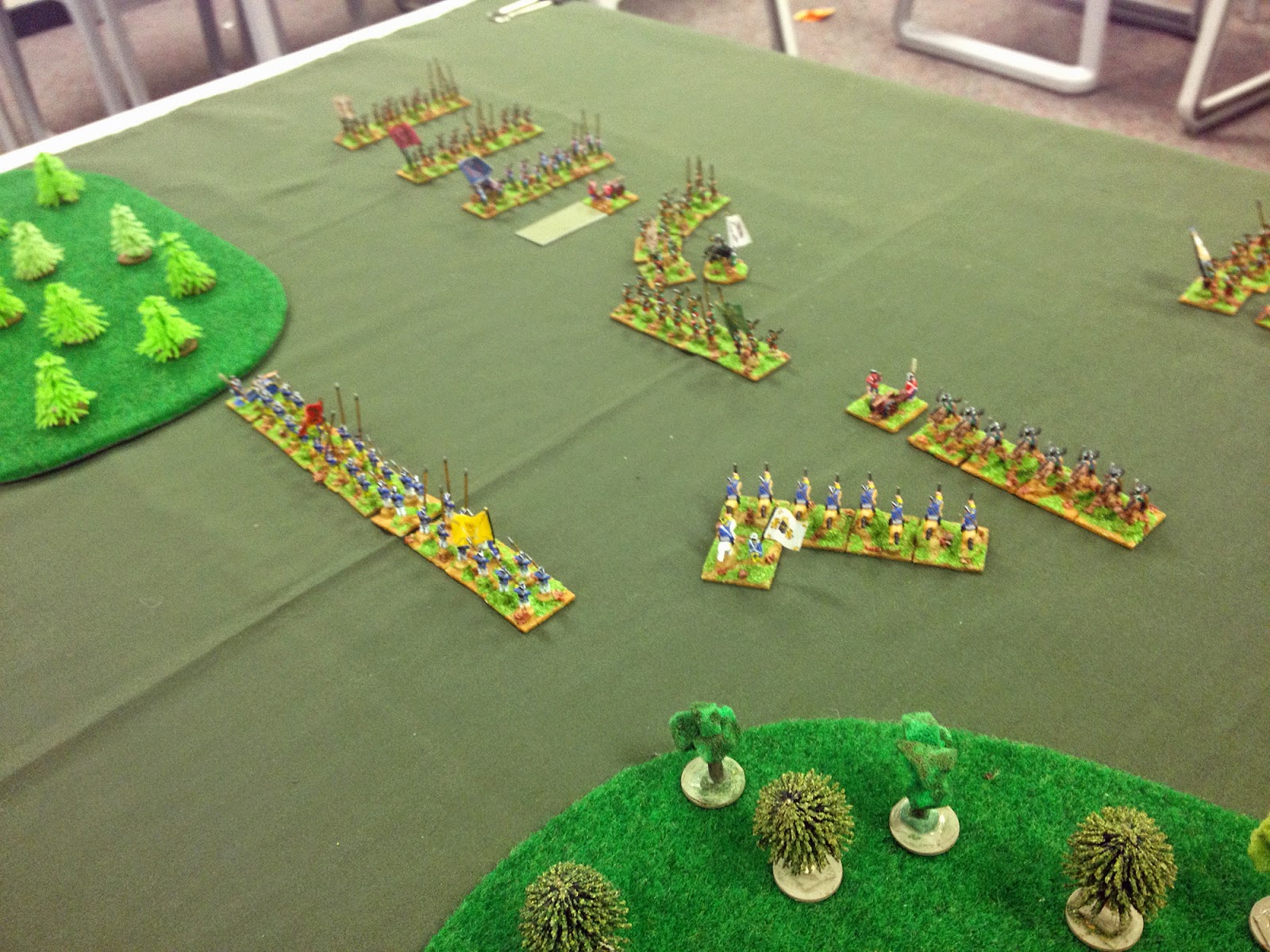 Ever aggressive the Swedes made a preemptive strike, attacking with their horse. All of the Russian horse were classed as dragoons which meant that they could dismount. But they suffered a penalty in combat, so would be outclassed by the Swedish horse in melee. 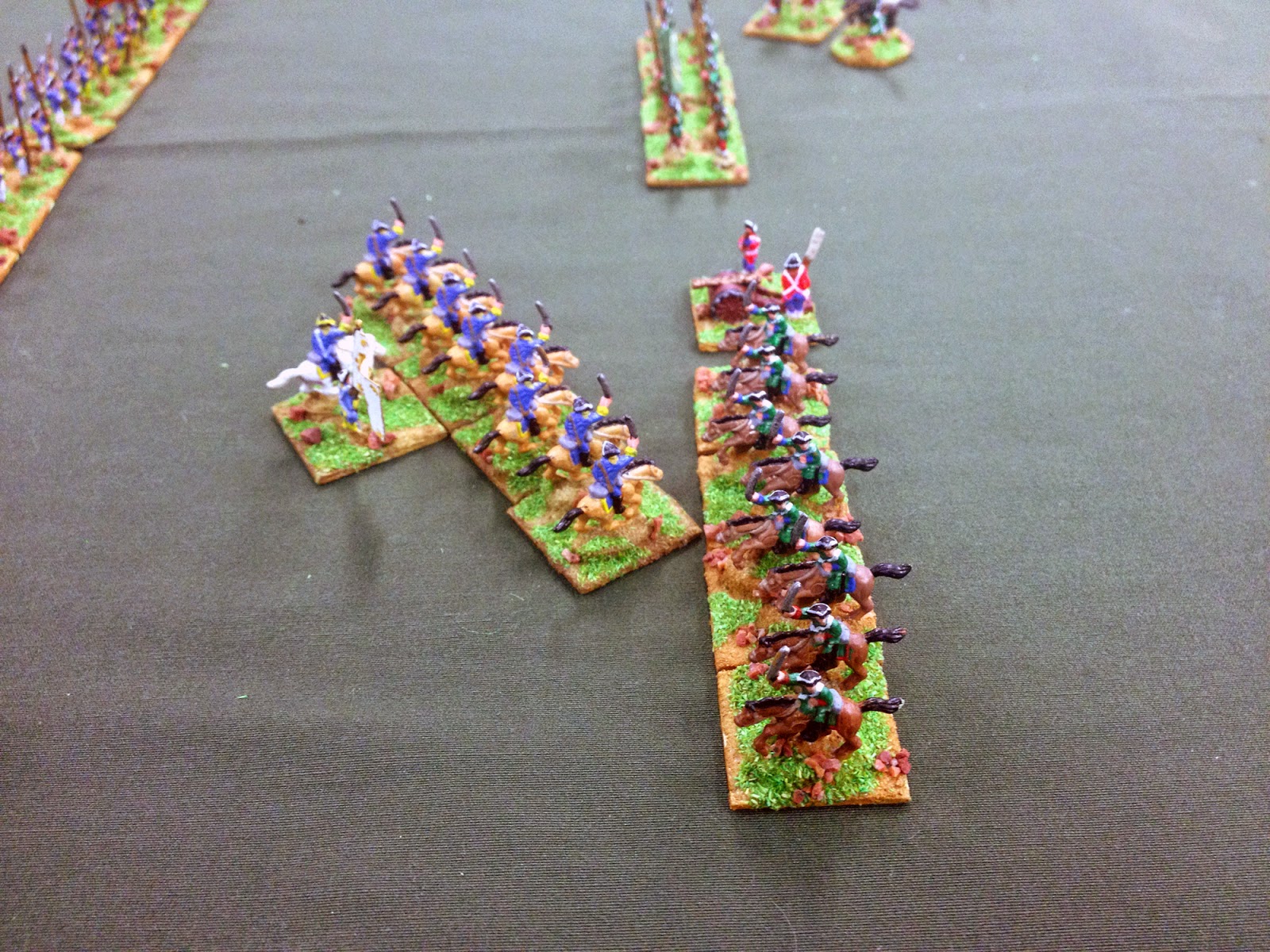 The Russian dragoons fell back, ending up in support of a second brigade. The Swedes turned on some Russian artillery. 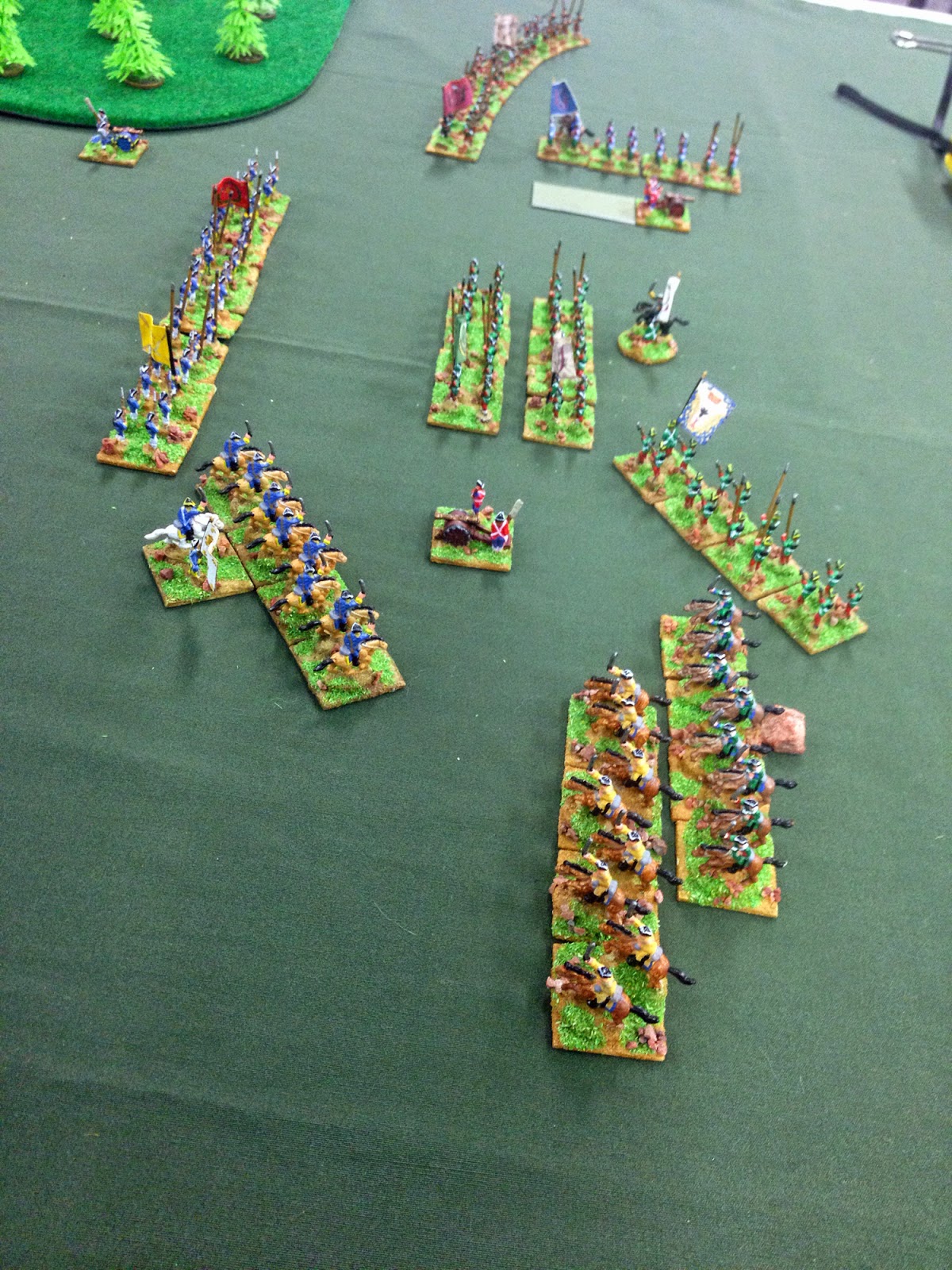 The Russian dragoon charged, but the Swedes held them off through some excellent morale rolls. With their general attached they could also reroll morale tests, something that proved very useful. 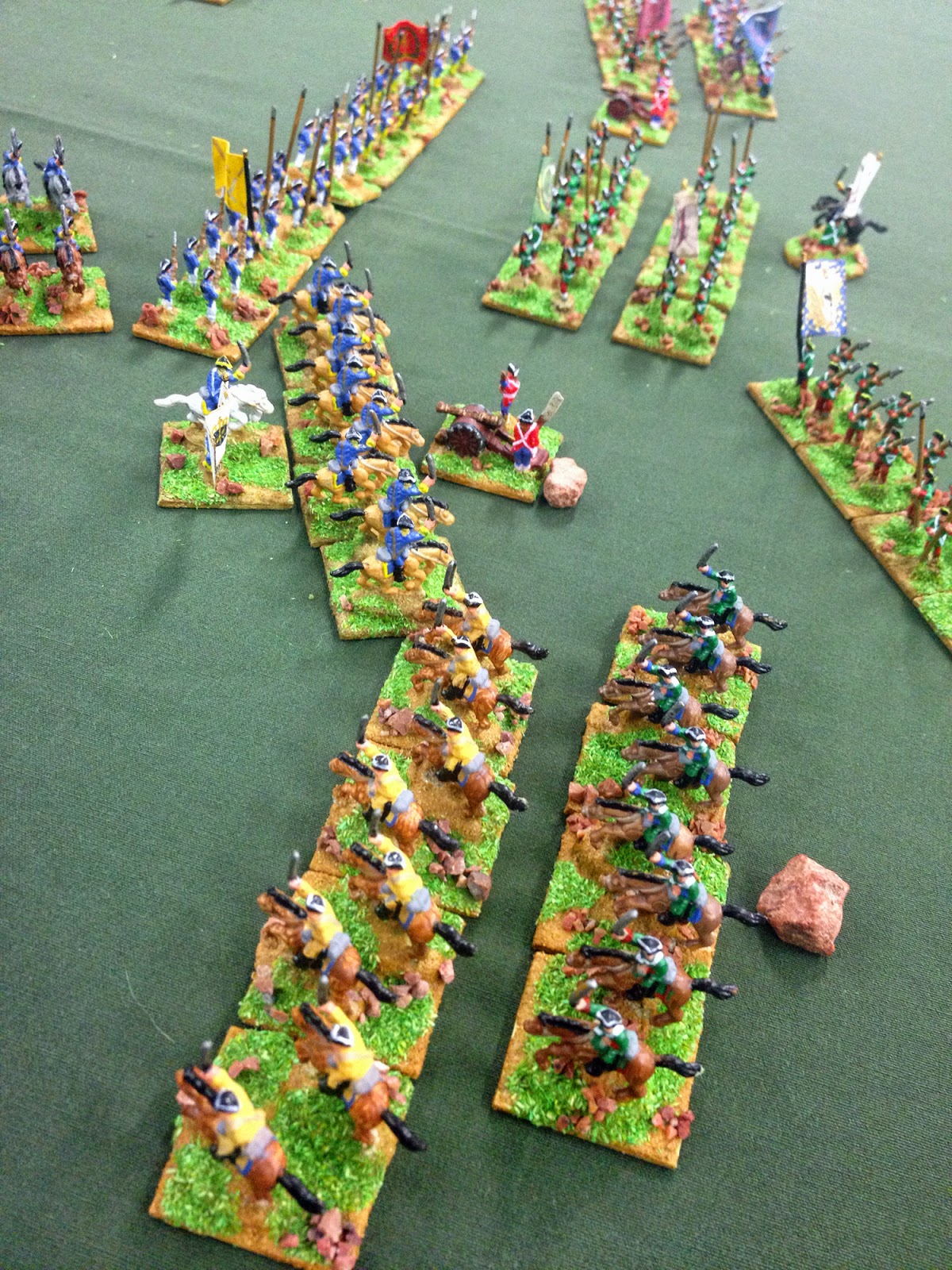 Meanwhile Peter I had been busy organising his infantry into supported lines, and started to put the outnumbered Swedes under pressure. The first of the Swedish reinforcements can be seen at the top of the picture. 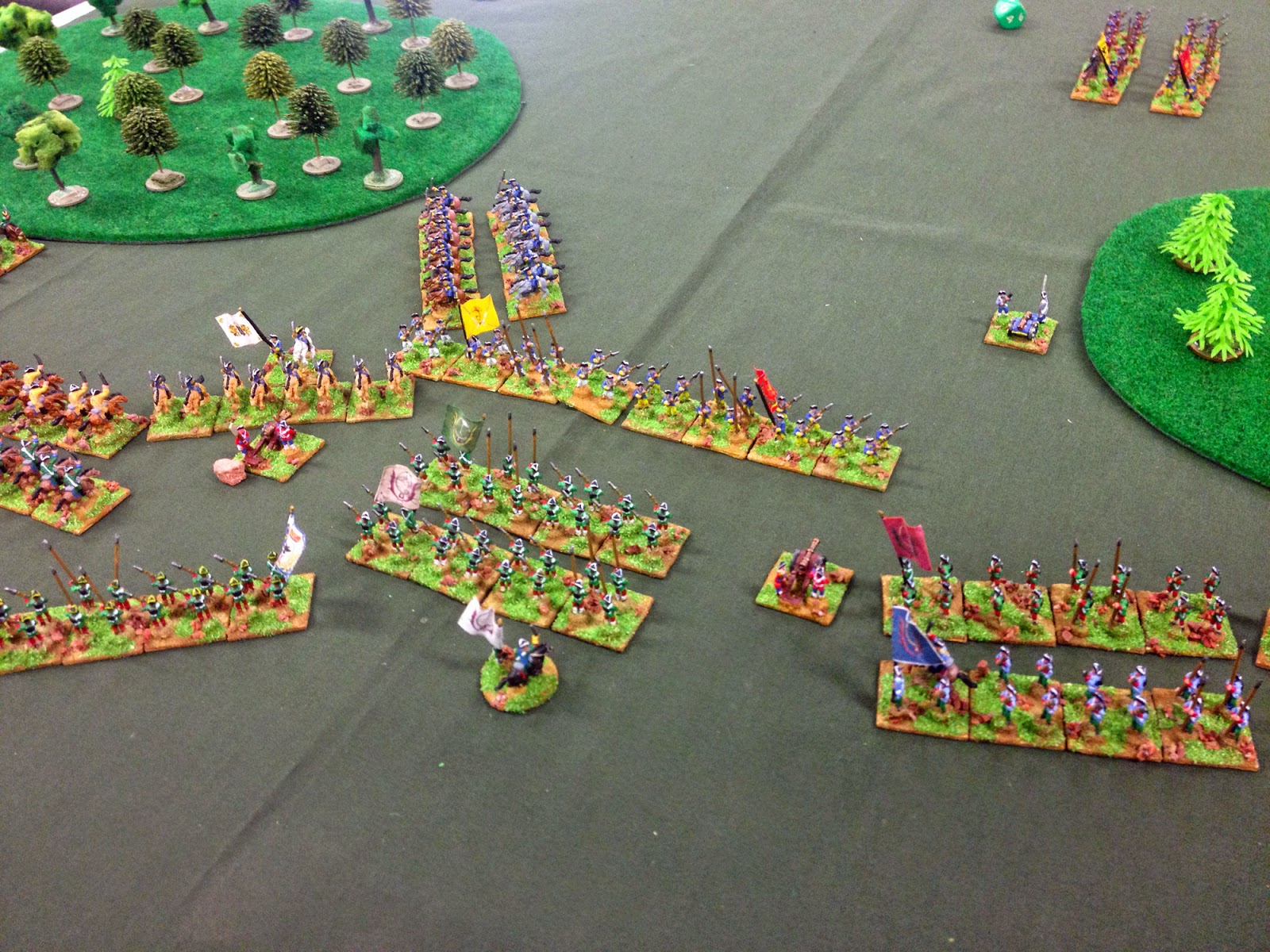 More horse was sucked into the battle on the Russian left, but the Swedes ended up in a confused mess with units facing in all directions and failing to support each other. This offset the edge they had over the Russian dragoons who were operating in a tighter, supported, formation. 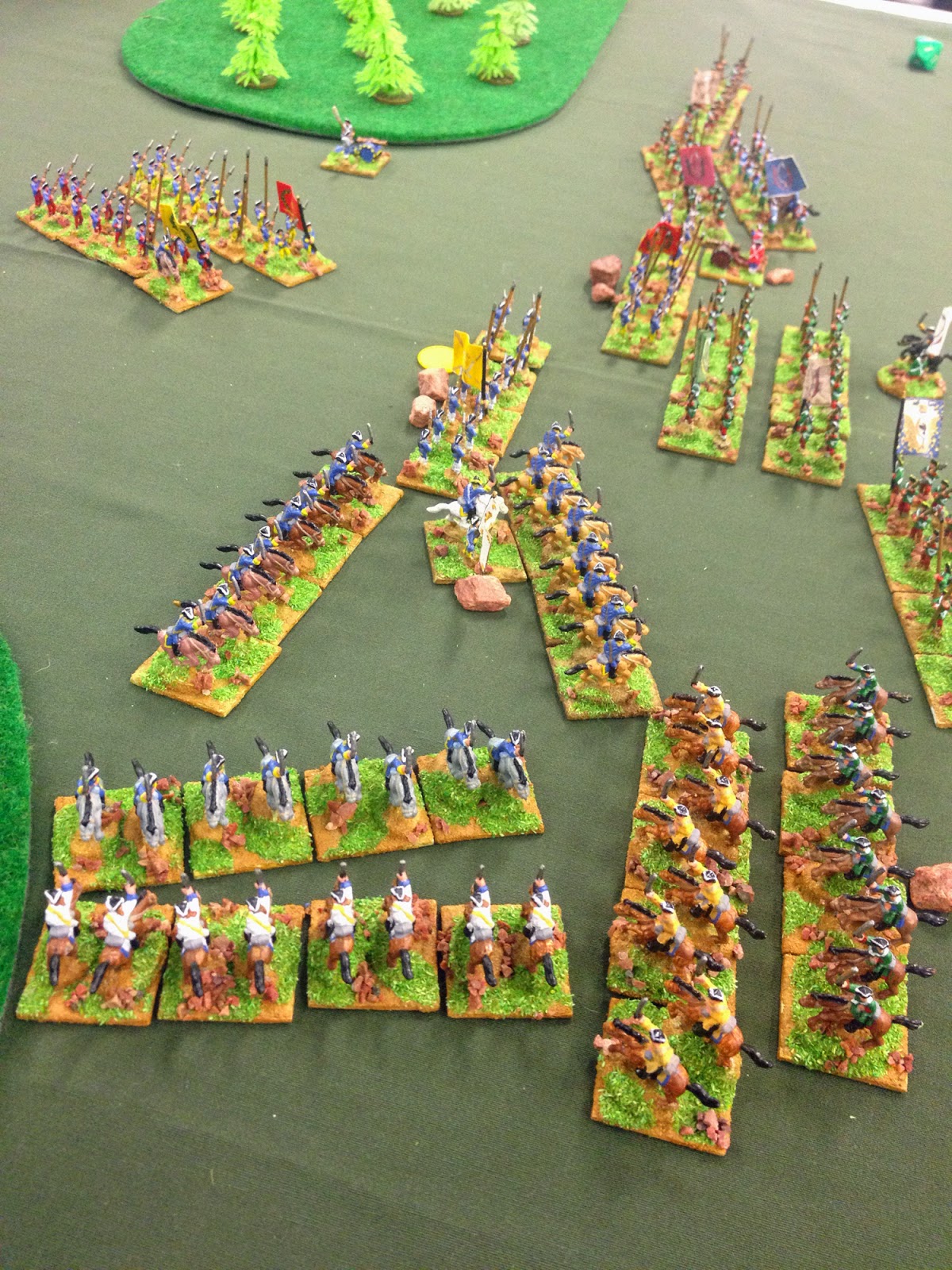 The Russian infantry plodded forward, and the Swedish infantry line dissolved. The second line started to move into position. 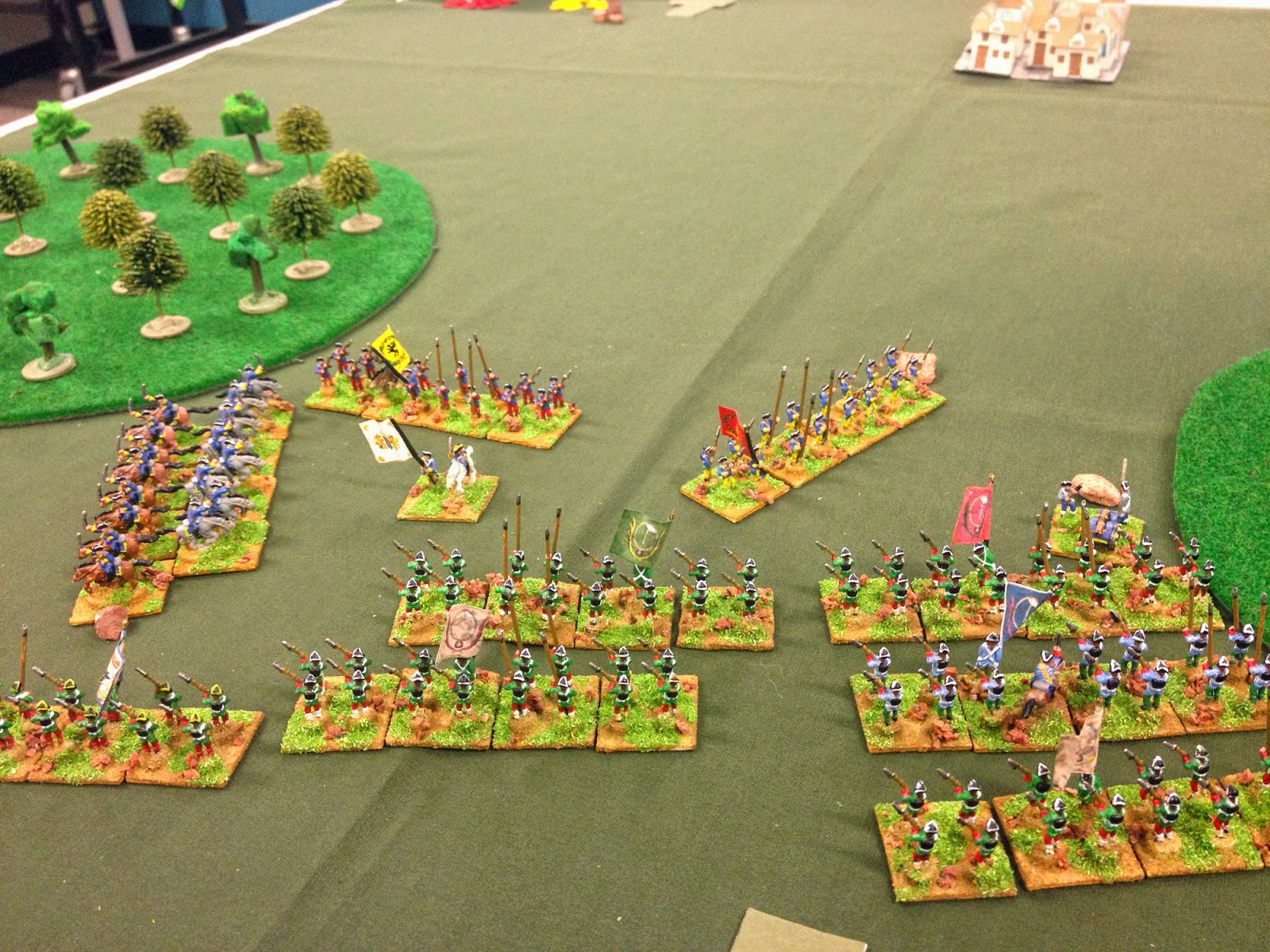 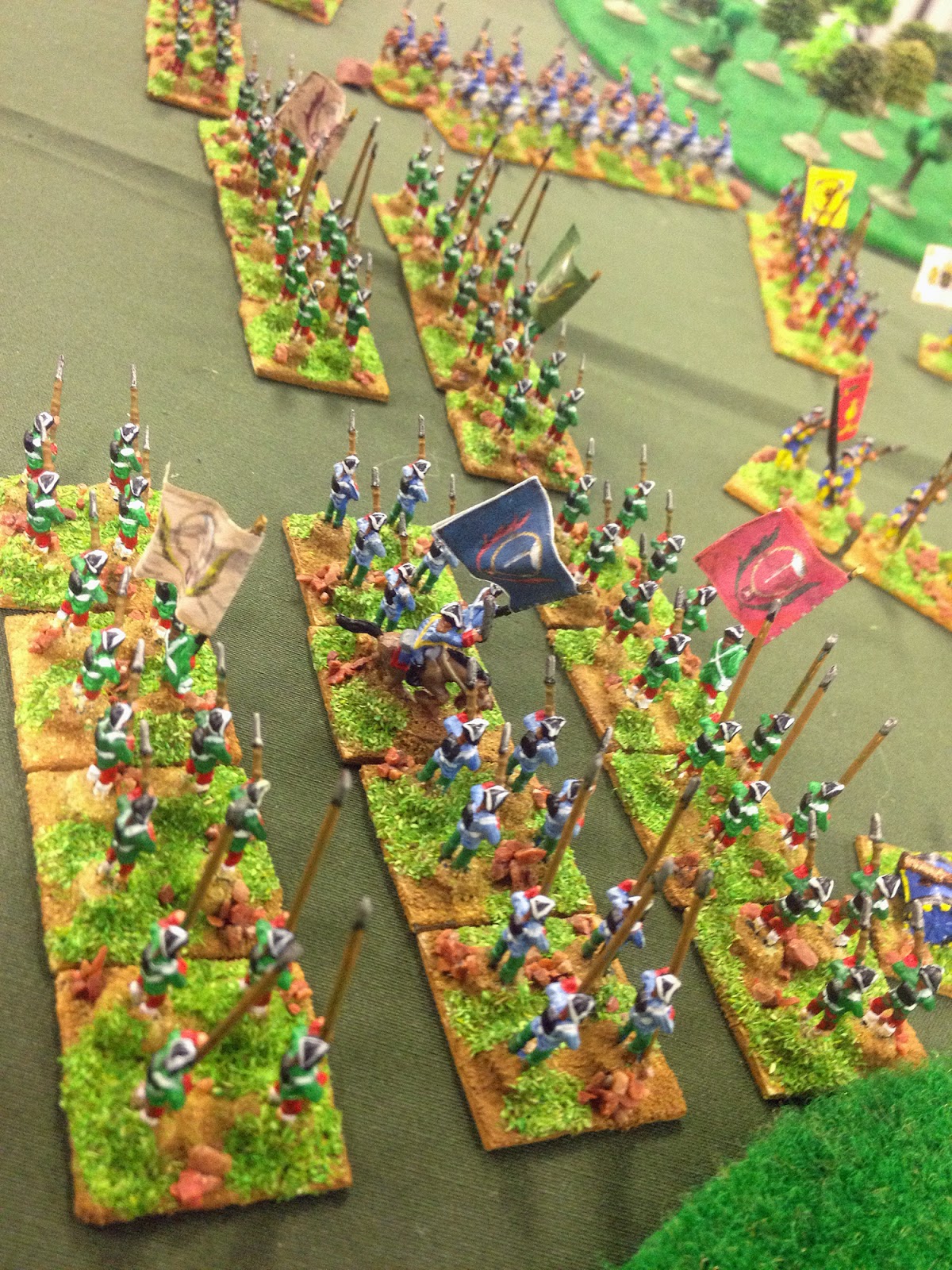 It was now halfway through the battle, and the village was still a long way off. However Caesar's cunning ploy of attaching his general to some horse had proved less good than he thought - the horse routed, taking his general and a useful bonus action reroll ability, with it. 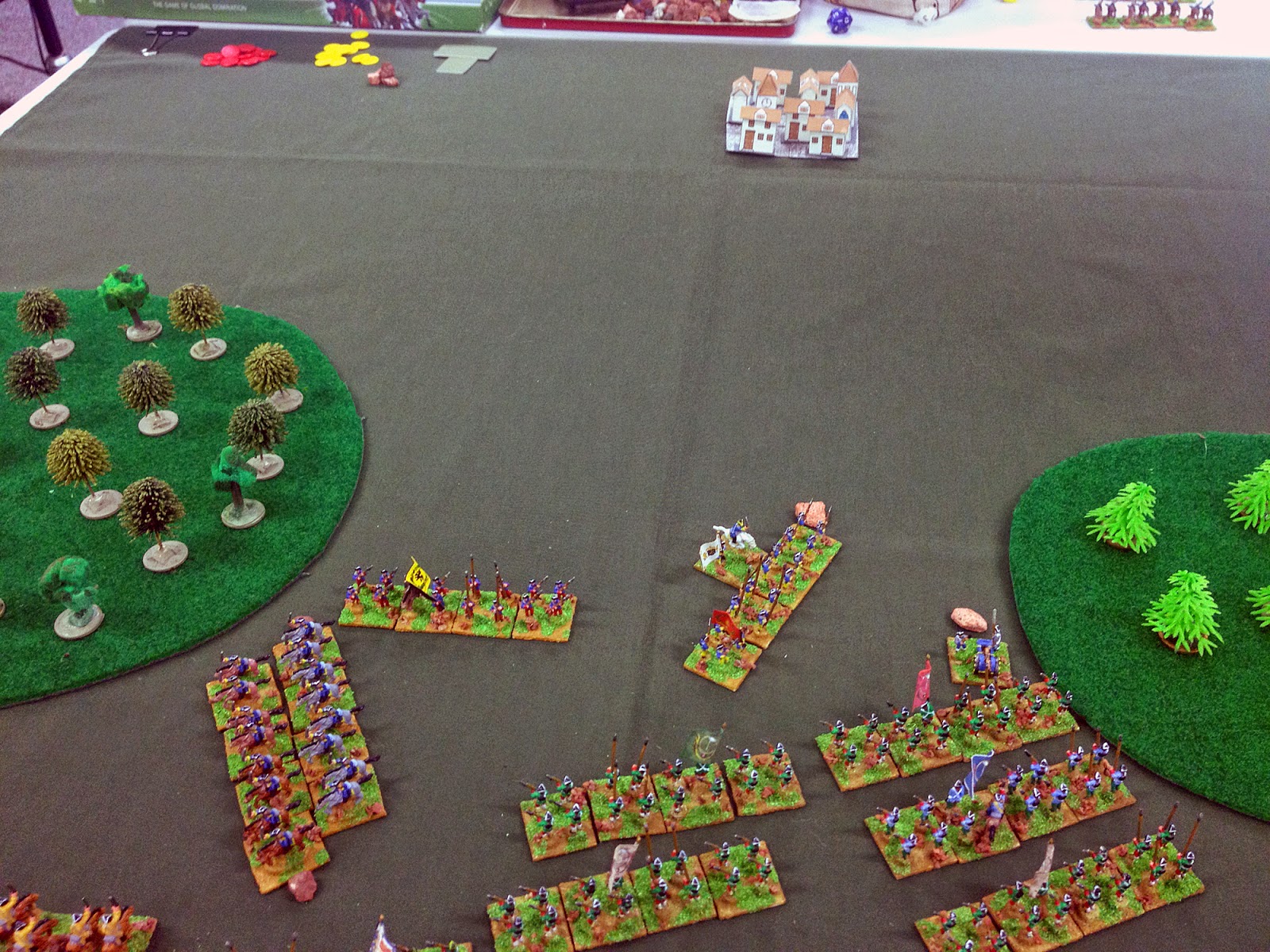 The Russian horse was now pressuring the Swedish right, whilst their infantry was driving all before it. 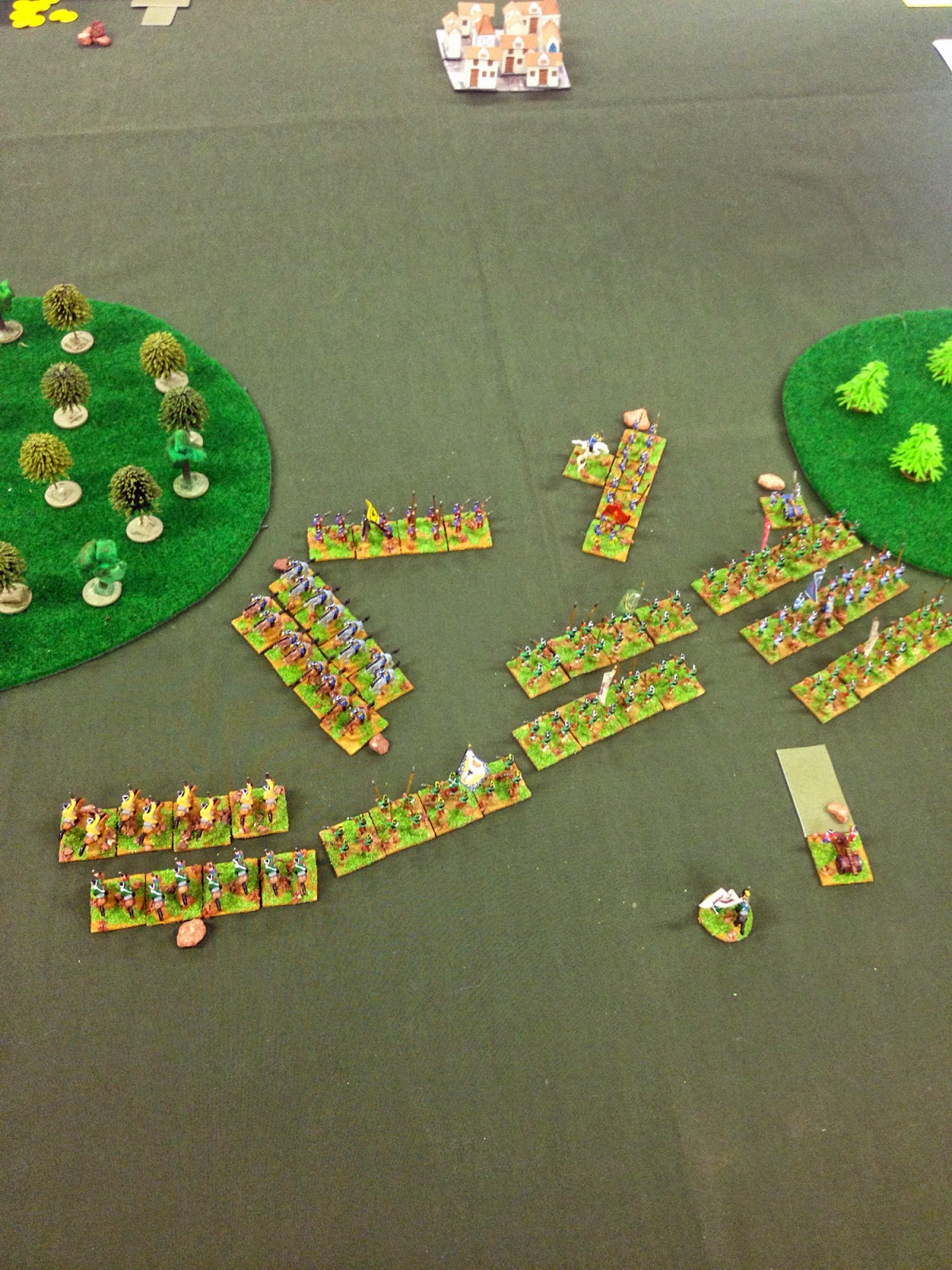 More Swedish reinforcements! Would they be too late? 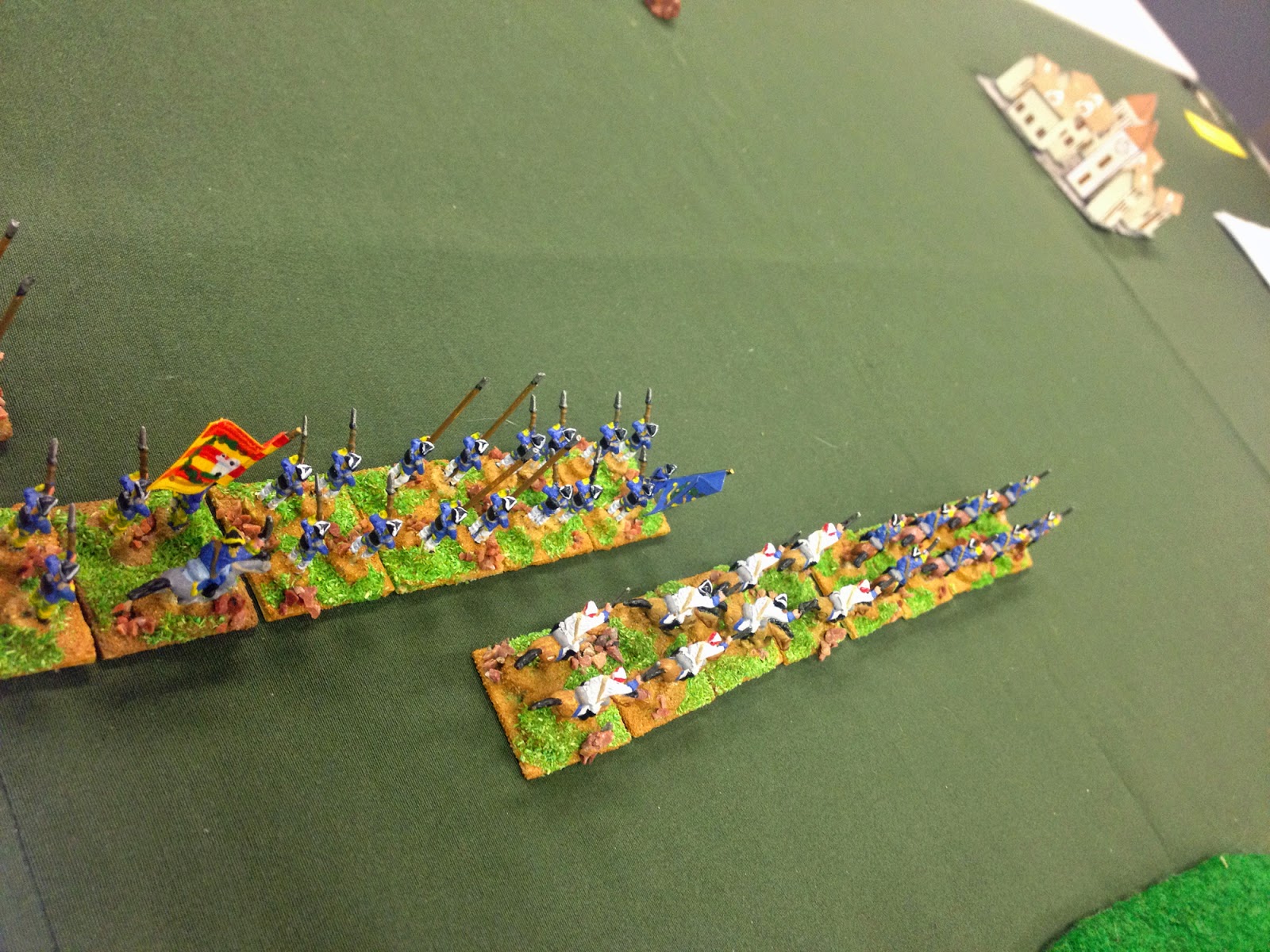 The answer was 'Yes'. As they moved into position to support the survivors of the main line as it fell back, a unit of Swedish horse broke under musketry and it's rout spread to the whole army, which quit the field. 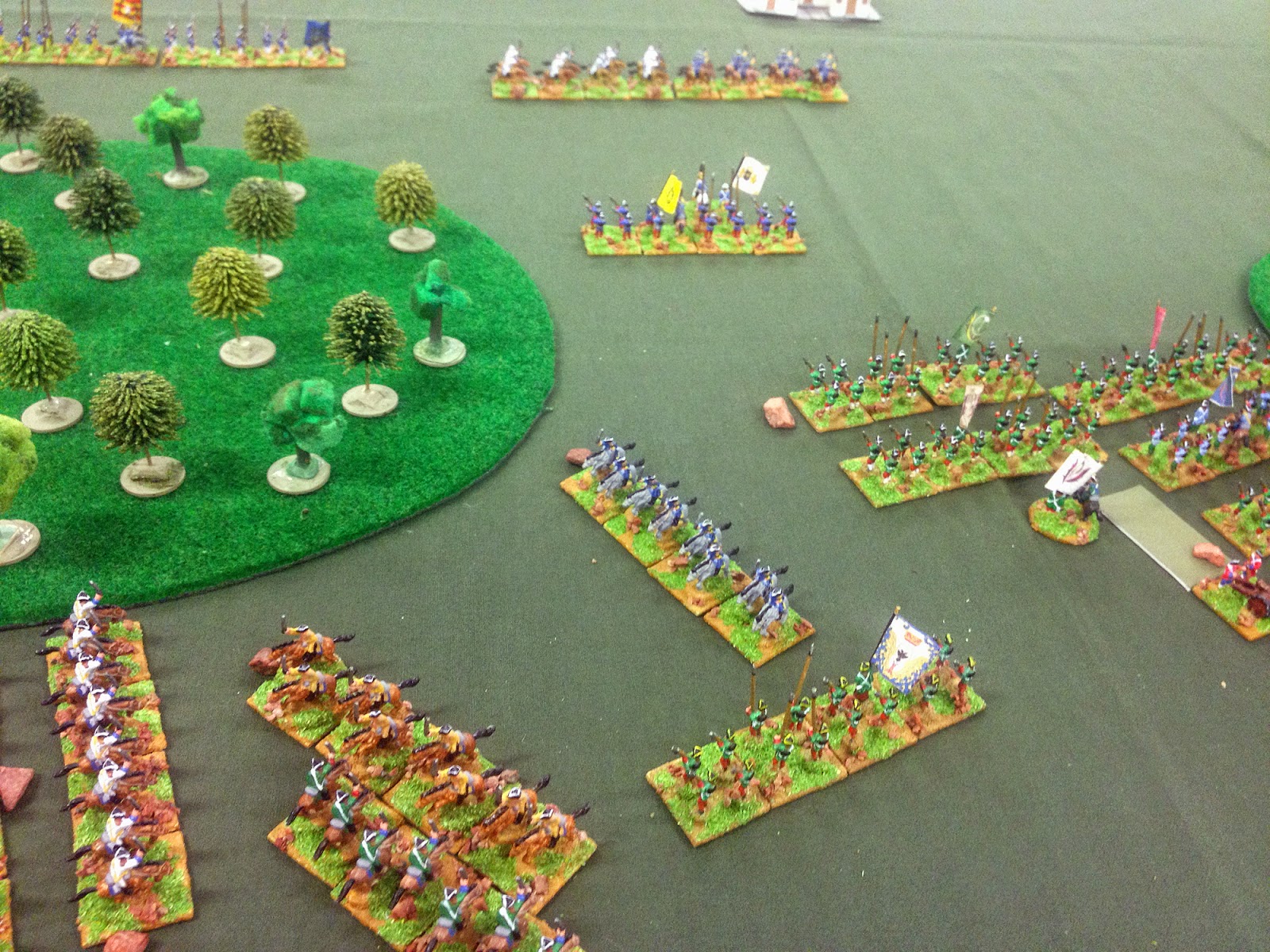 The game took us a good chunk of the evening to play, but we found we were having to house-rule a lot of positional stuff, so future games will be faster now we know how to deal with the many situations not covered in the slim rule-book.

We did play with some changes. I used D10 throughout the game. A 6+ was a morale pass (50% chance), but with no change to the modifiers. This actually makes units slightly more resilient than in the original rules, which use 2DAV for morale, although it's true that they start out with slightly more than a 50% chance of  pass. But the D10 allows for some granularity in applying factors. Actions passed n a 4+, but the modifier for failing a morale test was increased to -2, so a unit still had a 50% chance of failure in that situation. We modified the morale test factor for artillery over 200p to cover firing by dragoons as well, reasoning that the volume of their fire was less than that of the regular infantry. However none of the Russian dragoons ever dismounted, so that change was academic.

We both enjoyed the game, and will be in a better position to run the next one more quickly and with our armies in a more organised manner.