History Of The World

Having played Risk just before Christmas we had another boardgame session with our friends Claudia and John and their two sons today. With plenty of time to play in and plenty of people we went for Gibson Games' 'History of the World', because we hadn't played it in years. I refreshed my memory of the rules - it's not a complicated game - and then we split into four offspring playing as individuals and a couple of partner swap teams among the parents, so I played with Claudia and Catherine played with John.

'History of the World' is played in seven turns, each representing an historical epoch. In each turn a player plays one of seven possible expires that came to prominence at that time. It runs from the Sumerians (the first empire of the first epoch) to Germany (the final empire of the last epoch - the nominal end of the game is 1900). After each empire has its turn it scores points for controlling regions of the world. The value of these regions varies as the game progresses - the Middle east and Southern Europe start out scoring high, but drop in value towards the end of the game, whilst Northern Europe and the Americas gain some value. India and China tend to be consistent scoring areas.

The different colours represent the different regions. Each region is split up into a number of areas. This is the board during Epoch II, which starts with the Assyrians, features the rise of the Greek city-states and ends with the Persians. 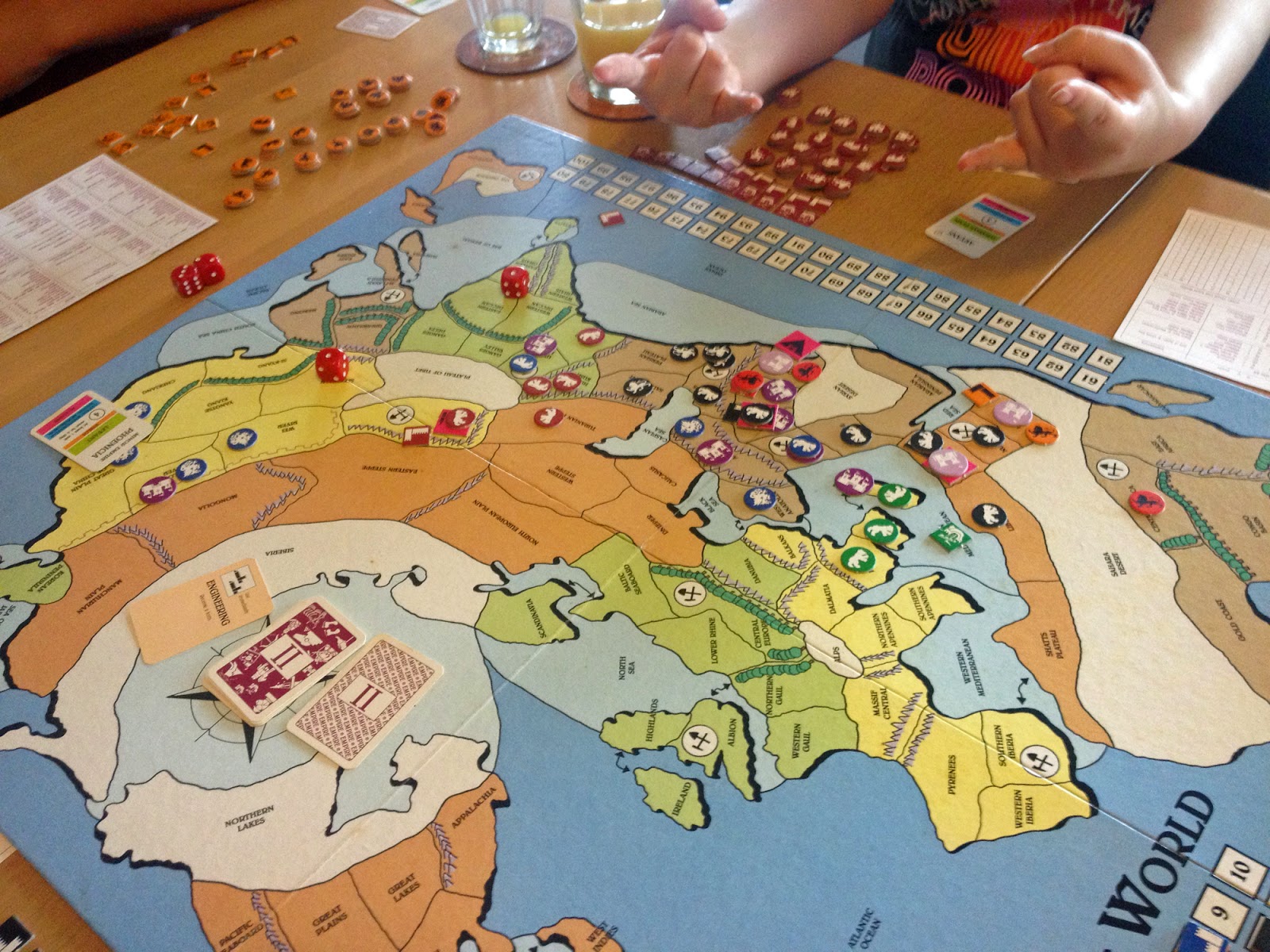 I didn't keep detailed notes of the ebb and flow of the game. Maya had a rocky start drawing two  barbarian empires in the first two turns (the Aryans and the Scythians). These start in low scoring areas and have to attack decent territory from outside. They also don't get capital cities, and those are worth points too. Cei seemed doomed to playing the game in China and India; not bad areas to control, but prone to changing hands a lot. Plus you score better if you can create a presence across the board. He did get lucky in drawing a number of minor bonus empires during the game, though, which helped him later.

I think this picture was taken during the fourth epoch. The blue counters dotted across Europe represent the extent of the Byzantine Empire. Claudia and I, playing red, had just had the first of two disastrous turns when we couldn't capture territory to save our lives, first as the Goths (who failed to make any dent on the Roman Empire) and secondly as the Holy Roman Empire who were a mere footnote in European history in this game. There's lots of green dotted over the map. That was Catherine and John, who managed to create a nice solid area in Greece early on with the Minoans and the Greek City States and then consolidated their position with the mighty Roman Empire. 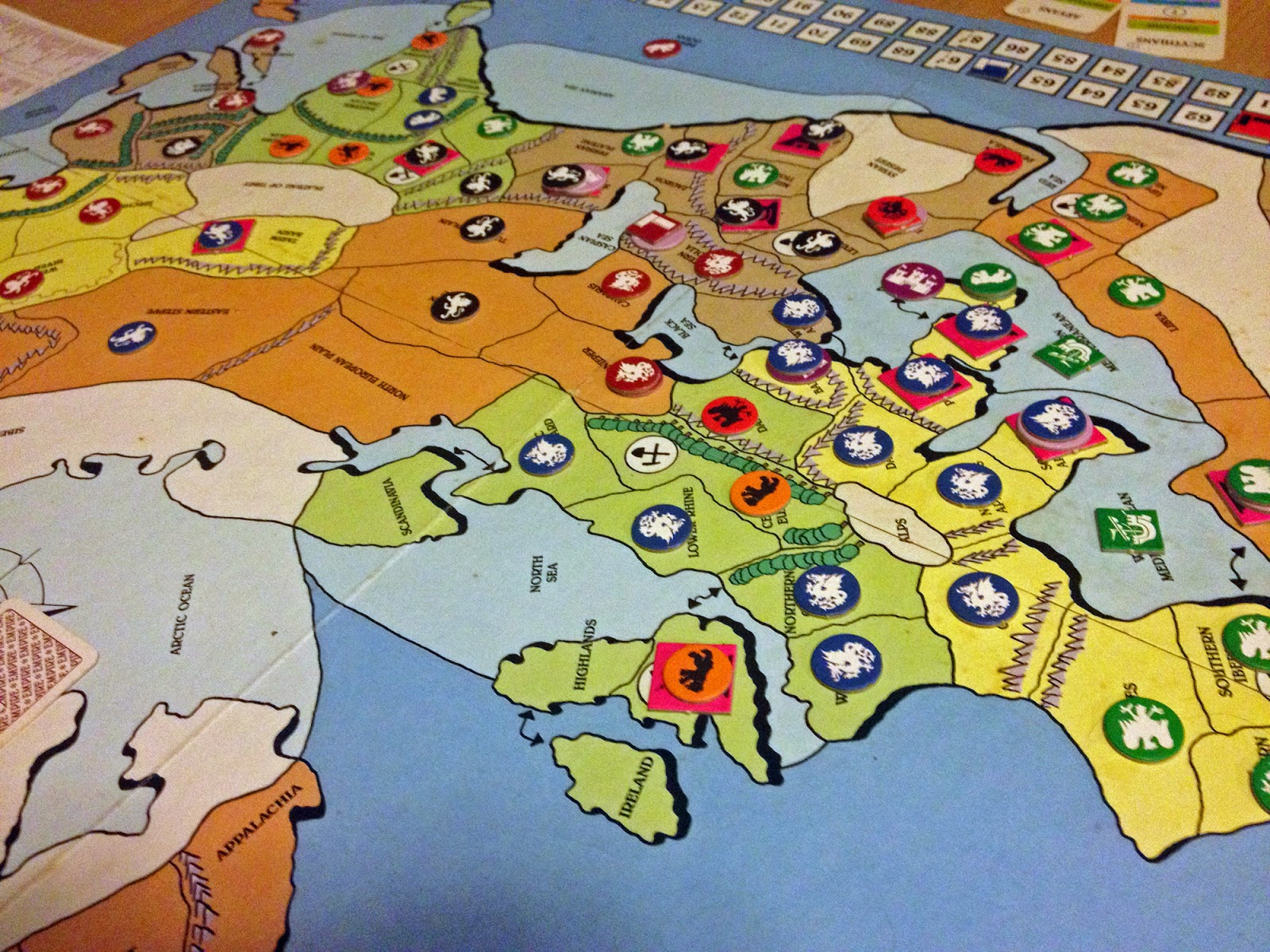 Epoch VI, before the rise of the Ottoman Turks and the beginning of European overseas expansion, via the Portuguese and Spanish in this turn. The seventh and final turn is dominated by European powers - Russia, the Netherlands, France, Britan and Germany. The USA and Manchu China are also covered. 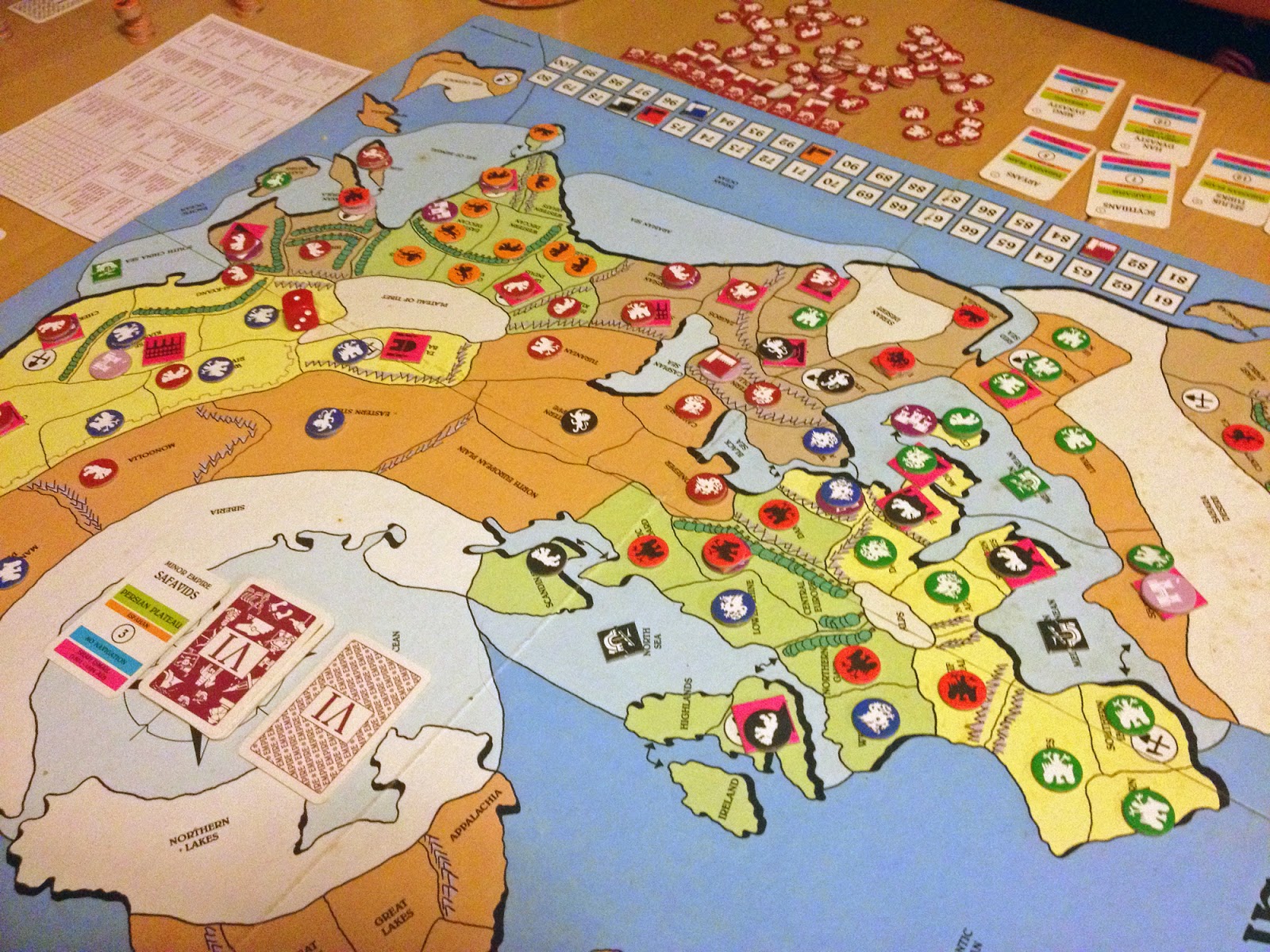 The game kept everyone interested and excited, as you can see. 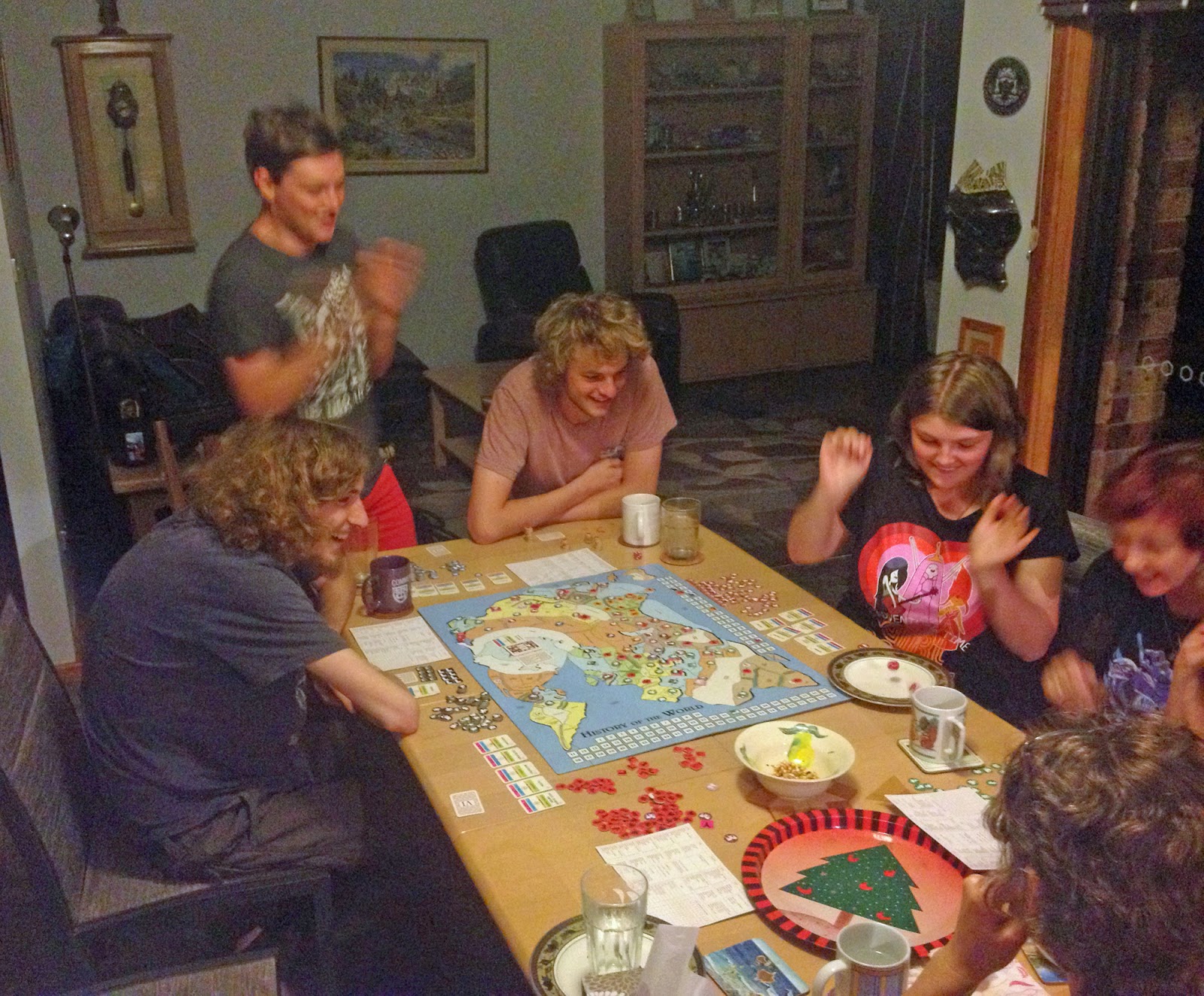 In the end Catherine and John seemed to be set for a runaway victory, racking up what seemed to be an unbeatable score. But Cei came within a whisker of beating them after picking up the British in the last turn and using them to grab territory across the globe. Only some bad combats in China, which cost him a couple of precious units, prevented him from sneaking a win at the last minute.

Claudia and I finished fifth, mostly due to our poor showing in the mid-game with the empires we drew then. Over the seven epochs we played: Babylonia, Carthaginia, Macedonia, Goths, Holy Roman Empire, Portugal, Russia.

Whilst it took us nearly six hours to play (including plenty of chat and nibbles) everyone enjoyed themselves and seemed to pick up the ideas pretty quickly. And I think they'd play it again.
Posted by Kaptain Kobold at 23:40