Ralph hosted last night's game, and we tried the 'Trafalgar' Napoleonic naval rules. It started out with Geoff and I playing, and Ralph umpiring, but Peter turned up later and took a couple of ships.

Geoff had some rascally Dons - three 74s and a 110 first rate. I was the Royal Navy and ran three 74s plus a 100 gunner. Here's my ships heading towards Geoff: 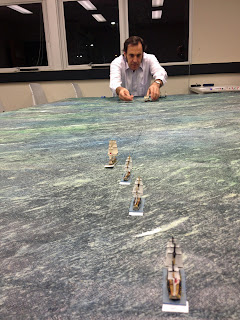 The two lines approach each other, or so it seems. In fact the wind was against me and really I was just trying to keep station whilst Geoff moved towards me. 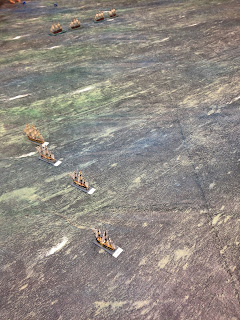 The Spanish home in on the rear of the British line. 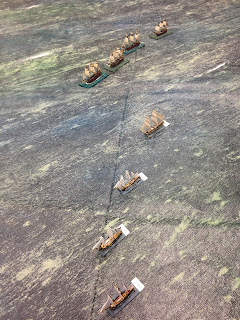 The opening shots - The British 100 (Queen Charlotte) was engaged by the entire Spanish line. 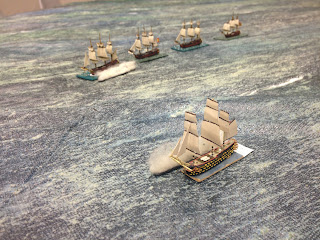 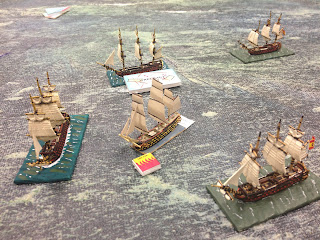 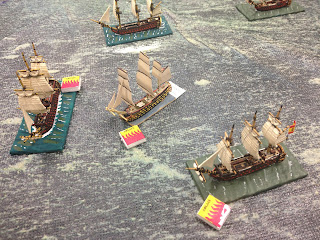 I didn't get any more pictures after that. the Queen Charlotte sank, as did the Spanish Santa Ana. Another Spanish 74 burned to the waterline, or sank. I can't remember which. Indeed all losses were either ships sinking, or burning away/exploding.

I did take one more shot, comparing an old-style Navwar 1/1200th 74 gun ship with a Langton one. There's quite a difference in size. 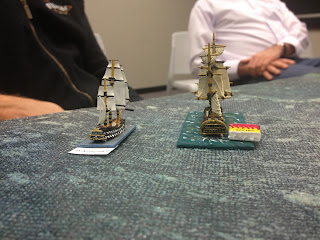 So, how did the rules work? First, a caveat. My comments are based on just playing one game, and not having actually read the rules. I understand there were a couple of house-rules in play. Bear that in mind when reading anything further.

I have to say that I wasn't thrilled. Perhaps I'm missing the point of the rules in some way, but I felt that there were areas missing or just not handled well. For example, weather changes were frequent and extreme - the wind shifted direction by a high degree turn by turn, and fog seemed to come and go with great regularity. Saying that, the wind didn't seem to make a lot of difference to the game. Unless you were caught aback by one of the frequent swings in direction, your attitude to it had very little effect on your speed - indeed whether you moved last turn had more of an influence than moving into a more favourable attitude. Crew quality and training had an influence on movement, but virtually no effect on firing, except at the longest ranges. I may be wrong, but in a straight fight between two ships of a roughly equal strength the clincher would generally be how quickly crews could fire and reload guns, with better training and experience giving the edge. 'Trafalgar' didn't reflect that; the poorest crews fight their guns as well as the elite ones.

So would I play 'Trafalgar' again? Yes, certainly. You can't judge a set of rules by one game, especially one where most people are learning the ropes. But I've played a few Napoleonic naval sets over the years, and I didn't find that 'Trafalgar' had anything in it that wasn't done better elsewhere. It was said that a lot of stuff could be tweaked with house-rules, though, so it might be worth looking at that.

To end on a positive note, those Spanish ships are Ralph's, and don't they look great? The sea-mat is one he bought, and looks pretty spectacular as well; it really added to the game.