The war between the heroic Riskovian Stellar League (RSL) and the mighty Confederation of Caffeinated Beverages (CCB) in the year 2525 is a little-known conflict, but one very well suited to gaming. We played out a typical encounter battle last night using Future War Commander and Geoff's 6mm sci-fi figures.

The RSL had a lot of tanks. Here they are, lined up for a mighty thrust up the CCB flank. 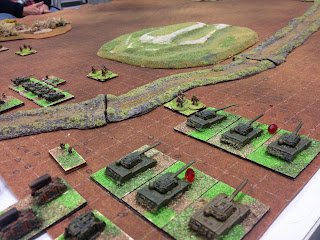 The CCB, lined up at the opposite end of the table. 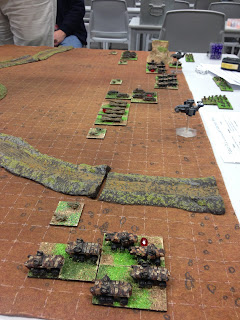 One of the CCB commanders, Caesar, ponders his plans. Because he is only fractionally taller than the men he commands he is able to inspire them to great feats of heroism and derring-do (Translation: He rolled far too many double-ones for activation ...) 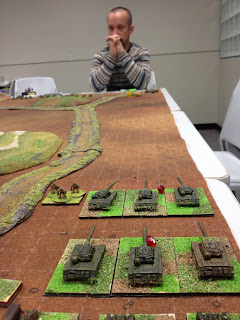 The RSL artillery battery stacks up some dice before targetting a CCB infantry platoon. 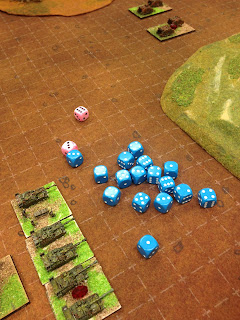 The end results - the dice mark how many hits have been scored against each base. 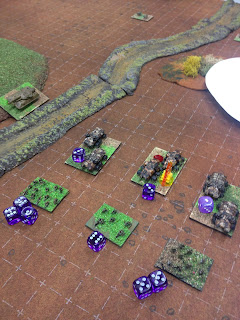 And once the saving rolls had been failed, this is what was left. You'll just have to imagine the hole in the ground. 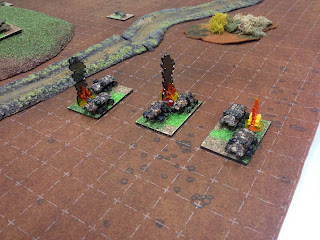 Unfortunately the RSL tanks were on the receiving end of Caesar's blinding activation rolls, and soon ended up as a mass of twisted, burning metal. 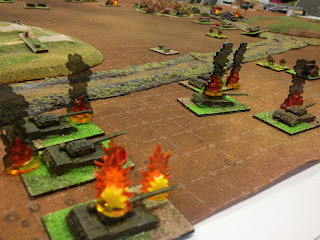 The RSL infantry made an heroic advance on the other flank, but in a dense patch of jungle were overwhelmed by numberless hordes of CCB troopers and driven from the field.

The RSL will have its revenge.