Today, May 4th 2013, is Free Comic Book Day. It's a day when comic retailers dish out exactly what's written on the tin - free comic books. I decided that I couldn't pass up an opportunity like that, so planned to travel up to Sydney (a mere two hours away by train and home of my 'local' comic shop) to pick up some of the goodies on offer. Apparently there was a Superman comic and a Marvel preview for everyone, plus two other comics from a selection of fifty tiles, all specially produced for the event by various publishers.

In fact I was seduced by something else as well, more of which later.

As is often the case with things like this, I switched to 'girl-mode' for the day. One thing led to another, and my wife Catherine and daughter Maya decided to accompany me, so leaving my son at home to mind the chickens we made it a girls' day out.

So, up at 6am, and on a train by 7:30am. Two hours later we approached King's Comics on Pitt Street to see a gigantic queue of nerds. Heaven. It was like the queue for Salute, but without the personal hygiene issues.

There were people in costumes, of course. 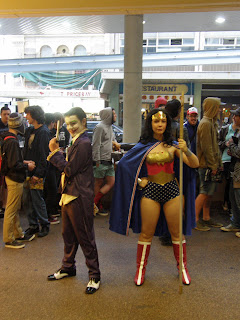 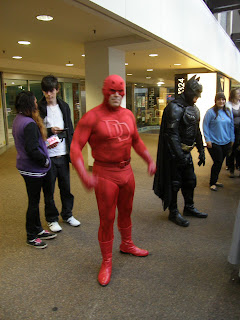 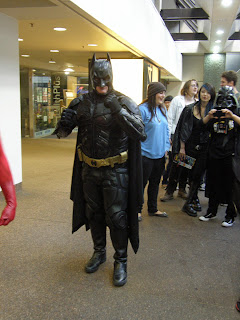 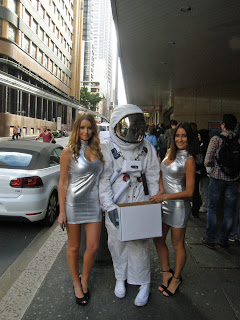 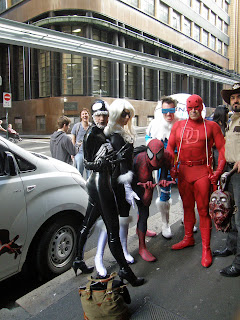 We waited patiently for 40 minutes or so in a queue that moved steadily. Would all of the goodies be gone before we got there?

Maya and I whiled away time posting duck-faces to Facebook, because we have no shame. 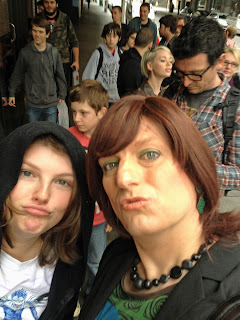 Catherine got us some coffee ( a local retailer was doing a 2 for the price of 1 offer to cash in on the huge captive market outside). 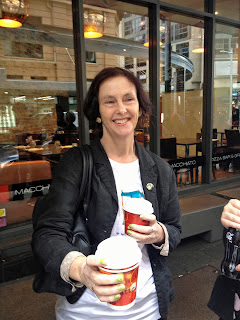 Note the genuine monorail reflected in the window behind her (although I believe it's scheduled for closure now).

And here's my two lovely ladies ... 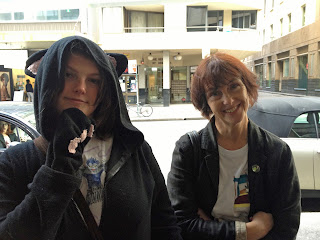 Maya has a thing for dressing up as a cat. But who am I to criticise?

We made it into the shop, where I didn't take any pictures, because we were too busy acquiring stuff. We got our Superman and our Marvel Infinity. I picked up 'Steam-Engines of Oz' as my free choice, which is a sort of steampunk Oz comic. Interesting, but not outstanding. Catherine picked up 'Scratch 9', which concerns a cat that can summon its previous lives, and 'The Red Ten' which is the start of a mini-series adapting Agatha Christie's 'Ten Little Indians' as a superhero story. I can't remember what Maya picked up, but I know at least one of them was specifically for the art-work as she's an aspiring artist/designer/animator and likes the inspiration.

I also got the goodie I went for - a free Heroclix figure. As part of the promotion for Iron Man 3 you could drop one of your two comic picks and have an Iron Man figure instead. How did they know I wanted an Iron Man figure? I have no idea. But I did. And I got one.

Here I am looking reasonably pleased with my acquisition. 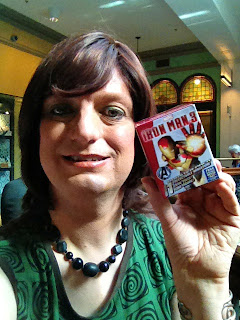 And here's the figure. I think it's a standard Heroclix figure, although it has a different dial to the commercial one.That  makes no difference to me. Being free? Now that I like. 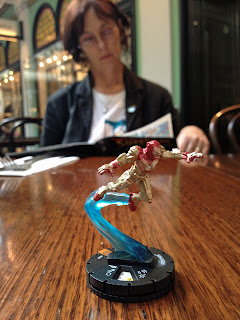 In the background Catherine can be seen reading her Superman comic. She doesn't like Superman. She thinks someone should punch his smug face repeatedly.

The new Heroclix dials are very practical, which is great if you play Heroclix. They're a lot chunkier than the old ones though, so more obtrusive if you just want the figure for non-Heroclix purposes. One day I shall start rebasing my Heroclix.

Having got my Iron Man I bought a couple of Heroclix boosters form the Iron Man 3 range. I got duplicates. How my daughter laughed. But it's the rather dull Iron Man stealth armour, so at least one is ripe for a repaint of some kind. I may do it in something like the Iron Man colour scheme of my youth, which I recall had less gold than the current one, and more red. I need to work out how to mix a slightly metallic red though. 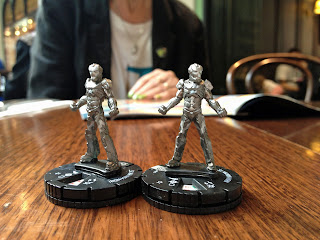 We also popped into a big bookshop, Kinokuniya, that was participating. There were more costumes, of course, enough manga to keep my daughter in a state of bliss for months and a number of Australian artists and illustrators for her to talk to. These included Marcelo Baez, who lives locally and who we have coffee with some mornings. Here's Catherine and Maya with Marcelo. 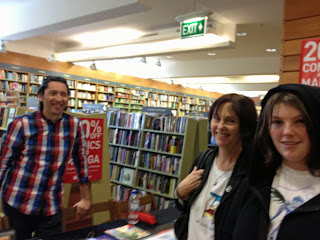 And here's a link to his blog.

After lunch we were comic'd out, so we hit the markets - Catherine wanted a hat and I'm after some boots - attempted to find another geocache (we failed) and then headed home, tired, footsore but loaded with loot.