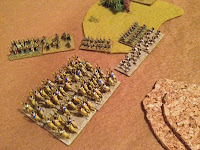 I'm sure you're all really bored with HOTT ancient armies by now, but I thought I'd share the lists for some of the armies I have and use. They are based on those in DBA 2.0, although I have tweaked them to add a little interest in some cases.

All of my armies are based on 40mm frontages, generally with four times the number of recommended figures. So a 3Wb has 12 figures and a 4Bd has 16. I have used the 'correct' base depth, except where noted (depths assume 40mm frontages, of course). Elements recoil/pursue their actual base-depth.

Generally it's fairly easy to translate troops from DBA to HOTT. I won't bore you with the details, but some troops translate directly, others have a near equivalent (Riders cover both Light Horse and Cavalry, for example) and some require a little creative thinking. For example, I normally drop Psiloi altogether, upping the most common foot type to compensate. But for armies with a reputation for ambush, or who operate in an environment where it seems a likely tactic, I may translate some Psiloi into Lurkers. Some irregular/tribal armies have troops that are classed as Blades; if the DBM equivalent is Bd(I) then I will tend to make these Spears instead, especially if they're going to be matched with an army that has troops that are obviously Blades (such as Romans).

Essentially whilst my translations might be eccentric in places they are, at least, internally consistent.

On to the lists.

Sub-Roman British
1 x Knight or Rider General
2 x Riders
9 x Spears
The Knight general is the Arthur option. Other troops can be a mix of regular or irregular troops depending on era.

Scots-Irish
1 x Knight or Warband General
11 x Warband
The Knight is an old-school general in a chariot. Chariots are based three to a 40mm deep base.

And my 'Roman Era' armies.

Scots-Irish
1 x Knight General
2 x Knight
9 x Warband
Knights are warriors in chariots, based as above.

Meroitic Kushite
1 x Rider or Shooter or Behemoth General
1 x Rider
3 x Shooters
6/7 x Spears
The army has 6 Spears if it has a Behemoth general, 7 otherwise. The Behemoth is, of course, elephants.

Arab Nomads
1 x Rider General
5 x Riders
4 x Spears
2 x Shooters
Aside from the general, the Riders can be a mix of horses and camels, mostly the latter.
Posted by Kaptain Kobold at 18:00