When playing 'Munera Sine Missione with Victor the other day, we played one bout with his Crupellarius figure. The Crupellarius is the heaviest gladiator in the game, wearing full body armour and carrying a good-sized shield. This gives him excellent protection (from the front he saves any wounds on a 5 or less on a D6), but also means that he's the slowest gladiator in the game in terms of Action Points.

Victor said that his Crupellarius was particularly unlucky, but I wondered afterwards if it was because the type was still inherently weak under the rules.

I decided to try an experiment, and pit my Crupellarius against some other types to see how he fared.

Here is is. In honour of the inspiration for the experiment we'll call him Victor. Maybe the name will rub off on him too. 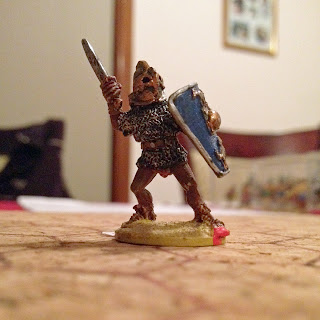 His first bout was against the Thracian which beat the other Crupellarius a couple of weeks ago. This was Victor's chance to avenge the defeat. A Thracian is lightly armoured, and carries a smaller shield than Victor. His curved sword is a difficult weapon to use, so suffers a 'to hit' penalty, but negates some of the protection of Victor's shield. Since his protection is Victor's main weapon, the Thracian is a dangerous foe. 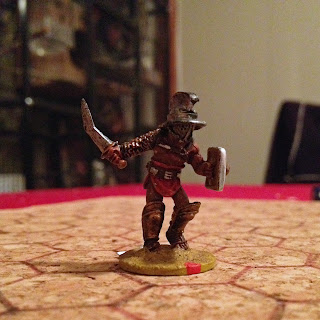 They quickly got stuck into each other. 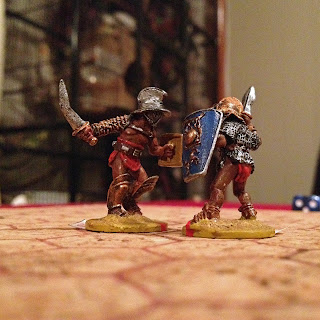 But Victor fell to a low blow - the Thracian nipped around Victor's unshielded side and inflicted some telling blows.. 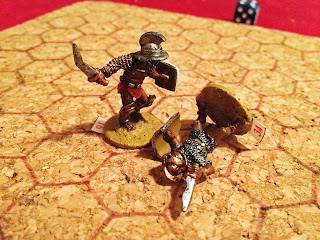 Not a good start for Victor - but he went in for a rematch. In this shot he has just inflicted a hit on the Thracian. 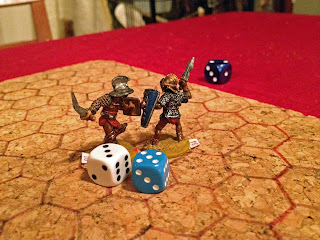 He then finished him off with a critical hit. A lot of long bouts end on criticals; the rules encourage gladiators to get stuck in and keep attacking if they can. The trick is not to leave yourself exposed to counter-attacks. 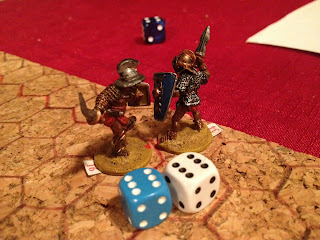 So, with two bouts completed Victor had won one and lost one. 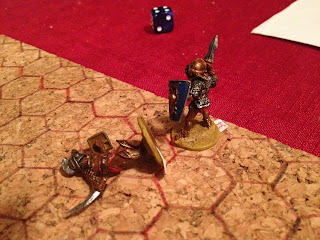 It was time for a new opponent. The Laquearius is lighter than the Thracian, and has a longer reach. A tough opponent unless Victor can get in close. 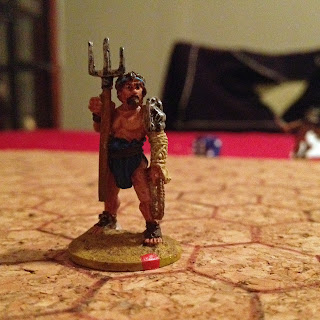 This was a very long bout. Victor took the offensive, and nearly pushed the Laquearius against the arena wall, but then got turned and caught in the same position. For a couple of turns he was off-balance, but his armour, whilst slowing his recovery, also prevented him suffering any harm. Resuming the attack he gained some space, and when attacked by the Laquearius' lasso wrenched it from him and then kept him away from it for the rest of the bout.

In this shot the Laquearius, low on action Points and caught at close range with a trident, resorts to an improvised attack. And, against the odds, scores a hit! 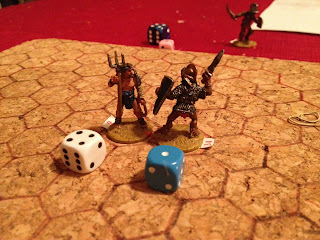 But Victor can always win a stand-up fight - the Laquearius lacks the armour to trade blow for blow at that range. Exhasuted from attacking his armoured opponent the lasso man is unable to retreat, and falls to a series of sword thrusts. Now the score is 2-1 in Victor's favour. 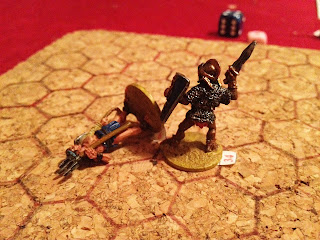 Apparently the word 'boobs' increases hits on your blog for some reason. So say hello to Victor's next foe, a Dimacherius with ... boobs. And two swords, which is really what we're interested in. 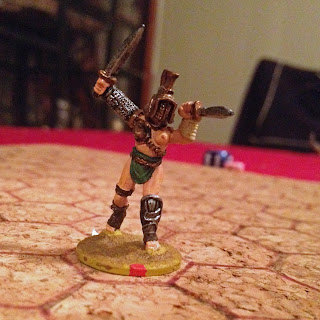 Although her fully-enclosed helmet limits her manuever a little, the Dimacherius is a tricky, agile opponent. She moved in quick, raining blow after blow on Victor, but his protection was up to the challenge and he suffered no injury. 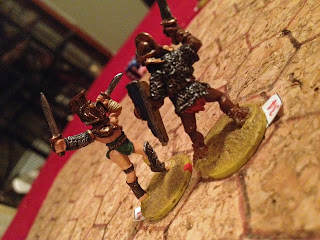 All it took for Victor to win was a well-aimed critical hit. 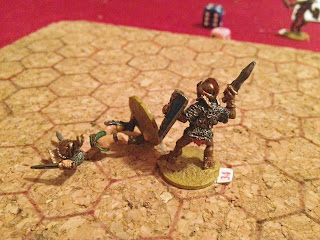 So, in four bouts Victor achieved three wins. The Crupellarius is not a gladiator with much in the way of tactical nuance. Basically you face your foe to get maximum protection, take the hits aimed at you, and keep pushing forward to score hits of your own. Criticals aside you should be able to win a war of attrition against the levels of armour you'd normally expect to face in the arena.

Conclusion? The Crupellarius seems to be OK as a type. It's Victor's figure which is unlucky.