Fired up by the small skirmishes of The Pikeman's Lament, our group have been looking at a set of rules for larger 17th century battles. To this end we decided to give Baroque a go last night. It's an extension of the Impetus system, which a couple of members are familiar with; the rest of us would learn as we went along.

Gary put together a couple of armies from his collection; a lot of the figures were not correct in any way at all, but he managed Swedes (in the foreground) against Poles (background). 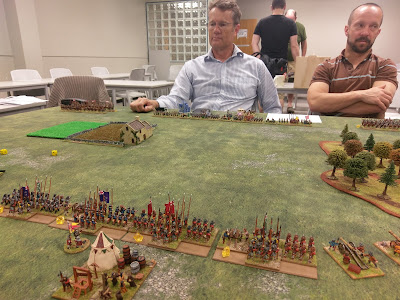 There was a lot of variety in the troops available; this Swedish cavalry command contained dragoons, a combined horse and shot unit and caracolling pistol-armed reiters. The opposing Poles were equally diverse. 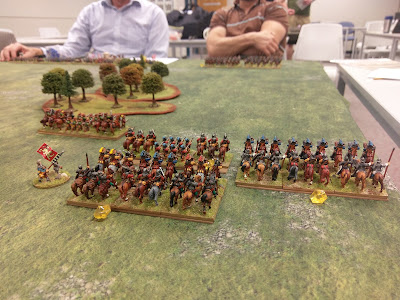 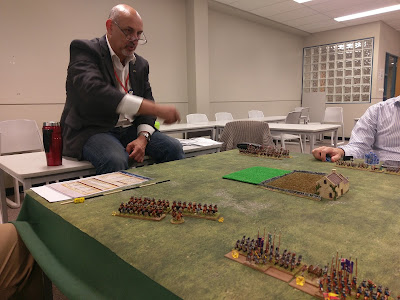 The infantry in the centre was much as you'd expect; pike and shot units, with some integral light guns (in the Swedish case) or supporting medium guns (for the Poles). 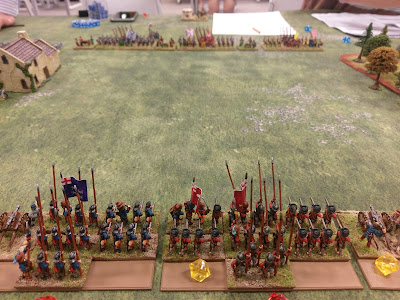 The first combats were on the Swedish right. The dragoons seized the woods to threaten the Polish flank, whilst the lighter missile-armed Polish cavalry rushed forward to engage. 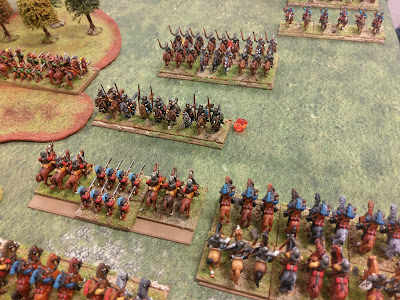 Some nifty firing followed by opportunistic charges saw the Poles disordered and routed. We quickly discovered that this was a system where, if you seized the moment, you could cause things to turn very bad for your opponent very quickly. 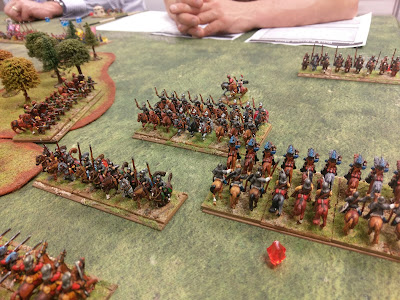 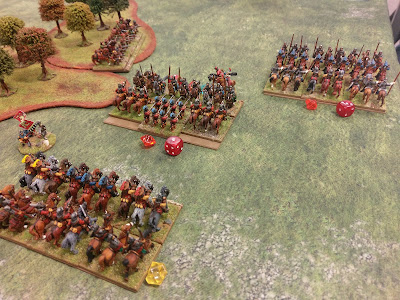 On the other flank JohnP launched a sudden, risky, attack on the Polish hussars with one of his units of trotters. Again, the cascade of responses, counter-charges ad pursuits took hold; the hussars failed to counter-charge, and were caught at the halt, which completely negated most of their advantages. They fell back and the Swedish pursuit took them into the second unit, which also retreated. Another pursuit saw both units routed. The Poles best cavalry were gone in virtually no time at all. Their loss collapsed that flank, and put the army's morale in jeopardy. 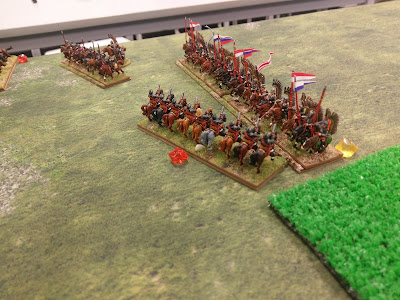 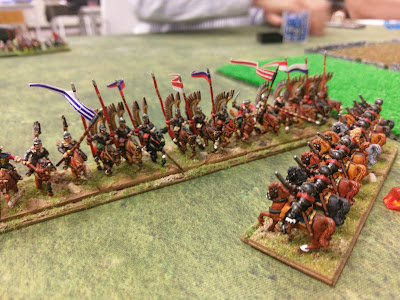 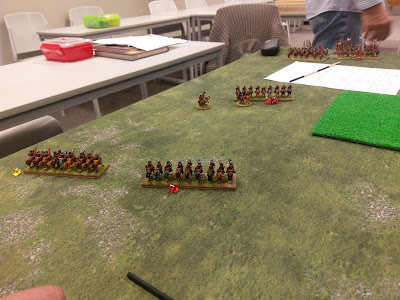 On the other flank a swirling continued melee was won for the Swedes when the dragoons rushed out of the woods to join the fray with clubbed muskets. The ensuing rout saw the Polish flank commander captured, and their whole army breaking. 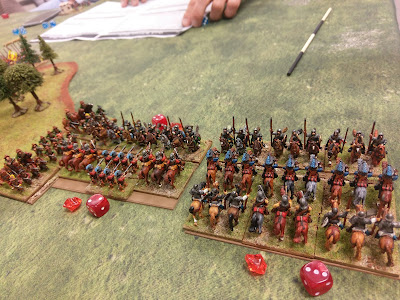 In the centre the infantry had barely advanced into artillery range, and now the battle was over. However we decided to spend the remaining time playing their action out as a separate game in its own right, just to get a feel for the way infantry combat worked, and to better understand the game's general mechanisms. 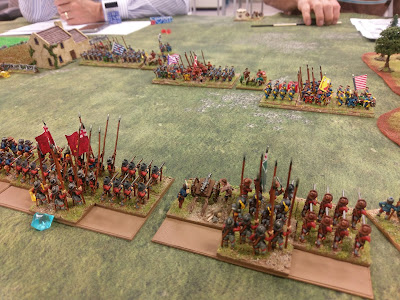 We soon learned that having the initiative is very important, and that because you resolve the actions of each unit in turn, the timing of your shooting and attacks is critical. Even deciding when to react to enemy actions is important. 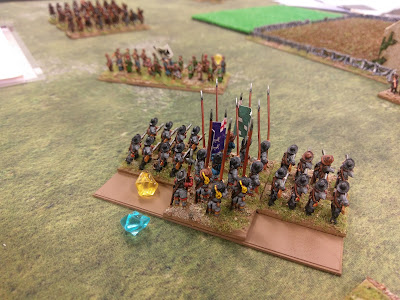 The Swedes initially had the upper hand in the infantry fight, mauling a couple of Polish infantry units as they advanced. But a sudden shift of initiative saw the Poles able to exploit an advantage they'd gained, and roll up the Swedish infantry line. The important thing was that we got to try and understand more mechanisms. 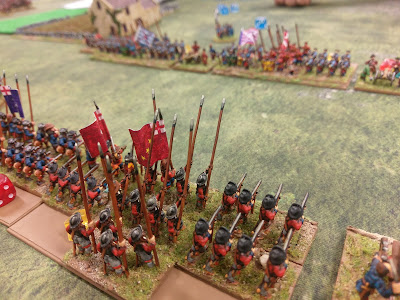 Overall we were impressed by Baroque. It has a lot of risk and reward; you can push units and risk disorder, or failure to act, but if it comes off you can make attacks that can collapse the enemy fairly quickly. I suspect that use of reserves to counter this is a key tactic. There's quite a few markers involved, mostly to keep track of casualties and disorder, but you have to remember which units have reacted, which commands have moved and even which special abilities have been used. This isn't too hard, but is worth noting for people who like a clean table. The rules seemed fiddly in places, but I suspect with further play things become more obvious. We had a fun evening, and I think that's as good a plus for a set of rules as you can ask for.

On the other table, Ralph and Daniel played Black Powder - something Napoleonic by the looks of it. 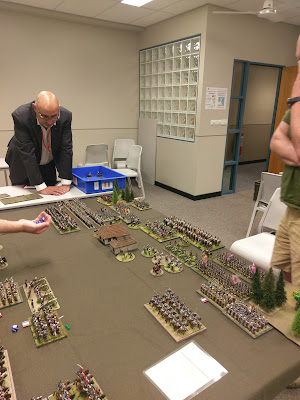 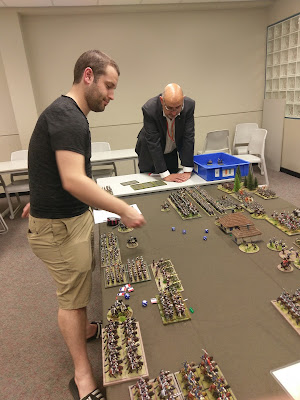 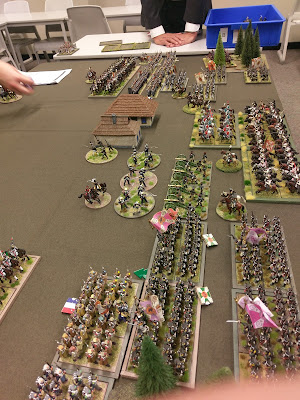 In addition Gary presented Peter with a trophy to mark his victory in our Maurice campaign. He felt it was worth marking the fact that we'd finished a club campaign; something we've never done before. 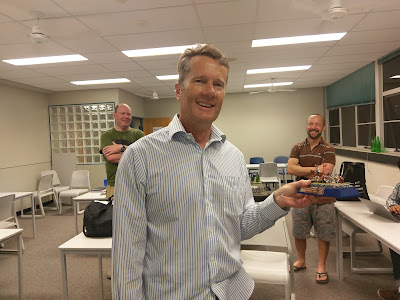 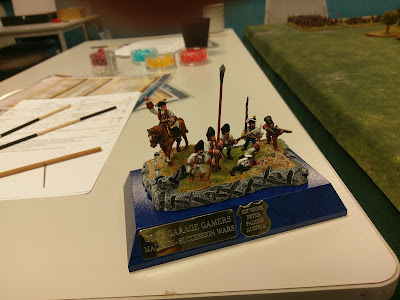