You know me; I like any miniatures game I can pretty much fit on a coffee table. So it was inevitable that, at some stage, I'd try to scale down Dragon Rampant. I've played it with HOTT elements a few times, so I kind of knew where I was going, but I wanted to see how small I could get a 'conventional' game down to. I have my reasons.

This was the playing area; 40cm x 80cm (an 8 x 12 50mm gridded cloth I made a couple of years ago to be exact). I randomised some terrain and positions. 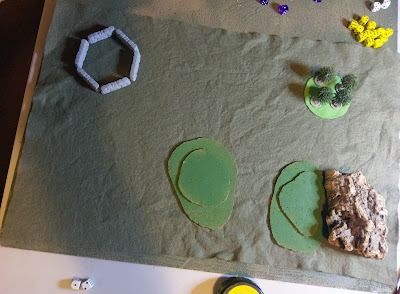 And the forces? They were 24pts each, made up from the 18mm 3D prints; the Spectral Host and the soldiers of the Temples of Syrinx. But whilst each unit had either 12 or 6 strength points, as normal, I only used six or three figures to represent it, thus giving them a much smaller footprint and making the most of the smaller playing area. I also switched all distances to cm.

I ended up with the Bloodbath scenario, and decided to make it interesting by requiring both sides to have two quests, and also requiring all units to enter from their edge rather than being deployed on-table from the start. Here's the Spectral Host entering. 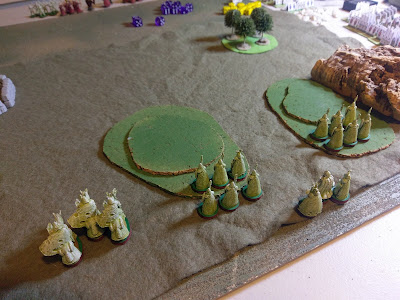 And the Temples of Syrinx. 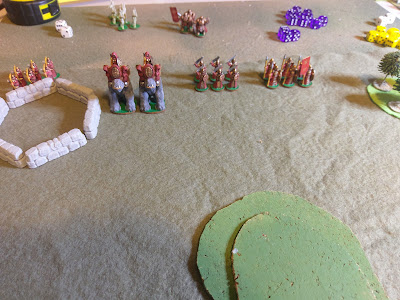 The approach. The big monsters (gronks) and undead cavalry were both Heavy Riders, but the undead had the fear trait as well. 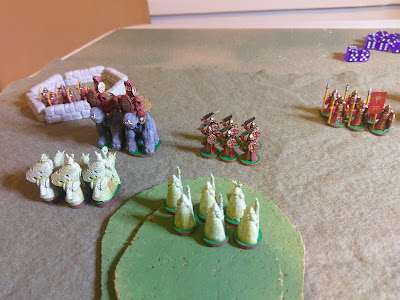 The Spectral Host grabbed the hills. Their foot were classed as Light for this game, so the uphill advantage would be useful. 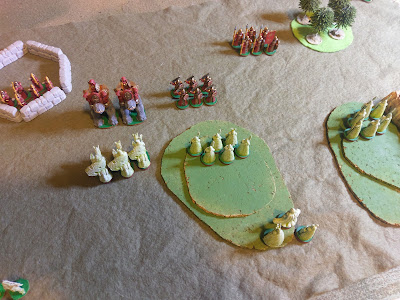 The cavalry engaged, and the gronks fell back in fear. 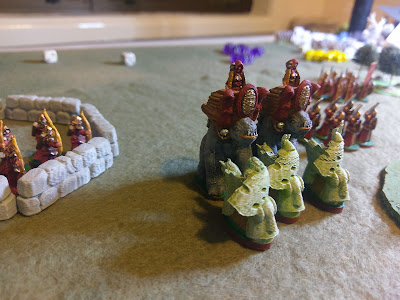 The Syrinx archers gave the Spectral cavalry a tough time, and they were then charged by swordsmen and failed to countercharge. 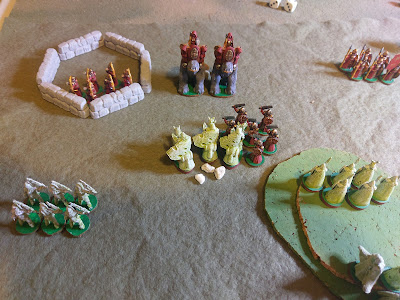 Elsewhere the Syrinx Knight Commander was trying to pin down some slippery banshees. 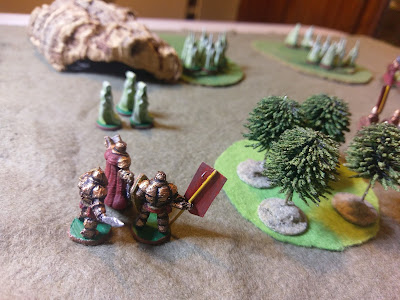 Undead warband engaged the archers, driving them back from their defensive wall. 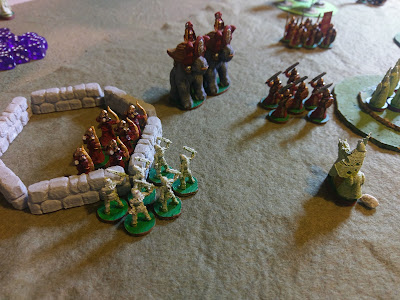 But the Syrinx forces were holding, and the Spectral Host was running out of steam, as its fragile units took more casualties. The warband failed to charge two turns in a row, and were wiped out by archery. 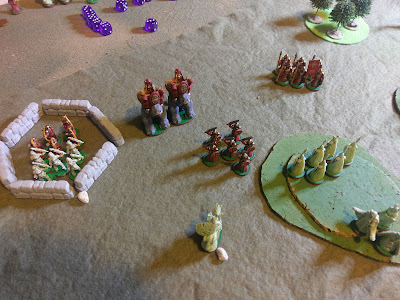 The spectral cavalry also fell, and it was left to the Wraith Lord himself to get stuck in. He was on a bit of a loser from the start, but did a reasonable job, wiping out the gronks and killing some swordsmen before falling to archery. 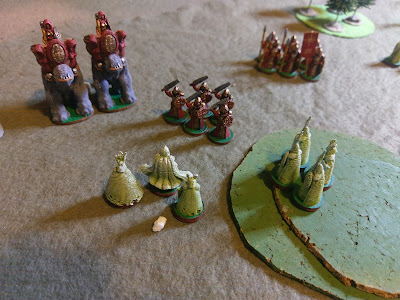 The foot on he hill ran soon afterwards, leaving the Spectral Host with a unit of foot and the banshees. Outnumbered and outgunned, I called the game at that point. The warriors of the Temples of Syrinx had achieved both of their quests and won the battle as well, to pick up a decisive victory. 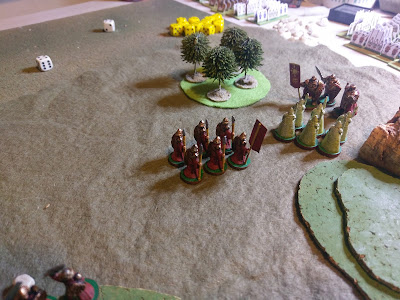 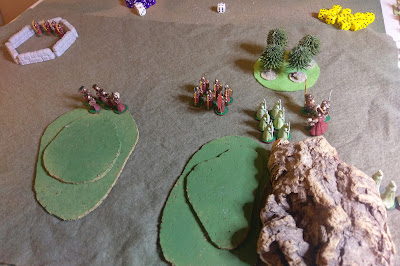 This was a useful exercise as not only was it my third Six by Six Challenge game this month, but it also tested out the setup for and playability of Dragon Rampant at this size ready for a possible public outing at a boardgames event this weekend. I wanted a miniatures game I could fit into the area of a boardgame, and which was also as portable (since I may have to carry it around town). The light plastic figures are ideal, and a small cloth and a few preselected terrain pieces would be no effort to carry either. The only difficulty I found was tracking the actual losses, since each figure is two strength pints; there's an extra level of mental arithmetic required which I admit was an effort this late in the evening. On the day I may keep the units at full strength in terms of figures, and use stones to mark all hits, making the morale calculations easier. The aim is for people to possible rock up and have a play themselves, so anything which makes the game easier will be good.