It's a wet long weekend, so we weren't keen to go out today. Instead Catherine and I played a couple of games of Battle Cry; one scenario, played twice and with us swapping sides, with the victory going to the best aggregate score. Most scenarios in theses boardgames are unbalanced in some way, so this method of play ensures a fair assessment of victory. Sometimes all you have to do is lose less badly than your opponent did.

Anyway, we played the Newmarket scenario, which is fun because it features two roughly equal forces, with one attacking the other. The Union have a decent defensive position, so should win, but the Confederates have six command cards to their four, so have the advantage of being able to put together a killer hand.

Here's the setup. Most of the Confederates are massed in the centre, whilst the Union are split between their right flank and the centre. On the Confederate right/Union left two equal forces of cavalry and horse artillery face each other across the bed of a stream. 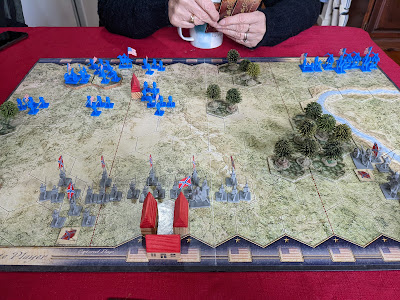 I played the Confederates in the first game, and started off with a strong advance in the centre. 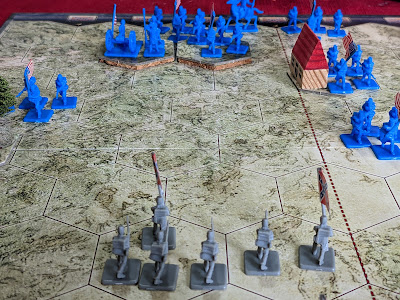 We both brought our cavalry in from the flank, and they fought on the edge of the centre sector. 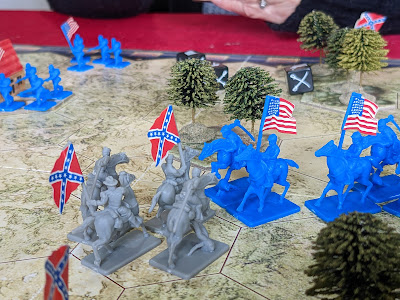 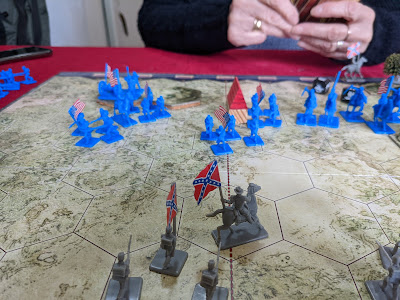 Breckinridge fell back to the relative safety of the VMI Cadets, whilst the Confederates advanced en masse. I managed to save up a decent run or cards to launch a strong attack on the centre, and this was the moment I started it. 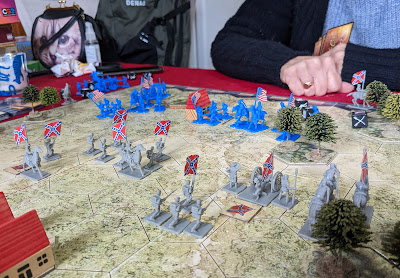 The end. I played the Battle Cry card and used the combat bonus to collapse the Union centre. I won 7 - 5 (Victory is six flags, but I destroyed two units on the last turn). 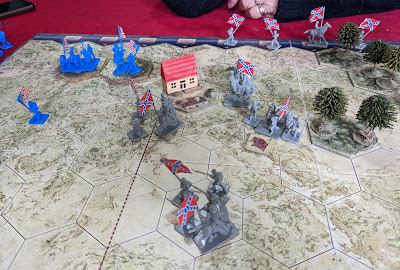 We swapped over, and it was something of a shock to end up with only four command cards. Especially when the only sector cards I drew were Scout cards, which meant I could only use one unit per turn for a lot of the early part of the game.

I reorganised the Union line into something a little stronger, but Catherine was already causing casualties with long-range fire as she edged forward. 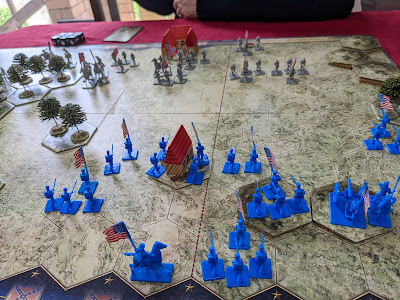 I pulled my cavalry into the main part of the battle, and used horse artillery to cover my flank there. Catherine brought up her cavalry in opposition. 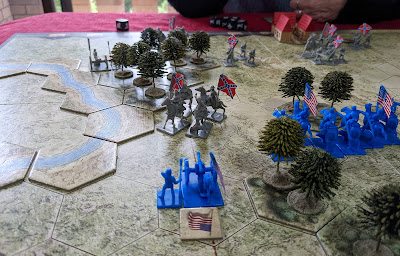 My position was strengthened with some hastily constructed field-works. This is always a good card to get when you're the defender. A series of melees saw my cavalry swept away, as well as the horse artillery. Some of my infantry stabilised that flank. 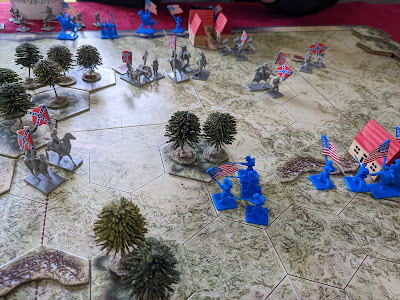 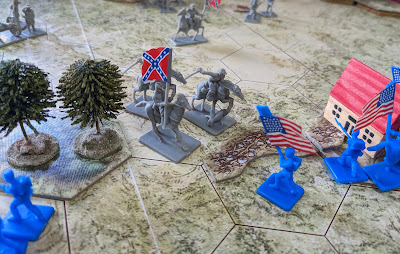 After my bad start I was able to use some cards near the end to pick off some weakened Confederate units, and ended up with five flags. In fact had Catherine not taken out that last Union unit I had a couple of long-range shots possible which could have given me my sixth flag and a win. As it was Catherine won 6-5, so the aggregate scores were 12-10 to me.

I rather like this scenario, but there's still plenty more in the book I haven't played yet.