I paid a visit to MOAB yesterday. It's the first time it's been held since 2019, so it was nice to be back.

Most of it was competitions. There didn't seem to be as many traders present either, although those that were there were interesting enough including Aetherworks, Olympian Games, Eureka, Slave 2 Gaming and a company which distributes independent games. There was one demo game (it looked like Team Yankee, maybe, but I didn't look that closely), and a couple of participation games as well, both of which were card/boardgames.

I played one of these; a card-drafting game called Cosmos: Empires. 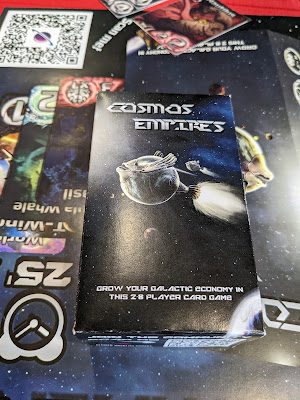 With an attractive epic sci-fi feel, the players purchase cards from a pool of eight every-changing options in the centre of the table, looking to maximise the revenue of their empire before their opponents do. Some cards act as multipliers based on how many cards you have fulfilling certain conditions, so the game is a balance between picking up expensive multipliers and collecting enough of various other card-types that those expensive cards bear fruit. You can also destroy cards in the centre to deny them to other players. It was a simple enough game, although I failed to grasp exactly what the victory conditions were until near the end of my first game. Despite that I managed to scrape a win, mostly via a lucky draw in the centre on my last move.

Here's the game at the end. 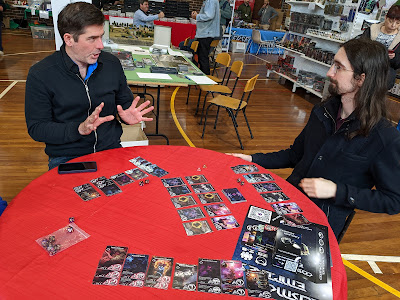 I played a second game later in the day, and was simply lucky not to come last in that.

Cosmos: Empires is a funded kickstarter, and will be available early next year.

I also played a card-game on the independent stall called Viewpoint: Revisioned, which is part of a series called the Viewniverse. It was amusing, but I only played two-player and I'm not sure the cut-throat nature of it worked so well. Maybe because it was my throat getting cut.

Anyway, this year's MOAB also coincided with the start of my Frocktober campaign for this year. Here's a taster: 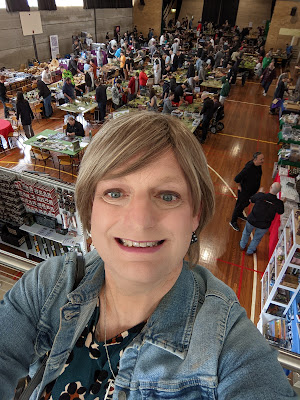 I'll do proper, regular posts throughout the month, but once again we've set up our usual team: IT HAS POCKETS
Oh! MOAB loot? I bought a can of varnish. I did turn down the chance to buy the Ogre: Ultimate Edition (the one that's the size of a suitcase) for $75 on the bring and buy, but as attractive as that looked I wasn't sure that, for the size, it was a game I was likely to play that much. I like it, but to the level of wanting to store a $75 suitcase. One day I know I will regret this decision.