The Dimachaerus in 'Blood, Sweat & Cheers' 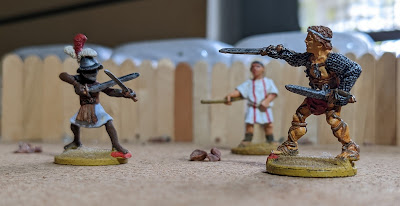 A couple of times in the past couple of years I have noted that I felt that the dimachaerus in 'Blood, Sweat & Cheers' seemed rather good, and in my last post about the game I outlined some of the reasons why.
Essentially a gladiator whose best defence is also their attack is difficult either to attack or defend without risk, and eventually the odds tend to catch up on the dimachaerus's opponent rather than the dimachaerus.
I played a few games over the weekend in odd moments, but also went back through my blog looking for any posts which features a fight between a dimachaerus and another gladiator. I noted down who won.
The dimachaerus seems to have a roughly 80% win-rate. This doesn't include my variants, but I did note in passing that ones with an Attack of 4 do very well.
So is there a solution? Well, maybe I'm wrong and the dimachaerus isn't unbalanced. If there are any 'Blood, Sweat & Cheers' players out there perhaps you may have some thoughts on this. Perhaps they always lose in your games and my issue is one of play-style.
But I have been looking at a possible solution (and have tried a couple of test games even). This is to simply fiddle with the gladiator's stats.
What I have done is drop the Attack from 4 to 3 and increase Defence from 2 to 3.
Unfortunately this does make the dimachaerus identical in terms of stats to the hoplomachus, and the game does do a nice job of making the basic stats for each of the ten gladiator types unique. But needs must, and all that.
The Glory abilities stay exactly the same.

I feel I can justify the 3 Defence without that much in the way or armour and no shield, by assuming that the second weapons is as much for parrying as it is for attacking. The extra attack potential of the second sword is covered by the Glory abilities, in the same way that most of the potential of the retiarius's net is.
After only a couple of test games I don't really have a feel for whether the change makes enough of a difference, but it certainly felt like the dimachaerus was working a lot harder, and that's good.
I did consider a small change to the hoplomachus, but I'm not rushing into anything here. Whilst their 2 x Glory ability is a good one, it can only be used once (they throw their spear). After that the gladiator doesn't have the option to use a 2 x Glory ability any more, which seems a little harsh. My thought was that if they play two Glory cards then they get the same basic effect as their single Glory ability, but with an extra of some kind; maybe a +1, or an additional knock-down instead of the push result. Something to think about, anyway.
Posted by Kaptain Kobold at 16:40