This has been a week for new card-games, what with the two I played at MOAB and now one that Maya wanted to try with us on our semi-regular Wednesday evening games session.

We played Ecosystem, which is a game about building just that - an ecosystem. Players are dealt a hand of ten cards, which depict one of nine animals or two terrain types. Animals include Bear, Wolf, Fox, Eagle, Deer, Rabbit, Trout, Bee and Dragonfly, whilst the terrain is Stream and Meadow. On your turn you play one card in front of you, then pass your hand to the player on your left. You then play from your new hand and keep going, passing on the hand each time.

Cards are laid in a grid, which is limited to four cards high and five wide, and must be placed adjacent to another card (aside from the first card, obviously). Initial placements can be fairly free and easy, but once you fill a row or column you've kind of set your grid limits. Here's our grids after ten cards. 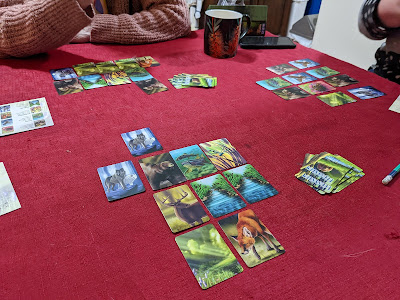 Once ten cards have been played you deal out another ten and play a second round, finishing the grid so that it contains twenty cards.
Here's our finished grids. 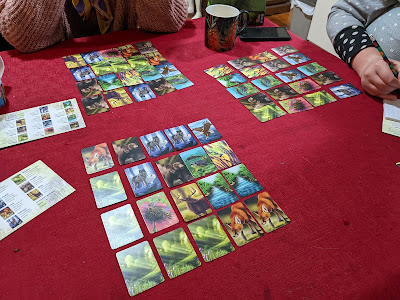 Then you score. Each type of card scores in a different way. For example a Bear scores for being adjacent to Trouts and/or Bees. Wolves score by you having more than the other players. A fox scores only if it is not adjacent to a Bear or Wolf. And so on. As you can see, building your grid becomes a tricky job of trying to maximise the scoring of each card you place, whilst leaving openings for future cards, the nature of which may not yet be known to you.

The last part of scoring is to check Diversity. Basically you gain or lose points depending on how many of the eleven types of cards you failed to achieve a core with. For example, if you only placed placed a single Fox, but it was adjacent to a Bear, then it scores zero, and counts against your diversity score. If you fail to place a Bee at all, again that would count against your diversity. In the grids above Maya managed to have all card types present and score with them. Catherine and I failed on one each.

Anyway, it's a simple enough game to play but interesting too. It'll be in our pile to take on holiday, for certain.

We played two games. I won both of them