Bailey and I played Blood, Sweat & Cheers last night. Bailey hadn't played before, but he picked it up reasonably quickly and we fitted in four bouts.
Here's Bailey displaying his poker-face. 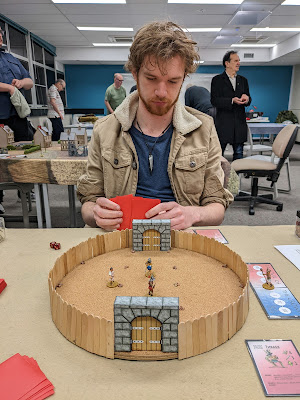 In the first game he took Alumnus the hoplomachus against Lucius the thraex. 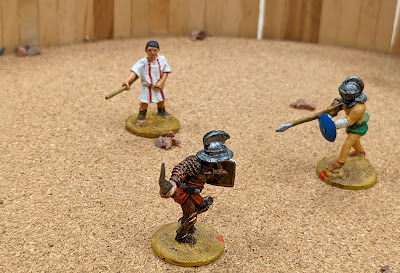 I find the hoplomachus a bit meh in BS&C, partially because all three of their stats are the same, and also because they are the only gladiator whose two Glory special ability is strictly one use only. Whilst the spear-throw can be a game winner, I don't think it's much more of one than some other gladiators' equivalent ability, and once you've used it you're left with a rather bland fighter whose single Glory ability really isn't much help any more since it's geared up for setting up the shot with the spear. Basically you get one shot at doing something interesting, and then you're left slogging it out with a very average fighter. I don't know - maybe the hoplomachus needs a little something extra.
Anyway, I digress. Bailey started slowly as we got used to the card-play. 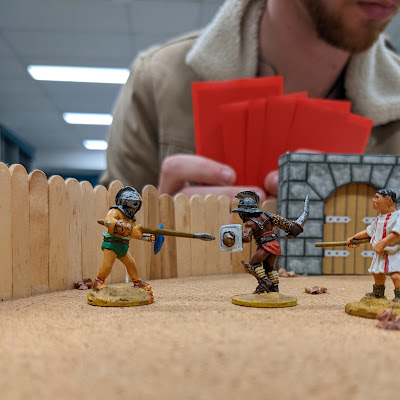 His spear-throw did knock down Lucius, but the wily thraex has already inflicted a few wounds by that stage, so the hoplomachus was slowed. 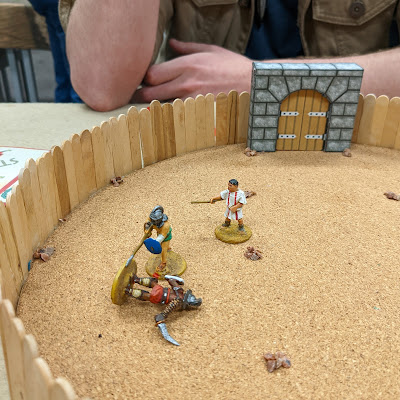 That said, Alumnus won the bout; a lucky 6-1 split on the dice saw Lucius run through and defeated, despite being the more popular fighter. 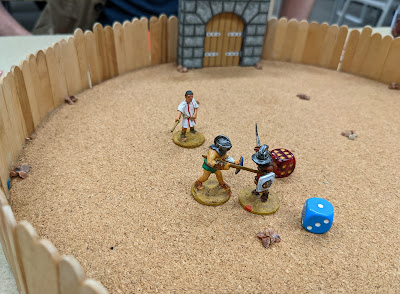 In the second game Bailey took Sylvania the retiarius, whilst I used the dimachaerus Lenia. 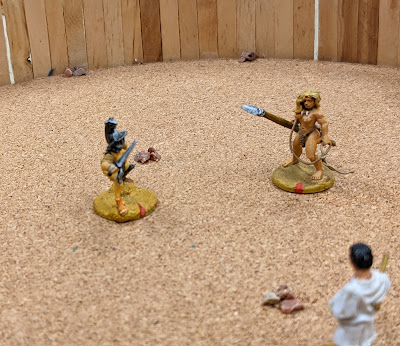 Of all of the gladiators in the game, I think the dimachaerus is probably the one that's closest to being over-powered. It has a high attack value, so as long as you keep getting a steady supply of Strike cards you get a chance to inflict damage on your opponent, plus since the attack value counts as your defence as well on that round, you can easily block counter-attacks. Whilst other gladiators often have to choose to attack or defend, the dimachaerus gets to do both at the same time. If they don't get Strike cards then they can be a little vulnerable, but not drastically so. And Strike cards come up fairly frequently. In addition the dimacherius has a powerful defensive Glory ability and a very powerful double Glory attack. I find they win far more bouts than they lose. 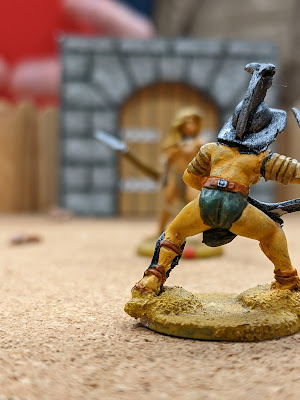 And that was the case here. Lenia easily took down Sylvania in a couple of rounds.
We played the bout again, and there was a bit more of a fight, but Lenia still won it eventually, ducking past the retiarius's lasso for the win. 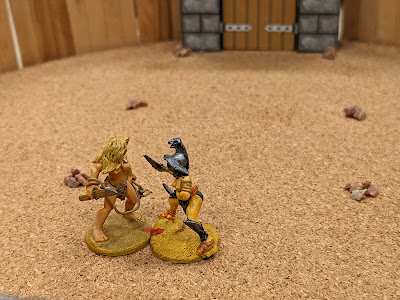 In the final game Bailey took the murmillo Mongo against the unarmoured (and very naked) dimachaerus Vocorix. 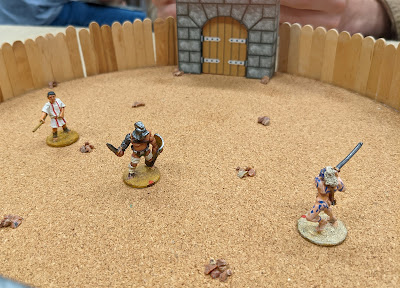 Mongo had decent armour, and blocked several attacks, but couldn't get past Vocrix's fighting ability. It was a decent fight, but in the end Vocorix prevailed, slicing off the murmillo's head (or so we like to think).
Here he is in his moment of triumph. Very. Naked. 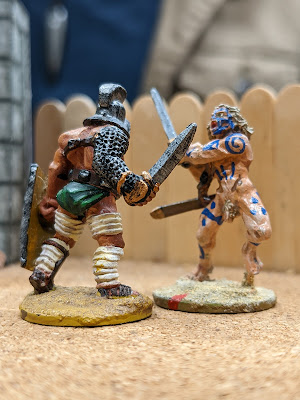 I'm loathe to tinker with the gladiators too much, but I think I might have a play with the hoplomachus and dimachaerus and see, firstly, if my perceptions of them are borne out in actual play and, secondly, if there's any viable changes I can make to them.
Posted by Kaptain Kobold at 11:10