Not being the kind of people to let a national day of mourning for our late, foreign, head of state stand in the way of an evening's gaming, four of us got together at the University on Thursday evening to play Gaslands. Actually I think two of us got together to play, whilst the other two played because it was the only game on offer and they were interested in giving it a go anyway.

I'd put together six teams, which we randomly assigned and then we set up a Death Race. Two of the players had never played before.

Bryan got a Highway Patrol team of Farewell To Kings and Miss Murder. Both had a few pursuit abilities and a machine-gun to the front.

Darren had a nice simple Idris team consisting of two black cars, Back in Black (with a mini-gun on the front) and the art-deco racer Black Dog.

Bailey ran a Verney team consisting of a bike (Snakecharmer) and a formidable truck with a digger strapped to the back (Bulls On Parade). The bike existed to generate shift results for the other vehicle via its sat-nav ability.

Finally I had an all-singing, all-dancing Maxxine team, consisting of the bulldozer Natural Born Killer and the ram-car Dreamline.

Here we are on the starting grid (which was perilously close to the edge of the table). Front row, left to right: Snakecharmer, A Farewell To Kings, Black Dog, Dreamline. Rear row, left to right: Miss Murder, Natural Born Killer, Back In Black, Bulls On Parade 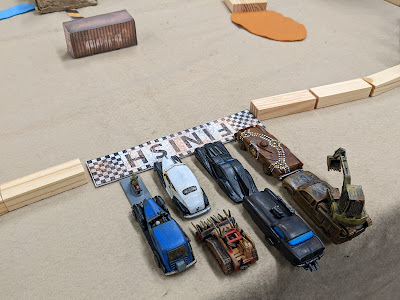 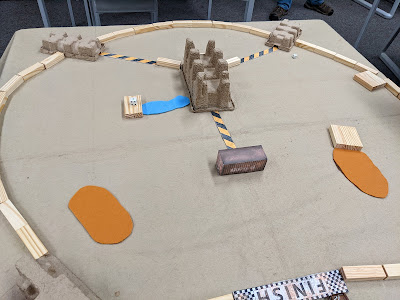 The start was a mess that set the tone for the rest of the race. Since everyone had to go wide and do a turn through the first gate, they all veered off in different directions and, quite naturally, got in each others' way. 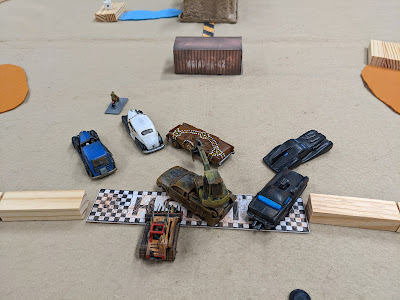 There were a couple of chaotic gear phases, but eventually a couple of leaders emerged. Bailey's bike got through Gate One first and started laying caltrops, chased by A Farewell To Kings. 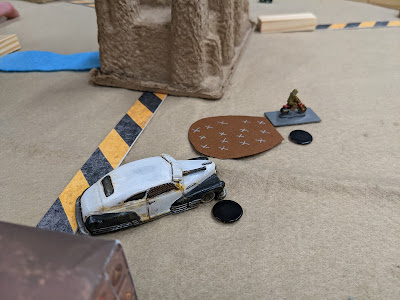 Back In Black was coming the other way. It didn't have armed weapons yet, but Darren discovered that he loved ramming things as much as shooting them, and steered straight for the bike. Snakecharmer evaded the worst of it, however. 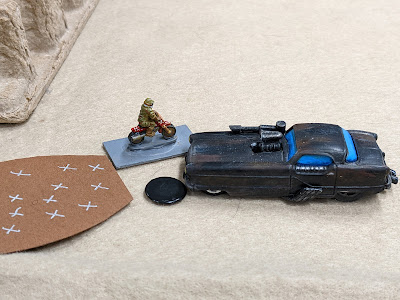 Chaos at Gate One. Miss Murder and Dreamline were badly out of position, whilst Darren had both of his black cars through. Bailey took Bulls On Parade through the gate, and had taken Snakecharmer through Gate Two. 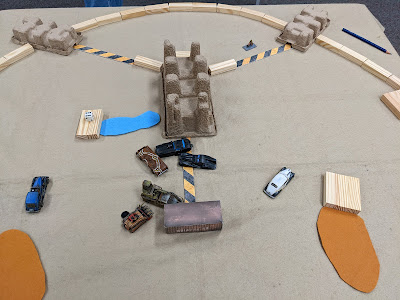 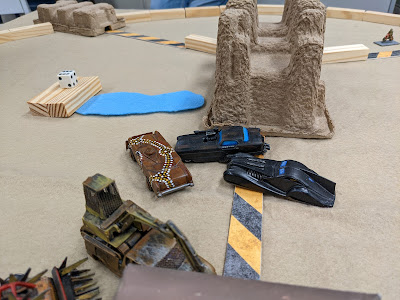 Most of the vehicles cleared the gate, but I couldn't resist crossing in style, ramming Black Dog with Natural Born Killer. 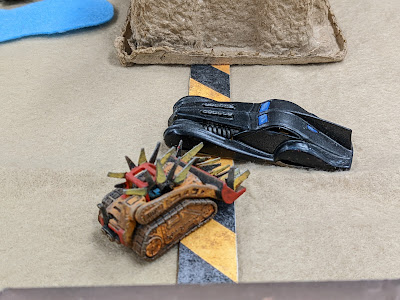 Miss Murder and Dreamline were still both trying to get into position to make a run for Gate One, but Darren's cars were very much in the way. 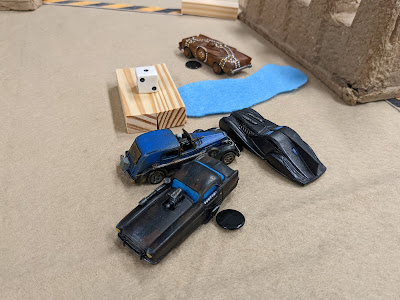 The photographic record petered out at this stage, since there was a lot of racing to keep track of and I was doing a lot of work keeping the players on top of their team abilities whilst consulting the rules. Dreamline managed this rather deft ram, which would have been more spectacular had I rolled any decent damage. 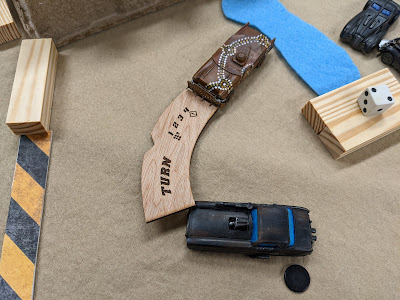 And I slid and spun Natural Born Killer into this delicious ram attack as well. 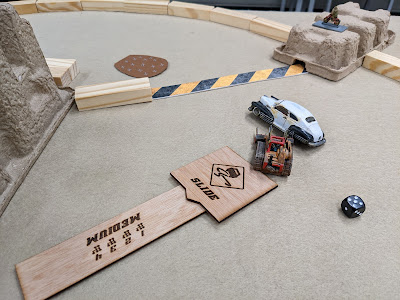 In the background of that final picture you can see Snakecharmer positioned on the wall near Gate Two. The bike had run foul of Back In Black's guns, and been wrecked, and this would be its potential respawn position.

So what happened afterwards? Bailey managed a spectacular move with Bulls On Parade, dropping mines and caltrops to the side and then wiping out such that he spun spun into them. That was funny. Darren's reckless, high-speed driving eventually saw both of his vehicles wrecked, although he was well-positioned for a respawn. The various wipe-outs and crashes were giving Bryan's cops plenty of Audience Votes, which would have given him a lot of influence in the end-game. And I was simply trying to pass gates, slowly and steadily.

With time ticking on we called it a night about two-thirds of the way in. I think Darren stood a good chance of a win, since he was well-positioned with his forthcoming respawns. Bailey could have won with his respawned bike, but to do so had to lose his other vehicle first. And it was built to last, so was difficult to kill even if you wanted it taken out. With all of his Audience Votes, and a more cautious approach to driving, Bryan could also have pulled off a surprise win. Anyway, we called it a draw. No-one really cared about the result anyway, because we'd all had a great time playing the game.