Here in Wollongong we're currently hosting the biggest sporting event the city has seen, the UCI 2022 Road World Championships. With a ton of the world's top cyclists in town, it seemed wrong not to get out Flamme Rouge for a game.

But which course? Well, why not the one for the elite road races on the last couple of days of the event? Most of the events are using a short circuit around the centre of the city, but this coming Saturday and Sunday will see the Elite Road races, which are much more interesting in game terms.

Here's the map for the womens' race. They run down the coast on the blue route into the centre of Wollongong, do a single anti-clockwise loop of the red section (which is a climb and descent of Mount Keira) back into the city, then do a number of circuits of the green route - six for the women and twelve for the men. 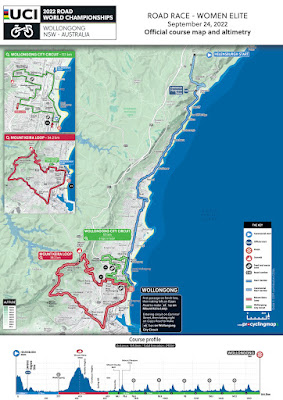 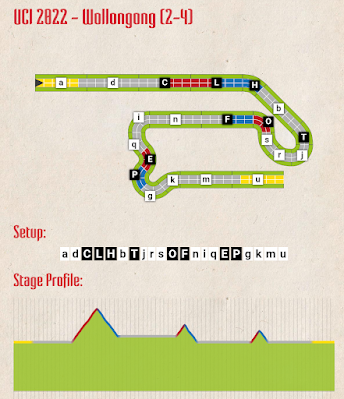 The first third is the run along the coast (the blue line on the official map) and the climb and descent of Mount Keira (the red part of the official map). That's up to section H on the game maps. The remainder is the city circuits. These include a small climb and descent. I couldn't replicate the six or twelve iterations of this, so settled for two small hills instead to create the necessary terrain to break up the pack a little. As per the Peloton expansion, the 5-6 player map also includes a supply zone and the extra '9' tile.
It's not a particularly unusual course, but it's as close to the original as I can get.
Last night Catherine, Maya and myself gave it a go. Catherine was pink, Maya green and I was white. We ran a black peleton bot team as well. Maya has only played the game once and (if we're being truthful) is not a big fan of it.
Here's the course, ready to go. I've recently acquired the Meteo weather expansion for the game. This adds the possibility of wind and rain on some of the straight sections; in our game the final climb and the descent of Mount Keira were subject to a crosswind (which prevents slip-streaming) whilst on the run to the finish line the riders would have a helpful tailwind. 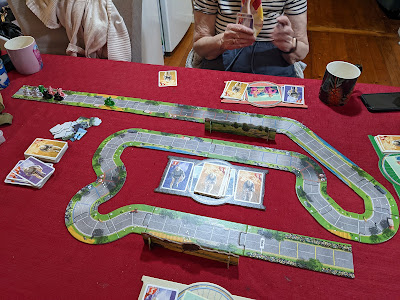 The expansion doesn't mess around with subtle markers; this is the crosswind standee next to the relevant straight. As with everything in Flamme Rouge the art-work has a 30s period style and is gorgeous. 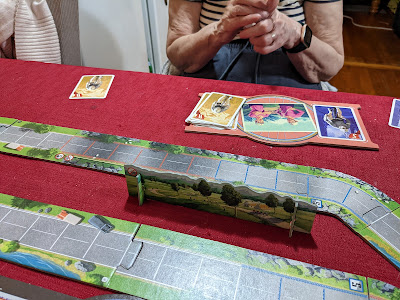 I won't bore you with a blow by blow account. Here's the riders on Mount Keira. The bot had a nice lead, with Maya's team in close second. Catherine and I were biding our time at the back. 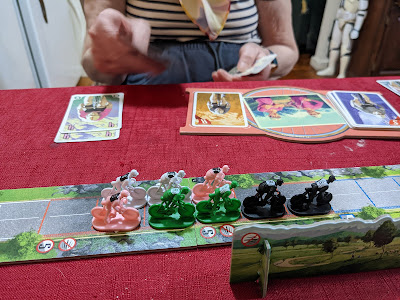 The positions had changed a little as we went into what was effectively the first of the two trips around the city-centre 'circuit'. Heading into the first run at the small hill I was in the lead with Catherine close behind. However I'd contrived to get both of my riders to the front of the pack. 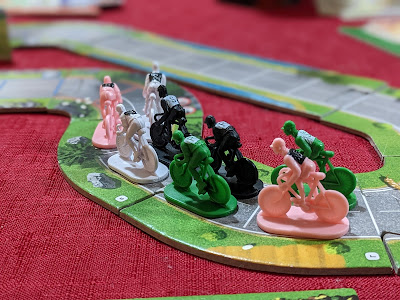 The first small hill climb broke up the pack, and I took the chance to make a break for it with one of my riders. Catherine was savvy enough to anticipate this and followed me closely. My other rider looks like he's been left behind, but actually had some decent cards left with which to pull off a sprint finish. 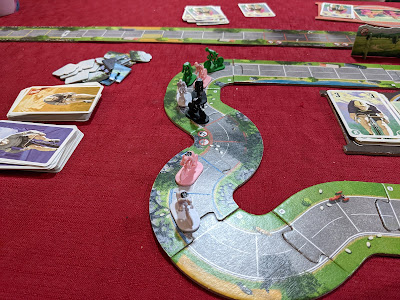 Whilst the main pack completed the second small hill section, Catherine and I sprinted for the finish-line, picking up that helpful tail-wind. 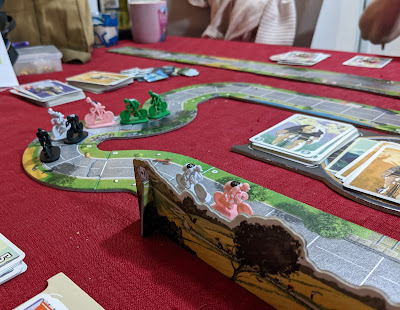 And across the line we went. Catherine just managed to pip me to the post on the last turn to pick up the win, but in team terms I managed to do better, getting both second and third place. The black bots finished in the middle, having failed to use their aggressive attack ability at any stage, and Maya had lost it a little on the final hill and got left behind in last place. 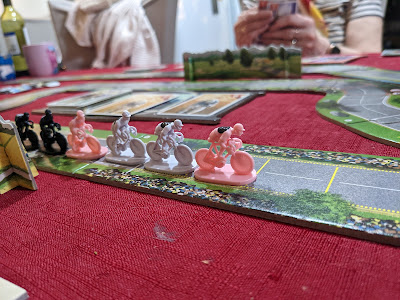 So whilst this isn't one of the most exciting circuits I've used for the game, it was fun to simulate (in a way) a local event and play on a course where you could relate to the geography.
I live about 20 minutes walk away from the end of the descent of Mount Keira, so will probably pop down and try and get some photos of one or both of the elite races at the weekend. Maybe.