Shock horror! Our normal room at the University was locked last night (something to do with exams), so we ended up having to use a meeting room in the Metals and Materials Science bit of the building. So our backdrop was a shelf of books on metals, crystals and all sorts of other interesting sciency stuff.

Our feature game was a Maurice doubles. Four of us each had an army of a different style - Caesar and I, representing a Riskovian/Confederation of Tea States Alliance, attacked John and Ralph, representing an alliance between Albion and the Duchy of Sans Couleur. We used one deck between us, with plans to cycle through it more than the three times

Here we are setting up. One again a lot of the figures were my still unpainted garish Risk plastics. However both Caesar and John have growing collections of painted metal figures. 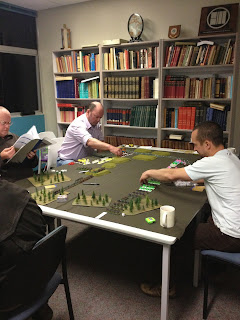 My army featured lots of cavalry. Including elite Guard cavalry. This will come as no surprise to most people. 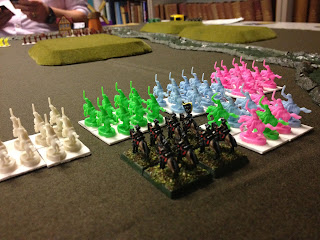 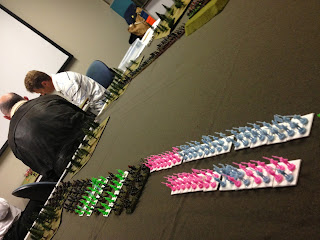 The other game - Peter and Geoff played DBMM. Or something of that ilk. 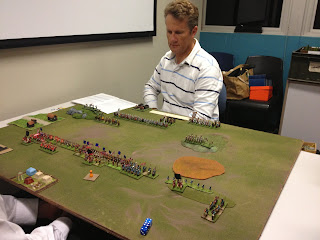 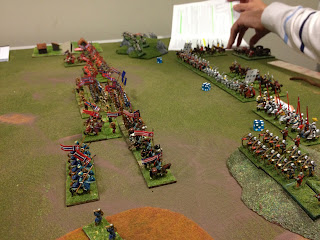 Caesar had Bayonets and En Masse as his national advantages, and pushed his infantry forward rapidly to engage John's line. This was odd, because he then stopped and tried to engage in a firefight, whilst the rest of us just looked baffled. 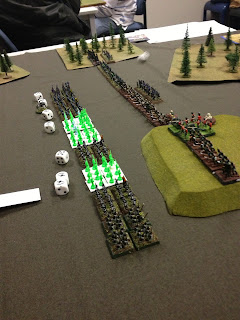 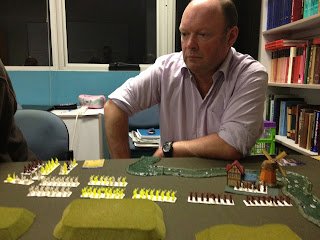 Fisheye shot of our temporary venue. 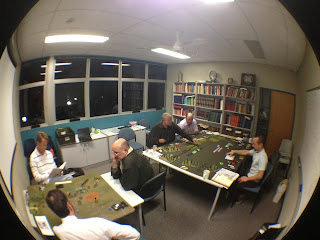 And a widescreen shot of the overall game. I have lenses for my iPhone, you know. 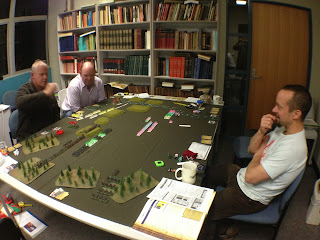 Another widescreen shot. Whilst Caesar had pushed a limited part of his army forward rapidly, and got stuck in (in a bizarre kind of way) I was advancing steadily, trying to keep my infantry, cavalry and artillery together. However, as I said, my infantry were only there to provide a vulgar brawl to which my cavalry could lend some dignity. Ralph adopted a defensive posture behind some hills, so whilst Caesar and John exchanged musketry turn after turn (and rallied a lot), our two armies saw very little of each other. 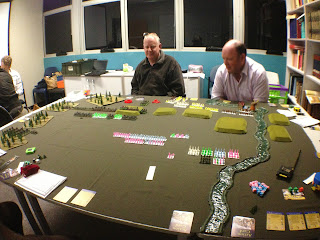 Caesar had some cavalry as well. Irregulars. They spent the whole game hiding in a wood looking attractive. 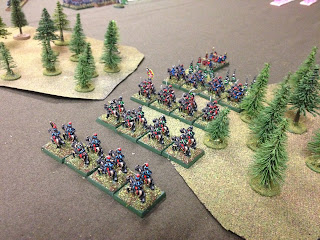 Ralph pushed a few units of cavalry forward in order to tempt my artillery into shooting. I didn't take the bait. Instead I advanced my infantry, hoping that covering Caesar's flank might encourage him to actually attack. With Ralph's cavalry threatened to the front I swung some of my many cavalry units around to threaten their flank. Things were looking good. 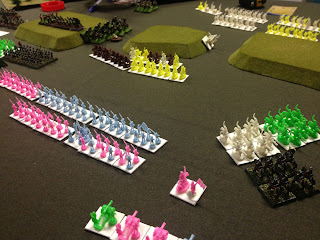 Some action in the main fight - one of John's infantry units got confused, and retired through its supports. Maybe this was the opportunity Caesar needed to launch that long-awaited bayonet assault? But wait? That patch of white marsh wasn't on the map! (We didn't have any spare terrain of a suitable size so used a couple of measuring sticks) 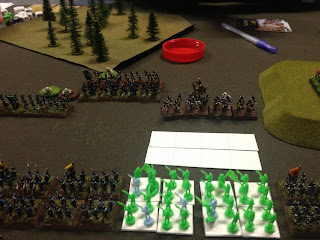 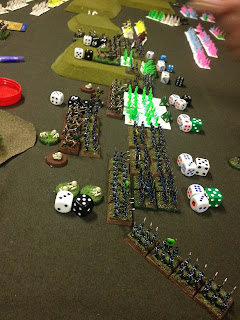 And that was it. He didn't make any major breakthroughs, and ended up repulsed with a number of his units looking very shaky. The next turn would probably see some of them break, but we'd run out of time - the firefights between Caesar and John had used up a lot of the gaming time. Ralph and I never got to grips.

Playing doubles was interesting, but I think we needed a more coordinated plan. Caesar and John's side of the game quickly bogged down, whilst Ralph and I were able to complete our parts of the turn very quickly. I think I would have liked Caesar to have held back a little, perhaps. And sitting in front of a firing line in column didn't seem the best plan; the ability to rally in Maurice seems to offset a lot of the advantages gained by shooting your way into combat - when Caesar went in he'd gained virtually nothing from several turns exchanging fire. My plan was to advance all of my troops together, as far as possible, before launching any attacks. But with infantry, cavalry and artillery that meant three turns of march moves for each step forward. This could play quite quickly (especially as Ralph was content to pretty much sit and wait for me, at least initially), but not with the other side of the table engaged in combat every turn.

We're playing Maurice again in a few weeks, possibly as part of a mini campaign, but I'm not sure if it's doubles or a couple of one-on-one games. Maybe I'll get to shoot or charge something this time.