Hero Defeated - And Some New Gladiators 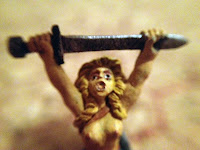 In my previous post I outlined the career of Hero, the luckiest gladiator alive. Nine fights, nine wins and eight dead opponents.

This evening his luck ran out. In his tenth bout he was cut down by a barbarian with a great big sword. Killed stone dead. Battered to the ground and his head cut off.

Mind you, his ghost had the satisfaction of seeing his killer defeated in the next fight, by another Murmillo. sadly the crowd were with the barbarian, and spared her on appeal. Small satisfaction for Hero, but still satisfaction.

Here's the death of Hero. 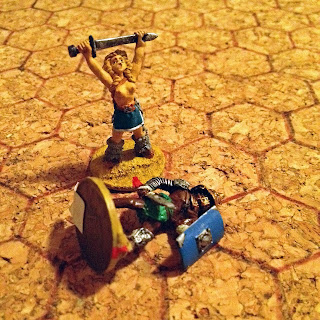 His opponent was one of the Shadowforge figures I finished painting today, bringing my gladiator accumulation up to 67 figures. I think that's it though - I don't have any unpainted gladiator figures around now - I shall have to buy some more. I rather like the look of the Crusader ones, but I shall hold out for a stronger Aussie dollar before ordering them.

Anyway, here's the new additions, although the photos aren't that hot. Being Shadowforge all of the figures are female. In fact I think about half of my gladiators are female now. This may offend purists, but I'm not worried. I have been mixing genders in the arena for years now, and don't plan on stopping any time soon. Anyway, I find it appropriate in a way.

The first ones are all light gladiators. One of them is armed with a thraex and has a small shield and some armour. The other two aren't really gladiators; they are from Shadowforge's Viking range, but make good barbarians. One is the lady who defeated Hero - she has no armour, but carries a two-handed sword. the other has a large shield and carries an axe. 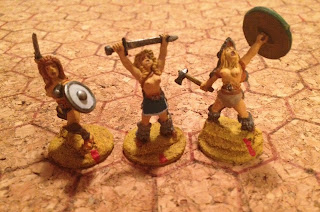 These are more conventional gladiators - two have large shields, helmets and armour and fight with a sword. One is armed and armoured as a Greek hoplite (this is a lovely and striking figure). The final one is unarmoured and carries a bow. 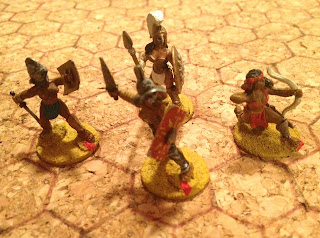 The final three - a Dimacherius, another Murmillo type and a Thracian. 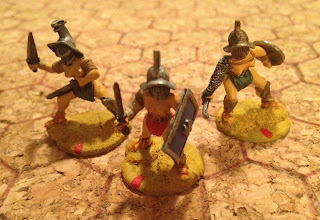