As part of my gladiator ramblings of the last week or so I have been pondering some modifications and additions to 'Munera Sine Missione'. Nothing I'm going to rush into print with any time soon (so you can assume that the current version is fairly stable), but some interesting ideas worth pursuing. I'd discussed them with Victor via e-mail, and he said that since he was free this evening he could come down from Sydney and we could test out a couple of them.

What we wanted to try was an adjustment to the way the Bash weapon ability works (to make knock-downs harder to achieve on some gladiators and easier to achieve on others), and a completely optional add-on rule to make use of Victor's referee figures.

We used Victor's lovely arena as the setting, which is why the photos look so classy.

Some Bash weapon testing - a gladiator with a two-handed axe fights a barbarian with a large shield and hand-axe. The latter is treated as a sword on MSM, but the large shield has the Bash ability. 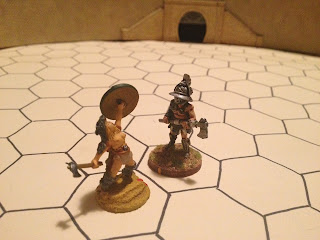 In this bout the knock-downs seemed to be kept to sensible levels, and the two-handed axe wielder was eventually tripped up and forced to appeal to the crowd. They spared him.

Winner stays on! The Barbarian faced a Secutor next. He proceeded to lose his shield, whilst she managed to break her axe. 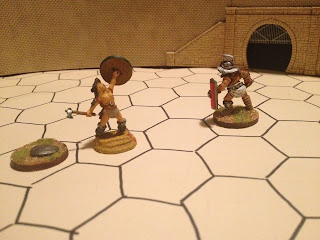 They circled around for a bit ... 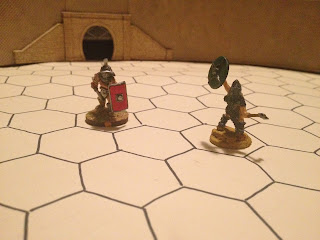 A sudden rush from the Secutor saw the barbarian knocked down by a sword blow, then knocked down again by a shield attack, forcing her to appeal. The crowd didn't spare her. 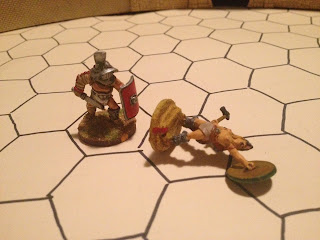 Victor's Secutor stayed on, and I used one of my new Shadowforge gladiators - the Thracian. For this bout we decided to try out the referee rule. 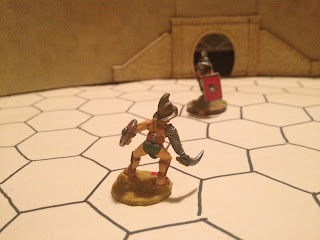 And here he is - the ref. Because he costs AP to use he is an interesting way of using the odd AP that gladiators are often left with. 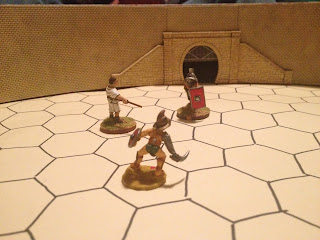 The referee figure has no effect except to block movement through his hex. Either gladiator can spend an AP to move him, however, so he is essentially a piece of mobile terrain. You can use him to cover your flank or restrict your opponent's move. Victor managed to keep him on his sword side, preventing attacks on that more vulnerable arc. 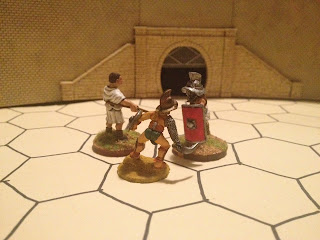 This was a very, very long fight. Several times Victor hit my Thracian, only for her armour to block the blow. He was wounded a couple of times. 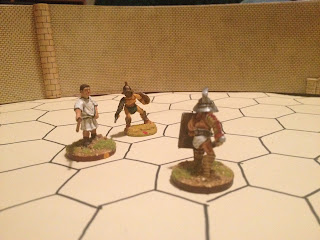 Then things got really complicated - the Secutor dropped his shield, then lost his helmet. But my Thracian broke her sword, and had to resort to attacking with her small shield. She even lost that at one stage, but recovered it. 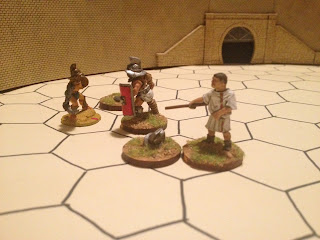 With both gladiators exhausted the fight became a brutal slog. The Thracian emerged victorious, though, producing an automatic wounds critical that quite convincingly killed the Secutor - she must have taken his head off with the edge of the shield. 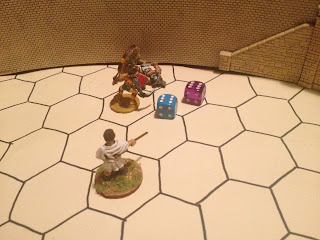 After that fight we decided the rules need a mechanism for fights being stopped and called a draw. We'll work on it.

The Thracian stayed n, and Victor switched to a Hoplomachus. We used the referee again, as he'd been a lot of fun in the last game. 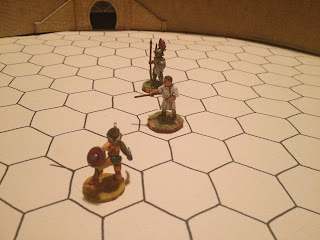 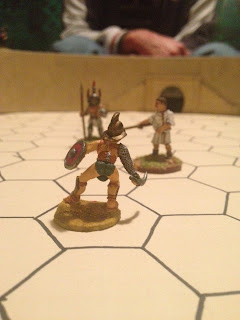 After circling the ref, the two gladiators closed - and the Hoplomachus tripped and was dispatched. A very short bout ... 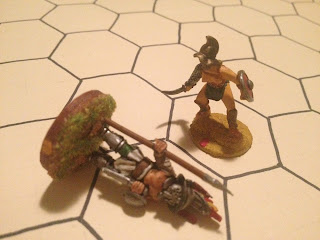 We played a rematch, without the referee, but with an alternative card-based activation system Victor has been working on. It worked very well. Whilst it's possibly not what I'm looking for as a permanent addition to the game (it adds an extra component, which is something I'd prefer to avoid), it did make for an interesting fight, and would make a fine optional rule for the game. The Hoplomachus lost again, as he was slowly chopped into little bits by the Thracian. We came up with some modifications to the card  system, which we need to discuss further.

Victor then showed me a set of rules he'd been working on for using Pugiles. It includes some elements of MSM, but is really a game in its own right, with the boxers adopting fighting stances and trying to outwit and out-maneuver each other. I need to read it through. We also discussed some ideas I have for changes to the way missile weapons work, as well as an idea for allowing gladiators to work the crowd, gaining advantages from their favour.

As for the title of this post, it is based around an observation Victor made about what attracts viewers to a post. Gladiators. Girls. Boobs. We reckon it's a potent combination.
Posted by Kaptain Kobold at 06:00