Meet Hero. He's a gladiator (obviously). Light armour, an enclosed helm and a big shield. Well-protected, but not fast. Armed with a sword. And utterly awesome. 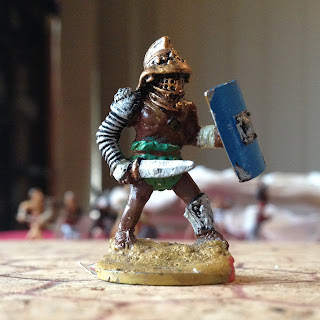 The thing with 'Munera Sine Missione' is that it's easy to play solo. There are no written orders, it has a alternate move sequence and none of the game information is hidden. This makes it easy to swap from one side to the other, and make sensible game decisions for each gladiator. Sometimes I like to pick a couple of gladiators, fight a duel, then leave the winner on to face another, suitable opponent. In this way I get to work through my collection of figures, trying them out. And I have a lot of figures (about seventy, once the latest batch I'm painting is done).

That's what I did the other day. I started with Hero and a matched him against a light gladiator armed with a sword, small shield and light armour. He won. He then beat a retiarius. Then another sword and shield gladiator.

In fact he has now won nine consecutive bouts. He's beaten four retiarius, a dimacherius, three sword and shield gladiators and a Nubian barbarian. This picture shows the ones he's killed. Yes, killed. Either he mortally wounded them, or the crowd wouldn't spare them. One retiarius was defeated after he beat him to death with his bare hands - early in the duel Hero lost both his sword and his shield, but that didn't seem to stop him. 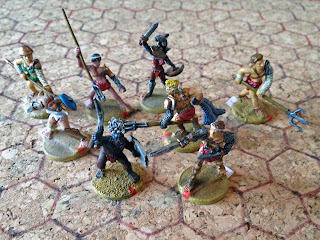 This man is lucky. He lost to Hero, but lived. Maybe one day he will have his revenge. 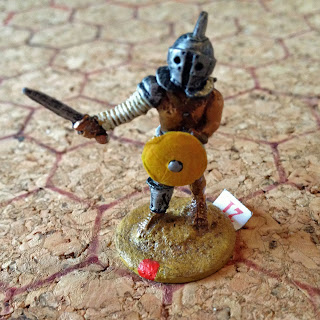 Who will defeat Hero? Will I run out of figures before Hero runs out of luck? Who knows ...