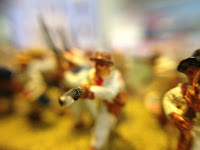 I have been reading exchanges various recent posts on Bob Cordery's 'Wargaming Miscellany'  and David Crook's 'A Wargaming Odyssey' about how to better reflect both quality and numbers in the simple 'Memoir of Battle' games they have been pioneering. I have some reservations at present about the effects being too extreme in a game with low granularity in terms of the ability to change factors, but I shall follow the discussion and read the playtests and see what comes out of it.

It got me thinking about my own 'Struggle Against Everything and Everybody' (SAEaE) rules for the Mexican Revolution. These are based on one of Bob's sets, so changes and ideas proposed for them are potentially applicable. Having a few games of it under my belt (or bandolier) now I wondered if it could stand a few tweaks on similar lines to those proposed by Bob and David.

One issue I am thinking about at present is the relationship between a unit's strength and its combat capabilities. At present the 'Memoir of Battle' rules that Bob and David are trying use strength to reflect how many 'hits' a unit can take, with adjustments for quality - an infantry unit has a strength of 4, for example, but an elite unit may have a strength of 5 and a poor one a strength of 3. Their combat capability - how many dice they roll to score hits - is, however, unaffected by the strength. An infantry unit always rolls 4 dice, whether it is a full strength elite unit with 6 hits, or a poor unit close to breaking, with only 1 strength left. The Morschauser system, on which SAEaE is based gives units a strength, but that also dictates how many dice they roll when in combat; as a unit takes casualties it's fire-power decreases.

I am beginning to wonder if both methods are a little extreme. The first has units fighting at full strength until they are destroyed. The second has units degrading very rapidly as they take casualties, and their fire-power going down by a significant percentage.

In reality, such as it is, units generally don't fight to the last man; at about 15-20% casualties they are ready to give up. High casualty rates tend to happen when lots of units give up at once and the army routs, but for most games we play that's the aftermath, not part of the game itself. So for an infantry unit with an (arbitrary) strength of 4, each 'hit' doesn't represent 25% of the unit being put out of action; it may only represent a 5% loss. To this end there is something to be said for the Memoir method of fire-power being relatively unaffected by casualties; each hit doesn't represent 25% of a unit's fire-power being lost.

Morale is a different matter. If we assume a 4 strength unit 'breaks', and is lost, when all four points are lost, and that this represents a loss of about 20% of its strength. Each hit could, potentially, be degrading its morale by 25%.

So, how can I apply this theoretical (and probably inaccurate) rambling in SAEaE? When cobbling it together I pondered which method to go for - Memoir or Morschauser. I went for Morschauser, partially because the saving roll mechanism gave me more flexibility in terms of applying terrain and range factors in the game. The discussion above leads me to the idea that I could use a mix of both systems.

In SAEaE I differentiate between shooting and close combat., using slightly different mechanisms. Even at one square range a unit can choose to sit tight and shoot, or charge in with sabre, machete or bayonet*. The former is a low risk strategy, which may take time to bear fruit, whilst the latter offers a big win at the risk that you could suffer if things go badly. My assumption is that shooting is based very much on the actual strength of a unit - how many guns it can bring to bear - whereas close combat is based on morale - a unit's willingness to charge against its target's willingness to stand in the face of a determined attack.

So here's what I will try.

Units still have a base strength value. This directly equates to their fire-power - the number of dice they roll when shooting. This doesn't vary significantly with casualties. It's also used as an initial measure of the unit's willingness to fight. This value does go down as the unit takes 'hits'.

So instead of Strength units will have Firepower and Morale. These start with the same base values; 4 for Infantry, 3 for Cavalry, Artillery and Machine Guns. Elite units add 1 to Morale (only), Poor units subtract 1.

Firing: A unit rolls dice equal to its Firepower. If a unit has taken any hits, subtract one from the number of dice.

Hits: Hits are taken on the units Morale value only. When it reaches zero the unit is removed.

Example. A Poor infantry unit has a base strength of 4. It's Firepower is 4 and its Morale value is 3. When it shoots it rolls 4 dice, but in close combat it only rolls 3. It takes 2 hits. When firing it now rolls 3 dice - a base of 4 with a -1 modifier for having taken hits. In close combat, though, it only rolls 1 dice; a base morale of 3, -2 for the hits. One more hit will destroy the unit.

I will try this out in the next couple of games, and see how it works.
*But not lance. Apparently the Mexican Revolution didn't see much in the way of lancers.
Posted by Kaptain Kobold at 09:00

Email ThisBlogThis!Share to TwitterShare to FacebookShare to Pinterest
Labels: general, mexican revolution, struggle against everything and everybody