Saturday Afternoon On The Somme

Well, I reckon producing two armies from scratch and fighting a battle with them in 24 hours is reasonably impressive ...

On Thursday evening I downloaded a collection of two-page wargames rules from the Panzer Eight site. In amongst them was an interesting looking set of rules for fighting big WW1 battles; each base equal to an infantry battalion or a tank/MG company. From a read through it looked like the simple mechanisms contained a game which was about juggling limited artillery resources and making sure you had reinforcements in place to exploit or continue assaults. I was intrigued.

I also lacked any suitable WW1 forces to try them out with.

Now I could have just cut up some cardboard counters and gone with those, but where's the fun in that?

So yesterday afternoon I set about producing two armies for the game, from scratch.

The game uses a square grid, of a fixed size - 6 squares wide by 8 deep. The reverse of a couple of the cork tiles I use for 'Struggle Against Everything And Everybody', gridded up into 5cm squares, gave me that. This would allow me to base units for the Pz8 rules on 2cm squares, and still have them looking right.

Now, like most people, I don't have WW1 figures just laying around. But I had card and, more importantly, I had a few plastic hair-rollers; plastic cylinders with rows of spikes that, if viewed with the eyes of a wargamer, look like ranks of soldiers. I won't go into details about how I made things, but I chopped up 1 - 1 1/2cm sections of hair-roller to make infantry bases, a few small offcuts to make MG crews, with the MGs being grains of rice, and layered mounting board to make tanks. Most of the initial chopping and glueing was done on Friday evening, before a session of ferrying children around to youth groups, then I started painting, giving up just after midnight. This morning I finished painting the infantry, and built most of the tanks, having settled on a suitable design the evening before. I also came up with a reasonable design for the MGs and built those. Paper terrain, including all of the trench and barbed wire pieces needed, was downloaded from the Panzer Eight site, glued to card and left to dry overnight, then cut out this morning.

By 2pm this afternoon I had 24 infantry and 6 MG bases for each of a German and British army, 6 British tanks, plus plenty of trenches, barbed wire, bunkers, shellholes, woods and villages. It was all rough and ready, but it was ready to use.

And so I played a game.

I'd produced the sample 1916 forces given in the rules (with some extra infantry for the Germans so that they could be the attacker from time to time), so played a game using those. MGs and tanks are assigned based on a D6 roll; I rolled two dice and selected the higher roll, so both sides had plenty of 'toys' to support the infantry with.

Here's the British army - 24 bases of infantry, 6 tanks and 4 MGs. Remember that each base represents a battalion or a tank/MG company, so that's a lot of troops: 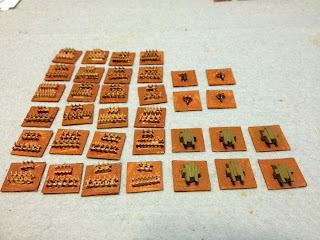 Against them, the Germans had 12 bases of infantry, plus 6 MGs: 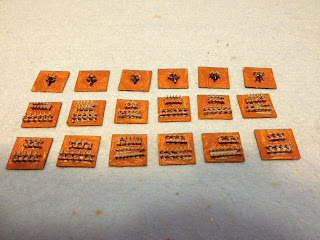 Both sides had 18 sections of trenches, twelve sections of barbed wire and three bunkers. The British defences were really just to deter German counter-attacks. Here's the battlefield; both sides set up their defences in their half of the board, but the British went for a clear space in their front row so they could mass troops for the attack (defences limit how many units can be placed in a square). The Germans went for a single bunker in their first line, with two in the second, the aim being to defend those key points rather than try and cover the whole width of the board. One of the German bunkers was in a village as well: 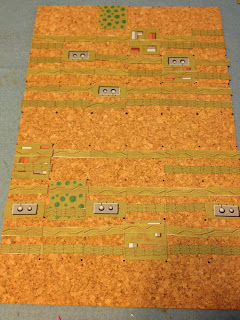 The first part of the game was the preliminary bombardment. The British expended half of their artillery point (AP) allocation on this, hoping to knock out the bunkers and the surrounding defences. Here's the allocation; each counter represents one die roll: 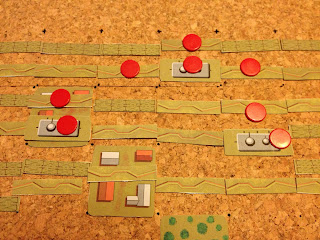 They rolled badly; when the smoke and debris settled only one section of trenches in front of the forward bunker had been destroyed: 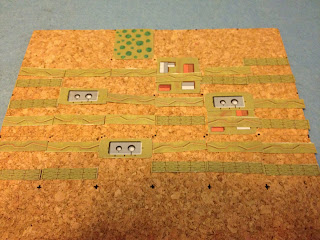 As the defender the Germans placed their troops first. The bunkers were occupied by MGs, and MGs covered the flanks as well. A few infantry bases were held back in reserve, to plug any gaps: 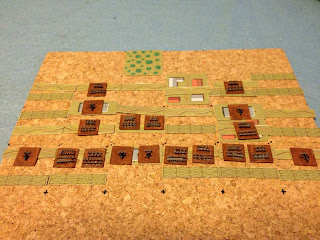 The British massed for the attack; in the centre a formidable group of tanks faced the forward bunker, whilst simple massed infantry was directed at the rest of the defences: 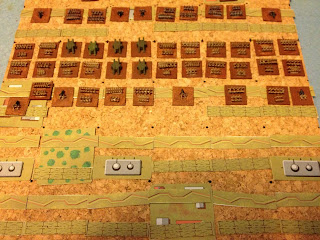 Here's a close-up of the tanks: 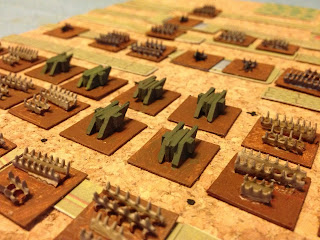 With lots of German MGs in play, and the preliminary bombardment having been so useless, the British plan was to capture the German first line as rapidly as possible with as many AP thrown at it as needed. Unfortunately the Germans were able to match their artillery gun for gun. In the first assault of the game, the British tanks attacked the forward bunker - four AP committed in support, but the Germans matched it with 3. A draw saw both sides lose a unit; a lot of resources used for a stalemate: 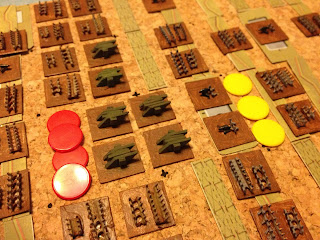 This was the position at the end of the first British turn. On the left a group of tanks had overwhelmed the defenders of one trench, whilst on the right infantry had done the same; British troops were now in front of all three German bunkers. On the far flanks the German MGs had held off the British assaults, inflicting heavy casualties: 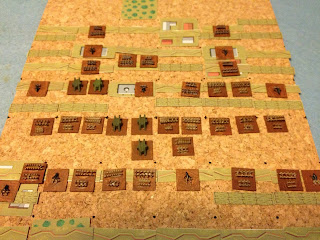 The second turn saw a renewed assault on the German forward bunker, with both sides having reinforced their position with infantry units. Again, despite lots of shelling, the bunker remained in German hands: 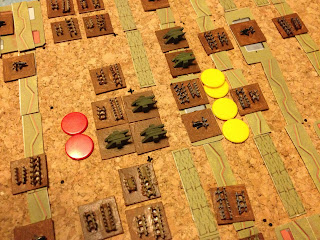 On their left the British made a concerted effort to destroy a German MG company. They failed, losing most of the attacking infantry in the process: 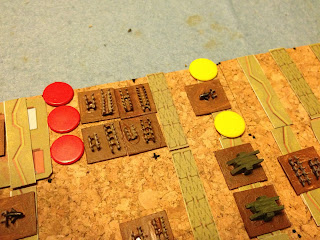 A similar attack on the right saw more success: 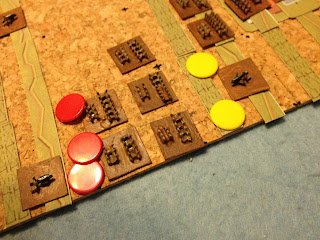 On the third turn the tanks finally took the forward bunker: 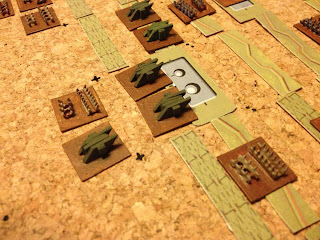 But on the British left the German MG still held up the advance, and it was now reinforced by some infantry: 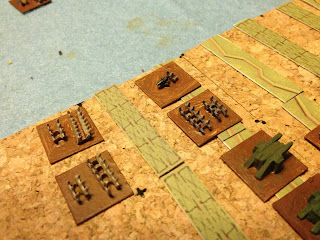 This was the position at the end of the third turn; the British had taken all of the German first line, except for that one stubborn MG position on their left. But the assaults had been costly and they were pretty much out of AP. It was obvious that there was no way they could crack the bunkers in the second line: 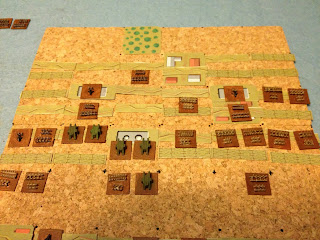 The fourth turn saw the tanks combine to assault the German MG position. The Germans expended the last of their artillery in support ... 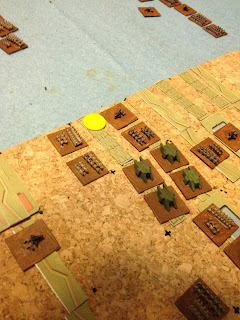 And drove off the tanks! 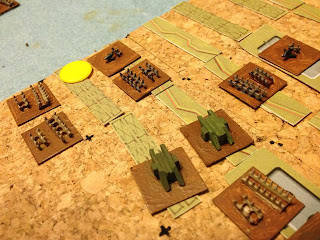 Both sides were now out of artillery support and, finally, on the fifth turn the British took the German MG position with a combined tanks and infantry assault: 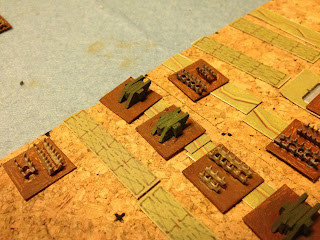 There was little action after the fifth turn; the British were too weak to attack any of the remaining German positions, so capturing the second row was out, but the Germans lacked the manpower to launch a counter-attack - most of their strength lay in powerful, but static MG positions. At the end of the sixth turn the end of game was rolled, leaving this position: 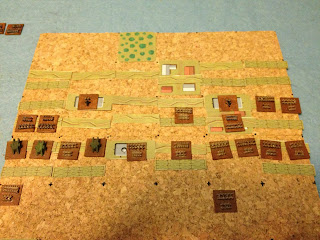 The British right. The German bunker is surrounded, but without artillery or tank support the British stood no chance of taking it; the rules do not allow units in different squares to combine in assaults: 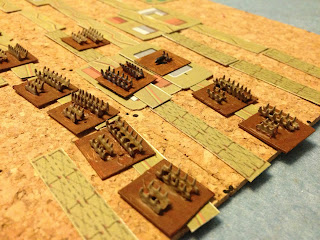 The British left; casualties have left them looking a bit thin on the ground: 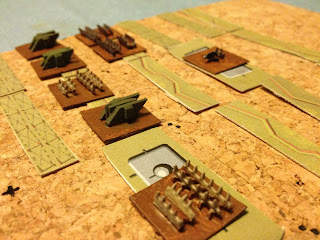 There were few troops of either side in the centre. The British actually have a clear run through the German lines, but with occupied German bunkers on each side it's not a position they can exploit: 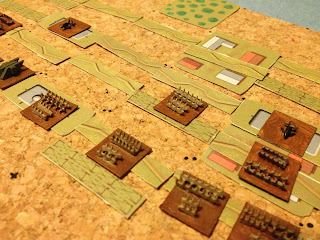 The British casualties; half of their infantry and tanks. The 8 infantry and 2 tanks in the foreground were all lost trying to take the one German MG position in front of the British left flank: 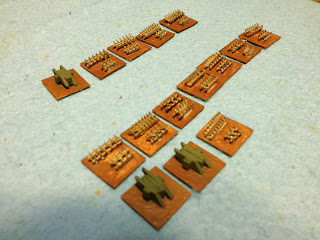 The German casualties; about 75% of their force: 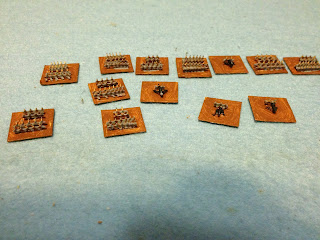 By occupying the German first row the British scored an Indecisive Victory. The forward bunker had proved a tough nut to crack, and a single MG position had basically consumed most of the British resources. But I think it was a mistake to use so many APs on the preliminary bombardments; they would have been better used supporting assaults on the positions rather than trying to remove the positions before the battle started.

The rules gave a very enjoyable and desperate game, and I shall look forward to trying them again. there are a few interesting looking scenarios around as well, some of them covering actions away from the Western Front.

You can get the rules from the Panzer Eight site HERE
Posted by Kaptain Kobold at 18:43