When I started this blog I never thought that I would be doing theatre reviews, but that's what this post is, so it just goes to show that you never know. It's of peripheral wargames interest, so I thought it would make a nice change of pace. Plus, this is my blog and I can do what I like with it :)

Yesterday afternoon I got a phone-call from Eleise at 'What's On In Wollongong' to say that we'd won a coupe of tickets to go and see the Wollongong Community Theatre's production of 'Dad's Army'.

Yes, that 'Dad's Army'. The classic, much-loved British comedy, adapted for the stage.

The performance consisted of two episodes from the series, with an interval between them in which we  took part in a 1940s sing-song. Strangely that was compered by a woman claiming to be (and sounding like) Hyacinth Bucket.

The episodes adapted were 'The Godiva Affair', in which the women of Walmington-on-Sea compete to be Lady Godiva in a town parade, and the classic 'The Deadly Attachment' in which the Home Guard platoon are obliged to guard a German U-boat crew overnight.

It was strange seeing the famous Dad's Army characters being performed by people other than the actors who originally portrayed them, but it worked. The actors managed the difficult job of playing both the character and, to some extent, the original actor. The casting was pretty good such that most looked the part - Pike looked a little to old to be convincing, sadly. Obviously to my ear one oddity was the underlying Aussie accents, but that's to be expected when you go and see a play in Australia.

I really enjoyed Michael Connnor's portrayal of the U-boat captain.

The entire cast and crew did an excellent job of making an entertaining evening out of the difficult job of translating something familiar to the audience, and familiar through television as well, to the stage. Well done.

As a bonus it turned out that someone we knew (through our peripheral connection with the local arts and crafts scene) was in the cast - Sal Harris played a couple of small parts in the play itself, and was the guest artist in the half-time singalong: 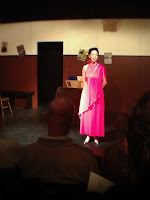 Oh, and I loved the Lewis gun prop.

'Dad's Army' is on at the Wollongong Workshop Theatre until 26th May. You can contact them through the link  towards the top of the post.