Kaiju in ‘Form Line of Battle’ 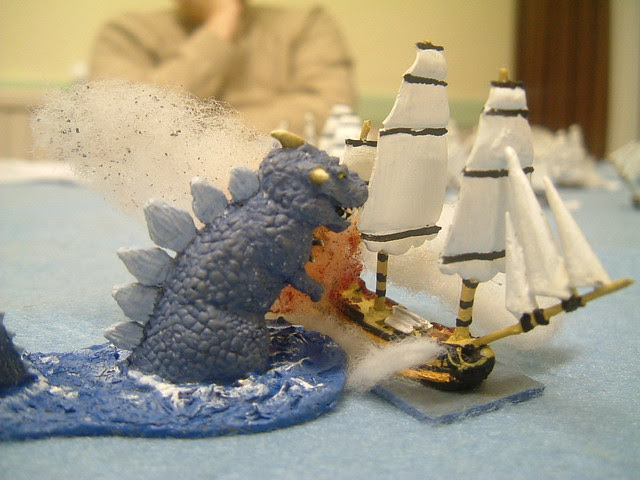 Kaiju are giant Japanese monsters. And it is a little-known fact that navies of the age of sail were in constant danger from them. Those that were around in late 18th and early 19th century were not, perhaps, as large as their counterparts from the Atomic Era, but were still a formidable opponent.

This article looks at incorporating Kaiju into 'Form Line of Battle', as this happens to be my favourite set of rules for this period. You can purchase them from A&A Game Engineering. They offer quick games, limited book-keeping and an unusual sailing system based around random movement distances. It was inspired by the waterline not-Godzilla figure, Torgon, made by Khurasan Miniatures.

For the purposes of these rules the Kaiju is assumed to be a bipedal, semi-aquatic dinosaur-like creature, 2-300 feet in height and capable of breathing fire. Adjust the rules accordingly for variations on this theme.

A Kaiju is controlled by the game system rather than a player. This makes it an ideal opponent for a particularly masochistic solo gamer.

A Kaiju has its own set of three cards in the deck. As with ships the first is for Command and Repair and the other two allow it to move and attack.

Each Kaiju starts with three tokens representing its flame-breath. It can never have more than three of these flame tokens at any one time. In its Command and Repair phase it automatically gains one flame token if it currently has less than three. It also gains additional tokens by eating ships; Kaiju of this period could metabolise gunpowder. Well-known fact.

A Kaiju has 10 hull factors. When they are all lost it sinks beneath the waves, maybe dead, maybe not. Who can tell? 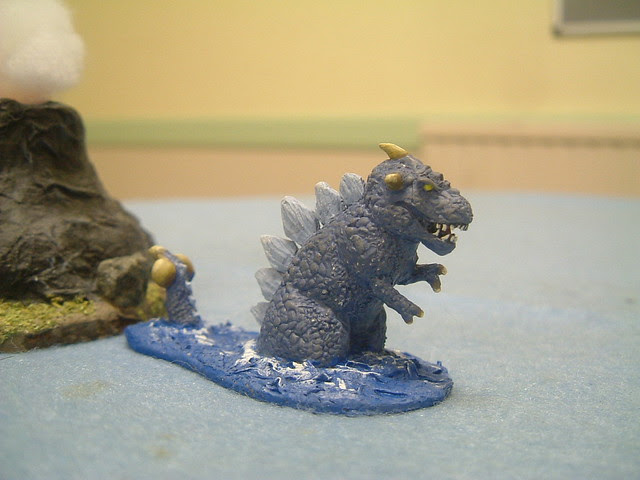 A Kaiju moves 3D6 regardless of wind direction. If there are ships within an arc 180 degrees to its front then it will turn to face the nearest and move directly towards it. If no such ship is present it will expend the highest movement dice roll and turn until it is facing a ship, then move towards it with the remainder of the roll. If it contacts a ship it will stop moving whilst it attempts to eat it.

A Kaiju not in contact with a ship will attempt to engage the nearest ship in its frontal arc with its flame-breath. It must, however, have sufficient charge available to do this.

Flame-breath has a maximum range of 30cm:

The number of fire tokens needed to make the attack depends on the range.

Two rolls are made. First roll a D6 to see if the attack hits:

If the attack hits roll a red D6 and a white D6. The red D6 determines how many ‘r’ hits are scored. Adjust the roll for the range:

Modified rolls of less than zero are treated as zero.

Apply the damage to the target ship normally. In addition one fire is automatically started on the target. If the white D6 scores ‘6’ a critical hit should be rolled (which may start another fire, of course).

If a Kaiju is in contact with a ship it will attempt to crush and eat it rather than use its fire-breath. Roll 1D6 and add one to the roll – this is the number of ‘r’ hits scored on the vessel. In addition a critical hit is automatically scored. The ship is considered grappled and unable to move until the Kaiju is forced to retreat or the ship is eaten. It may fire, however.

A ship in contact with a Kaiju that has no broadside factors remaining, is struck or is sinking is automatically eaten.

Eating a ship takes a full Movement or Command and Repair phase, during which the Kaiju remains in place. The ship model is removed, and the Kaiju gains fire tokens based on the size of its meal:

Resolve firing on a Kaiju exactly as if it were a ship. However only damage to hull factors and critical hits have any relevance; other damage effects are ignored. Thus a hit that scores ‘r’ will have no effect, unless a double was rolled in which case a critical hit is scored. A hit that scored ‘2r’ will score one point of ‘hull’ damage. And so on.

A ship which is in contact with a Kaiju gets a +1 to its broadside roll for each remaining crew factor. This represents the effect of marines firing at the Kaju and is, quite frankly, a bonus any ship in the grip of a Kaiju desperately needs.

A Kaiju which has taken at least half of its Hull hits loses 1D6 from its movement.

A Kaiju has a special critical hit table. Roll 1D6:

Submerge – The Kaiju lets go of any ship it is trying to eat and is removed from the table, its position being marked. In each subsequent Kaiju Movement phase roll a D6 – on a 5+ the Kaiju reappears. Roll 1D6 for each Movement phase it has remained submerged (including the current one); it appears that many cm away from the point at which it originally went under the water in a randomly determined direction. It may not move or attack in the phase it reappears. A submerged Kaiju does regenerate fire tokens during its Command and Repair phase.

Retreat – The Kaiju immediately releases any ship it is trying to eat and is moved 1D6cm away from the firing vessel. A Kaiju can retreat any number of times.

The rules above should work with multiple Kaiju. Give each one its own set of cards and flame tokens, and treat them as a 1st Rate for target purposes.

To see pictures of an actual game CLICK HERE.
Posted by Kaptain Kobold at 10:00