The Battle Of Cuautla

In May 1911 Mexico was aflame with revolution. In the north troops under Madero and Villa were winning a series of victories that were forcing the president and dictator of Mexico, Porfirio Diaz, to consider his position. In the south Emilio Zapata was also in rebellion. He realised that unless he held major towns in the area he would have little to bargain with at the end of the fighting, so attacked the fortified and garrisoned city of Cuautla. He had 4,000 troops, ill-equipped and unused to the kind of fighting required to take a city by assault. The city was defended by between 350-400 men of the elite Fifth Regiment of the Federal army.

The stage was set for six days of terrible battle, which left the Fifth Regiment decimated and Zapata in control of the city. The battle was fought at close range, with machete and bayonet in many cases, and saw the use of gasoline to burn the Federal troops out of their positions.

I decided to base a  game of 'Struggle Against Everything And Everybody' around this battle, pitting a force of Zapatista rebels against a series of Federal defence lines in the close confines of a city. Rather than fire I decided to allow the attackers to use dynamite; Pancho Villa's troops used this weapon in a similar assault at Ciudad Juarez, blasting from house to house to avoid artillery fire.

I used a very small grid for this game, 5 squares wide by 10 deep (so 15cm x 30cm), with an 11th row holding two objective squares - The Plaza. Ten Zapatista infantry units, with inferior firearms, had twelve turns to take both objectives at the other end of the board. The Federal defenders were determined randomly; the first time a Zapatista unit came within view of each of rows three, five, seven and nine, their occupancy would be determined, with most of the defenders being infantry but the option for machine guns or even artillery. The Plaza was defended by two infantry units, with an artillery unit in the gap between the two objectives.

This was the setup. The first five Zapatista units started on row one, with their places being taken by the remaining five units as they advanced: 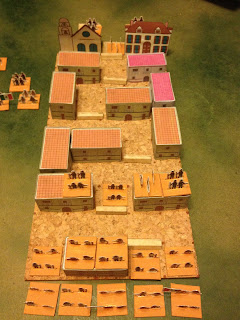 Buildings were from the Junior General site. The two buildings with pink roofs were the result of a printer ink malfunction, but it seemed a shame to waste them.

Here's a close-up of the Zapatistas about to begin their assault: 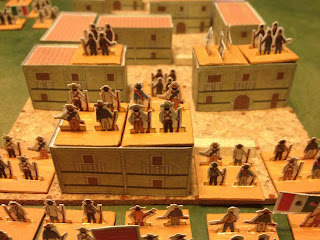 And here's the Plaza. The buildings in front of it are almost certainly defended by Federal troops: 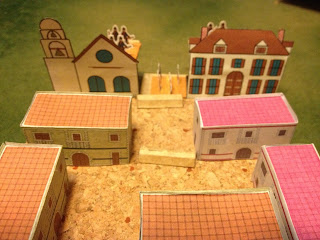 The position at the end of the second turn. The Zapatistas had captured some of the third row by this point, and were starting to fire upon troops defending the next line: 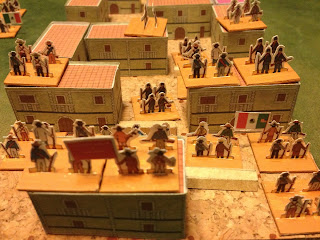 Zapatistas use dynamite to remove a troublesome machine-gun position: 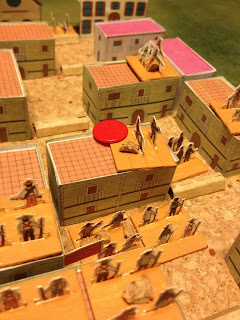 The third line of Federal defence was under attack by the end of the fourth turn: 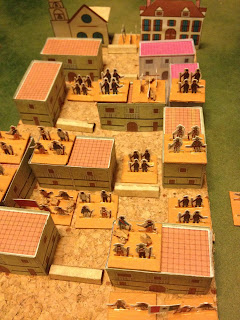 Not long afterwards the first Zapatista unit reached a position where they could attack the Plaza: 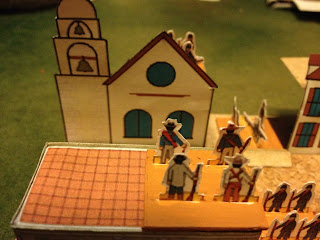 Meanwhile a single Federal unit was still holding out on their first defence line, delaying a couple of Zapatista units: 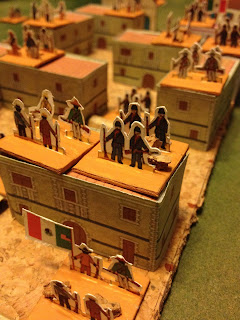 The high-water mark of the Zapatista attack. Their units were attacking the last line that stood between them and the Plaza, but mounting casualties took their toll and blunted the assault. Any units which broke through and got within range of the Plaza itself were picked off by concentrated fire from the defenders and the artillery. The left flank had done well, having met little resistance, and the centre hadn't had too bad a fight, but the right flank had been held up by two particularly stubborn defenders: 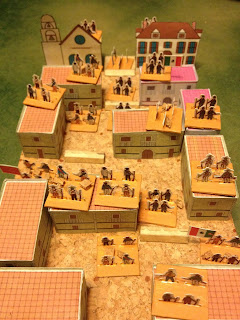 Some of the stubborn defenders on the right - the uniforms are those of the Rurales; I used them because I'd run out of Federals: 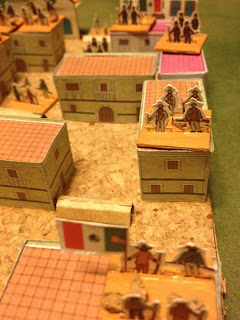 The final assaults break on the Federal defences; there were still a few Zapatista units by this stage, but most of them only had one hit left: 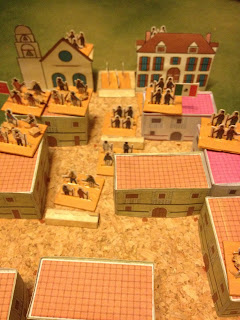 The end. The last Zapatista unit made a stand under heavy Federal fire until it was wiped out: 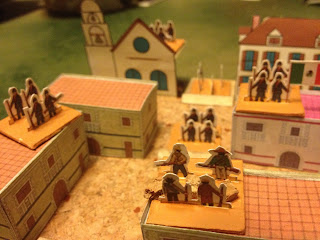 The Zapatista casualty pile at the end of turn 11. Their surviving unit had one hit left and had only advanced as far as the third row: 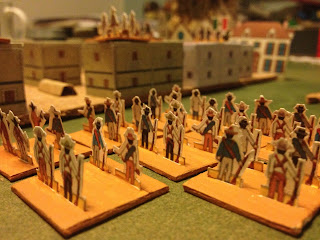 This was a tense, vicious game, made all the more interesting by the tight, restricted board. The rules held up well.

I will probably try it again with the same set-up, but it's possible that I had the frequency with which Federal units appeared too high, making their numbers a little high. Technically the Zapatistas should be able to concentrate their forces against each defence line, defeating the Federals in detail, but the ticking clock means they can't rely on this as a tactic; they have to push forward with speed.

The Federal defence was helped by two stubborn units on one flank who refused to die, and also their good fortune with initiative; they won it on the majority of turns, allowing them to inflict heavy casualties before that turn's assaults came in.

I'll probably use the dynamite rules again (the Zapatistas had four tokens each of which would give them a bonus in a single close-range firefight or a close assault against a building or allow them to ignore the movement effects of a building). If I wanted to simulate their use of gasoline I might allow them to, once per game, attack every unit in a given row of the board with, say, four dice, ignoring cover. We'll see.

Email ThisBlogThis!Share to TwitterShare to FacebookShare to Pinterest
Labels: mexican revolution, morschauser rules, report, struggle against everything and everybody