I used up the last of my hair-rollers to make a few more stands for the Pz8 WW1 divisional rules - German and British cavalry: 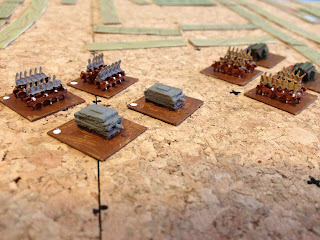 I also made a couple of A7Vs for the Germans; I may make another British Mk IV/V and paint it in German colours as well, as the Germans tended to use captured British tanks. Oh, and although you can't really see it I painted the tracks on the British tanks, and put a coloured dot on all troop bases to make identifying their nationality easier - red for the British, white for the Germans.

Now I have to see if I can source some more hair-rollers of the same design I have been using. The ones I used for this project (and I did everything with 2 1/2 rollers, in case you were interested) were the last of a batch I bought 25 years ago when Andy Callan first published his classic 'Hair-Roller Armies' article in Miniature Wargames. I used to have a pair of armies for the Zulu Wars, but they never got used because, at the time, I couldn't come up with a suitable set of rules. Now, of course, I can think of a number of ways of using them, but the armies got binned years ago as part of a periodic tidy-up.

Anyway, I'm hoping the design I used is still around and available in Australia.

After playing the game I wrote up yesterday, and a few others covering slightly different scenarios (these games play fast) I am considering some rules tweaks:

(i) After all assault totals are determined, the attacker rolls a dice: on a 1-2 they subtract one from their final score and on a 5-6 they add one. This makes all assaults slightly more unpredictable, especially ones which don't involve artillery and/or MGs; at present these assaults have no random element at all.

(ii) If a square is assaulted more than one during a player turn, it suffers a -1 from its defence total for each assault after the first. At present you can't co-ordinate assaults from different squares; this change allows an attacker to put a square under pressure through multiple attacks.

In addition, I have the defender declare how many AP they are adding in support of an attack before the attacker does; AP are a tricky resource to manage, especially for the attacker, and this gives them a very slight edge in that respect.
Posted by Kaptain Kobold at 23:00